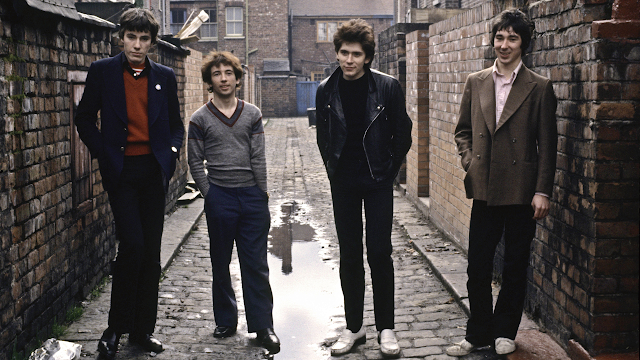 "Punk gave me the strength to think, "Yeah, you can stand up and be counted, and do what you want in life, and not be hoodwinked by it all," in a simple, very general sweeping way" - Steve Diggle

Another Music In A Different Kitchen (1978) 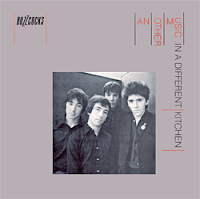 The Buzzcocks, from Manchester, were one of the first punk bands to start the whole “post punk” thing, with slowed-down, almost one-paced “Krautrock” influenced often intransigent songs. This, their first album, from 1978, was essentially a punk album at the beginning, before moving into a slightly different, more introspective sound in its second half. I have to admit that they are not my favourite punk band in the slightest, coming quite low down in the list, so apologies to the many for whom they were much more important. It is an enjoyable album, but it just did not have the personal connection for me that it did for others. Anyway, here goes with their retrospectively interesting debut album:-
Despite having a reputation as a band that issued quality singles, The Buzzcocks decided to put out a credible album without much single material on it. Credit to them for that. Fast Cars has a breakneck, funky intro that suddenly almost comes to a standstill before going all “post punk” and then reverting to punk type again with an insistent and punky riff and Pete Shelley’s recognisable vocal bleat-whine. No Reply continues the vibrant punky effervescence. A hundred miles an hour, as indeed is the next one, the frantic You Tear Me Up. All throbbing bass lines and buzzsaw guitar riffs. Shelley’s voice was weak, let’s be honest, but it somehow suited these short, sharp punk thrashes.
Get On Our Own ploughs the same furrow, but with a great guitar bit at the end, while Love Battery has a killer Ramones-style guitar intro and a fast beat that almost threatens to completely lose control. There was not much you could say about this stuff, it was what it was. Sort of The Sex Pistols meets The Ramones. For a lot of people, The Buzzcocks were the best punk band around. Not for me, they lacked the depth, variety and potential to diversify of The Clash or The Jam, the musical skill of The Stranglers, the goofy appeal of The Ramones or the vital, political attack of Stiff Little Fingers.

Sixteen sees the first slowed-down, “post-punk” and “Krautrock” influences, with its metronomic, unchanging grungy beat, clunking guitars and sparse beat drums. While the pure punk of the first five tracks hasn’t actually dated particularly well, Sixteen still sounds pretty good today. It has more hidden depths to it. I Don't Mind was a single, and a good one too. A vigorous riff, catchy verses and chorus and overall a big, powerful sound. Simply a great punk single. Fiction Romance is another thumping, solid post-punker with that archetypal sparse, two beat drum sound. Krautrock loved these insistent, unchanging rhythms and Pete Shelley liked using them here, as indeed did old bandmate Howard Devoto with his new band, Magazine. It is these more varied, diversified numbers that are more interesting to listen to today. Autonomy has a crunching, mid-paced beat and another energetic post-punky riff. It is cut from the same cloth as the previous few tracks.
I Need

, however, is a return to madcap, headlong punk thrashes though, with a a rant about needing “sex, drugs and cash”. It has an excellent, madly melodic bass line at the end. Moving Away From The Pulsebeat is a strident, extended, dark and intense close to the album. It would not have sounded out of place on a Siouxsie & The Banshees album. It even has a kind of “drum solo” on it. On a punk album? Surely not. It is great though, particularly the the guitar joins in. Great stuff.
** The bonus edition has the wonderful non-album singles Orgasm Addict and What Do I Get?, its excellent 'b' side, Oh Shit and a great BBC Session Pulsebeat from the John Peel Show.
Love Bites (1978) 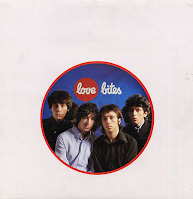 The Buzzcocks' second album was their most popular, yielding a big hit single and lots of punk-post punk angsty anthems.
Real World kicks things off with a typical post punk drum beat and edgy guitar riff and some earnest lyrics, while everyone knows Ever Fallen In Love (With Someone You Shouldn't Have?) and it was a true punk anthem without the anger. The late Pete Shelley's high-pitched slightly lisping voice was not really picked up on at the time, neither was his bi-sexuality. It was simply considered a great punk record, ideal for fist-pumping and pogoing, which it is.
Operator's Manual is a half punk, half industrial clunker of a track, full of stark riffs and dense, rolling drums, backed by a wailing, toneless vocal. Nostalgia is pretty standard punk fare, fast riffs and bleating vocals that sounded angry even if they weren't. Despite the audible energy of the group's material, there was always a gloominess to them. Just Lust had a frantic punk beat and now typical Buzzcocks refreshing honest lyrics about youthful sex and the lust of the title. It builds on the tradition created by Orgasm Addict in the previous year.Sixteen Again has a Magazine-style riff and more trademark Shelley lyrics, getting nostalgic for just a few years previously.
Walking Distance is an infectious new wave instrumental, full of excellent guitar, bass and drums. Love Is Lies is another cynical Buzzcocks love song. This is what The Buzzcocks were all about - they didn't sing about social issues, corrupt Tory MPs or violence. They sang, on the whole, about love and its attendant problems. Personally, I had other punk groups I preferred more - The Clash, The Jam, The Ramones, Stiff Little Fingers, but I understood where The Buzzcocks were coming from, I think. Nothing Left is one of their most obvious punk meets post punk numbers, with one of those edgy, drawn-out intros and that sonorous, thumping, insistent drum backbeat. It inspired many a post punk band. It even has a slightly dubby bit in it. E.S.P. has a killer, searing riff to it. It has a long, minute-long fade out, though, for some reason. Late For The Train is another nascent post-punker, clocking in at five and a half minutes (not common among punk groups). It has another long, sonorous, guitar-driven intro and you wonder when the vocals are going to come in. They never do. An album with two instrumentals on showed that The Buzzcocks were stretching the two/three minute angry punk song thing considerably, pushing the boundaries already, leaving their singles as singles and their albums as more serious creations.
A Different Kind Of Tension (1979) 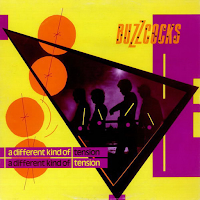 For me, the two previous Buzzcocks album, Another Music In A Different Kitchen and Love Bites are much better than this one, which is slightly formulaic and repetitive in places, particularly the old "side one", which contained the punkier material. It already sounded somewhat old hat, even by late 1979, unfortunately. For some people, this is their best album, but personally it lacks something in comparison to the others. It sounds a bit tired, to be honest, despite the lively nature of the material. If you think about it, The Buzzcocks had just a couple of great years - 1978 and 1979 - two good albums, and this ok one. Their legacy has been far greater than the sum of their parts, however. Forty years later, they are still remembered with respect for their contribution and subsequent influence.

Paradise is a typical Buzzcocks punker, with the late Pete Shelley's instantly recognisable bleating vocals and a solid fast punk beat. It actually sounds comparatively dated by now, though, compared to some of the post-punk material they had been dabbling in on previous albums. Sitting Round At Home moves between chugging verses and a breakneck, punky chorus. You Say You Don't Love Me is a classic Buzzcocks punky love song. You Know You Can't Help It is pretty much Buzzcocks punk by numbers. Mad, Mad Judy is full of riffs, bass and growling punk attitude and I can't help but like it. Raison D'être is also an appealing staccato-beat, riffy punky track. In fact, though, listening to this side over and over, it has hidden depths and I have got into it all over again. I Don't Know What To Do With My Life is a sort of Buzzcocks meets The Sex Pistols to kick off the old "side two" and Money gives us the first taste of post-punk industrial rhythms, such as were explored on the previous two albums. Hollow Inside is in the same vein, with some impressive drum parts and bass lines. It is here that the album becomes a little more interesting and more experimentally progressive. I much prefer this side, despite my liking for punk. I feel that this was far more futuristic material than simply retreading old punk footsteps.
A Different Kind Of Tension is sort of post punk meets new wave with some robotic vocals floating around. Again, it has something about it, although it does sound pretty dated now. The tracks are longer though and more in step with the whole post punk thing. Nowhere is this more apparent than in the seven minute I Believe. Seven minutes? From a punk group in 1979? It was certainly unusual. It doesn't get boring though, in its punk meets Joy Division sort of way.

** There were no singles on the album - the two that were released around the same time were Everybody's Happy Nowadays and Harmony In My Head, both of which would have improved the album by their presence. The 'b' side Why Can't I Touch It? is a great track, and a real shame that it was not on the album.