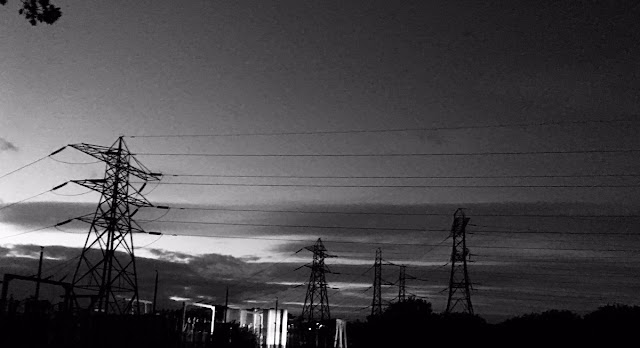 Collected here are ten of my favourite post punk albums, from the period when the energy of punk morphed into bleak, grey soundscapes and doom-laden lyrics. They are not listed in any particular order of merit.

* To read detailed reviews of the albums and artists, click on the album cover images. 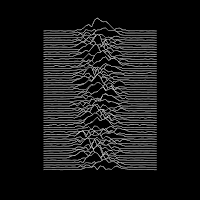 I distinctly remember first seeing Ian Curtis singing with Joy Division on "The Old Grey Whistle Test" for the first time and just thinking "what he hell was that?". This totally wired-up, frankly disturbed-looking weird bloke jerking, as if electrocuted, to a dense, throbbing sombre beat. It all seemed most bizarre and it took me a while to get into Joy Division. Indeed, I have probably appreciated them more in the last twenty years or so than I ever did at the time, when, for a while they simply weren't for me. That said, this was a completely innovative, ground-breaking piece of work and has rightly been acknowledged thus in the subsequent years. Magazine and Public Image Ltd had started the whole "post punk" thing, but this pretty much wrote the handbook. Dark, brooding, industrially heavy rhythms. Scratchy, metallic guitars. Thumping, sonorous drums. Rumbling deep bass. Introspective, creepily haughty-sounding vocals. It is all so atmospheric and evocative of those dark evenings of 1979-1981. Even the cover is monochrome and full of foreboding. 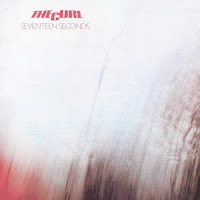 Never mind post punk, this, The Cure’s second album, has been viewed retrospectively as the first gothic rock album. A genre was born. Having been playing guitar with Siouxsie & The Banshees, Robert Smith  came back wanting to deliver a sound similar to that of Steve Severin and Budgie. He managed it too, serving up a supremely dark yet strangely classy album. It was also supremely influential, on bands like The Stranglers, contemporaries Joy Division and Echo & The Bunnymen and, in reverse, on The Banshees. It is a short album - which given its sombre soundscapes is possibly not a bad thing - and it is one that I have to say that I really like. It has a great sound quality to it and bags of atmosphere. It has to be regarded as one of the great, if not slightly overlooked, early eighties albums. 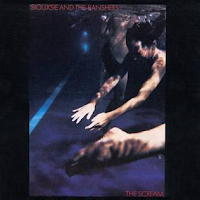 Having been around for what seemed like ages, Siouxsie & The Banshees finally released an album, after a successful single (not on the album) in Hong Kong Garden, from a few months earlier. It had taken a long time for the band to get a contract, eventually getting one with Polydor as a result of fan-led hype and media pressure, which was surprising, considering the band were musically quite competent. It was a strange album - intense, dark and totally uncommercial. They certainly lacked the instant appeal of The Jam, The Clash, The Ramones or The Stranglers and also had no real Ian Dury or Elvis Costello-style "crossover " potential. They were "post punk" before the term had even been invented and their image contained a lot of inspiration for the new romantic movement, although in no way did it have the preening "look at me" narcissism. Siouxsie Sioux, hidden behind lashings of makeup, was dubbed the "Queen of Goth" (coining another new term) and, of course, the "high priestess of punk", while the band members remained faceless and down-dressed. 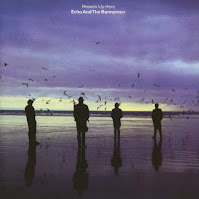 True Bunnymen aficionados (not me, I’m just an occasional dabbler) consider this to be the band’s best album, one that best exemplified what they were about. I know what they mean - the album is full of dark, post punk, studenty sounds and ambience. It is certainly not a listen for a sunny summer’s afternoon, best suiting a miserable, dark November evening. The album’s cover is perfectly suited to the music. Despite all the vibrant, expressive new romantic foppery flouncing all around, in 1981 this, along with Siouxsie & The Banshees and Joy Division was just as much the sound of the time. 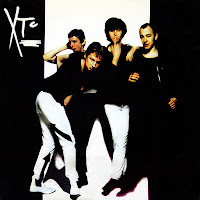 1978 was an exciting time for music - acts considered part of the punk scene such as The Jam, The Buzzcocks, The Boomtown Rats and Elvis Costello were breaking through into the charts and appearing regularly on Top Of The Pops, the old supposed "dinosaurs" were still putting out good stuff, seemingly oblivious to punk and disco, although reviled by many, was exciting and vibrant. Why then, did the next batch of "punks" to appear on the scene decide not to be politically-motivated rabble-rousers but come across as somewhat dour, faceless "intellectual" geeks, producing music that was actually quite dull? This sort of went against the supposedly "up and at 'em" excitement of punk, didn't it? Anyway, within a short period of time it had led to post punk and a fair amount of supposedly punk bands sounded like Swindon's XTC. The key to the sound was a monotonous, rumbling bass sound, metronomic drums, quirky, jumpy vocals and a general darkness of ambience that prevailed, however fast the music may have been. In many ways, this, XTC's debut from 1978, was typical of this sort of thing, a sound that had given us Magazine and would soon give us groups like Gang Of Four and the pre-synth version of Ultravox. For me, a lot of the untramelled excitement of punk was already being lost as groups like this became ten a penny. To be fair, XTC were a bit better than mere also-rans, but I'm sure you get my drift. Indeed, they undoubtedly influenced those very groups, so they were unfortunate in that they are rarely given credit for that. 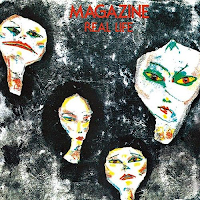 Magazine’s Real Life, from early 1978, has a case for being one of the first “post punk” albums. From the opening haughty synthesiser sweeps and jangly guitar of Definitive Gaze, this was no two minute aggressive thrash of a punk record. Despite bug-eyed singer Howard Devoto’s Rotten-esque sneering delivery there was no anger here, no rage against the system, just earnest, introspective self-questioning and paranoia. The music was, at times, melodic, almost classically-influenced in its keyboard pieces. It was also, however, brooding, dark, dull and strangely monotonous. I remember being at a Magazine gig in 1979 and thinking how incongruous the crowd of pogoing punks were. The band’s performance bored me rigid. This was arch, serious “new romantic” music two or three years early. I wanted to be punching the air and rebelling, not worrying about my own insecurities. Listening to it over later years, though, I have come to something of a greater appreciation of its merits. 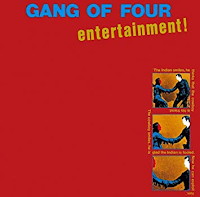 As a punk, back in 1979, I certainly wasn't keen on "post punk". I saw many bands like this live - Magazine, Gang Of Four, Joy Division, Doll By Doll, the original Ultravox and so on. They actually left me quite cold at the time - earnest, miserable, introspective student types playing bleak sounding music and singing in detached, dull voices. I wanted proper funk excitement - The Clash, The Jam, The Ramones, Stiff Little Fingers and the like. Unfortunately, they were morphing into something else too. True punk, 76-78 style was over and many bands were like this by now. Siouxsie & The Banshees always had been, and The Buzzcocks too, to be honest. "Post punk", was in many ways, punk with less of the hundred mile an hour pogoing numbers, but the same bleak outlook and dense, urban guitar-driven sound. In later years, I have come to appreciate these albums a lot more and every now and again I listen to this. I certainly wouldn't have done in 1979. 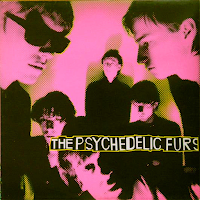 This is a leading example of a fully-fledged "post punk" album - full of influences from David Bowie's late seventies work and German "Krautrock" bands Neu! and Kraftwerk in places with a little bit of early Roxy Music thrown in. Funnily enough, vocalist Richard Butler's gruff, sneering tones were very punk as opposed to "new romantic" haughty. The latter style hadn't really taken off yet, so a funky PIL-esque tone was still de rigeur. The album was produced by Steve Lilywhite, who went on to produce U2. You can see that this influenced those early U2 albums in places. 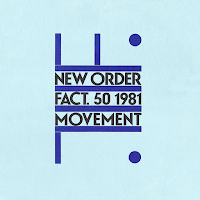 From the unfortunate ashes of the ground-breaking Joy Division came New Order, without deceased vocalist Ian Curtis. His stamp and legacy is still all over this album, which still retains the dour, introspective, post-punk atmosphere of Joy Division's two albums. However, from the first upbeat notes of the vibrant Dreams Never End there is a slightly discernible shift in mood. A more effervescent liveliness that, of course, would see the new decade end with the band sunning themselves in Ibiza as kings of the burgeoning dance club scene. The post-punk sombreness is still not far from the surface at all on this album, though, exemplified on the mournful, haunting Truth. A lot of the group's material is still ghostly and mysterious. To my taste, just as it should be. If I am honest, I much prefer this, and the Joy Division stuff to all that hands in the air dance material, man. To say nothing of that dreadful football song. Give me dismal student music any day. 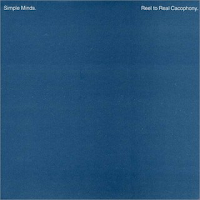 After the patchy, vaguely pretentious and derivative debut album, Life in Day from seven months earlier, Simple Minds produced a genuine post-punk album that was a world away from its predecessor. Yes, there are lots of influences on here, as there certainly were on the first album, but on this outing the group are beginning to forge some sort of identity of their own. This really is a much more fulfilling album than the first. Jim Kerr reckons he listened to Joy Division's Unknown Pleasures after recording the first album and was blown away. You can tell. There are influences all over this, sure, but they are well-chanelled influences. The group still have their own sound. Their swirling, melodic keyboards, the occasionally dubby, reverbed guitars, and Kerr's now much deeper voice. It is a shame that the group tarnished their credibility by becoming a bloated "stadium rock" band a few years later, because this was genuinely good stuff.