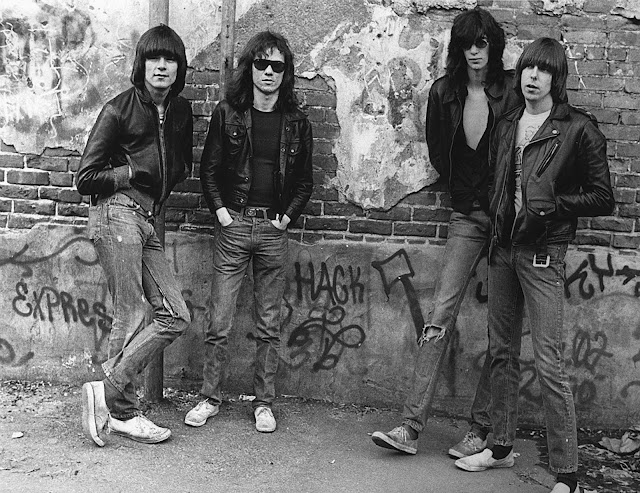 These are The Ramones' studio albums, together with introductions from my longer reviews (which can be accessed here) :- 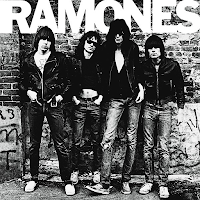 In 1976-1977 the world had not seen anything like The Ramones. Who were they ? What were they? How did they come about? Let’s be honest, The Ramones were an extremely odd bunch, like the four geekiest/sociopathic kids at school gathered up in one group. But what a revolutionary sound they produced. For such a beautifully simplistic band, their influence has been immense, musically and culturally. Ramones T-shirts are still de rigeur, all these years later. The Ramones took the essence of rock 'n' roll, surf pop, girl groups and strip it right down to the basics - guitar, bass and drums and made it louder and breakneck fast. It was brash, silly, uplifting and bloody well in your face exciting. Bizarre lyrics, buzzsaw riffs, thumping drums, frantic songs that rarely exceed three minutes (if not two). Music had never really seen or heard anything like it. It really was a ground-breaking album in its totally goofy simplicity. It was the very antithesis of all that "prog rock" indulgence. Short, sharp and machine gun loud. As I said earlier, they were odd characters too - four weirdos masquerading as "brothers" with the "surname" Ramone - grotesquely tall and spindly Joey, looking like some strange wading bird (but the most sensitive and intellectual of the group); borderline psychopath druggy Dee Dee; disturbingly right-wing, reactionary Johnny and drummer Tommy who you always felt was the slightly detached, more "normal" one. All wearing leather jackets and torn jeans, they were a fashion sub-culture personified. They had geeky obsessions with comic books and their imagery, Nazism, Communism, mental health and, surprisingly, sunshine and summer surf fun (odd because they all looked pretty unhealthy). They also had long hair, something supposedly anathema to punks. Yes, a decidedly odd group. 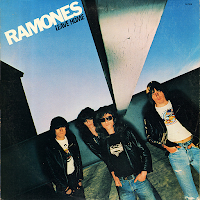 The Ramones hit on a formula with their seismic debut album from 1976 and they basically stuck to it here - two minutes or less per song of guitar, bass and drum all-out attack on your senses matched with oddball lyrics and a few pinches of tongue-in-cheek humour. A slight difference to be found here in comparison to the first album is that there were a few more surf pop-ish good time numbers making it a bit more commercial an album in places. Tommy Ramone's drums are more loose and catchy in tone on this album, almost swing-ish, more Mony Mony in style. Check out California Sun and Suzy Is A Headbanger as examples. Released in early 1977, this was the album where the formula from the iconic, breakthrough debut album was improved upon a bit, in terms of studio and production levels. It doesn't lose any of the first album's rough and ready power though. Just a bit more polished and some of the songs are a bit more poppy and tuneful. 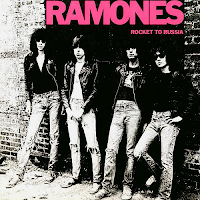 The Ramones had fully established what they were about by this album's release in late 1977, building up a sizeable cult following within the punk sub-culture, playing frenetic gigs to excitable crowds of pogoing punks. Veterans from their first album like myself knew what we were going to get by now and eagerly waited its release. It didn't disappoint. There were the "brothers" on the cover, in leather jackets and jeans (they were never seen in anything else), with pink writing this time (the previous albums had been black/white and blue respectively. The next one would be yellow, the one after that red). The music would be the now expected mix of buzzy, frantic punk, poppy, catchy surf pop and a couple of slow "ballads". The Ramones doing ballads? Wow. Even more so than the previous album, Leave Home, this was the album where breakneck punk fully met surf pop and goofball lyrics complete the "chewin' out a rhythm on my bubblegum" pleasure. Surf pop. Power pop. Call it what you will, it is there in the wonderful Rockaway Beach, the cover of Surfin' Bird, in Ramona, Locket Love and the cover of Do You Wanna Dance. 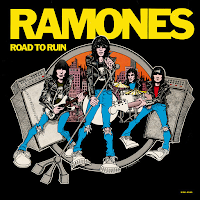 Released in 1978, "Road To Ruin" followed three iconic "1-2-3-4" Ramones albums of punk rock heaven. By now, they felt the need to show they weren't not just three-chord wonders. The "new wave" had begun, and acts like Elvis Costello, Blondie, Talking Heads, The Jam and The Clash were diversifying and showing considerable songwriting skills. Maybe The Ramones felt they had to compete in similar fashion, or maybe they just fancied trying something different. Maybe the record company wanted them to shut more units. Original drummer Tommy Ramone had been replaced by ex-Richard Hell & The Voidoids drummer Marc Bell (who became Marky Ramone), while Tommy went on to production duties. Personally, I preferred Tommy's more melodic drumming to Marky's powerhouse thump. Production-wise, though, Tommy added something because this was the group's most polished sound thus far. This was partly due to the considerable overdubbing of guitar sounds and keyboards together with re-mixing that left behind the raw, edgy sound of the debut album in particular. The days of pure punk were over, it seemed, as The Ramones tried to make it bigger, commercially. 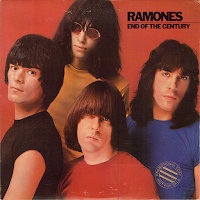 In 1980, The Ramones brought in the production genius that was the legendary Phil Spector for this, their fifth studio album. They had diversified just a little on their previous album, Road To Ruin, and this outing saw them broadening their horizons even more while still remaining true to their punk roots. The commercial success they craved (despite their unknown's ethic and fanbase) was still somewhat eluding them. Given their love for sixties pop you would have imagined that Spector would have provided the necessary difference to make their chart dreams reality. To a certain extent this proved to be the case and with Spector's help, they laid down a killer cover of The Ronettes' Baby I Love You, although nothing could hope to compete with the original. Why, it even included orchestration. Strings? On a Ramones record? Wow! They appeared slightly sheepishly on Top Of The Pops singing it too. Why there is even an acoustic guitar here and there too. 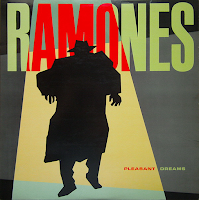 This was a “crossroads” album for The Ramones. Hiring ex-10 cc guitarist Graham Gouldman to produce the album, hoping for more commercial success, it resulted in conflict between band members Joey and Johnny, the latter who wanted the band to concentrate on the raw punk of their first three albums, whereas the singer preferred the more poppier sound to be found here. It seems Joey won out in this case because this is a Joey album all day long. This album is really nothing like the first three albums at all (certainly not the first two). Although you can still tell it is The Ramones, even Joey’s voice seemed to carry a different timbre now, trying to be more like his beloved 60s pop. Music media reaction, on the whole, was negative, feeling the band had “sold out” “gone pop” and the like. This is slightly unfair, one feels. What were The Ramones supposed to do? Produce annual replicas of their first album for the foreseeable future? Had they done so, they would attracted negative feedback for doing just that. Personally, I have always quite enjoyed this album, although I fully accept that the previous five are the five essential Ramones albums. This is the unfortunate point where their output becomes non-essential, however. 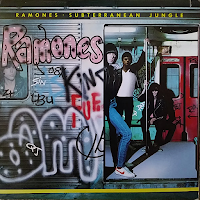 This is a most underrated Ramones album, recorded at the height of a fractious atmosphere within the group. It is very much a Joey Ramone album, concentrating on the sixties pop style he loved so much. The songs are deliciously hook-laden and the guitar far more melodic than typically punk. They would evert to punk basics for the next album, Too Tough To Die but this one should not be overlooked. It is a joyous, energetic singalong romp. 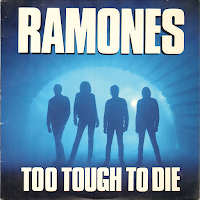 By 1984, punk had long since expired, new wave too, even new romanticism's make-up was running. What was around was actually not too much at all. What was needed was an antidote in the now increasingly irrelevant Ramones giving us more of the same. After a brief flirtation with slow ballads every now and again, they returned to their no-nonsense punk roots on this muscular, uncompromising album. Indeed, they certainly were too tough to die. Great cover too. 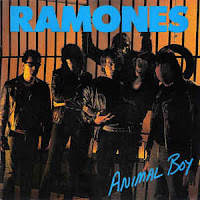 This was very much a Dee Dee album, even more so than Too Tough To Die, although it is not without a few surprisingly good tracks. Indeed, I prefer it to that album. Poor old Joey was becoming a bit marginalised, though, and he was not on all the tracks here. This was his lowest point as a Ramone. 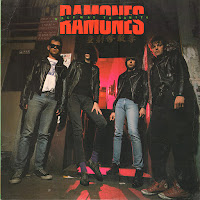 Another Dee Dee-dominated album but also one that is a little underrated, slipping unnoticed under virtually everyone’s radar. It features a bit more musical variety than on many other Ramones albums (comparatively). Not too much, however, it still chugs along in typical later-era Ramones fashion. I prefer Animal Boy on reflection, I think, although a combination of the best of both of the would make for a good album. 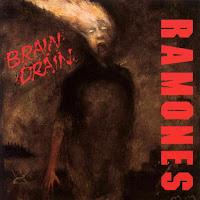 This was heralded as The Ramones’ “comeback album” and had music writers pulling out their “return to form” cliches by the score. They had a bit of a point, though, as it was a big, brash heavy rocker of an album that seemed to have the group more as one again, coming bursting back out of your speakers. As it happened, though, it was to be Dee Dee's last album, he left after its release. It also has one of my favourite Christmas records of all time on it. 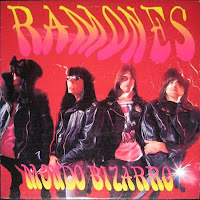 Kicked off by a true later-era Ramones classic in Censorshit, this album has a re-invigorated Joey back at his best. It has a vibrancy to it that we had all missed. It rocks, in melodic Joey style from beginning to end. I always was a Joey man, as you know. Joey no doubt insisted that the album included a couple of love songs, such as appeared on Rocket To Russia and Road To Ruin. The band deliver a stonking cover of The Doors’ Take It As It Comes for good measure too. 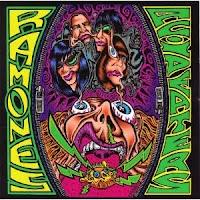 This interesting later-era album of cover versions from The Ramones, released in 1993, showed the group's liking for, and subsequent influence by, US garage - psychedelic rock from the mid-sixties. Four of the tracks are covers of songs that appeared on the legendary Nuggets compilation of that genre. Indeed, they had always liked a cover anyway, several appearing on their previous albums and here they approach their task with enthusiasm and considerable musical dexterity (something not normally associated with them). It is a very enjoyable journey through the sixties with all the tracks given The Ramones treatment. In every case it works as none of the renditions can be accused of not working. I personally enjoyed every one of them. I have always admired The Ramones' respect for musical heritage, particularly Joey, and this comes across loud and clear from minute one. There is not much more analysis that can be given, so I won't attempt to do so. 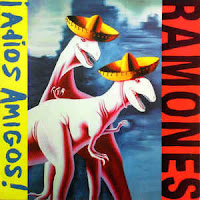 Although Dee Dee Ramone had left the group six years earlier, six of his songs appeared on this, their last album. Nineteen years after they first appeared, I can’t help but feel that there is a bit of an underlying sadness to this album. That’s how I feel when I listen to it, anyway. It is one of their most musically adventurous albums (within the context of being a Ramones album, that is!). CJ Ramone was a more melodic bassist than Dee Dee, his bass lines are impressive - nice and deep - on here. God bless you all, guys - when you were all received up above, the first thing God said was - 1-2-3-4!! 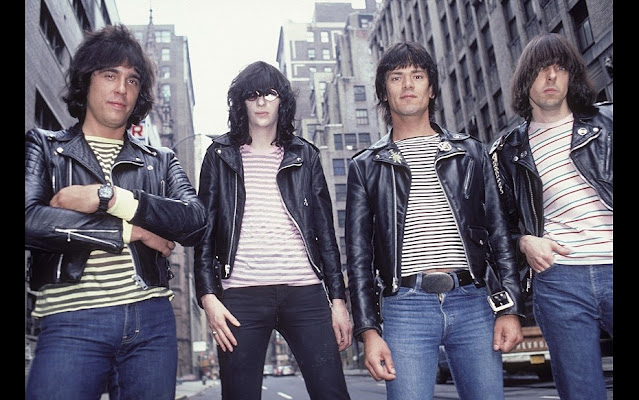