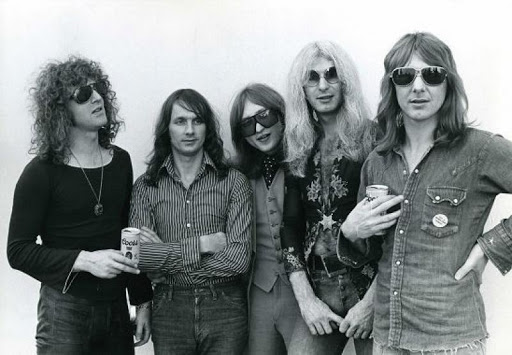 These are Mott The Hoople's studio albums, together with introductory snippets from my longer reviews (which can be accessed by clicking here) :- 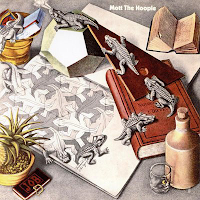 Mott The Hoople’s debut album, in 1969, three years before their Bowie-inspired renaissance, was a competent, but somewhat patchy affair. A great cover, by the way, but utterly irrelevant. Because it is Mott The Hoople, however, who we all went on to know and love so well, it somehow seems as if the album is better than it actually is.  Producer Guy Stevens wanted the band to sound, apparently, "like Bob Dylan singing with The Rolling Stones". He sort of achieved that, examples being the Dylanesque At The Crossroads (although it was a Doug Sahm cover, not a Hunter original) and the riffy, Stonesy Rock 'n' Roll Queen. Indeed, Mott were never far from being labelled as "Dylan influenced", because singer/composer Ian Hunter definitely was, and it came across in many of his songs. They also liked a riff or two, so a lot of Stones comparisons would subsequently be made. 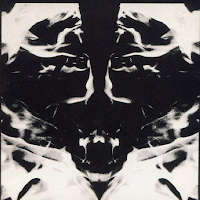 The second Mott The Hoople album, coming the year after their "good in parts" debut from the previous year. It is similar to that album in that it rocks in parts and there are some hints as to the future in some of Ian Hunter's slower numbers, but, as with all the first four Mott The Hoople albums, it carries the impression of being somewhat half-baked. While Thin Lizzy and Nazareth had two "finding their feet" albums, Mott had four of them. This album is far more of a Hunter album than a Ralphs one, in comparison to Wildlife, which had four somewhat insipid Ralphs tracks and three lesser-standard Hunter ones. Of the album's seven tracks, four are from Hunter, three from Ralphs, but it just seems to have Hunter's stamp all over it. 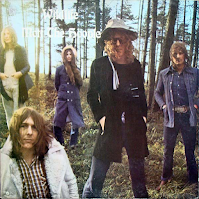 As pointed out in a review of Nazareth’s 1972 album, Exercises, many bands felt the need to go “folky” and “country rock” in style around 1970-72. The somewhat directionless Mott The Hoople, circa 1972, did exactly the same with this somewhat low key effort. Even the cover saw the band posing, slightly unconvincingly, in the middle of a wood. Nevertheless, despite several misgivings, listening to it sequentially, I can really hear progress here. It is the band's most cohesive and dare I say mature album to date, by far. It is far less chaotic than Mad Shadows, for example. The songs are not bad ones, and the album is an enjoyable listen, but as I said, there is not much Mott The Hoople about it. 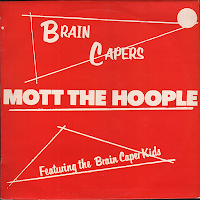 The last of the four “pre-Bowie” Mott The Hoople albums and it is probably the best of the four. It rocks much harder than Wildlife, and is less madcap and rambling than Mad Shadows. It shows some of the potential that would finally blossom over the next couple of years as Mott went into their glam-rock phase and merged showy pop with their by now more formed Dylan and heavy rock traits. It had been a long, hard road for three or more years, but MTH were getting there at last, it would seem. Just a bit more fine tuning needed. 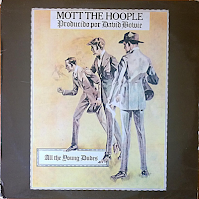 This was where the brief, but glorious Mott The Hoople Phase Two began and it is popularly thought to be the album where the band were “saved from oblivion” by David Bowie. That is not entirely the whole truth. Yes, he gave them the monster hit single All The Young Dudes and produced the album, assisted by Mick Ronson, but I am pretty sure that an awful lot of the material was there anyway and I also find myself questioning just how much Ian Hunter would be told what to do, even by David Bowie. Nevertheless, his contribution was obviously there, big time, but a lot of it has become somewhat mythologised over the years. What Bowie clearly and indisputably did, however, was to re-unite a rapidly fragmenting band and give them a purpose - a new raison d'être - together with a renewed vigour and confidence. To coin a more contemporary phrase - he gave them their mojo back. Released in September 1972, it was here, together with the hit single, that Mott The Hoople were catapulted, almost overnight, to their roller coaster two year period of glam rock majesty. As well as the afore-mentioned iconic single, there is some impressive 70s rock on there. 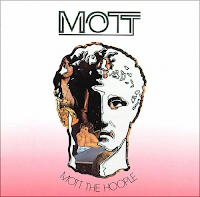 In the summer of 1973, three words mattered to me - Mott The Hoople. Yes, I had been "into" (using the contemporary vernacular) David Bowie since the autumn of 1972, but even then, at fourteen, there was something a little bit too effete about Bowie upon which to focus my adolescent admiration, despite my love for him. Mott The Hoople were different. They were LADS. Although they looked like some of the prefects did at my school when out of uniform - long hair, Afghan coats, and big flares, I always felt Mott could handle themselves in an apres-gig row though. No-one would push Ian Hunter, Overend Watts or Mick Ralphs around, would they? Like The Clash after them, or The Jam, they were "our band". A band of mates or big brothers to look up to. That is a feeling that really sums up my relationship with Mott The Hoople and it was one that accepted them for better or worse. Bands got away with 30 minute albums in those days. It is 30 minutes of enjoyable slightly glammy rock music, nothing more, nothing less. As those sort of albums went, however, this was up there with the best. I knew every note of it in 1973 and still do. 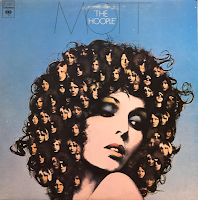 Mott The Hoople's 1974 swansong is a mixed bag. After rising to glam rock heights with David Bowie's initial impetus with corking albums in All The Young Dudes and Mott, they were gone almost as quickly as their star had risen. It was a shame but probably for the best. Sounds awful that, doesn't it? You just felt it couldn't go any further, though and to be brutally honest this is a bit of an uneven album, lacking cohesion and direction. Guitarist Mick Ralphs had left the previous year to join Paul Rodgers in Bad Company and this left Ian Hunter do everything himself, something he felt he over-compensated for. Replacement guitarist Ariel Bender (Luther Grosvenor) never really fitted the bill for me, being a bit too comic-book rock star. So, despite some strong points on the album, it was also the product of a band beginning to fall apart. 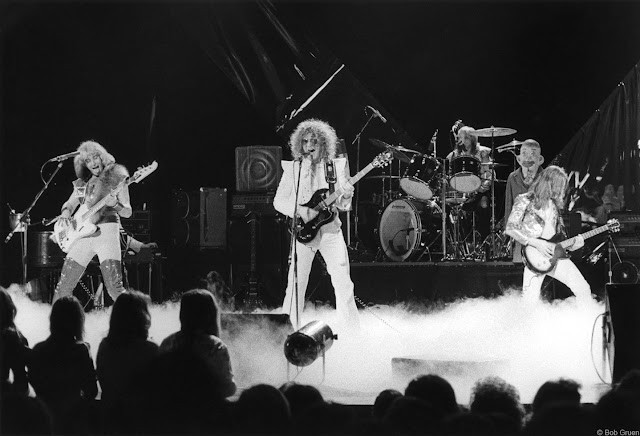