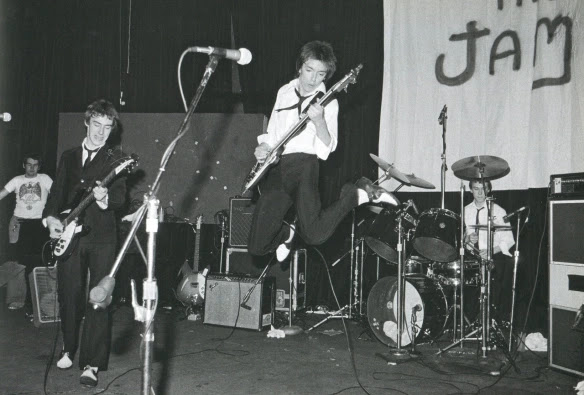 These are The Jam's six studio albums, together with snippets from my larger reviews (which can be accessed by clicking here) :- 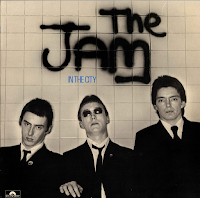 Formed in Woking in 1975-76. The Jam were Paul Weller, with his harsh British working class vocals, and Who-like guitar, underpinned by Bruce Foxton’s rumbling bass and Rick Buckler’s metronomic drumming. While they shared the "angry young men" outlook and fast tempos of their punk rock contemporaries, The Jam wore smartly tailored suits rather than ripped clothes, and, rather than rejecting the influences of recent rock history in common with other punk bands, they incorporated a number of mainstream 1960s rock and R&B influences, particularly from The Who, The Kinks and from Motown music. This set the Jam apart from most of their contemporaries, and placed them at the forefront of a nascent mod revival movement. So, on to The Jam’s breakneck debut album. Was it punk or simply a throwback to thirteen years earlier and The Who? Probably a bit of both if we are brutally honest. A barked-out "1-2-3-4" and we are straight into Art School (exactly what were art schools?, even in the 70s I had no idea!). We had heard nothing like this, though. It was like The Who, but punked-up to the max. To me, it felt somehow more genuine than The Sex Pistols and somewhat contrived posturings. The Jam really were just three lads from Woking who wanted to form a band. You could relate to these three because they were like you and your friends. The Sex Pistols you would cross the street to avoid. The Jam had an intrinsic energy and anger that made this album a punk one, but Paul Weller already had an instinct for a hook that would serve him well as he developed his craft. Among his lyrics, too, despite a bit of teenage naiveté, was a pertinence and wisdom way beyond his years and average Secondary Modern school education. This was somebody who could be special. Time would prove that to be the case. His career flourishes to this day, as we know. 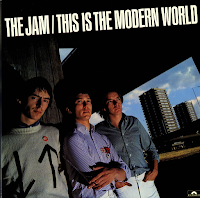 Often maligned as “the difficult second album” when Paul Weller supposedly suffered from “writer’s block”. You what? You having a laugh?  There are actually some really good songs on here. This was a far, far better album than it was ever given credit for. The sound on it is good too - full, punchy and solid, lots of impressive bass and drums. Bruce Foxton and Rick Buckler were equally important to The Jam as Paul Weller at this point. Buckler, especially, really stands out on this album - a real powerhouse. The album, despite coming out at the height of punk in late 1977, had so many songs on it that showed that The Jam were not going to be your basic three chord, frantic punk band. Only the afore-mentioned London Traffic and In The Street Today really fitted the punk blueprint. Yes, The Modern World and Here Comes The Weekend have the attitude and some of the anger, but they are, despite their solidity, much slower in pace. There is something still so stirring about Here Comes The Weekend, though, and, once again, it is a song I never tire of hearing. The sixties influence from The Who, The Small Faces and freakbeat/psych pop is all over this album. You could see how All Mod Cons developed out of this. The rough edges were ironed out and a poppier sensibility honed. The foundations were laid here, though, and as I said before, do not dismiss this album. For me, actually, I prefer it to The Gift and parts of Sound Affects too, would you believe. 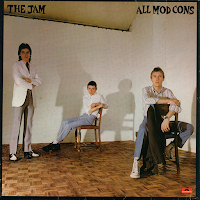 The previous album to this one, This Is The Modern World, saw main singer-songwriter Paul Weller supposedly suffer from "writer's block". I am not sure about that. The album sounded pretty good to me. Nevertheless, he has admitted himself that he was struggling for creativity before it all suddenly came together with, this, The Jam's finest album. The punk pretensions and 60s r'n'b stylings of the first album and, to a lesser extent, the next one, were gone by now. The songs became increasingly sophisticated, intelligently structured and lyrically surprisingly observant and mature for some in Weller who had only recently turned twenty-one. The band still was a three-piece, Weller on lead guitar, Bruce Foxton on bass and Rick Buckler on drums and it had never sounded as tight or as accomplished as here. Yes, it is a musically impressive album, but it is the words to the songs that everyone still remembers. 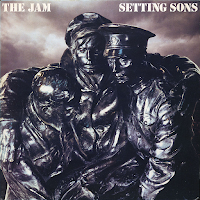 The Jam released Setting Sons in late 1979, a year after they had conquered all before them with All Mod Cons, which took them from being (supposed) punks to champions of the “new wave”. They were now getting close to the height of their popularity. It was talked up as being a (dreaded) “concept album”, ostensibly about three friends who grow up, get jobs, go to war then ummm..well...errr. That was that. No concept really, was there? Time for a Motown cover....It was still a strong album, however. At times Weller’s lyrics reflected the early twenty-something that he was, on other occasions they showed the insight and wisdom of a much older man. It is fair to say, though, that these days I do not hang on his every word as I did back in 1979. It has not aged quite as well as its predecessor has. 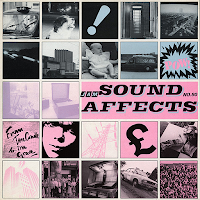 Sound Affects was released in late 1980, with The Jam now at the height of their powers. Going Underground went straight to number one the previous March. In summer the lead-off single from this album, the Taxman-influenced Start! did likewise. The band were untouchable now, masters of ex-punk chart pop. Paul Weller, much in admiration of The Beatles’ Revolver, seemed to want to produce a similar album - sparse, tinny, guitar-driven with some cutting lyrics scattered around for good measure. I have to admit that it is a bit of a difficult album to categorise - the old sixties influences are very much to the fore - the afore-mentioned Beatles, The Small Faces, sixties psychedelic pop. It is not an album that builds on the Jam sound crafted on All Mod Cons and Setting Sons, though, it strips things down. The sound is more minimalist, trebly and succinct and, by the old "side two" there is a bit of a lack of cohesion. This is where it gets a bit patchy. So, back in late 1980, this album was received like the second coming. My memories of my first few listens at the time are those of a slightly underwhelming nature, and an unwillingness to face up to the fact that I preferred the previous two offerings. I clung on to that guitar break in Pretty Green, the hooky appeal of Man In The Corner Shop and the magnificent atmosphere of That's Entertainment as great moments to help me overlook other more ordinary songs like the short But I'm Different Now, the vague Dream Time and the throwaway instrumental, Music For The Last Couple. 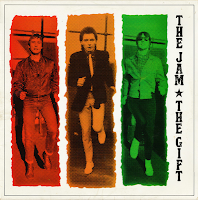 Released in March 1982, this album signalled the beginning of the end for The Jam as Paul Weller was no doubt hatching his Style Council project in his mind. Weller used horn players on this album as his Motown/Stax influences grew stronger. The traditional Bruce Foxton (bass) and Rick Buckler (drums) rhythm section seemed less integral to The Jam's sound on this one, despite some high points - Foxton's Town Called Malice intro for one. The album also suffered from a modicum of self-importance, presented as it was in a candy-striped paper bag (does anyone still have their copy of that, I wonder?), proclaiming that this was, indeed, a "gift". Somehow it made you feel as if we should be grateful for this offering. All marketing hype, of course, but when an altruistic, honest band like The Jam fell prey to such things...The Northern Soul dancer image on the inner cover was a good choice, though. This album had considerable Northern Soul influence. So that was it, after a couple more great singles in the afore-mentioned The Bitterest Pill (I Ever Had To Swallow) and Beat Surrender Paul Weller pulled the plug on The Jam, leaving poor old Bruce Foxton and Rick Buckler high and dry. Buckler took it the hardest, it is said. One could see which direction Paul Weller was going here, with the music on this final album. What was amazing, however, was that he called the whole thing to a halt virtually overnight. Five great years. Maybe, like The Beatles, The Clash, Fawlty Towers and The Office, he was right. The Jam left a great musical legacy. We will never know what would have become of them. Would they have become The Style Council anyway? What is clear was that Weller wanted to diversify considerably in ways that the other two did not. He was still comparatively young and his life was just growing in a a different direction. It happens to all of us.