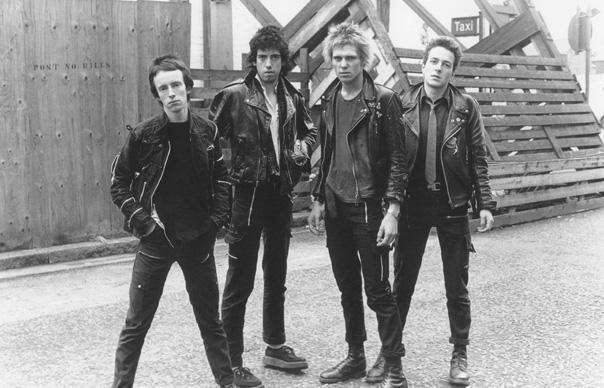 These are The Clash's six studio albums, together with snippets from my longer, more detailed main reviews. To access those, click below :- 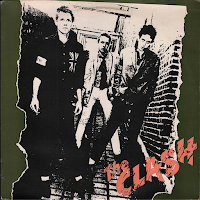 One of the genuine cornerstones of the UK punk explosion, this absolutely seminal breakneck ride through thirteen two minute or so songs, plus Police And Thieves, is so vital to understanding the seismic shock that punk was to the music scene in 1977. I vividly remember a friend of mine getting his first car and we drove from Buckinghamshire to Manchester for the sake of it - just because we could, sleeping the night in the car in a backstreet in the city’s warehouse district. We had one cassette to play - this album. We played it over and over, there and back. Its effect was that remarkable. We loved every minute - the buzzsaw guitar, the frantic drums, the rumbling basic bass and Joe Strummer’s barked, often incomprehensible vocals. "The only band that matters" - so the often-used cliché goes whenever The Clash are being discussed. While this was somewhat hyperbolic (and one suspects, self-perpetuated), the mythology around this ground-breaking UK punk group always had a certain amount of truth in it - guitarist Mick Jones' West London high-rise tower block upbringing, bassist Paul Simonon's initial lack of ability, drummer Topper Headon's unpredictable temper, Joe Strummer's middle-class upbringing and so on. Well, you know what they said - well some of it was true. 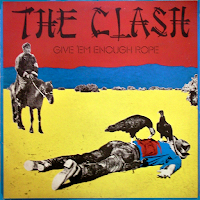 In what was a great month for "punk" albums, November 1978, after The Jam's All Mod Cons, came this, The Clash's long-awaited second album. Their first one had an earthquake-level effect on contemporary music and many expected more of the same - two minute long frantic punk songs. What they got was far more "rock" than "punk" in many. The Clash, in many respects, had turned a bit more Mott The Hoople-ish than Sex Pistols. The tracks were longer, musically more intricate, lyrically more astute, showing that although the punk explosion had taken place, but now, progress must be made or else stagnation would occur. Why, even The Ramones were diversifying slightly, on the odd track, at least. This, and All Mod Cons were the albums which took "punk rock" to a different level. In fact they conclusively sounded its death knell. To work on this album, The Clash hired Sandy Pearlman, the American producer of Blue Oyster Cult and, although, some have criticised the results, it is still a good album and, at times, a little underrated. 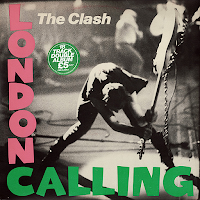 The front cover visually references Elvis Presley's debut album with the pink and green writing along the front bottom and left side and shows Paul Simonon smashing his guitar, as to symbolically destroy the "old music" of the likes of Elvis. "No Elvis, Beatles or The Rolling Stones in 1977" growled Strummer a couple of years earlier. Now, they were diversifying as dramatically as The Beatles, pushing punk's boundaries or maybe just turning their backs on punk completely. There is a convincing argument that says they were doing the latter, only two and a half years after the raw punk of their debut. What is certainly not in doubt was that The Clash were now taking all sorts of musical chances. In the following year, they would take even more - the the nth degree. On to the album. Personally, Sgt Pepper, Pet Sounds, Born To Run, A Night At The Opera, Brothers In Arms, Thriller, Led Zeppelin IV, Exile On Main Street are not my favourite albums by those particular artists/groups, although they are popularly accepted as such. Similarly with London Calling. I prefer Give 'Em Enough Rope, The Clash and parts of Sandinista!. That is not to overlook this album's undoubted quality and influence at the time. A "punk" group doing a double album? Wow! It worked too - a chocolate box of styles made for an always interesting listen and you are taken from one feel to another, track by track. 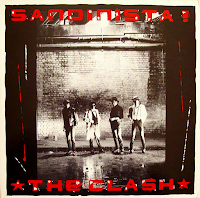 On to this controversial album. Bloated, self-indulgent, 15 tracks too long,..all the contemporary and continuing criticisms hold water. However, for me, despite all those drawbacks, it is only the last few tracks that I feel I could do without. Sandinista! (inspired by the Nicaraguan left-wing resistance group) is a veritable cornucopia of musical styles - hip hop, rap, rockabilly, Americana, folk, cajun, country, 60s pop, disco, Motown, reggae, dub, jazz, bluegrass, gospel, calypso, funk, doo-wop, rock n roll, even waltz...why, they are all there. Everything it seems...except punk. The very thing that had catapulted The Clash on the road to stardom has been eschewed, big time. To an extent, after the cross-genre success of London Calling, The Clash had suddenly become almost mainstream, and with that came an arrogance and cocksure attitude of untouchability and a feeling that they could get as drug-addled as they liked and, in White Album style, record what the hell they liked - rubbish or not. From all accounts the sessions for the album, initially in Jamaica (initially the album was to be far more reggae-flavoured, featuring Mikey Dread as producer) and subsequently in New York City, were chaotic and over-populated with numerous musicians and hangers-on. Several different people played bits here and there on the album, it is certainly not all the four members only, far from it. Sometimes drummer Topper Headon was either too drugged up or frustrated by some of Strummer and Jones’ ideas and bassist Paul Simonon was missing on some occasions. Norman Watt-Roy (bass) and Mickey Gallagher keyboards) from The Blockheads were present for quite a lot of the sessions. At times it seemed as if Strummer and Jones had been inspired by London Calling producer, legendary nutter Guy Stevens as they became increasingly off the wall in some of their musical experimentation. They also were apparently motivated to piss CBS executives off over various perceived injustices - still wanting to wilfully stick it to management, punk-style. Granted, you can pretty much write off most of “side six” of the original vinyl album, with its four dub versions that sort of became The Clash’s Revolution 9 or their equivalent of the final "jam" side of George Harrison's All Things Must Pass, but, for the most part, their drug-fuelled apparent lunacy worked well. Time has served the album well, too, and it is now quite the revered creation. Quite what they were trying to achieve with this album, however, is still unclear as indeed is whether they ever achieved it or not. Opinions are still divided. For some it is their best work. For others it is a sprawling, indulgent, intoxicated mess. Me, I have always had a lot of affection for it. 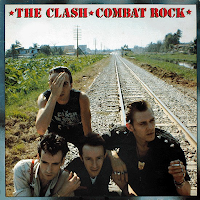 Released in 1982, this was the last proper Clash album, and, to be honest, the one to which I return to least frequently. It was the one that people who knew little about the group's first album bought, attracted by the big hit single that it contained. It has never convinced me as an album, unfortunately. I find it lacks cohesion and intent. Let me try and explain why. Unlike many, I have never particularly liked the Stonesy and incredibly popular Should I Stay Or Should I Go, and also, as the old “side two” progresses, the songs get increasingly lazy and unappealing - particularly the melodic but strangely incoherent Inoculated City and the rambling, jazzy Lou Reed's Berlin-esque Death Is A Star. These latter two tracks tried, but failed, to summon up a post-apocalyptic Diamond Dogs-style urban nightmare. I know where they were trying to go, but they never got there, for me. They remind me of the final batch of comparatively patchy compositions from Sandinista!. The band were imploding behind the scenes - Strummer and Jones constantly rowing, Headon taking more drugs. These sub-standard songs stand as examples of that, for me. You could somehow feel the lack of cohesion within the band's dynamic, though. It definitely comes across in the songs and their running order. The first half of the album (the old "side one"), is definitely the superior. Not long after this The Clash as we knew them were no more. That was no surprise, really. However, let it not be forgotten that it had been five simply great years. 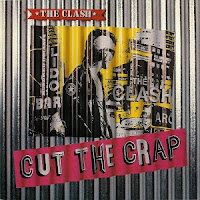 This, then, is The Clash's last sad chapter. Three years after their split, Joe Strummer and Paul Simonon* re-convened with two "gun-for-hire" guitarists, a keyboard player and a new drummer to produce an album which has been all but airbrushed, Gary Glitter-style, from Clash history. I remember buying it on cassette and playing it on new new Sony Walkman back in 1985, feeling really disappointed, having expected so much more. Does it deserve a re-assessment? Possibly, from a completist point of view, but not in order to grant it anything like a reasonable amount of kudos. * Simonon didn't appear on the final recordings, being replaced by The Blockheads' excellent Norman Watt-Roy. ( I have never been truly convinced that Simonon played on the band's debut album either, whisper it quietly). The problem with the album is that, while it contains some reasonable Strummer songs -including one absolute classic and one 9/10 one - it is a victim of the eighties. Mick Jones' clarion call guitar has been replaced by deafening synthesiser riffs which all but drown out Strummer's typically garbled vocals and furthermore, the guitarists leant some terrace-style chanted backing vocals to most of the songs too. Were the songs kept as bass/guitar/drum and Strummer ones, it may have been a much better album. In many cases, it is the production as opposed to the songs which sees it fall down so lamely. 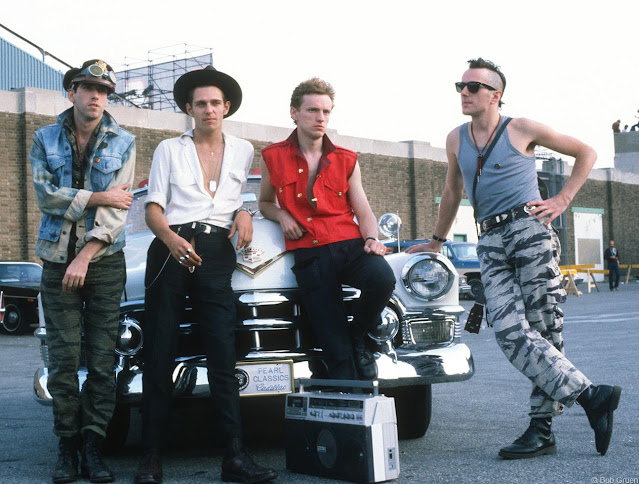