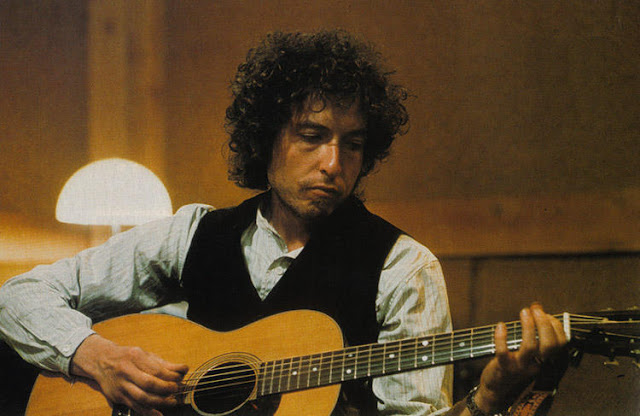 These are ten of my favourite Bob Dylan albums. They are listed chronologically as opposed to in order of merit, I prefer it that way as my favourites are always changing their order. I have also attempted to span his career with my selections. 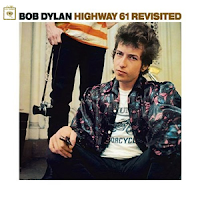 Highway 61 Revisited (1965)
The album that blew the windows wide open. Yes, half of Bringing It All Back Home had introduced the “electric” element to Dylan’s sound with a colossal bang, but here it took it to the max and mixed it with some of his most evocative, cinematic, imagery-full lyrics. Indeed, some of the most adventurous lyrics popular music had ever seen. Remember, this was 1965. The Beatles were only just out of the covering of rock n roll standards on half their albums, The Rolling Stones of covering blues standards and The Beach Boys were still singing about surfing, cars and girls. What Dylan achieved on this album was just remarkable. It is Dylan taking his influences and making something new, innovative and adventurous out of them. As the title suggests, Highway 61 is "revisited". "Re-worked" more like, with Dylan's supremely poetic, image-packed lyrics making Dylan's style of blues something completely unique. 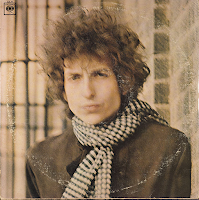 Before Sgt Pepper had been conceived of came Dylan's double album masterpiece, Blonde On Blonde, his third consecutive "electric" album featuring what he described as "that wild, mercury sound" - a sort of guitar, swirling organ and crystal clear cymbal/percussion sound that is pretty much unique to this album alone, in all his works. It is a magnificent, ground-breaking work of contemporary musical and lyrical art. For a start, double albums were virtually unheard of, let alone one side of a vinyl disc being taken up with one single track, as here in Sad Eyed Lady Of The Lowlands. Indeed, this was the rock genre's first double album. Dylan's vocal delivery was as good as it had ever been, many of his lyrics were actual poems, full of intriguing imagery, the result of an imagination running wild and free. The connection with traditional blues musical conceits was a strong one too. There is some great blues material on here. For many, this was/is Bob Dylan's crowning achievement. It is difficult to disagree. It is also very difficult to review because a) it is so damn good and b) so many people have offered so many opinions on it. Mine are just some more. 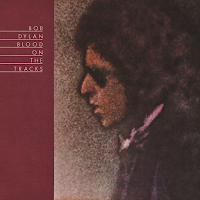 This was the beginning of the third classic phase of Bob Dylan's career, for many, after the early acoustic protest years, then the "wild mercury sound" of 1965-67's switch to electric era. Yes, there was the laid-back country stuff, but that didn't really merit "classic" status. This did, however. The foundations laid on Planet Waves were fully built on here on one of the finest "relationship break-up" albums of all time. I remember first hearing it as a teenager in March 1975 and being totally blown away by it. The thing about the album which is often overlooked is that it is not all made up of embittered, heartbroken "break-up blues", lyrically. There are several lovely, tender moments - You're A Big Girl, Simple Twist Of Fate and the winsome country of You're Gonna Make Me Lonesome When You Go. Even the lover's lament of If You See Her Say Hello is a gentle, affectionate song - these are genuinely touching love songs. Another counter to the "bitter, divorce. vitriol..." clichés trotted out about the album is that it ends with two quite tender songs in the reassuring loyalty of Shelter From The Storm and the melodic, unthreatening, almost throwaway country vibe of the short Buckets Of Rain. Nothing about Dylan is clear, though, is it? This was one of the century's greatest albums. No question. Dylan was finally shedding the burden of his classic 1964-1966 period and proving that he could once again produce a spectacular piece of work. Even at the time I remember feeling that this was an artist re-discovering his greatness. Not all contemporary journalists took that view, though, and notable names such as NME's Nick Kent, who called it "trashy" and soon to be Springsteen champion Jon Landau, who said it had been "made with typical shoddiness", wrote reviews that they presumably felt embarrassed about in later years. It took a few months for its greatness to be slowly acknowledged, which was a noteworthy oddity. As for me, I'm no journalist but I never tire of listening to it, all these years later. I feel I should have written more about it but for some reason I can't (the same applied to Blonde On Blonde). Maybe Dylan's compositions say all that is needed. Of course they do. 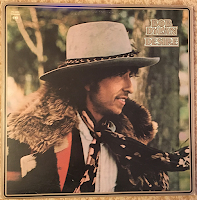 Following on from Bob Dylan's successful Rolling Thunder tour this album utilises the same large group of musicians that had troubadoured around with Dylan the previous year. It is one of his most "collaborative" albums, musicians-wise and began its genesis only a few months after the release of Blood On The Tracks. It is, however, a completely different album in its overall sound, is ambience and its lyrics. Its sound is more upbeat, heavily-centred around the use of a violin and its lyrics not influenced by the previous one's emotional angst. There is a strange story emanating from the early months of the creation of this violin-dominated 1976 album - apparently Dylan was being driven around Manhattan and saw violinist Scarlet Rivera carrying violin around Greenwich Village in a case. Dylan stopped to talk to her and she ended up playing a huge part on this album, contributing a great deal to the unique sound. Rivera herself has said that if she had been a few seconds earlier or later, the whole thing would never have happened. Such is fate, and, indeed, musical mythology. I would like to think it is true. She says it is. 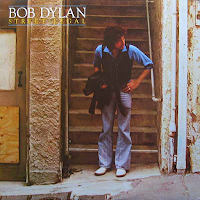 Released in 1978, following from Blood On The Tracks and Desire. Hmmm. Tough ask. In many ways, though, this is my favourite Dylan album. As a young punk in 1978 I loved it. I loved the saxophone-based sound, played by Spector (and Mink De Ville) veteran Steve Douglas. I loved the romance of many of the songs and also the urgency in Dylan's delivery. Many find the album too dominated by the saxophone, too sort of poppy in its approach and that it utilises too many gospelly female backing vocalists. They criticise another of my favourites, the same year’s Live At Budokan for the same reasons. Personally, these are some of the reasons I like it. Dylan, heavily in debt due to his messy divorce from Sara, however, was at his most irascible during the hurried recording of the album. You would never have known, though, as it comes over as breezy, accessible and vibrant, surprisingly. In contrast to 99.9% of Dylan aficionados I feel there is not a duff track on the album. Regarding popular analysis, many will say that there are deep religious references buried in the lyrics of songs like Señor and possibly Changing Of The Guard and No Time To Think that would provide a pointer to Dylan’s new direction - a shock salvation that would pre-occupy him for the next four years. There was a slow train coming. 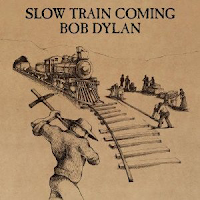 Sometime in 1978, Bob Dylan "saw the light" and became a born-again Christian. It is easy to deride the three explicitly devotional albums he released in the subsequent years. Some of the criticism is justified, some of it is completely unfair. This is the best of the albums. Its sound quality is superb, for a start. Mark Knopfler is on the album and it was produced by soul veteran Jerry Wexler. It has a rich, bassy warmth to it, and, while the lyrics are undoubtedly preachy and dogmatic, personally, I always find the album a pleasure to listen to and do not find any aspects of it remotely off-putting. Whatever Dylan's motivations behind his Christian phase, there is no doubting his total commitment and powerful, potent attack on this material. Whatever he believes, he does appear to believe in something, and is forcefully expressing it. Good for him, in many ways. 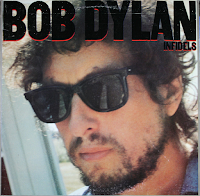 Along with 1989's Oh Mercy, 1997's Time Out Of Mind and, of course, 1974's Blood On The Tracks, this was hailed as one of Bob Dylan's great "comeback" and "return to form" albums. Rightly so, in many ways, despite the hackneyed cliches (that  am also using!). After the comparative "wilderness years" of his spiritual quest between 1978 and 1982, Dylan widened his appeal somewhat, employing Mark Knopfler, widely respected reggae rhythm section Sly Dunbar and Robbie Shakespeare and ex-rolling Stones guitar genius Mick Taylor - this was certainly an improvement, all round, on the previous couple of slightly patchy albums. Yes, the Biblical imagery was still there in places, but the full-on, in your face proselytism of Slow Train Coming, Saved and Shot Of Love was not nearly as dominant. There was also a warmth to the sound - excellent quality, sumptuous guitar and infectious rhythms, not surprising given the personnel. It was the best sounding Dylan album since Slow Train Coming. 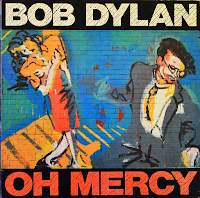 After the two previously-mentioned, poorly-received eighties-style synthesiser-dominated albums in Empire Burlesque (1985) and Knocked Out Loaded (1986), plus another critically-panned one in the bluesy Down In The Groove (1988), Bob Dylan, supposedly washed-out and past it, surprised everyone by coming up with a classic. After this album, came another comparative clunker in Under The Red Sky (1990). All very odd. It was, indisputably, though, his finest album since 1983's Infidels. Dylan employed the services of Daniel Lanois, who had produced the phenomenally successful The Joshua Tree for U2. The production was quite deep, bassy and haunting and matched Dylan's mostly sombre-ish, introspective material. 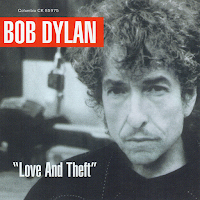 This is a Bob Dylan album packed full of nostalgic Americana - it is folky, bluesy, cajun, swampy, country, rockabilly. All of those things make for a nice gumbo of an album, very much influenced by a Louisiana Southernness, more so than on any other Dylan album. The period coincided with Dylan starting to present radio shows full of Americana recordings, so the direction on this album was no surprise. It perhaps would not be everybody's choice for a favourite ten inclusion, however. 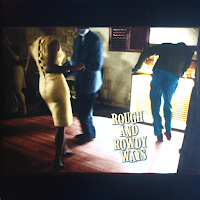 In the middle of a pandemic of Biblical proportions, guess what? Bob Dylan, music's grand old Methuselah, puts out his first album of self-penned material since 2012's Tempest. There is something hauntingly apt about that, isn't there? The album is a good one - a mix of lengthy, quiet, acoustic, often mortality-haunted lyric-fests and a few (three) tougher, industrial-strength blues workouts. This has been Dylan's way for a fair few decades now, so those who don't like it should stay away. Those who are ok with it are guaranteed to get some pleasure from this surprise release. "I'm a man of contradictions, I'm a man of many moods..." he tells us - I think we knew that, Bob.

For my full-length reviews of all Dylan's albums, click here :-