Jazz keyboardist Herbie Hancock put in many hours and years with Miles Davis, but it was on these seventies jazz funk albums that he is critically better remembered. I have covered three of his best funkers here.... 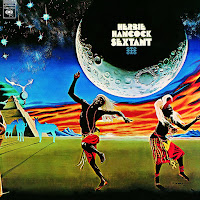 Before going full on jazz-funk fusion with his critically-acclaimed next album, Herbie Hancock released this improvised art jazz-spacey, experimental Miles Davis-influenced album. Containing only three tracks it builds on the foundations laid by Miles Davis’s ground-breaking Bitches’ Brew, but, for me, is the better album as it is not as ad hoc and improvised as that one, and is driven by Hancock’s instinctive rhythm and willingness to employ a funky drum sound. I saw it described as “avant funk”. Rain Dance is spacey, weird and funky all at once and remains just the right side of indulgent as far as I am concerned.

Hidden Shadows is pretty funky, despite the improvised Davis-esque saxophone groove. It is here that you really hear the funky sounds that would be given free rein on the next album begin to take shape. It is a really good track, the best if the three on offer.

The nearly twenty minute Hornets is the most experimental and tries the patience a little, despite its fine rumbling bass line and funky percussion. Its squeaking saxophones and general discordance are a bit grating at times but there is still an appealing weirdness to it. Edit it down by ten minutes, though, and it may be more cohesive. The bassy bit near the end is great, however.

The album was a commercial flop, which was the opposite to this one coming up..... 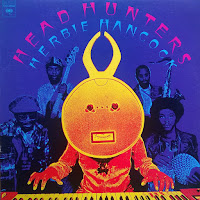 This is often classified as a jazz album, which, of course, it is, due to its keyboard virtuosity by Hancock on Fender Rhodes piano, ARP synthesiser and clavinet but, these are also extremely funky instruments, and he duly plays them so. The drums, the brass and the bass are pure, copper-bottomed funk. For me, it is one of the funkiest instrumental albums in existence  and, along with James Brown’s funk material from the same period, has been supremely influential.

Chameleon is a fifteen minute festival of funk - overflowing with funky guitars, big fatback James Brown-style drums, regular cookin’, punchy brass interjections and beautifully deep, rumbling bass lines. The bits where the music briefly halts, leaving only the drums and then the bass and the funky, spacey organ come back in are breathtakingly good. The sound quality is stunningly good too, warm, bassy and in perfect stereo. Watermelon Man is a funky re-recording of a previous jazz classic, this time powered by James Brown funky drums and blowing into beer bottles to approximate the hindewhu whistle sound so common in Brazilian samba music, a sound that brings to mind tropical jungle bird sounds.  Once again, it is a thumping track that simply drips with instinctive funk.

Sly is a sensual tribute to Sly Stone that features some sumptuous bass and drums. The interplay around six minutes in is just funky as fuck, as they say (“they” can get away with saying anything, can’t they?). Vein Melter is probably the jazziest thing in the album, but it is still deliciously funky and also features some sweeping strings and chilled-out Miles Davis-influenced freeform saxophone.  Its weird sounds hark back to its predecessor. Overall, this is a fine album that never fails to satisfy.

* A fine review of the album has been written by Mark Barry here :- 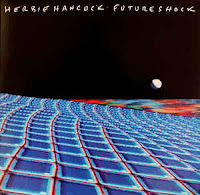 This was Herbie Hancock's first electro-funk album and the first of his to delve into instrumental hip hip sounds. It was a big commercial success and is very representative of some of the sounds of the mid-eighties.

Rockit is superb - full of infectious beats, chunky riffs and that iconic organ line. It is one of the great instrumental hits. It was the perfect merging of contemporary hip hop sounds, accessible dance grooves and rock riffs. It was, unsurprisingly, a massive hit.

Unusually for a Hancock album, we get female-sounding vocals (actually from Dwight Jackson Jr.) on the funky grind of Future Shock. The vocals are sung in a style that reminds me of Curtis Mayfield's Superfly which is not surprising as it is a cover of Mayfield's Future Shock song from ten years earlier. TFS has an upbeat dance groove to it and is powered along by synthesisers, clavinet and wah-wah funky guitar.

Earth Beat is both spacey and hip hop-y, featuring great synth parts and a huge, deep bass as well as some captivating percussion. Oh, and there are the ubiquitous (for 1983) scratching noises too. Autodrive utilises that synth-drum sound so popular in dance material of the time as well as some jazzy piano breaks. Rough also features occasional vocals over its thumping, insistent beat and finishes this excellent, ground-breaking album that is just so evocative of its era. It just reminds me of being in music venues at the time, they were full of this sort of thing.