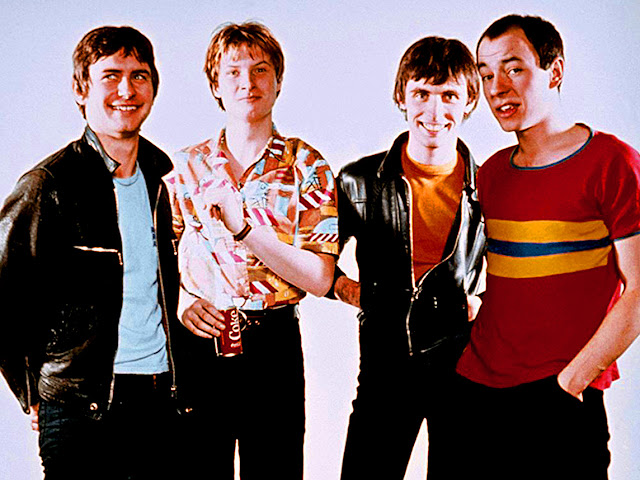 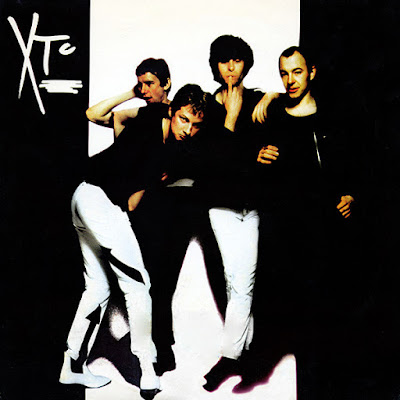 1978 was an exciting time for music - acts considered part of the punk scene such as The Jam, The Buzzcocks, The Boomtown Rats and Elvis Costello were breaking through into the charts and appearing regularly on Top Of The Pops, the old supposed "dinosaurs" were still putting out good stuff, seemingly oblivious to punk and disco, although reviled by many, was exciting and vibrant. Why then, did the next batch of "punks" to appear on the scene decide not to be politically-motivated rabble-rousers but come across as somewhat dour, faceless "intellectual" geeks, producing music that was actually quite dull? This sort of went against the supposedly "up and at 'em" excitement of punk, didn't it? Anyway, within a short period of time it had led to post punk and a fair amount of supposedly punk bands sounded like Swindon's XTC.

The key to the sound was a monotonous, rumbling bass sound, metronomic drums, quirky, jumpy vocals and a general darkness of ambience that prevailed, however fast the music may have been.

In many ways, this, XTC's debut from 1978, was typical of this sort of thing, a sound that had given us Magazine and would soon give us groups like Gang Of Four and the pre-synth version of Ultravox. For me, a lot of the untramelled excitement of punk was already being lost as groups like this became ten a penny. To be fair, XTC were a bit better than mere also-rans, but I'm sure you get my drift. Indeed, they undoubtedly influenced those very groups, so they were unfortunate in that they are rarely given credit for that.

Radios In Motion has a great bass intro and some typically 1978 punk riffs, although the vocal is very mannered, in that way that punk vocalists were expected to sound. I can't effectively describe it, but I'm sure you know what I mean you hear it. The rock 'n' roll-influenced "ba-ba-yoo" backing vocals sound very clumsy, however.

Cross Wires is also very 1978 punk-by-numbers, featuring some Attractions-style organ too. It now sounds quite home-made and dated, I have to say. This Is Pop? is an improvement, a song that asks the very-1978 question of exactly what should music be all about. It seemed to be something that often came into punk lyrics, along with exhortations not to listen to the accursed mainstream radio. Do What You Do seemed to be adhering to the tenet that "punk" needed to be played at absolutely breakneck pace. Despite its obvious energy, it still sounds somewhat dull to me and it did at the time, I recall, despite my liking for fast punk.

Statue Of Liberty has singer Andy Partridge going all Elvis Costello-Joe Jackson in a more appealing number that utilises a very early Attractions sound, complete with swirling organ. Amazingly, what we get now is an interesting white dub cover of dinosaur Bob Dylan's All Along The Watchtower. Partridge's voice sounds a lot like Steve Harley here and I actually really like it. For all the punks' supposed dismissal of the old guard, it was all a bit of a show. This contains a great bluesy harmonica solo too. Who would have thought it? I have to admit that I find this track quite a fascinating little curio. At nearly six minutes long, it is their Police And Thieves or Johnny Was.

Into The Atom Age sounds very Boomtown Rats with its "da-da-da-dahhhh" backing vocal and its other vocals Bring to mind The Jam's Bruce Foxton. I'll Set Myself On Fire has Partridge going all vocally jerky in stereotypical post-Rotten punky way. Quite why so many punk vocalists felt the needed to bleat and hiccup remains a mystery. The track has some good instrumental breaks, though.

I'm Bugged delivered a most typical deep, throbbing bassy post punk blueprint as Partridge moaned about the very punk culture he was supposedly trying to break into. It was the very culture whose coat-tails he was hanging onto. Without punk, he would have had to play prog rock and sing about wizards. It is an effective track, however and I like it.

The beautifully bassy New Town Animal In A Furnished Cage is quite unique in its ambience and Spinning Top has an irresistible white reggae groove to it that I really like. Neon Shuffle is a frantic, organ-driven closer that leaves me thinking that maybe this wasn't such a dull album after all. It is actually not a bad debut, its problem was that was so much better stuff around at the same time.

** The group's first 45, Science Friction, was an enjoyable but typically second division punk single. She's So Square has the group moaning about someone stuck in 1967 (nothing wrong with that) while Dance Band comes up with a great bass line and a groovy little melody. 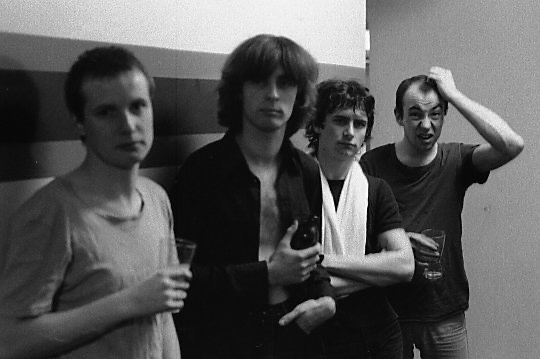 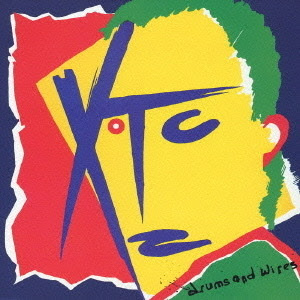 XTC were one of those bands that were known to me in 1978-79 but I was never bothered about them much, apart from their one massive hit, which I did like. I saw them as most definitely second division - earnest, dull, unremarkable and parochial student types that didn't hold the appeal to me of angry tub-thumpers like Joe Strummer or Paul Weller, clever lyricists like Elvis Costello or animated characters like Ian Dury. They were a sort of bridging point between punk and post punk and, for reasons that I have tried to explain, they just didn't really inspire my interest.

Anyway, this was their most successful album, from 1979, and is considered by those who know more about them than I do to be their best offering. It is actually ok, if a little dated now, and I am able to appreciate it. At the time, though, I heard their stuff on John Peel's show and it sort of washed over me., failing to grab my attention, apart from that one song, of course.

The album starts with the band's best-known song and biggest hit, the staccato and highly infectious Making Plans For Nigel. It is a great song, with interesting lyrics, several hooks and a killer guitar backing. It fully deserves its regular placing on many people's new wave playlists.

Helicopter is a sort of Boomtown Rats try to go punk-disco piece of frantic quirkiness. There you go, I've used the word quirky, a word seemingly synonymous with XTC like curmudgeonly is for Van Morrison and acerbic for Elvis Costello.

I like the rumbling bass line on the vaguely white reggae-ish guitar-driven skank of Day In Day Out. It taps into the contemporary trend for these sort of rhythms, championed, of course, by The Police. It is one of the album's better cuts. Also carrying some appeal is the Talking Heads-esque jumpiness of Where You're Near Me I Have Difficulty. The vocals seem to be deliberately affecting David Byrne's style. That Talking Heads geeky nerviness is clearly something that XTC aspired to creating themselves. That it succeeded didn't stop the "poor man's Talking Heads" brickbats being thrown at them.

I am also impressed by the melodious new-wavey chug of Ten Feet Tall while Roads Girdle The Globe utilises that old white reggae groove again behind a robust slow punk thump. It has hints of The Buzzcocks about it, for me. Also slightly reggae-ish is the upbeat ska-punk of Reel By Reel. It contains a brief but excellent  guitar solo.

Tapping into the punk-funk thing was the also very Talking Heads-influenced tones of Millions, which has an excellent lengthy intro and lots of those Heads-ish frantically strummed "wires". It also has some fine post punk style sombre bass and drums passages. That Is The Way is a very 1979 sort of song, with, yes you guessed it, more of the feel of Talking Heads 77 about it. Unusually, however, it contains some fine trumpet work.

Outside World is probably the most punk cut, with echoes of the fist Joe Jackson album to it, in both its lyrics and frenetic sound. Also in the same mould is Scissor Man, which also has some impressive dubby bits. Complicated Game is a sombre, dark post punk groove to end on and is one of the album's stand outs, if only for its bleakness. It ends with a Ramones-like vocal chant that sounds like their "gabba gabba" thing.

** The stand-alone single from the same time was the jangly, upbeat Life Begins At The Hop, a sort of new wave meets rock 'n' roll pastiche that would have sounded a bit out of place on the album. I'm not convinced by it, failing to be one thing or the other.

Two other non-album tracks are the punky Chain Of Command and the Joe Jackson-esque and nicely bassy Limelight.

The group also followed this up with two further top twenty hits in the militarily-titled Sgt. Rock and Generals And Majors, both of which were fine, catchy pieces of punk-ish new wave pop. Both very late seventies/early eighties in feel. 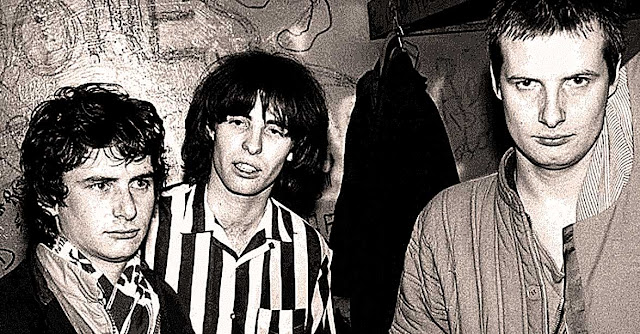