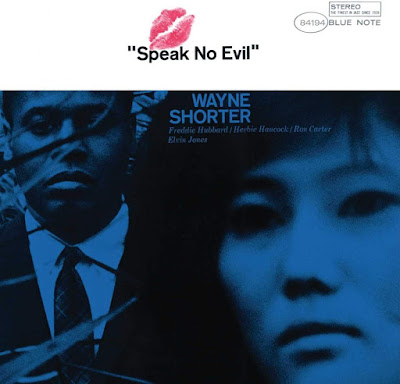 As regular readers will know, I know little to nothing of the technicalities of jazz. My research tells me that this 1966 album, regarded as a classic, was a mixture of hard bop and post bop with modal jazz. Yes ok, I'll accept that. What it is, for me, is three-quarters of an hour of clear, warm, deep and immaculately played instrumental, meandering, innovative jazz. It carries a lot of John Coltrane influence on it, being of an improvised style and at times, slightly less melodious than maybe it could have been, for my taste anyway.

The instruments used are a classic line-up of bass, drums, trumpet, Shorter on tenor saxophone and a young Herbie Hancock on piano. The drums, played by John Coltrane alumnus Elvin Jones, are rhythmically perfect and Ron Carter's bass as deep as a dark winter's night. The piano is crisp and melodic and Shorter's saxophone swirls tunefully all over the recording. As with a lot of jazz stuff, it is the bass that takes top billing as far as I'm concerned.

It is very much mood music, ideal for putting on while you do something else and, as always with these blue note recordings, the sound quality is excellent. The tracks do not really change much from each other, some are a bit more upbeat than others, such as the Coltrane-esque Witch Hunt  with its lovely bass sound, and the equally appealing Fee-Fi-Fo-Fum, but basically it plays as one continuous groove, going a bit slower and late night in feel on the sumptuously shuffling Infant Eyes. I will pick out the merging of piano, drums and bass on Speak No Evil as a highlight though, then when the saxophone comes in, it is pretty much perfect. The album is considered to have been an influence on many subsequent artists' work. Those breezy, piano and drum-driven jazzy outings by Traffic in the late sixties and the saxophone-piano-drum ones from The Style Council in the eighties owed this a lot.

I am a bit like a philistine reacting to art with jazz - "I don't know much about it, but I know what I like..". Sorry to all jazzers, but that's the way it is.

Also a nice track by Shorter is the beautifully mournful Lady Day that appears on Blue Note's True Blue compilation. 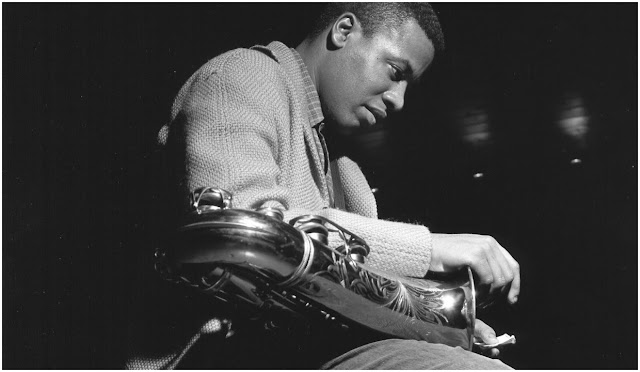 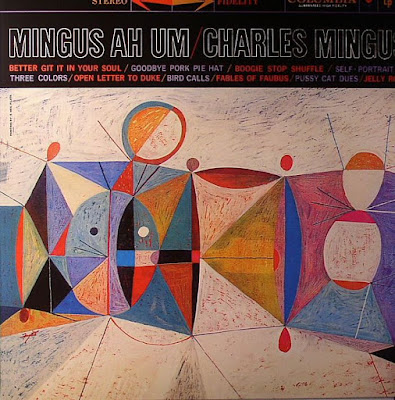 As opposed to many jazzers, who were saxophonists or trumpeters, Charles MIngus was a bassman. And what a bassman too. His style is beautifully warm and melodic. As a lover of bass I find myself lapping this up. The album is an inventive, varied one and has a certain unique quality to it.

Better Git It In Your Soul is a superbly bassy piece of instrumental improvisation as everyone seems to have free rein, encouraged by occasional shouts from the musicians. The gospelly handclap-saxophone bit is excellent. This is really incredible stuff for 1959, musically, and in terms of sound quality. The stereo sound is fantastic, just compare it with rock 'n' roll from the same period. Check out those drum too on the wonderful solo just before five minutes in. Those seventies rockers must have used this as a starting point.

The tempo drops on the moving and most atmospheric Goodbye Pork Pie Hat. I love late night, smoky jazz sounds like this with the bass throbbing slowly as the saxophone moans away into the early hours. There is a certain essential, elemental perfection to it.

Boogie Stop Shuffle is a gloriously upbeat number that sounds strangely like the inspiration for the Postman Pat theme. Mingus's bass is just wonderful on this and we are treated to another storming drum solo. Self Portrait In Three Colors is slow and bassily beautiful too, as now is obligatory. If you listen to this album, you're going to get good bass, I'll shut up about it now.

Open Letter To Duke is an impressive merging of fast and slow periods within the same track. Check out the musically light-hearted bit right at the end. This is an album that is far more varied than, say, Wayne Shorter's Speak No Evil, that I discussed above this one. Listen to Mingus's bass rumble and roll on Bird Calls as he really lets rip, within the same genre, the tracks take you here, there and everywhere. The piano on Pussy Cat Dues takes us to the blues.

Mingus was said to have been notoriously foul-tempered. You would never have guessed it from his music. The bass solo on Fable Of Faubus is a delight. He looks fine on the picture below too. 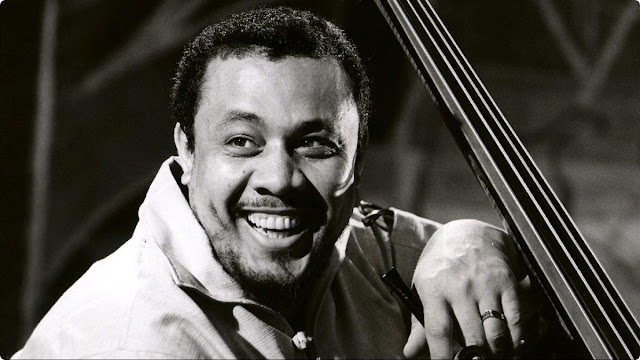 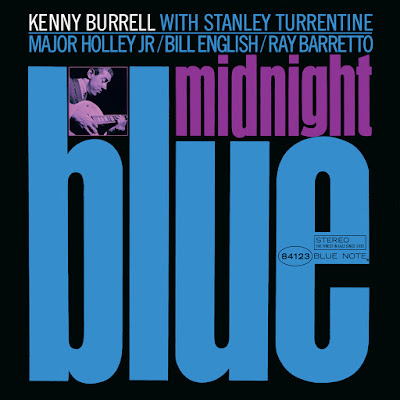 Another jazzman who wasn't a brass player was guitarist Kenny Burrell, whose best-known work is a lovely, light and melodic offering. It is a sleepy, generally laid-back album in comparison with the upbeat jazz of the previous two I have been discussing.

Chitlins Con Carne is infectiously rhythmic, featuring some killer saxophone, muscular drums and one of those intoxicating grooves. Mule sees Burrell really introduce that slow, trademark guitar sound as does the equally relaxing vibe of Soul Lament. Listen to that guitar and pick up what will have influenced The Style Council on The Paris Match.

The title track, Midnight Blue, is actually a faster number, full to the brim with catchy little guitars breaks and an irresistible groove. It is as perfect a piece of gently but enthusiastically sensual instrumental pleasure as you could hope for. That's a mouthful of a sentence, isn't it? I'm sure you know what Im trying to say - that the track is spot on.

Wavy Gravy is deeply warm and throbbing with bassy business as it bristles along - listen to those drums as they thump along behind Kenny's always inventive guitar and the insistent saxophone. Excellent stuff. The rhythms throughout this album are to die for. If you love deep bass and solid drumming, as I do, then this is for you.

Gee Baby, Ain't I Good To You is simply lovely in the cool guitar sound Burrell generates and Saturday Night Blues sees the saxophone to the fore. Incidentally, the saxman here is the well-known exponent of the instrument in his own right, Stanley Turrentine. Once again, the saxophone-drum-bass-guitar interplay is just outstanding. Many people get bored by jazz instrumental work, but I love it every now and again, just letting it wash over me. It is quite therapeutic.

There you go then, three quite different instrumental jazz albums that offer three completely separate listening experiences, all of which will show your hi-fi off at its best. 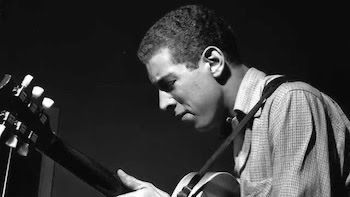