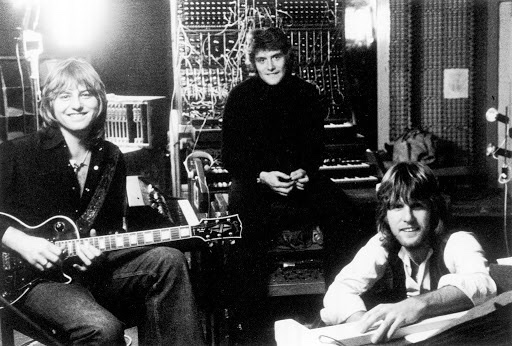 In the early-mid seventies, my teenage attitude to prog rock "supergroup" Emerson, Lake & Palmer mirrored that which I had toward their fellow proggers, Yes. I loathed them and everything they stood for - extended, indulgent LP side-long tracks, quasi-classical keyboard doodling, pompous or high-pitched vocals, lyrical pretentiousness, a predilection for fantasy in both lyrics and cover art and, above all else, my contempt for virtually every boy I knew who liked them (girls didn't like this sort of thing, on the whole, certainly not younger teenage ones). I hated those boys and their haughty musical taste, so I developed an intrinsic and - I have always thought - healthy aversion to all things prog.

Furthermore, as much as many people were talking about David Bowie or Roxy Music in 1972-73, it was albums by ELP or Yes that shifted units and often made it to number one in the album charts. In so many ways, theirs was the sound of the early seventies.

My attitude to stuff like this these days has changed in that I feel that t must have had something about it to be so popular, so I must give it a chance. That is what I am doing and my reviews come not from the position of an ELP enthusiast but from the point of view of a detached observer, many years after the group's time.

The music is centred around Keith Emerson's mighty keyboard sound, which either grates or enthrals. For me, it is probably 70% of the former and 30% fascinating. Either way, the bloke could play, couldn't he? So could his mates - guitarist Greg Lake and powerful drummer Carl Palmer.

So, let's get those air keyboard poses out.... 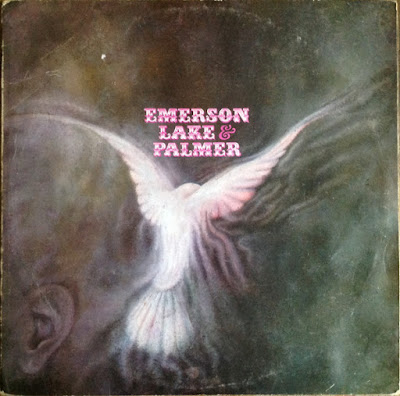 For all my introductory doubts regarding ELP's output and my reactions to their music, I simply have to concede that this was a ground-breaking and highly influential album. Many progressive rock groups and indeed, heavy rock ones were inspired by this adventurous, innovative merging of classical keyboards and heavy rock on what was largely an instrumental and highly uncommercial album. It was amazing, really, that inaccessible stuff like this was such a huge success at the height of singalong pop.

The Barbarian kicks things off with some sombre, sonorous organ, followed by heavy riffing before we get a delightful piano and cymbal part. It really was quite unique at the time and remains so.

Take A Pebble starts out sounding like, would you believe, The Style Council (so Weller secretly listened to this?) before progressing into sort of freestyle jazz workout, full of infectious percussion and piano bits. It is actually quite un-prog in parts. The guitar bit after about four minutes is very Yes, however.

Knife-Edge is a heavy, organ and drum-dominated rock track with a sound and vocal delivery influenced many a heavy rock band, subsequently. I have to say that I quite like it. It has a late sixties freakiness abut it lingering around in its organ breaks. Some of the heavy riffs are speaker-shaking.

The Three Fates is full of gothic-sounding organ that sounds like Keith Emerson had gone berserk in his local church. It breaks into some Latin, rhythmic parts half way through and Emerson's freeform jazz piano must have inspired Mike Garson (of David Bowie fame).

Tank is a showcase for Carl Palmer's solo drumming and also gives us some nice heavy guitar riffing and sumptuous bass. Drum soloes now became de rigeur for every live prog or heavy rock gig. They soon became associated with seventies musical excess but here, on this track, Palmer's work is most invigorating.

Lucky Man is a nice ethereal, folky ballad featuring a sublime bass line and some excellent lead guitar. It was successful as a single and is one of my favourite tracks of theirs. It is almost like something Led Zeppelin would do on LZ III in places. It is most un-ELP in sound and style.  The track is far more compact than much of their more rambling work and is far the better for it. It does sit rather incongruously with the rest of the album, however.

I much prefer the looser and varied material on this album to the half-inspired, half throwaway fare that the more well-known Tarkus provided. 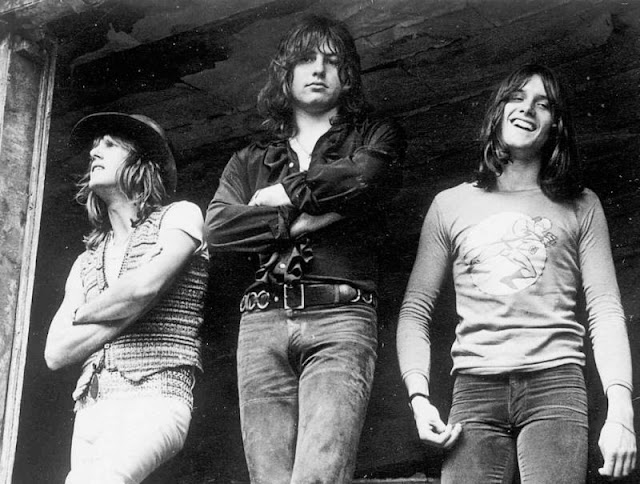 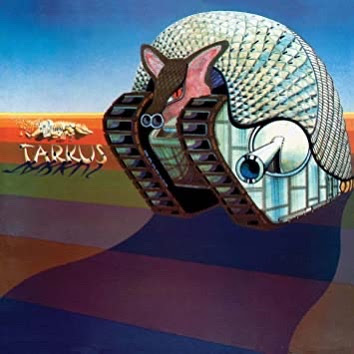 This was a schizophrenic album.

The old "side one" contained only one track - the twenty minute-plus opus of Tarkus. Like Yes, the group merged together several separate pieces of music under the umbrella of one title. I feel that ELP's material knitted together better than Yes's though. Where theirs was somewhat cut and paste, ELP's seemed to have more flow and cohesion, playing as one piece of music albeit with several changes of pace and ambience.

There is lots of keyboard virtuosity on here but also some excellent drumming and riffery too. As with all prog rock, I am able to sift bits that I really like from each track, but there are also bits that I could do without, for sure.

The second half of the album is, in my opinion, populated with short tracks of throwaway nonsense. It was maybe supposed to showcase the band's playful side, but it simply comes over as eminently disposable. Emerson loses his classical pretensions and goes all barroom and Lake is downright silly on Jeremy Bender. This was the era of Monty Python and clever chaps like ELP felt the need to be "funny". I would much rather the indulgence of Tarkus.

The album closer Are You Ready Eddy? is ludicrous bit of rock 'n' roll pastiche that would have been an embarrassment has anyone else recorded it. Here, it was treated as ironically amusing.

The Pink Floyd-esque The Only Way (Hymn) gets all serious when it references the holocaust. Unfortunately it just sounds clumsy and insincere in ELP's usually pretentious hands, however well-meaning it no doubt was. Infinite Space (Conclusion) has some nice funky, jazzy bits, however, and, if anything, is frustratingly short. Bitches Crystal is ok in a freaky-piano boogie sort of way, although the raspy vocal is very mannered. A Time And A Place is refreshingly heavy but it now sounds very contrived and clichéd in its vocal delivery.

I feel no need to experience this side of music again, although I have to admit that the Tarkus suite certainly has its moments. That's as complimentary as I'm going to get. I would have never have said that in 1972. 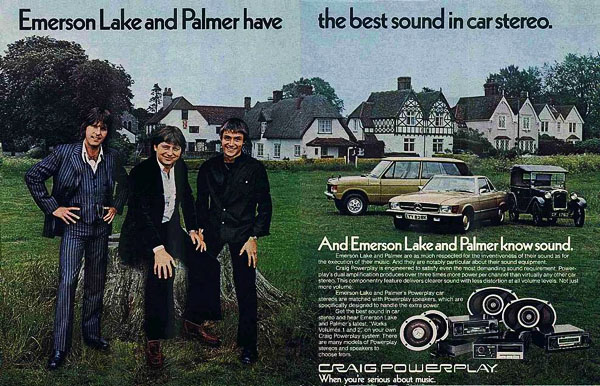 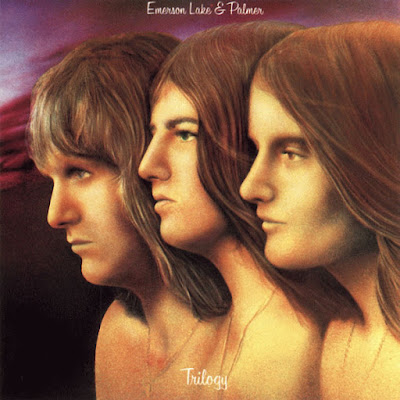 The Endless Enigma Part 1 features some surprisingly rhythmic bongos and some Eastern-sounding strings as well as powerhouse drumming from Carl Palmer. It is another of those multi-passage suites, although only a six minute one this time. As with the group’s previous material, I like some of the parts, but find the vocal bits overblown and mildly irritating. It contains some of their heaviest sounds, though.

Fugue is a brief piano interlude before we get The Endless Enigma Part 2, which is also brief, but carries a rock power along with more annoying typically prog vocals.

From The Beginning is a gentle, acoustic, folky Greg Lake piece that has its appeal. To be honest, I much prefer these more regular songs to their instrumental innovations. There is always one on each album. Those acoustic strummed parts remind me quite a lot of Paul Weller’s early solo material. The song has a nice, bassier, more percussive alternative version too.

Now it all gets a bit silly. The Sheriff opens with a brief drum solo before the song proceeds into a strangely Band-like Western tale.  It ends with some ridiculous bar-room piano. The Western sound continues on the movie-theme inspired organ fun of Hoedown. Actually, it was based on a work by Aaron Copland, I wouldn’t know, but I recognise the melody. Look, all this stuff sounds great, audio-wise, but do I want to listen to it more than once? Sorry, ELP fans, the answer is an emphatic no.

Trilogy has some strong drum and synthesiser parts, but its classically-influenced piano leaves me cold for most of the track’s eight minutes. Some will no doubt hail this as an inspired work of instrumental genius. Me, I can’t wait to out something else on. It’s just not my thing, really. I have given it a chance, though.

Living Sin is a short,  vaguely Black Sabbath-ish serving of rock, not before time, either. One thing that is never in doubt on these albums is the quality of Palmer’s drumming.

The brooding, slow build of Abbadon’s Bolero is more classically-inspired fare that once more just doesn’t twiddle my knob, although it demonstrates the quality of my hi-fi.

Choosing to listen to this in 1972-73 instead of David Bowie, Roxy Music, Led Zeppelin, Free or even Deep Purple and Black Sabbath is something I have difficulty understanding.  I know many people love this but I just can’t get there. I refuse to dismiss it for any other reason than it simply isn’t to my taste, however. All those awards the group are pictured with below would seem to show that many would disagree with me.

Anyway, shall I do the next one as well, before I leave prog behind? Oh go on then. 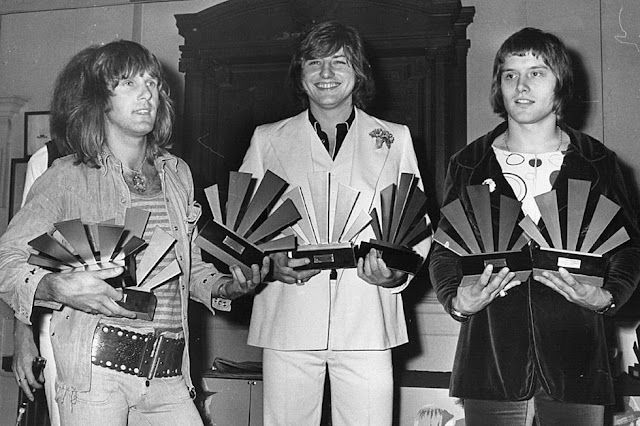 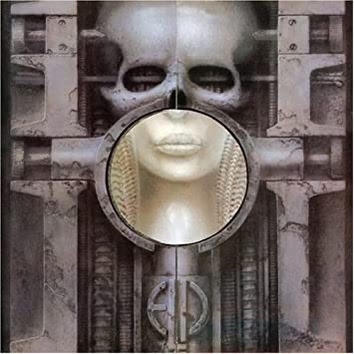 So here we have one of ELP's most successful albums. Now, I love William Blake’s Jerusalem, (a socialist anthem later hijacked by English public schools) and ELP give it a fine thumping sound here. Somehow it fits that this hymn that was so beloved of privileged schoolboys was covered by a group that those boys went crazy for.

Tocatta featured some typical Emerson keyboard indulgence, along with some heavy bits that I quite like. A lot of it is a discordant racket, however. You can stick this, to be honest.

There is, as I said in the previous review, always one impressive “proper” song in each album, and this one’s offering is the Pink Floyd-ish Still...You Turn Me On. Why, it even gets funky at one point too, with some wah-wah guitar. If ELP made albums full of this sort of stuff I may have a different opinion of their work. This song was a good one.

As on Tarkus, ELP also felt the need to be “funny” on occasions, and this album’s rollicker is the ludicrous Benny The Bouncer, a track that sort of predates Ian Dury by several years.

Then there are all the Karn Evil 9 variations. Oh fucking hell, I’ve had enough now. Proggy keyboards, proggy vocals, multiple changes of pace. You get the picture? That’s it. I’m done. 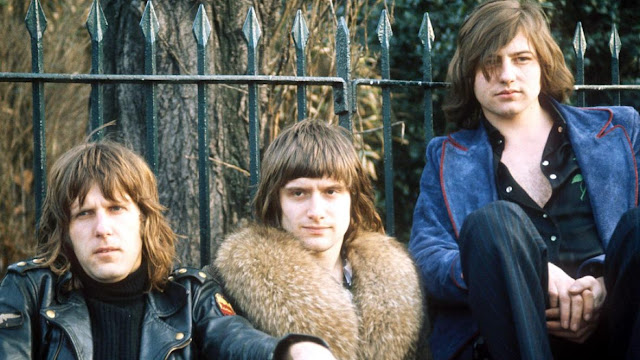 If, however, you have got the taste for more - check out these other prog-meisters :-
Email ThisBlogThis!Share to TwitterShare to FacebookShare to Pinterest