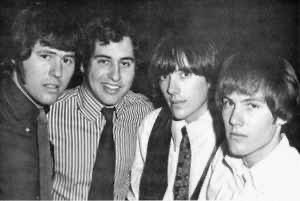 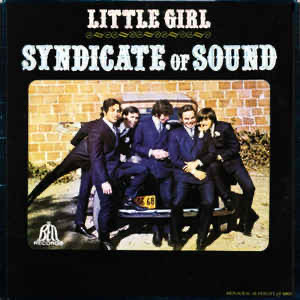 What a fine, relatively obscure album this is. As far as I can see it is the only album from this San Jose, California-based "garage rock"-psychedelic band. released in 1966, it has an excellent sound quality and an enthusiastic effervescence to it, although it is not as druggy or psychedelic as one might have imagined, being far more Beatles-ish poppy.

The group's name could almost be that of a Northern Soul artist, couldn't it?

Heavily-influenced by the British R'n'b-blues sound, Big Boss Man kicks off the album with a fast-paced groove, some piping organ breaks and typically mid-sixties rolling drum fills. It features some fine saxophone too. The track is an old blues cover, as indeed is Chuck Berry's Almost Grown, a catchy bluesy rock'n' roll romp about burgeoning adolescence.

The tempo drops for the veery early Beatles-influenced ballad So Alone. After the verve of the first two tracks, this is a bit of a wishy-washy let-down, however. It is redeemed by an impressive stereo sound. Dream Baby ups it a bit on a Cliff Richard-esque piece of tuneful pop. It also has echoes of Gene Vincent's Be-Bop-A-Lula. Once again, the sound and instrumentation is top-notch.

Rumors is a a robust, Byrds meets The Beatles and The Hollies number while the group's one hit, Little Girl has a very Byrds-influenced jangly guitar intro and a 1964-65 Dylan style vocal. It is underpinned by some excellent riffage and bass line. You can hear the sound of some of the new wave of the late seventies/early eighties in this. I'm sure the Flamin' Groovies paid this a lot of attention.

That Kind Of Man is a mid-sixties Rolling Stones and Kinks clone of a song, both musically and lyrically. It has a very Ray Davies-esque cynicism in its characterisation of the song's subject. Of course I recognise I'm Alive as being a big hit in the UK for The Hollies. This version is a competent Byrds-like cover version that betrays the group's clear UK influence.

You is a dreamy pop ballad with a nice bass line and flute break and an overall pleasingly laid-back ambience. The lead vocal is tuneful and really rather calmly beautiful, almost country rock in its airy feel. Lookin' For The Good Times (The Robot) is a bouncy number with a killer guitar riff and irresistible catchiness. When punk morphed into new wave, so many groups adopted a sound based loosely on stuff like this and were happy to be considered sixties throwbacks.

Ebulliently rocking is The Witch, which has a pre-Dr. Feelgood energy to it. It is one of the album's most enjoyable, kick-ass tracks. Check out the virtuoso breakneck guitar solo and frantic drum sound. The album ends with the infectious country blues and jazz fun of Is You Is Or Is You Ain't My Baby?

Look, this is no work of genius, no Blonde On Blonde or Revolver, but is a well-played, always enjoyable album and, as I said, its sound quality is superb.