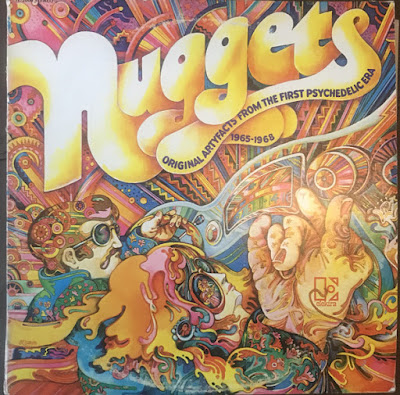 where the author, (Aphoristcal) is reviewing the hundred plus songs one by one, on a weekly basis. That is a gargantuan task that I will not be undertaking but I feel I want to record my feelings regarding the album, because it is an impressive one.

It covers the period from 1964-68 is US musical history and includes a bucketful of rarities that were filed under the genre "garage rock", "acid rock" or "psychedelic rock". Although some of the artists were better known, and some of the groups' members went on to bigger and better things, the groups concerned have a Northern Soul-style mysterious obscurity about them. I guess the genre is to rock and punk music what Northern Soul was to Motown and Stax.

Rather like US punk was different to UK punk, the music is is more rocky than its trippy UK equivalent, much of which can be found on the Decca/Deram compilation The Psychedelic Scene -

This US material is riffier, with more verve and attack and clearly was a big influence on punk and new wave. Indeed, the original double album compliation was curated by then DJ Lenny Kaye, who went on to be the bass player with The Patti Smith group. In fact, the sleeve notes are said to contain one of the first written references to "punk rock".

The influences on the material are many - The Beatles, early Rolling Stones, early Kinks, early Beach Boys and surf music, "mercury sound" Bob Dylan, Them, The Yardbirds and many others. In turn, songs like (We Ain't Got) Nothin' Yet by The Blue Magoos is very much the pre-cursor of Deep Purple's Black Night, with its bass riff that Purple subsequently played on lead guitar and Music Explosion's A Little Bit O' Soul was covered by The Ramones on their Subterranean Jungle album. You can hear punk and new wave hints all over the place and there are also huge debts to the British r 'n' b - blues bands in much of the material.

The Ramones covered four of the tracks from the album on their Acid Eaters album of covers and, for me, you can really hear the influence of this sub-genre on the early Blondie albums - short, frantic tracks like I'm On E, for example.

The album in its full, extended format only seems to be available on vinyl, although the original CD is still on sale here and there online. Neither of the albums are available via streaming, so I have managed to make up a playlist of around 100 of the tracks by searching for them individually from the track listing.

The sound quality is pretty good on most of the tracks too, although there are a few that sound a bit rudimentary.

I will just list my favourites as opposed to commenting track by track:-

Nobody But Me - The Human Beinz

Journey To The Center Of The Mind - Amboy Dukes feat. Ted Nugent

(We Ain't Got) Nothin' Yet - The Blue Magoos

Steppin' Out - Paul Revere & The Raiders

Hold Me Now - The Rumors

You're Gonna Miss Me - The 13th Floor Elevators

You Burn Me Up And Down - We The People

Last Time Around - The Dell-Vetts

Don't Look Back - The Remains

A Question Of Temperature - Balloon Farm

Oh Yeah - The Shadows Of Night (check out that Jean Genie-Blockbuster! riff)

It's Cold Outside - The Choir

One Track Mind - The Knickerbockers

Outside Chance - The Turtles

Out Of Our Tree - The Fabulous Wailers

I'm Five Years Ahead Of My Time - The Third Bardo

I Want Candy - The Strangeloves

Why Do I Cry - Barry And The Remains

Get Me To The World On Time - The Electric Prunes

I Can't Make A Friend - The Vagrants

Pushin' Too Hard - The Seeds

Are You A Boy Or Are You A Girl - The Barbarians

A Public Execution - Mouse And The Traps (a very Dylanesque number) 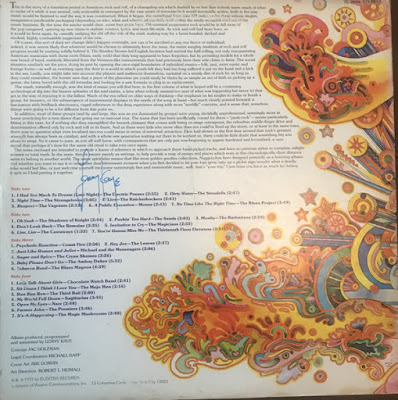 Also well worth checking out is Nuggets II, which features largely UK material. I prefer the US one for its poppier, often bubblegum-esque feel but there is also some good stuff to be found here. 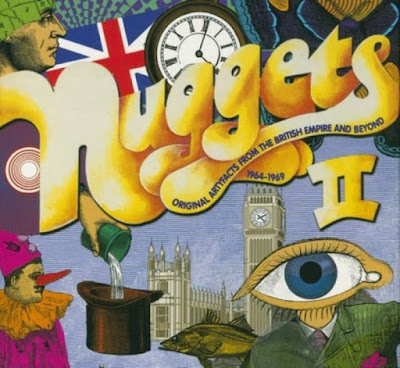