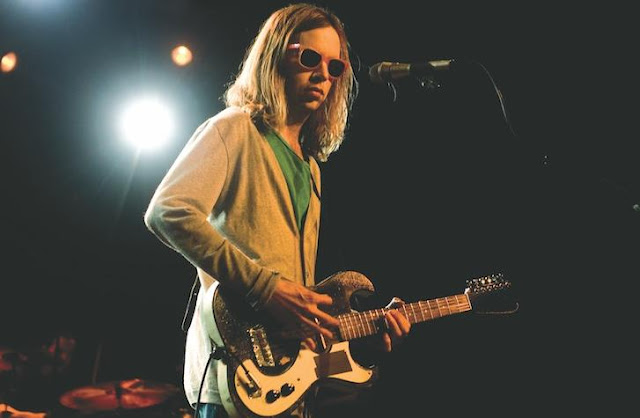 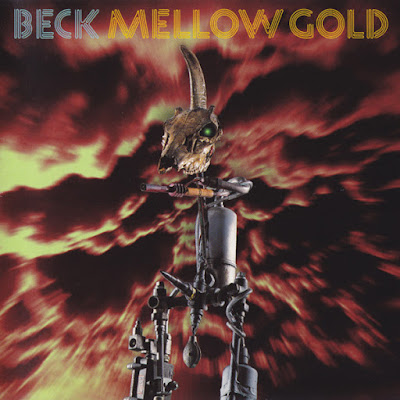 This was Beck's debut album, from 1994, and it was a clever cornucopia of rock, funk, rap, dance, psychedelia and even a bit of folky acousticness.

It has always sounded to me in places like Oasis meeting Prince and getting a singer to rap, with Elvis Costello to write the often wry lyrics. Genres and influences are fused willy-nilly it seems. Yes, it is completely eclectic and very difficult to categorise but is, by the same logic, also very unique. Look, I don't know a huge bunch about Beck or his work, but I have three of his albums that I picked up cheap, so I'll give it a go, reviewing what I hear. I am no Bexpert, though.

Loser blends acoustic and electric guitars with dance beats and pounding drums, along with gruff rapped-out vocals. It is a fuzzy, thumping urban nightmare of a track.

The acoustic but robust Pay No Mind (Snoozer) sounds like Lou Reed in both its delivery and lyrical cynicism. Nice harmonica solo on there too. The gloriously-titled Fuckin' With My Head (Mountain Dew Rock) is suitably psychedelic - the wayward, drugged-up child of the young 1968 crowd. It features some excellent guitar swirling all over it and a couple of Beatles-esque breaks in the vocals. It even departs into some bluesy riffing mid-song.

Whiskeyclone, Hotel City 1997 (title date set in the future) almost sounds like John Mellencamp at the beginning, before it becomes a sombre, sonorous Joy Division-like dirge.

Soul Suckin' Jerk is full-on urban rap, enhanced by some interesting background noises and a delicious big rumbling bass. Truck Drivin' Neighbors Downstairs (Yellow Sweat) is a fuzzy, dense migraine of a track with some amusing lyrics about the song's subjects.

The industrial grind continues on the bleak noise of Sweet Sunshine and the ambience is cleared somewhat on the bassily attractive groove of Beercan - listen to the bit around 1:45. Great stuff.

Steal My Body Home is a bleak, once again dirge-like number. It has that Talking Heads on The Overload miserable vibe to it. It includes those false scratching noises that were so popular at the time and also ends with a bizarre kazoo solo.

The acoustic and witty Nitemare Hippy Girl is another very Lou Reed-ish song, with hints of The Kinks in there too. The Velvet Underground (obviously) and early seventies David Bowie float around in the song as well. "She's got tofu the size of Texas" is a great line.

Some serious guitar fuzz introduces the garage assault of Mutherfucker (surely an ironic title). "Everyone's out to get you mutherfucker" wails the lyric - I'm sure this was all tongue-in-cheek. The album ends with the late sixties druggy-influenced morbid sound of Blackhole, a track that moans on way too long.

Of the three Beck albums I own, this is by far my least favourite. It has some good points and it is certainly most unique, but it is a trying listen, for me anyway. Would I pick this to listen to for forty minutes of pleasure over many other albums? No. Would I vaguely enjoy one of its tracks if they came up on a random playlist of mine? Yes. 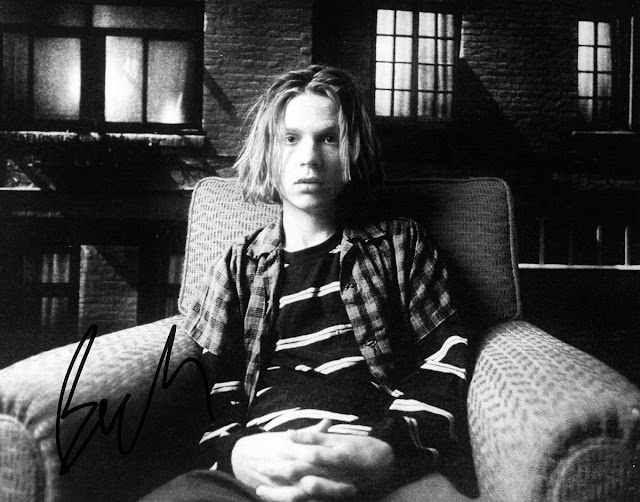 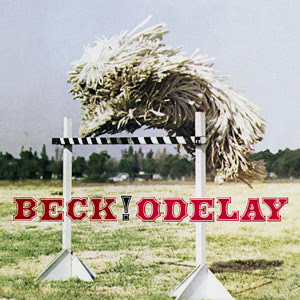 This was the Beck album, from 1996, that seemed to be everywhere - you couldn't go far in any music store without seeing that odd-looking dog of the cover. It became an acceptable and trendy album to say you liked and Beck's unique brand of jackdaw-like genre-dipping became something that pushed everyone's buttons. The album constantly appeared in 'best of' lists for 1996. I didn't get it for several year after that, getting it for next to nothing once it had hit the bargain bins.

As with his debut album, this, his fourth offering, was full of the now expected merging of rock,  dance, psychedelia, garage, punk, rap and whatever else Beck decided to chuck in. It is a much more appealing offering than Mellow Gold, though, in my opinion. I find that album a bit of a chore to get through, to be honest, whereas this one flows much easier through my hearing system. It is less discordant and the whole thing has more cohesion as an album. There is a vibrant, pulsating electricity to the album that no doubt contributed to its popularity. That said, I was never quite sure exactly who it appealed to, but there were obviously lots of people, as it sold bucketloads.

Devil's Haircut is an infectious bassy and grungy grinder of a track, featuring sufficient dance beats to interest that crowd as well as the indie lot.

Hotwax is a rap-influenced solid groove with some resonant bass and fuzzy, scratchy guitar. I always quite enjoy both these tracks.

Lord Only Knows has Beck dabbling in a vaguely country blues sound, not for the first time, in another Velvet Underground-influenced song. It also has hints of some of The Rolling Stones' Beggars Banquet material and also, more strongly, Live With Me from Let It Bleed.

The New Pollution is a great track, full of druggy late sixties Beatles influence and some infectious saxophone and organ sounds. It is a great piece of 'new psychedelia'.

Derelict has a thoroughly intoxicating deep rhythm to it and some very late sixties Eastern-sounding instrumentation. There are hints of Talking Heads in there too and also of Kate Bush's experimental late seventies/early eighties work.

Novacane is a riffy, grungy industrial rap number that ends up as a deliciously psychedelic workout. The bass line near the end surely comes from Jimi Hendrix's Third Stone From The Sun.

Jack-Ass samples Them's version of It's All Over Now Baby Blue and Beck delivers an enjoyably laconic, Lou Reed-style vocal. It also reminds me of U2 for some reason. That bass line near the end is superb too, as is the bluesy harmonica.

The rap-rock DJ vibe of Where It's At brings to mind something with its organ backing that I can't put my finger on. Whatever, it is a darkly enticing number. Minus has a frantic, punk-style riffy backing and similar vocals, along with some scratchy noises as well. It rocks big time, albeit briefly.

Sissyneck explores a twangy country sound alongside its contemporary dance-y shuffle. Beck dipped his hands into all sorts of stuff.

The crackly groove of Readymade has another of those irresistible bass lines, plus some fine buzzy guitar. High 5 (Rock The Catskills) is a fuzzy piece of rock-rap, Ramshackle dips into a mellow, reflective folky sound.

Overall, an interesting creative melange and much more listenable than Mellow Gold. 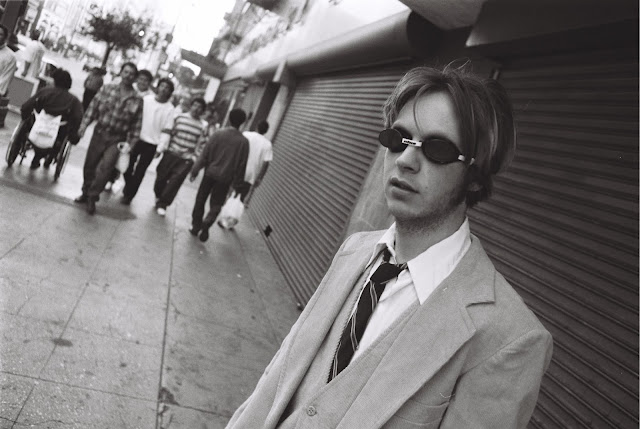 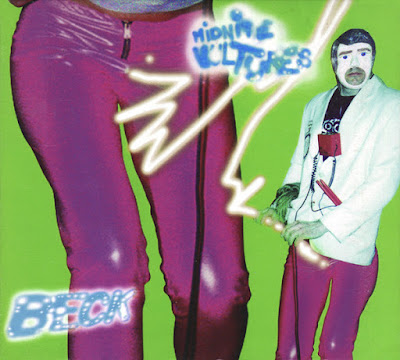 Sexx Laws/Nicotine & Gravy/Mixed Bizness/Get Real Paid/Hollywood Freaks/Peaches & Cream/Broken Train/Milk & Honey/Beautiful Way/Pressure Zone/Debra
The other Beck album that I own is Midnite Vultures, from 1999, which is easily the most accessible of the three of his offerings that I have. He channels his inner Prince and blatantly adopts his style and delivery on occasions, yet got away with it. The album is full of enjoyable funky, innovative pop. It is by far my favourite of the Beck albums that I am familiar with.
Standout tracks are the brassy, poppy Sexx Laws; the brooding, scratchy funk of Nicotine & Gravy (which sounds like Prince meeting late eighties-era Little Steven); the infectious, rubbery funk of Get Real Paid; the most obviously Prince-inspired track, Peaches & Cream and the deliciously riffy but funky Broken Train.
The funky Mixed Bizness is lyrically witty and musically quirky, with more Little Steven-style beats and vocals (listen to the latter's Revolution album and you will know what I mean). Hollywood Freaks taps into slow-groove hip-hop beats and uses rap-inspired vocals. Great bass on it too.
Milk & Honey has some big riffing on it, along with a jerky but totally infectious beat. It is a bit Talking Heads-esque. Beautiful Way has a mysterious, slightly African-style percussion sound to it together with a sleepy, beguiling vocal. It reminds me slightly of U2.
Pressure Zone features some great guitar and Debra finds Beck going full on Prince, sexy mode style, as well as being backed by a beautiful bass. It also features one of those irritating "false" endings, where the track lasts twelve minutes but seven minutes or so is silence until in the last minute you get some pumping instrumental. All pretty pointless.
That is a minor gripe, however, because all the tracks are good, to be honest, dripping with funky inventive verve. I really, really like this album, yet I have probably written more about the others. Odd that, and is something that often happens. The quirky, varied aspects of the others seemed to demand more comment. 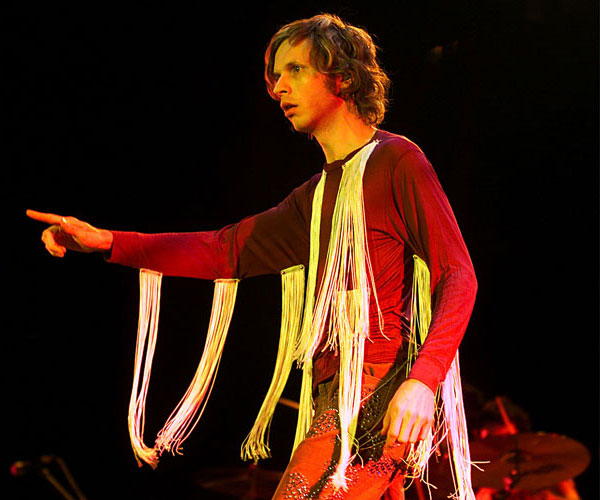