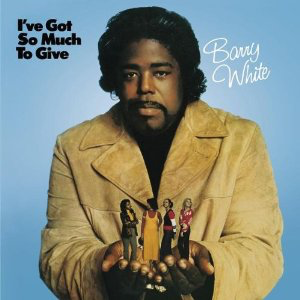 Firstly, the remastered sound on this CD is superb. No question. Clear, warm, bassy etc etc.On to the album I have always had a problem. Great to hear the two great singles in the fully extended form - his first big hit  I'm Gonna Love You Just A Little More Baby and the lesser-selling I've Got So Much To Give but it is the first two cuts that have never done it for me. Barry's cover of The Four Tops' Standing In The Shadows Of Love is, to be perfectly honest, a bit of a mess. Some of Isaac Hayes' extended covers of soul classics suffer similarly, but not as badly as this one. For me, it just never takes off. I'll stick to the original, unfortunately.

Then there is Bring Back My Yesterday. Again, I just find this one disorganised and at times discordant as if Barry hadn't quite found his groove yet. I've Found Someone is a bit better, but there is far better to be found on Stone 'Gon, Can't Get Enough and Just Another Way To Say I Love You.

Sorry, Barry. Still love you. The "loverman" thing is ok with me too, Just an amusing/appealing thing of the age. 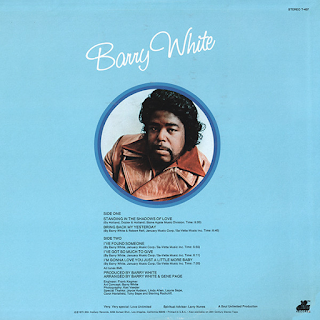 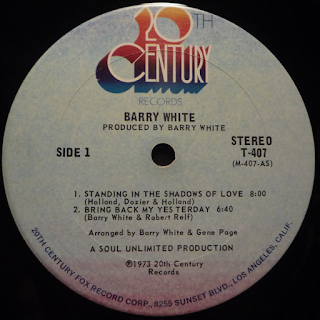 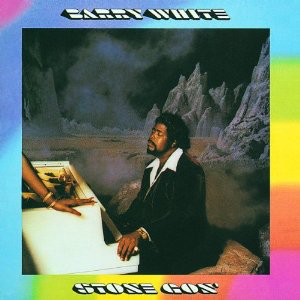 Girl It's True, Yes I'll Always Love You/Honey Please, Can't You See/You're My Baby/Hard To Believe That I Found You/Never, Never Gonna Give You Up

Just a few months after his adventurous, but at times patchy, debut album, Barry White was back with his mixing of spoken “seductive” monologues with sweet, laid-back, sexy soul into extended outings. Backed by musicians of the highest order, as with the previous album, these extended workouts meant albums of only five songs. Isaac Hayes had laid down the blueprint for this sort of thing, whereas his songs tended to remain one-paced throughout the groove, White’s songs often started slowly, with a growling spoken intro and eventually morphed into a climactic finale when the meat of the song kicks in and, comparatively, orgasm is achieved, albeit aurally.

Edited versions of some of the songs became big chart hits. The two on here are the more rhythmic Honey Please Can't Ya See and the very big selling, still popular Never Never Gonna You Up. He was a big chart star by now, and better was to come in his year of triumph, 1974.

The other tracks on the album, the somewhat ponderous Girl It's True, Yes I'll Always Love You, You're My Baby and Hard To Believe That I Found You (oh, those long, wordy titles!) follow the same slow seduction, wine and candlelight theme and are all pretty effective. For the half hour or so that these albums last, it is fine. Any longer than that, though, and one is wanting something a bit different. 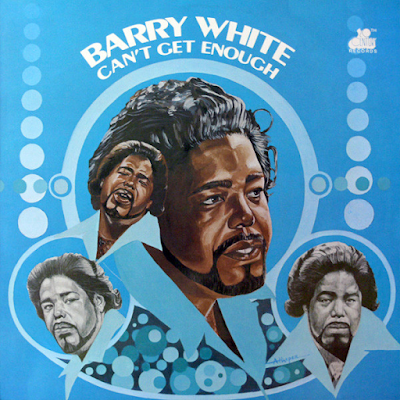 Mellow Mood (Pt. 1)/You're The First, The Last, My Everything/I Can't Believe You Love Me/Can't Get Enough Of Your Love, Babe/Oh Love, Well We Finally Made It/I Love You More Than Anything (In This World Girl)/Mellow Mood (Pt. II)

This was Barry White's most successful album, released at the peak of his powers in 1974, it contained two huge chart hits in the lively and soulful, pretty much irresistible Can't Get Enough Of Your Love Babe and the catchily orchestrated You're The First, The Last, My Everything, which is included here in its full version, complete with spoken intro before that now iconic intro kicks in. The whole album is about White and his orchestra's big, soul string production and nowhere is this exemplified better than on the ten minute slow burning, semi-spoken I Can't Believe You Love Me, which you imagine will eventually get going, but never does. It doesn't need to. It gives people more time to enjoy on the couch...

The album is bookended by two layered instrumentals in Mellow Mood's two parts. The album's remaining two tracks both show White's penchant for a long title in Oh Love, We Finally Made It and I Love You More Than Anything (In This World Girl). The strange thing is that lots of his songs have these long titles and I have trouble in remembering any of them. Anyway, back the music. The former is a Marvin Gaye-influenced soul crooner, featuring some sensual saxophone and sumptuous, rumbling bass backing White's deep, slow growling late night vocal. The latter is a slow burner that is slightly more upbeat than I Can't Believe You Love Me, but only just. It takes its time, shuffling along with White's vocal rarely getting into second gear, typifying his material at its best.

If one album of Barry White is all you need, it should either be this one or Stone 'Gon. The current 2018 remaster as included in the 20th Century Albums box set is truly outstanding too, excellent sound quality. 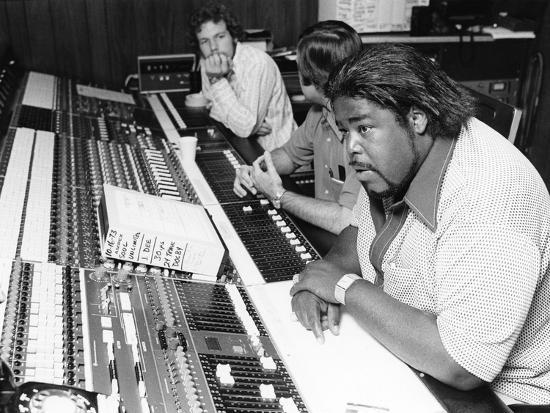 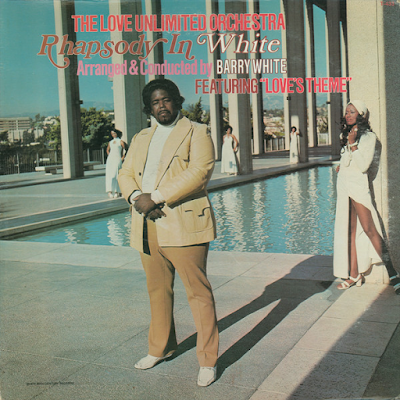 After two successful albums in 1973's I've Got So Much To Give and Stone 'Gon, Barry White oversaw this largely instrumental and highly influential album, adding vocals on a few tracks as well. It is pretty much like a Barry White album anyway, given that his actual albums contained lengthy instrumental passages. The album introduced string orchestrated, sweeping disco rhythms with that trademark "click-click" sort of guitar sound several years before disco became a genre. It was a sound that would see a million glitter balls attached to ceilings. Lush strings, staccato guitars and sublime production influenced so many producers and artists, becoming the sound of the mid-late seventies as much as any rock riffs, progressive experimentation or punk calls to arms. Listen to things like Michael Jackson's 1979 Off The Wall and you can detect the influence of this. In many ways it was way ahead of its time. It was similar to the albums from MFSB in Philadelphia from the same period, primarily instrumental but very far-reaching in their influence.

Barry's Theme launches the album with that guitar sound behind some rhythmic percussion before the trademark sound I was talking about kicks in. The strings float all over it and it has a superb atmosphere. The same applies to the beautiful Rhapsody In White with its wonderful bass line and addictive guitar sounds. The percussion is excellent throughout as well. Barry arrives on Midnight And You with a few growled vocals over a catchy funky melody.

I Feel Love Coming On has a spoken vocal intro before its intoxicating beat takes over. There is some excellent bass/drum interplay halfway through which return at intervals throughout the track. 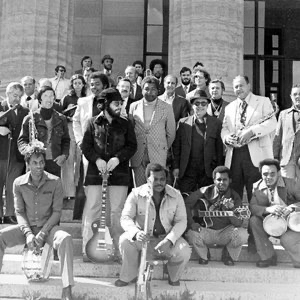 Barry adds his gruff, spoken vocal talents to Baby Blues in which he tells us, in his inimitable style about his lover's "baby blue panties...". Although it brings a chuckle when you listen to it now, it was actually quite risqué for 1973-74. It is very much a "lay down on that rug, baby..." song not only in White's vocal, but in the romantic arrangements.

Don't Take It Away From Me is another of those "chicka-chicka" grandly melodic disco smoochers. What A Groove has a solid, muscular, funky groove, full of bass and uplifting piano parts. It is a track, though, where you feel a full vocal would make it even better. The album ends with Love's Theme which is now instantly recognisable with its strings and that distinctive wah-wah quacking guitar sound. There is a really addictive bass and guitar passage near the end.

It is easy to overlook this as "just an instrumental album", but it is more than that. It is very enjoyable firstly, the sound is superb and it is actually an important, ground-breaking release. 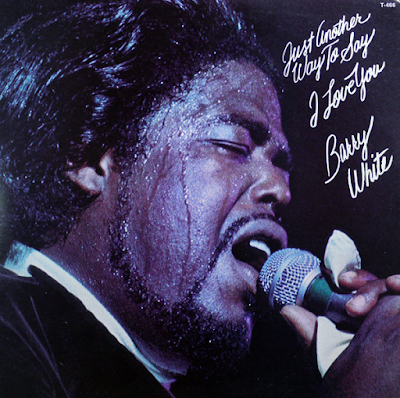 To be perfectly honest, after three excellent, innovative and genre-changing soul albums this fourth album from Barry White was starting to sound a little formulaic. His lush, beautifully orchestrated extended soul invocations to get it on had been something really different in 1973, but now, two years down the line, the punch and rhythm of disco was beginning to make itself known (ironically in parts due to White's Love Unlimited Orchestra's Love's Theme) and this sort of material was starting to sound a little dated, even after just two years.

Admittedly, White tried to up the pace somewhat with the slightly disco-ish rhythm of the (comparatively) upbeat Heavenly, That's What You Are To Me. The liveliness continues with the beautifully bassy I'll Do For You Anything You Want Me To (more of those long titles!). This was a hit single and was a good one. The laid-back "big love" feelings are back, however, with the sumptuous All Because Of You, which once again has White growling his exhortations of love to his lady over a sublime strings, lilting guitar and bass backing. This is classic stuff, but album after album of it was beginning to get a bit samey. 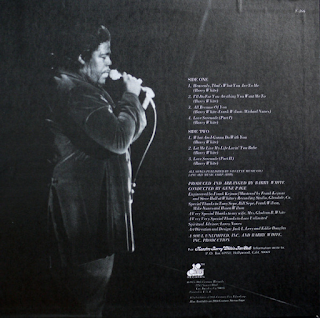 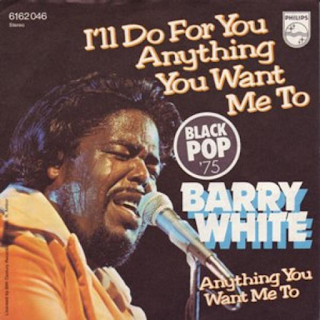 Love Serenade (Pt. 1) is almost a self-parody as White whispers "take off those clothes... I don't wanna see no panties....take off that brassiere..". He pretty much speaks the whole vocal over an insistent, big production backing. As corny as it undoubtedly is, you can't help but have an affection for this stuff. It makes me very nostalgic for the mid-seventies. The other commercial-sounding single was the energetic, soulful and catchy What Am I Gonna Do With You, which has another infectious bass line. After the animated feel of that song, it was time to settle down for the positively sleep-inducing ten minutes of Let Me Life My Life Lovin' You Babe. "All women are the same..." states Barry, once again speaking his vocals over an addictive, slow burning backing. After three minutes it kicks in to a gently sung soul ballad, but I think most would agree that, beautiful although it certainly is in parts, it is probably a few minutes too long. Having said that, listening to it now, I am really enjoying it. Love Serenade (Pt. II) is a thumping, bassy instrumental to end the album.

As I said, this was a bit of a "treading water offering", particularly in its chronological and cultural position. It has to be said that the sound on the latest 2018 remaster is truly excellent, although Barry's voice sounds a bit gruff throughout, that is, of course, nothing to do with the remastering, his throat must have been going through a bad patch. 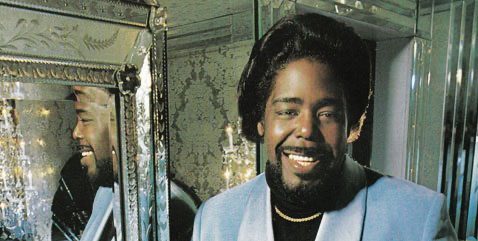 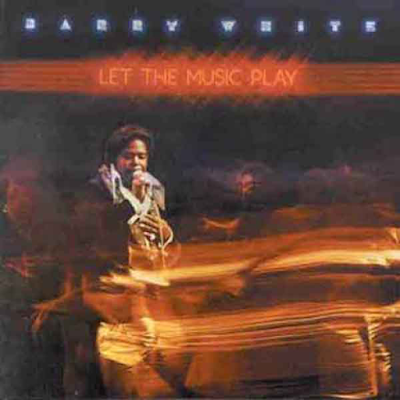 I Don't Know Where Love Has Gone/If You Know, Won't You Tell Me/I'm So Blue And You Are Too/Baby We Better Try To Get It Together/You See The Trouble With Me/Let The Music Play
Barry White's gruff "loverman" persona now extended into his fifth album and in places, however, it took in the disco thing that was sweeping all before it with some more upbeat material. The last three of the album's six tracks (it was a short album) are reflective of that. All three were hit singles. Lyrically it has switched from extolling the possibilities of hours of endless lovemaking on satin sheets to the downside of love and relationship problems.

I Don't Know Where Love Has Gone is a lively semi-funky, soulful opener, while If You Know, Won't You Tell Me is a convincing slow tempo ballad with a solid vocal. I'm So Blue And You Are Too is a return to White's typical, slow-paced seductive material, extended to a smoochy seven minutes. It is the only track in this style on the album though. It is beautifully orchestrated, as was usual for this sort of song and White's voice sounds in better shape than it had on his previous album.

The old "side two" features three excellent upbeat, disco-ish toe-tappers in the addictive, catchy Baby We Better Try And Get It Together, the utterly irresistible You See The Trouble With Me and the singalong Let The Music Play. While the previous album had seen White veering uncomfortably close to becoming formulaic. on this one he seems to discover a slightly different mojo. This is a disco album, but a Barry White-style disco album. 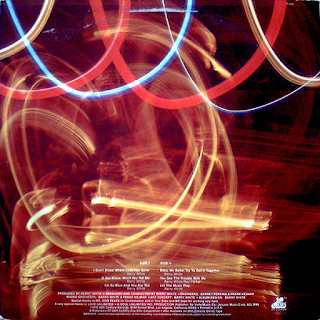 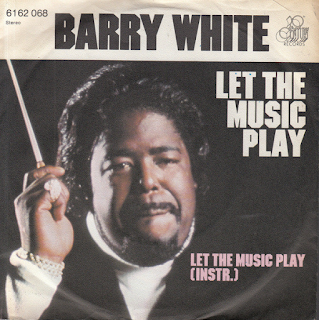