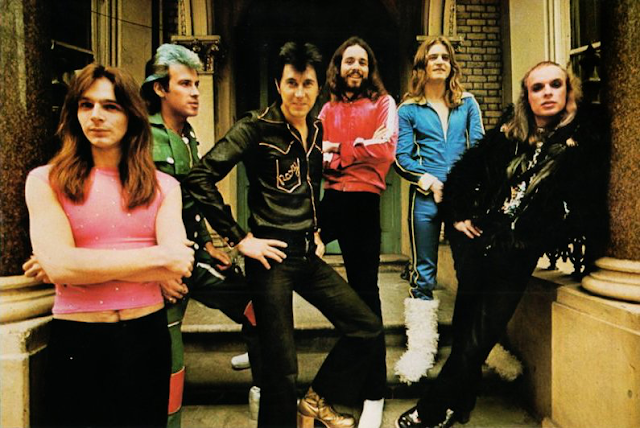 "All of us were from university art departments or art school, except for Paul Thompson, who had worked in a shipyard. And I think it was important to Roxy Music that there was one band member who was non-intellectual, very physical and just drummed. It was a surprise to us that we were so hugely popular in the mainstream. On our very first dates, when we drove around in my father's battered and unglamorous Austin with the gear on the roof, we were far more art-school. Bryan used to play at the side of the stage, because he wasn't quite confident enough to stand in the centre and sing; Eno was mixing the sound and also playing the synthesiser, so he would actually be in the middle of the audience - if there was one. Then, in the middle of the stage, there was this kind of black hole, where one or other of us might venture to play a solo. All of that changed with 'Virginia Plain'; when that became a hit single, we became a pop group - which we hadn't really thought about. Bryan had maybe thought about it: he'd wanted to be a pop singer, but hadn't quite got around to knowing how to do it" - Andy Mackay

For many people, Roxy Music mean the Radio Two stalwarts of Jealous Guy, Love Is The Drug, Avalon, Dance Away and Oh Yeah!, performed by Bryan Ferry in a white tuxedo and played in lounge bars throughout the land. For others, however, it is the strikingly innovative band that exploded on the scene with the single Virginia Plain in the late summer of 1972 that floats our boat.

They are a band of two distinct halves, like Fleetwood Mac (actually they had three) - the pre 1975 incarnation and the post hiatus one of 1979 to 1983. I like both of them, as it happens, but it will always be the early years, those five great albums and the singles that do it for me. In 1973, along with David Bowie and Mott The Hoople, there was nothing my fourteen year-old self liked better. I found a danceable solution to teenage revolution.....

REVIEWS - I have divided Roxy's career into two sections - click on the picture to read the reviews from the relevant period:-

Check out the solo work from various Roxy members:-
Email ThisBlogThis!Share to TwitterShare to FacebookShare to Pinterest