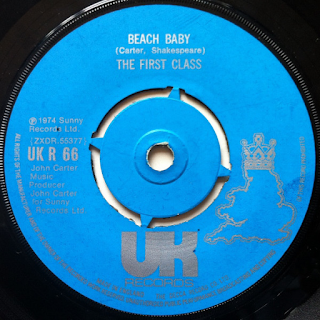 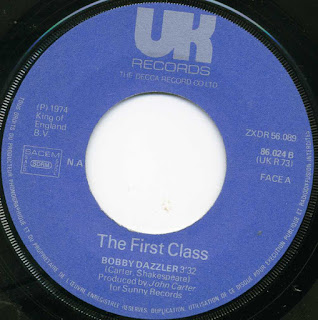 First Class were a short-lived group that included John Carter and the astonishingly well-travelled Tony Burrows (White Plains, The Ivy League, The Flower Pot Men, The Pipkins, Edison Lighthouse and The Brotherhood Of Man) and several session men. He must hold the record for having the most hits with the most different groups (I am sure he does).

Their one big hit came in the summer of 1974, released on Jonathan King's UK label, with Beach Baby - a song which is, for me, one of the greatest summer pop singles of all time, end of story.

It is a five minute plus Beach Boys surf era-influenced piece of summer majesty, from its opening US radio sample to its pounding, crashing drum intro through its many, glorious changes of pace and superb vocal harmony. It is being young, in love, happy, carefree and sweltering hot all in the one song. I simply LOVE it. If that is corny and cheesy - so be it.

Apparently the melody was influenced by a composition by Sibelius (the Sibelius estate sued and, it looks like they won, taking over half the song's profits) and also the Flower Pot Men's Let's Go To San Francisco. There was lesser chance of legal hot water there, however, as John Carter had written it. You can sort of tell with the Sibelius thing as the tune has a dramatic, classical grandiosity to it.

I just adore every last second of it, though, and that is about as much more as can be said. There is not too much additional trivia that can be added, no drug-addled recording sessions, other than Jonathan King listened to a demo of the song by candlelight in the power-cut 'winter of discontent' of late 1973 and realised he had a huge hit on his hands for the next summer. He was right.

The group had one other very minor hit called Bobby Dazzler, a very typically seventies song about a singer never making it with an "ooh sha-la-la" chorus that I have always remembered, before moving on to other things and in Burrows' case, no doubt, another group and another hit. 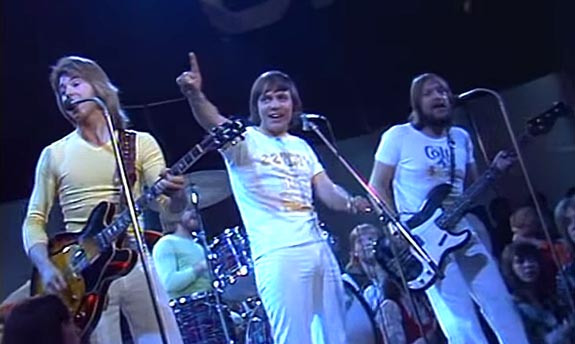