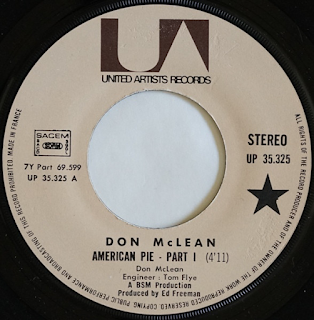 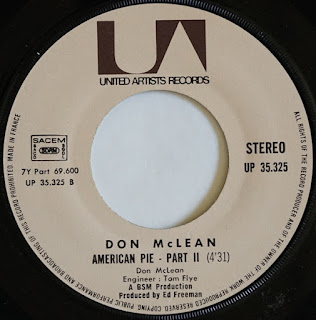 Released in late 1971 and coming in to my consciousness in January 1972 when it became a huge (number 2) hit in the UK - kept off the number one spot by Chicory Tip's glammy singalong number, Son Of My Father - this was one of those one-off songs that has become completely timeless and loved by many, whatever generation.

Written by Don McLean remembering initially how, as a thirteen year-old paper boy in February 1959, he delivered the news that Buddy Holly had died, along with Richie Valens and The Big Bopper, in a plane crash. Starting slowly and bleakly it suddenly breaks out in the a rocking beat and proceeds to be a veritable cultural and musical history and he introduces manifold references into the lyrics - James Dean, Elvis Presley, John Lennon, The Beatles, Karl Marx, Bob Dylan, Mick Jagger, Charles Manson, The Byrds, Sgt. Pepper and Altamont being the most-quoted ones. My friends and I spent many a time in the seventies singing along to every word.

I won't attempt to re-analyse the song as it has been done so many times before but will say that when I first heard the song it was a cold January afternoon in London at Queens Park Rangers football club (I went with a friend to watch his team, Oxford United). We were both thirteen, like McLean when he heard about Holly's death. It provided a neat association as January made us shiver, but we were captivated by the song rather than bad news on the doorstep.

Irritatingly, it was one of those lengthy seventies singles like The Temptations' Papa Was A Rolling Stone (from the same period) that got separated into two parts on the 45 rpm vinyl release which totally ruined the effect of the song. Thankfully, it was released in the CD era with the plaintive and beautiful Vincent tribute to Van Gogh and the country folk-ish Castles In The Air as accompaniments. 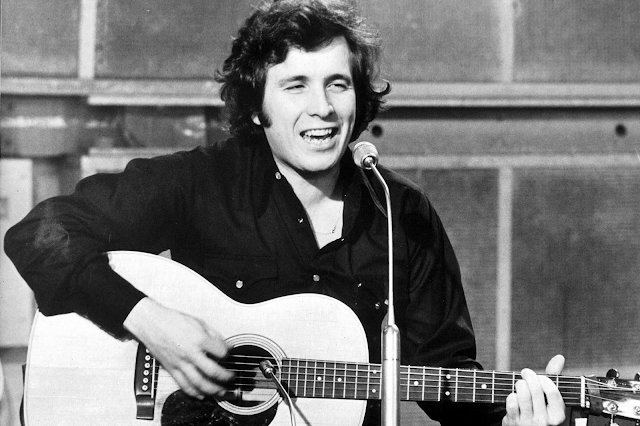 Incidentally, the much-maligned Madonna cover of the song is not a patch on the original but, taken in isolation, I actually quite like it. Madonna is a fan, just like the rest of us. Mott The Hoople also used to sing the first verse as an intro To The Golden Age Of Rock And Roll in their 1973-74 tour.

Maybe the last word should go to Bob Dylan (the "jester"), who was quoted in 2017 when asked about the song's reference to him -

"A jester? Sure, the jester writes songs like Masters Of War, A Hard Rain's A-Gonna Fall and It's Alright, Ma (I'm Only Bleeding) – some jester. I have to think he's talking about somebody else. Ask him".
Email ThisBlogThis!Share to TwitterShare to FacebookShare to Pinterest