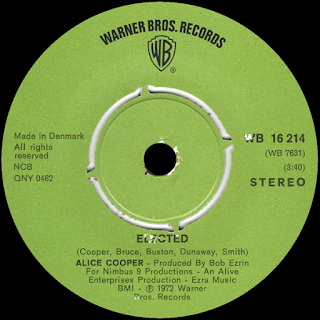 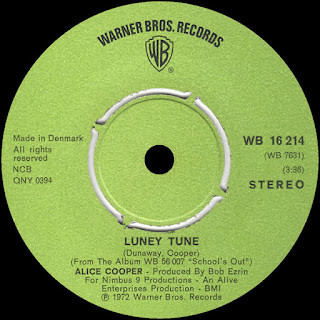 This was the first single that I actually used by own pocket money to go out and physically buy from a record shop - a rite of passage for many. I remember bringing it home, excited, one Saturday morning in November 1972 and my father allowing me to play it on his stereo system. The opening riff began - da da -da daaah... - the rumbling bass, then more guitars crashed in with the drums, followed by Alice's sneering but soaring voice. That sound stills brings a supreme feeling of nostalgia every time I hear it. I recall my father's smile as I looked back at him, delighted with this piece of aural nirvana. I think he was genuinely pleased at my pleasure, which was unusual as he hated rock music.

So there you go. A pretty credible first purchase, I think, particularly as Cooper was raising the hackles of the establishment - Tory MPs, vicars, headmasters and the like, all infuriated by his over-the-top macabre theatrics and apparent necromancy coupled with a dollop of satanism. He was the devil incarnate to them and that attracted me to him even more. His camp horror movie persona was lapped up by lots of us thirteen year-old boys - we loved all the fake guillotines and imitation dead babies. We also loved that a few months earlier, Cooper had told us that School's Out on one of the greatest anti-school anthems of all time. 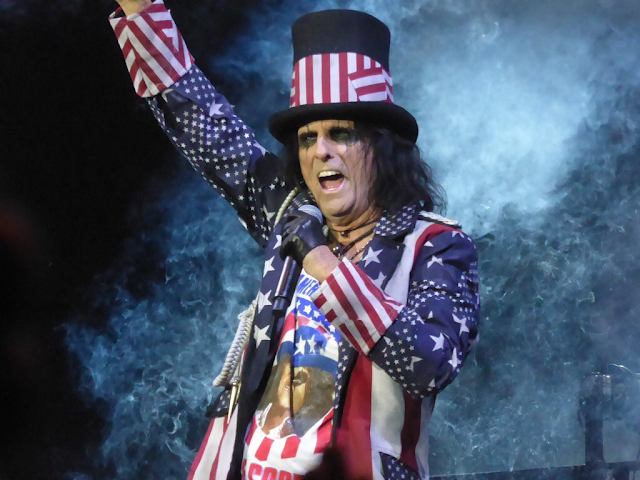 On to the song itself - it was a rousing rocker concerning US electioneering, with a full-on, hammed-up Cooper asking us to vote for him - "we're all gonna rock to the rules that I make..." and "the kids want a saviour, they don't need a fake..." he promised/proclaimed but then, right at the end, like all politicians, he lets us down with "everybody has problems and personally - I don't care!". A classic tongue-in-cheek, turn-the-song-on-its-head ending to a vibrant, tub-thumper of a song. It is duly used by TV and radio stations year-in, year-out at election time, unsurprisingly.

Its 'b' side, Luney Tune, was taken from the previous album, School's Out, and is a mysterious Doors meets T. Rex riffy rocker, enhanced by an orchestrated backing. It is a marvellous piece of glammy, showy fluff. Perfect for all connoisseurs of quality glam. Its unremastered sound is a bit muffled but it has a sort of proto-post punk feel to it with some hints of The Velvet Underground here and there too.

Cooper hit the heights of popularity with the accompanying, often outrageous Billion Dollar Babies album, but his star never rose any higher, commercially, 1971-73 being his halcyon years. As for me, within a few weeks I had bought The Jean Genie and then the Ziggy Stardust album and I was airborne...
Email ThisBlogThis!Share to TwitterShare to FacebookShare to Pinterest