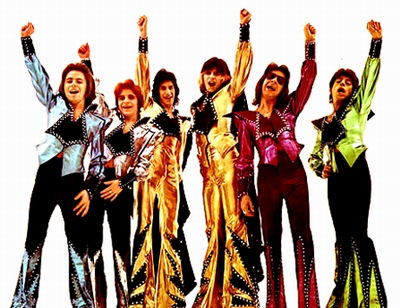 The Glitter Band and their producer, Mike Leander, have become unfortunately and unfairly besmirched by their obvious association with their disgraced erstwhile “leader”, Gary Glitter. He has effectively been written out of music’s history and they have gone down with him. You don’t hear Gary Glitter songs on the radio and neither do you hear Glitter Band ones.

At the time, at the height of glam’s preening, stomping power in 1974 ( maybe a little too late) the band behind the big G decided to release some music of their own. They utilised the double drummers with their pounding beat, the blaring saxophones and the glammy singalong sound of their work with Glitter.

They produced a whole series of glam singles and they weren’t bad either - from the stomp of Angel Face and the very similar (but ordinary) Just For You to the slightly more rocky but still chanty Let’s Get Together Again (one of my all-time favourite glam singles) to the perfect rock/pop of Goodbye My Love and The Tears I Cried - the hits kept coming.
The semi-funky Love In The Sun and the folky pop of People Like You And People Like Me and the vaguely proggy Don’t Make Promises You Can’t Keep rounded off their chart hits. Punk saw them off good and proper but not without leaving us some great tub thumping memories. My goodness, I love Let’s Get Together Again with a passion - that drum intro, those saxophones, the fist-pumping chorus. Glam heaven. 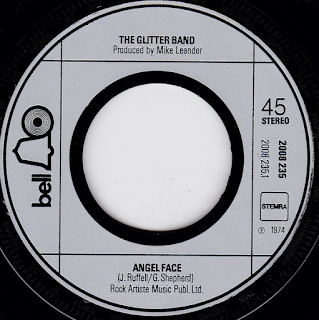 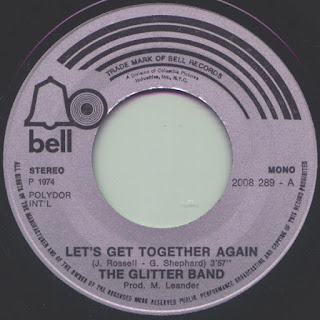 Another group on the Bell record label, Hello, had a hit with Tell Him but The Glitter Band covered it first. Personally, I prefer Hello’s version. The Glitter Band’s version packs one hell of a glam punch, though.
One of their final singles, Makes You Blind, saw them dabbling in disco/pop/funk. I remember Mud doing the same with Shake It Down. Oh dear. Actually,  both of them aren’t bad songs, but both groups should have stuck to glam.

They released a few albums too, such as Hey! and the clumsily-derivative titled Rock ‘n’ Roll Dudes, which contained the singles, some ok ‘b’ sides like the frantic Ballroom Blitz meets John Kongos sound of Rock On, Game’s Up, which almost sounded new wave-ish and glammy covers of rock’n’roll tunes like Sea Cruise, Twistin’ The Night Away and Sealed With A Kiss. These are pretty inessential though, as it is that great run of rousing singles that they should be remembered for.

Only three of the tracks from Hey! are not included on this compilation - a drum-driven, stomping cover of Baby I Don't Care and the run-of-the mill 'b' side I'm Celebrating and the GG-influenced Spencer Davis cover Gimme Some Loving. 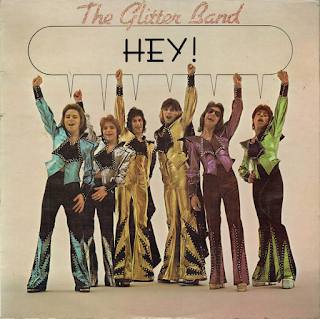 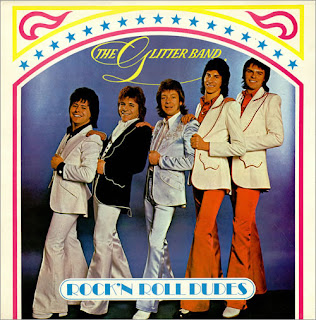 Incidentally, I saw them play at my university in 1981 in the student union bar when they were treated as a fun "ironic" nostalgia act. They were great and we all loved it, but I couldn’t help but feel a bit sad at the same time. Seven years earlier, they had ruled the teen pop world, now they were playing for pissed students replaying their youth.

As for “he who shall never be mentioned again”, suffice to say that taken in isolation, as pop singles, Rock ‘n’ Roll Parts 1 & 2, I Didn’t Know I Loved You Till I Saw You Rock ‘n’ Roll, Hello Hello I’m Back Again and I Love You Love Me Love were seriously great glam singles, some of the finest of their genre and a big part of my youth. Ask Oasis, they built a song around one of them in Hello.
Email ThisBlogThis!Share to TwitterShare to FacebookShare to Pinterest