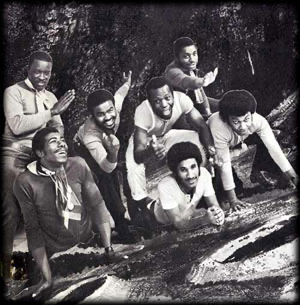 Time for some skinhead stomping now, with an archetypal "spirit of '69" release. Get those boots on....
Skinhead Moonstomp (1970)
Symarip 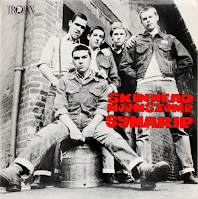 , previously known as The Pyramids (their name is almost an anagram of Pyramid) were best known for their one-off hit, Skinhead Moonstomp. Because of that cut's popularity, an album was necessary and it was probably the first album to be aimed directly at reggae's skinhead following. The link between stomping, rock steady reggae and the white, racist, violent UK working-class sub-culture was one of music's most bizarre crossovers. Whatever brought them together, it certainly worked and this album milked the whole thing big time. Pretty much the whole album references skinheads, boots and stomping with a bit of contemporary moon landing references thrown in. The rear cover shows the group clambering about on the surface of the moon. The front cover shows five uncompromising-looking white skinheads, questionable, maybe, but definitely culturally important. Many people at the time, however, thought the skins on the cover were Symarip, though.
The music is mainly rock steady, stomping fare, perfectly exemplified on the iconic title track, Skinhead Moonstomp, where "boss skinhead" Caleb gets all the skinheads stomping their boots as far away as the moon. It set a trend for semi-instrumental stomps such as Dave & Ansil Collins' Double Barrel and Monkey Spanner and moon-themed stomps like Derrick Morgan's Moon Hop and Nicky Thomas's Doin' The Moonwalk.
Ska influence is also prevalent in horn-powered, upbeat workouts like Phoenix City. Interestingly, the intro to Stay With Him is exactly like that of Toots & The Maytals' Sweet 'n' Dandy, until the song kicks in, which is different.

Another fine example of the reggae of the time, with its bleeping, reedy organ sound and fast rock steady beat is Skinhead Girl. "She wore braces and blue jeans..." accurately details the fashion. Although skinheads were a pretty loathsome cult, there is also something fascinating about them and their love for reggae. Skinhead Jamboree name-checks Dr. Marten boots and Ben Sherman shirts.

Nancy Sinatra's These Boots Are Made For Walking was tailor-made for the whole thing and is covered in true stomping style, with "walking" replaced by "stomping" in the lyrics. The altered lyrics also call to task skinheads for too much fighting. Must Catch A Train is a delightful piece of typically early seventies reggae with a Toots Hibbert-style vocal. Skin Flint is a fine, catchy instrumental too. Look, there's nothing earth-shattering about this album, it is just half an hour or so of good fun.

The original album has been released in an extended forty-odd track "deluxe edition" and the sound, although ok, has the limitations of the original vinyl recordings, still being a bit tinny. The best edition of the album, for me, by miles, is the Skinhead Moonstomp Revisited (New Stereo Mix) which has ironed out the tinniness and gives us a thumping, warm, deep bass sound, which is, of course, what all reggae should have. The sound in this version is one of the best I have heard from reggae of the period. Purists will hate it, no doubt, but I don't give a damn, it sounds great to me. It also contains two excellent dubby, extended versions of Skinhead Moonstomp and Skinhead Girl.
Related posts :-
Email ThisBlogThis!Share to TwitterShare to FacebookShare to Pinterest