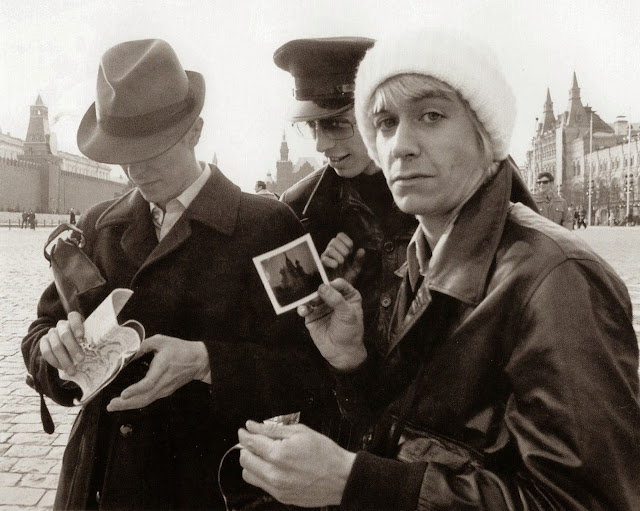 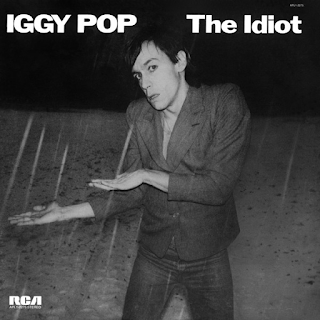 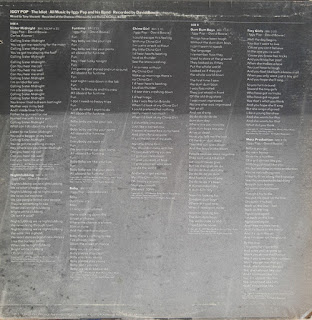 Three to four years after the proto-punk howl and scream of Iggy & The Stooges' Raw Power, David Bowie dragged his old decadent mate out of rehab and together they wrote an album of decidedly different music. It was a mixture of influences from Bowie's "Berlin" period - fragmented, fuzzy guitar, deep basslines and often discordant keyboards - and sombre, post punk before punk was over soundscapes. Bowie used the album, in many ways, as a kind of musical guinea pig for the sort of things he was considering for himself. He also played keyboards on it and toured the album, again supplying the keyboards. In many ways it is like a Bowie album with a different vocalist. Indeed, Bowie expert Nicholas Pegg has described it as "....a stepping stone between Station To Station and Low...".

The album also turned out to be highly influential on post punk, industrial and gothic artists, possibly even more so than the Bowie albums from the same period. Indeed, and chillingly, Joy Division's Ian Curtis died with the album still playing, apparently.

Sister Midnight is sung over the jerky, funky rhythm that would form the basis for Bowie's Red Money, on 1979's Lodger album, which was given different lyrics and a slight instrumental re-working. Here it is in its essential, bassy, chunky and very infectious form. It is full of brooding, mysterious, almost paranoid atmosphere. A bit like The Velvet Underground updated and developed, 1976-style.

Nightclubbing was memorably covered by Grace Jones. Once again it appears here in its pure-unadulterated, scratchy and menacing form. the music and vocals are edgy and unnerving. It begins with a drum beat that sounds like Gary Glitter's Rock 'n' Roll Part 2. Funtime is so very Velvet Underground, with a laconic Lou Reed-esque vocal from Pop and an insistent, dirty, claustrophobic riff throughout reminiscent of White Light/White Heat. It also was very New York punk in its sound. Baby is a shorter, Doors-ish number with an enigmatic, swirling organ and buzzy guitar backing. There is a lot of Patti Smith's material from the same period in this track too.

The world went on to know Bowie's own version of China Girl as his huge hit single from his bleached-blond hair era of 1983. It is presented here in an unsurprisingly starker, edgier form with Pop singing Bowie's line about "visions of swastikas..." as if there really was something in it when Bowie arrived at Victoria Station in 1976.

Dum Dum Boys is a lengthy, menacing grinder of a track. In many ways the punk meets post-punk essence is all over this one. It sums up the darker side of 1977 perfectly - forget two minute riffy thrashes and poppy new wave, this is one of the most essentially punk tracks there is. Pop's vocal is once again so Lou Reed. The Velvet Underground were alive and well, captured in this song's captivating, industrial insistence. Just check out that chunky, factory floor bass too. The eerie Tiny Girls sounds like something from Lou Reed's Berlin sung by a drunken Leonard Cohen. It is enhanced by some typically smoky saxophone from Bowie, who was a bit of an underrated player of that instrument.

Mass Production is another extended track, full of the sort of dense atmosphere that Joy Division would come to specialise in. It is this album's equivalent of The Doors' The End. It was prototype industrial electronica. By 1980, lots of bands would sound like this and release albums with monochrome covers too. Finally, listen to that wonderful swirling guitar/keyboard break at around 4:30. The moody feel developed here continues to the end. It is not a comfortable listen, but it is a strangely intriguing one. 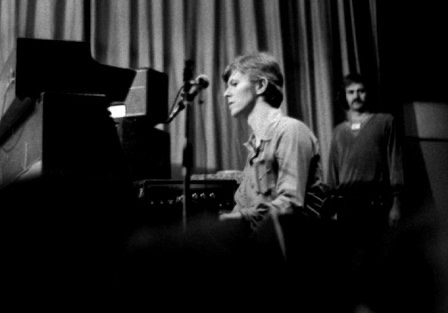 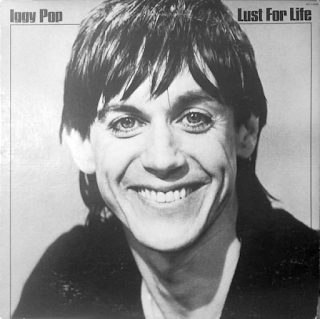 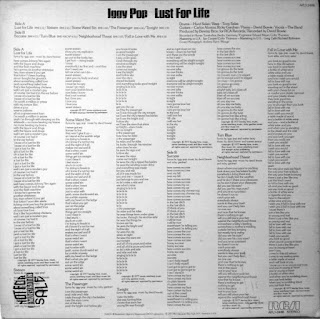 Released only six months after the beautifully industrial post punk strains of The Idiot, Iggy Pop was back with David Bowie again, this time adding the Sales brothers, Tony and Hunt, on bass and drums, who would go on to form Tin Machine with Bowie. There were still dark themes running through the album, but it is considered more of an Iggy Pop creation than a Bowie one. The Idiot had been seen as a Bowie album with Pop on guest vocals. Furthermore, this album is far more rock-oriented and "in your face" than the previous one. The sound, like on The Idiot, remains scratchy and gritty (words that often get used in describing the songs on both albums), but it sort of suits both the albums.

The cover is a departure from the monochrome one of The Idiot which featured a demented-looking Pop. This time we were greeted with a smiling, healthy-looking Pop appearing not unlike Liverpool's Kenny Dalglish. All very positive and above-ground. This was a daytime-hours album, not an after-dark one.

Bowie's self-composed (without Pop) Lust For Life begins with  that lively, pounding and kick-ass drum sound that instantly blows away a lot of those dense, dark soundscapes from the previous album. For the album's liveliest number, it was, perhaps surprisingly, an all-Bowie composition. Whatever, it is a classic track, full of great drums and superb riffs.

Sixteen, a Pop composition is a Stones meets The New York Dolls gritty, US-style punky rocker and Some Weird Sin is a Bowie rocker similar to the sort of material he would do with Tin Machine some twelve years later. The guitar solo in it is positively Ronson-esque, harking back to The Spiders era.

A true proto-post punk classic is The Passenger, written, funnily enough, by lead guitarist Ricky Gardiner, not Bowie or Pop, and containing lots of menacing, urban images - "the city's ripped backside...", for one. Despite that, though, it has an infectious riff and a singalong "la-la-la" chorus. Siouxsie & The Banshees did a great cover of it on their 1987 Through The Looking Glass album.

Tonight, of course, resurfaced recorded by Bowie on his 1984 album of the same name. Here is it is grittier, scratchier and containing an incongruous, Prince-like vocal introduction. The basic melody of the song is there, but the 1984 version is reggae-tinged and this one isn't, being far more industrial rock.

Success is a lively, almost poppy rocker delivered in a sneery, Johnny Rotten-inspired voice. It is a fine example of punk pop. It even has some glammy handclaps and there are considerable later, Loaded-era Velvet Underground echoes in there, for me.

Turn Blue is a seven minute, sombre number that dates back to a collaboration between Bowie and Pop back in the former's drug-addled state in 1975. It is suitably rambling and carries with it hints of Bowie's Somebody Up There Likes Me from 1975's Young Americans and the stop-start, dramatic vocal parts sound just like Prince would use a lot in the eighties. It is a difficult listen, though, and sits rather incongruously with the rest of the album.

Neighborhood Threat was re-recorded by Bowie on the Tonight album probably better than this one, which, although punky and lively, was murky in its sound. Fall In Love With Me has hints of The Passenger about it, although Ricky Gardiner was not involved in its composition. It is also very Velvet Underground-influenced. Par for the course. 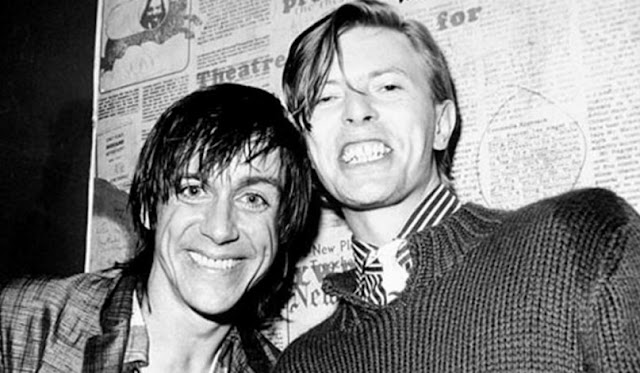