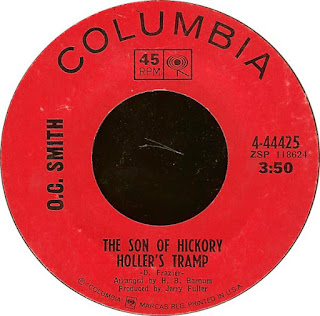 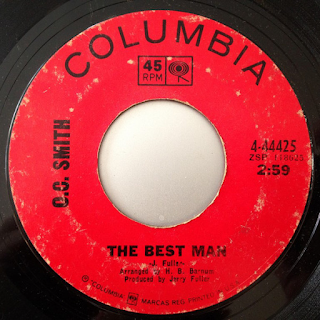 Some songs just bring back a time and a place and you remember them as if they are yesterday. Here, I am nine years old in our living room and I am lustily singing this to my mother as it blared out of our transistor - "the path was deep and wide from footsteps leading our cabin....above the door there burned a scarlet lamp.....and late at night the door would knock and there would stand a stranger...Yes I'm the son of Hickory Holler's tramp...". As well as being impressed by my vocal ability and performance, my mum also had the difficult task of explaining what prostitution was...

The song was a hit in the late summer of 1968 and was originally recorded by country artist Johnny Darrell. It was written by Dallas Frazier. It was a hit, however, for country soul singer OC Smith, who also had a hit with Little Green Apples. Smith had a bit of an Otis Redding-style voice. The song is soulful in a Chairmen Of The Board Patches sort of way and, for me, has always had a tinge of Northern Soul about it. True Northern aficionados would no doubt disagree with me but there you go. It is as Northern as Robert Knight's version of Everlasting Love, for example. 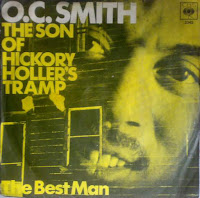 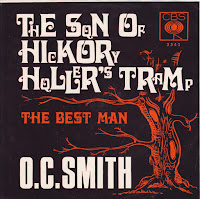 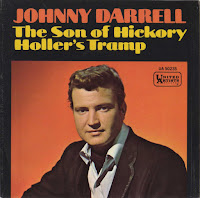 Lyrically, it has one of those tragic but ultimately heartwarming backwoods tale of a no-good drinkin', feckless daddy and a woman forced into prostitution to feed her fourteen children. Other similar themes of fortitude in the face of crippling poverty can be found on the afore-mentioned Patches or The Temptations' Papa Was A Rolling Stone. The seemingly ubiquitous character of Sally Walker is mentioned too, rather like that of the womaniser Jody, these characters re-occur in many soul songs of the period. Sally is the sort of girl who would notoriously steal away a husband.

The 'b' side is a standard soul ballad, The Best Man, which sees Smith having to do best man duties while his friend marries the girl he loves. Smith also sung the mournful Long Black Limousine, which was memorably covered by Elvis Presley on From Elvis In Memphis in 1969. Another fine song he did was the soft Memphis soul of Baby Come Back.

I have the song in two formats - the original one and a re-recording that has a fuller bass and drum sound, enhanced percussion and a better sound overall. I still prefer the good old original however. Get that transistor on. 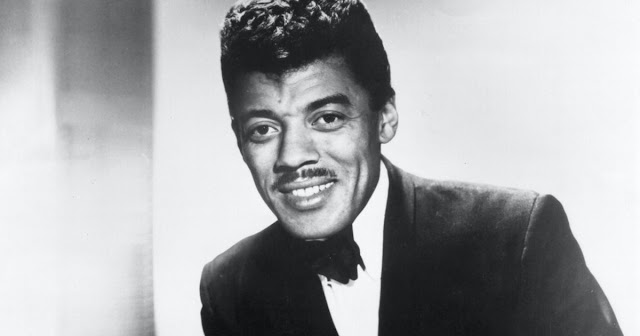