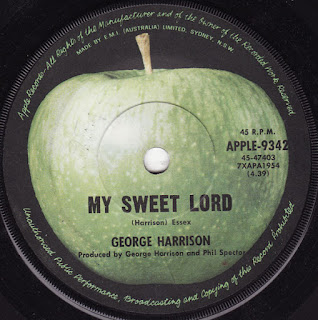 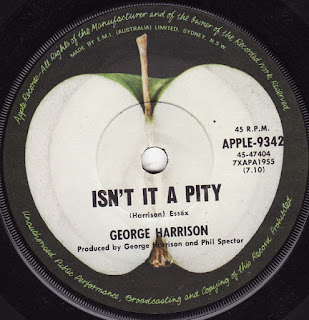 It was November 1970, I was now at Grammar School in Buckinghamshire, hating every minute, but this is one of the records that sticks in my mind from that time giving me more pleasant memories.

George Harrison had now gone full-on devotional in praise of the Hindu deity Krishna, and he also had a point to make about religious tolerance, no matter whatever God you had faith in. Despite its sincere, devout message, it was incredibly catchy and was a huge hit, the first member of The Beatles to go to number one. Notably, it also saw the first appearance of that comparatively unique slide guitar sound that would become inextricably linked to Harrison from then on. 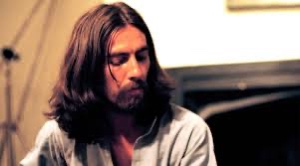 No longer a fresh-faced lad - the quiet Beatle - Harrison was now a proper beardie and the single was completely typical of his whole persona at the time. From its first strummed acoustic notes to that wonderful introductory riff, the track is a blissed-out piece of meditatory but melodic beauty. Harrison's voice is yearning, quiet and honest and the backing vocals infectiously subtle. When the drums kick in it is just inspirational, man. Hearing it still makes me feel almost painfully nostalgic - playing lunchtime football on cold, grey November days with this song in my head.

Many "names" feature on the recording - Phil Spector's wall of sound production, Billy Preston, Ringo Starr, Eric Clapton and Badfinger. Once into its groove, the song just carries on as various deities are invoked on an extended Hey Jude-style singalong fade-out.

There has always been serious controversy as to whether the song plagiarised The Chiffons' 1963 hit, He's So Fine. The legal case said Harrison had subconsciously done so. Personally, I could never really hear it myself.

The 'b' side is the dreamy, peaceful and extended rock groove of Isn't It A Pity, on which that guitar sound again dominates. Oasis would blatantly purloin the ending years later, I'm sure, or at least parts of it. 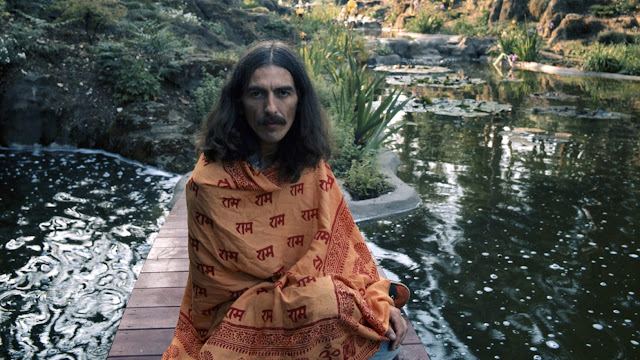