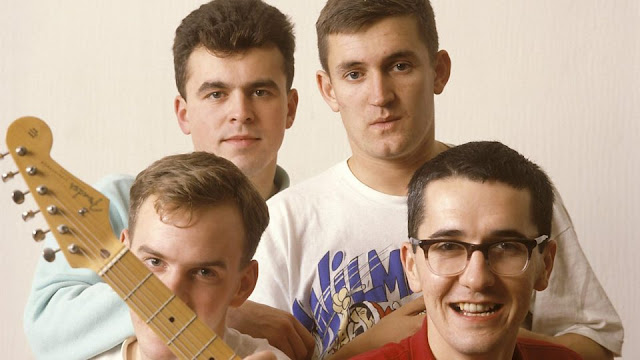 The Best Of The Housemartins 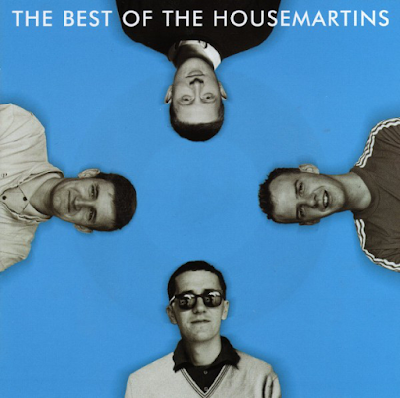 Happy Hour/Five Get Over Excited/Caravan Of Love/Think For A Minute/Me And The Farmer/Flag Day/Sheep/Build/There Is Always Something There To Remind Me/Anxious/Hopelessly Devoted To Them/I Smell Winter/The People Who Grinned Themselves To Death/I'll Be Your Shelter (Just Like A Shelter)
They were an odd entity, The Housemartins, formed in 1983 by Paul Heaton and Stan Cullimore in Hull, they became successful in the "loadsamoney", me first, 1986-87 period on the back of Socialist politics and a supposedly authentic working class credibility. Fair to play to them for that, but there was always something a little contrived and pretentious about them, for me. Bassist Quentin Cook (later to achieve mega-stardom as DJ Norman "Fatboy Slim" Cook) was from the comparatively wealthy Tory heartlands of Bromley in Kent as opposed to Hull and the always "challenging" character of Paul Heaton has vaguely irritated me for years, despite the fact that I love so much of his subsequent work with The Beautiful South. He referred to himself as P.D. Heaton during his time with The Housemartins, slightly for effect, I'm sure. Stan Cullimore's real first names were Ian Peter. Presumably he called himself Stan either as a nickname derived from footballer Stan Collymore or to enhance his traditional working class credentials. The former is more likely, I think, although I don't know, so forgive me if I'm wrong.

The band's line up changed several times in a short period of time, (Cook was the second bassist, for example) and another subsequent arrival was Dave Hemingway who also left when the band split, to form The Beautiful South with Heaton.

The group's sound was typical mid-eighties, "indie" jangly, guitar-driven but melodic pop, with a cynical, observation, wry style to their lyrics, much like The Smiths. Their breezy, upbeat sound suited the era perfectly but it was the pathos in their lyrics and innate sadness in Heaton's vocal delivery that made them stick out for me. Nowhere is this better exemplified than in their first hit, the irresistibly catchy Happy Hour. It is here that Heaton's sad beneath the surface voice was first heard by me. I have loved it ever since. Although I have always found him a frustratingly perverse character, his voice and lyrics have always struck a chord with me. It taps into the mid-eighties "fun" trend of pubs offering "happy hours" of cheap drinks. There was no happiness in Thatcher's Britain, however, (not for me, anyway) and the song's sad undercurrent emphasises that.

This is an enjoyable compilation for "part time" fans like me. The sound on the group's work has never been great, though, and has always suffered from being a bit tinny. 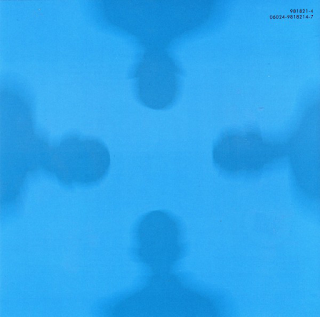 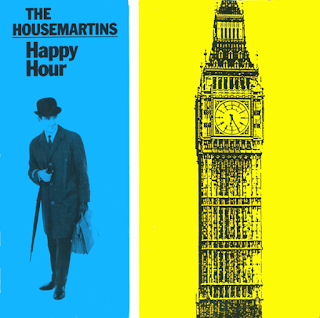 Five Get Over Excited is similarly frantic and poppy, a sort of Beach Boys pastiche mixed with that indie pop ear for a tune. Apparently, a lot of the group's long time fans were not happy with their surprise number one hit, an a capella cover of Isley Jasper Isley's Caravan Of Love. Not me, I absolutely love it. It is the finest thing they ever did and gets me all tearful every time I hear it. I won't hear a word said against it. Magnificent stuff. Heaton's finest moment, possibly, despite all his subsequent success.

The lovely Think For A Minute is precursor to The Beautiful South's material, featuring another fine vocal. Check out that wonderful Beatles/Billy Bragg-esque French horn solo too.
Me And The Farmer is a delightfully effervescent, lively number full of vocal harmonies and great guitar. It is simply irrepressible. The more restrained, slightly sombre Flag Day has a lovely, warm bass line before it breaks out into a big, dramatic chorus backed by more impressive brass.

Sheep has a similar frantic rhythm to Happy Hour and more cynical lyrics. Build is a great track, with a killer slow hook and another great bass, a real signpost as to The Beautiful South. Heaton's voice is again heartbreaking in its baleful timbre. Nobody delivers quite like he does. As I said, I will always love him for it.
There Is Always Something There To Remind Me is a bit low-key and mournful, lacking their usual joie de vivre but this returns with the infectious, almost rockabilly rhythm of Anxious.
Hopelessly Devoted To Them is another Happy Hour-influenced poppy number with more acerbic, wry lyrics. I Smell Winter has a thumping, slightly Motown-ish beat and another pre-Beautiful South feel.

The People Who Grinned Themselves To Death is a very Smiths-ish number and one of the first when you feel The Housemartins are sounding more like somebody else than themselves. The brass breaks are more their own, however.
I'll Be Your Shelter (Just Like A Shelter) is an initially evocative, plaintive, piano-driven ballad with a big gospelly chorus to end this brief and invigorating collection with. It is probably the album's most adventurous number. There are so many signs as to the potential Heaton and Hemingway had in this material. Not so much for Cook, for his success was the result of a huge diversification. 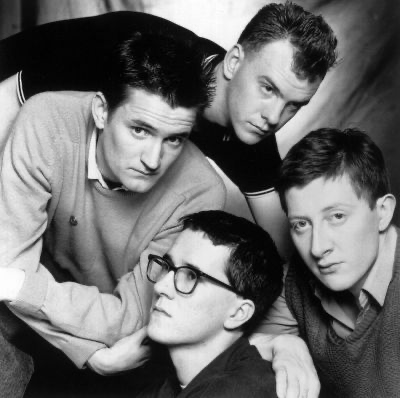 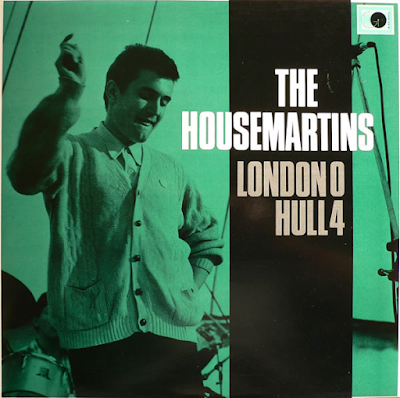 As an album, it was a most impressive debut offering and went along aside The Smiths, Billy Bragg and The Style Council as a bold statement for those of us who objected to the government of the time to hang our hats on. It is not merely throwaway pop, not at all. There are dark, often cynical and dispiriting messages contained within the admittedly infectious music. The Housemartins had all the anger, vitriol and rage of The Clash, The Jam or The Sex Pistols but they coated with a jangly pop sensibility which made them special. Paul Heaton and Dave Hemingway would continue that with The Beautiful South.

The tracks I have not covered are as follows. Get Up Of Our Knees is a typical piece of acidic yet melodic Paul Heaton political invective with his bitter message sweetened by an incredibly catchy tune. Heaton wants the disaffected to "not shoot someone tomorrow that you could shoot today...". Basically, stop moaning and get into direct action. Fair point, I guess, but I wonder what he actually did to back up his words. The same as me, I would imagine, carried on moaning... 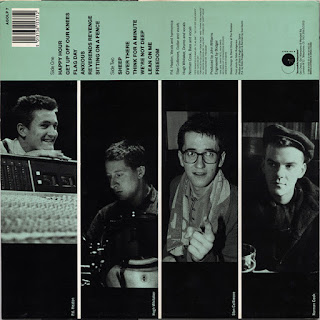 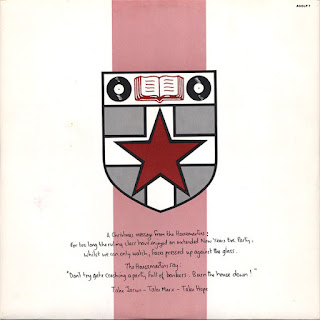 Reverends Revenge is a very Happy Hour-ish, lively instrumental which features a typically Housemartins beat and some pure 1964 Rolling Stones harmonica.
Sitting On A Fence is very Beautiful South in its sound and could easily have been from their 1989 Choke album. It features a bit of a drum solo followed by some funky bass and is a really good track, full of vitality and impressive musicianship.
Over There is a solid, bassy rocker that again sounds like the sort of stuff The Beautiful South would specialise in a few years later. There is a nice guitar solo part in the middle. These lads could play, something that was often overlooked.

We're Not Deep is irresistibly toe-tapping with a killer bass line and some uplifting vocals.
Lean On Me is not the Bill Withers song but an equally inspirational, plaintive, gospel-influenced Heaton (written with sixties veteran Pete Wingfield) song performed against a piano backing. Freedom is a sort of Motown meets punk stomper to end this short but rousing album.

The sound on the deluxe edition is an improvement on the original and it is always a genuine pleasure to dig this out. It is an often forgotten great album of the eighties, make no mistake about that. Highly recommended.

** The non-albums tracks include the excellent Elvis Costello meets Nick Lowe meets Billy Bragg thrash of Stand At Ease; the bassy, easy groove pop of You; a jaunty instrumental in Coal Train To Hatfield; a fetching a capella cover of Aretha Franklin's People Get Ready and the punchy, jangle pop of Drop Down Dead. All impressive tracks.

Added to that list is the frantic, harmonica-driven instrumental The Mighty Ship; another impressive a capella cover in The Hollies' He Ain't Heavy He's My Brother; a punky, vaguely Irish-sounding instrumental in Who Needs The Limelight; more unaccompanied vocal in the gospel of Joy Joy Joy and the amusing cod-rap of Rap Around The Clock.

The People Who Grinned Themselves To Death (1987) 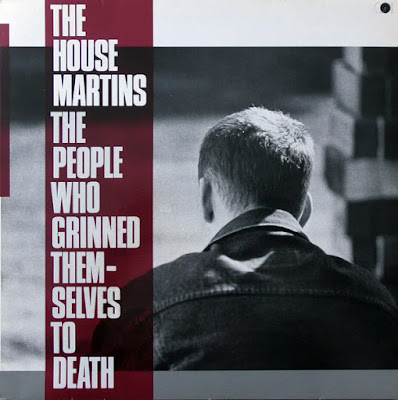 This, from 1987, was the second and last album from The Housemartins before they went their separate ways to other projects. It is less Smiths-influenced than their debut album and more Motown-esque in its bassy, rhythmic catchiness. Paul Heaton always loved classic soul/pop.

The People Who Grinned Themselves To Death is a vitriolic jibe against the Royal Family hidden behind the group's usual catchy poppiness. I find this a bit sour, to be honest - despite my left-wing politics and punk youth I've actually never bothered much about the Royals. I quite like the history of it all, so there you go - I'm as contradictory a character as Paul Heaton.
The breezy pop of I Can't Put My Finger On It has a delicious, deep bass line and a better sound quality the one was used to on Housemartins recordings.
The Light Is Still Green is a solid slowish ecologically-motivated number with a wonderful line in "wherever there's a will there's a motorway...". Paul Heaton, despite some shortcomings, was always a great lyricist, and indeed still is. 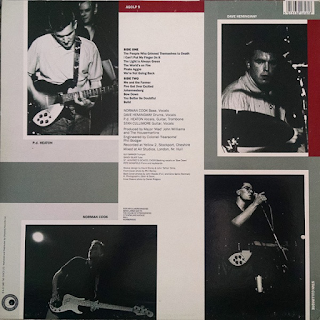 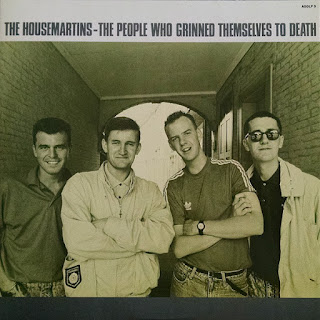 The World's On Fire is more chunky and riffy than many Housemartins tracks before it breaks out into a typical chorus. Pirate Aggro is a short  organ-driven instrumental.
We're Not Going Back is a solid riffy rocker enhanced by some bluesy harmonica. Me And The Farmer is irresistible from beginning to end with a fine guitar solo in the middle too.
Five Get Over Excited is delightful, upbeat bit of cynical Beach Boys meet the late eighties fun. It is full of great lyrics - too many to keep quoting.

Johannesburg is a slow acoustic ballad whose lyrics and meaning I have to say I don't really get. It is one of Heaton's more cryptic numbers. Is it about South Africa? If so, where? If where, what does it mean? Heaton was often a perplexing lyricist.
Bow Down returns to the archetypal Housemartins thumping and brassy pop sound. You Better Be Doubtful has a warm, bassy and melodic beat and another of those nasal but strangely evocative Heaton vocals. Build is a sad, baleful goodbye from this short-lived but actually quite ground-breaking and quietly influential group. 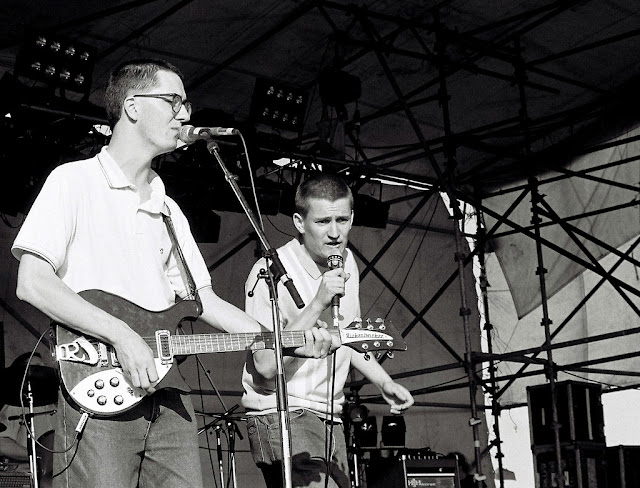