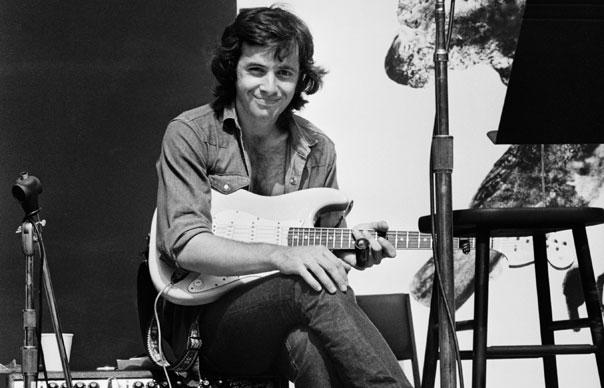 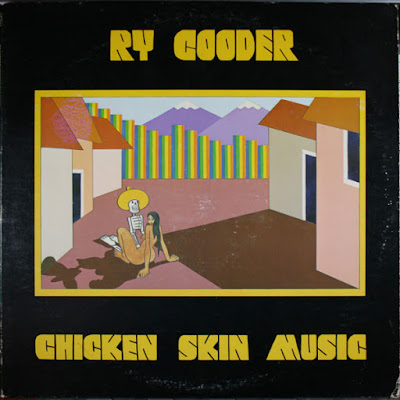 The Bourgeois Blues/I Got Mine/Always Lift Him Up/Kanaka Wai Wai/He'll Have To Go/Smack Dab In The Middle/Stand By Me/Yellow Roses/Chloe/Goodnight Irene
This delightful, comparatively underrated album from Ry Cooder dates from 1976. There is blues, country, folk, soul, r 'n' b, gospel and understated rock in here. It all mixes perfectly to back Cooder's pleasantly unassuming voice.

The Bourgeois Blues is a cover of a Leadbelly blues full of scratchy, pickin' guitar, harmonica and lyrics concerning racial segregation.
I Got Mine sees the instrumentation and overall improved somewhat from the earthy previous track. It is a slow-paced but solid number enhanced by some New Orleans funereal-sounding brass. It has a fetching old-style guitar solo before the song lifts up to a brassy, gospel ascension. Similarly uplifting is Blind Alfred Reed's Always Lift Him Up, which features a gentle Cooder vocal over subtle gospel backing vocals, some beautiful instrumentation and a Hawaiian gospel tune merged into the mid-song instrumental part. When this kicks in the result is simply lovely. Oh how quiet pieces of music can sometimes be so moving. Incidentally, the album was recorded in Hawaii. 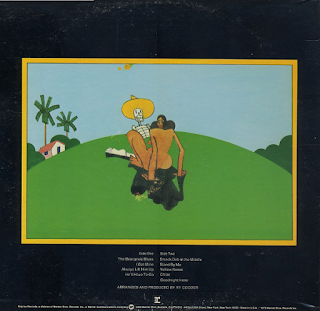 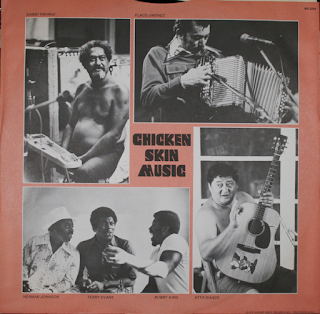 The Jim Reeves country standard He'll Have To Go is given a Tex-Mex/Mariachi makeover, with Mexican brass breaks and an almost reggae-style beat. Cooder's liking for a bluesy r 'n' b tune is satisfied by the syncopated, staccato strains of Smack Dab In The Middle. He liked to cover a classic too, and he does so here with a slow and soulful rendition of Ben E. King's Stand By Me made even more attractive with a Tex-Mex accordion.

Yellow Roses is a cover of an old Hank Snow country hit, given a bit of a Hawaiian makeover on the guitar parts. Chloe is a relaxing guitar-driven instrumental with jazzy hints. The album ends with another Leadbelly cover in Goodnight Irene that also has a New Orleans sound to it. Overall, this is a very enjoyable, low-key album that simply brings quiet pleasure. 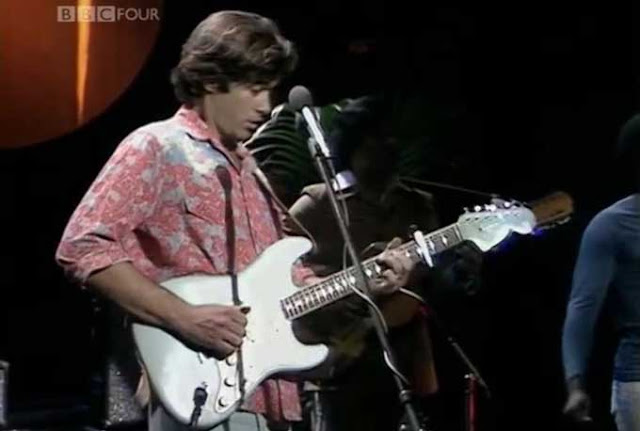 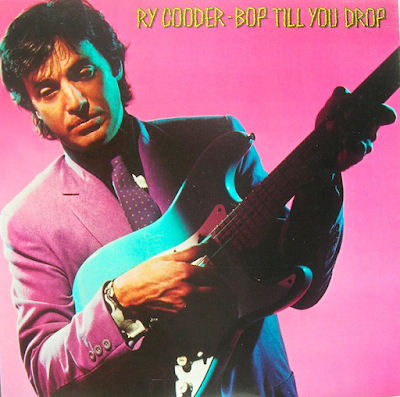 This was, on the surface, a thoroughly incongruous album from 1979, released as it was at the height of punk/new wave/disco. It is a laid-back serving of soul-influenced country/Americana rock that would have gone down well in 1972, but maybe not in 1979. Cooder didn't particularly look the part for 1979, either, being a throwback to the late fifties/early sixties in many ways. That said, it has always been critically-acclaimed. It is immaculately played by Cooder and his band, but its sound is a little low and lacking in punch, despite the album’s claim to game as the very first fully digital recording. In 1979 I was too bothered about The  Clash and The Jam to pay this any attention, but by 1984 I had got into it, as my tastes matured. It is actually a great album. I certainly love it now. The more I listen to it, the more I like it.

I have always liked the gentle country rock sway of Cooder’s cover of Elvis’s Little Sister. Although this is a good cover, I actually prefer the rock 'n' roll guitar-driven Presley version.
Go Home Girl is a cousin of The Rolling Stones/Arthur Alexander’s You Better Move On. Indeed, it is an Arthur Alexander song. No wonder I thought that. It is a fine track, full of close to the border Tex-Mex melodies and romanticism.
The Very Thing That Makes You Rich (Makes Me Poor) is a delicious piece of intuitive, melodic blues with a warm, bassy but subtle backing. Dire Straits will have loved this, no doubt. Check out the buzzy slide guitar half way through. A similar feel is found on the quality instrumental I Think It’s Going To Work Out Fine. Top notch musicianship. 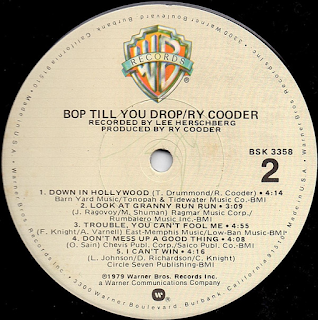 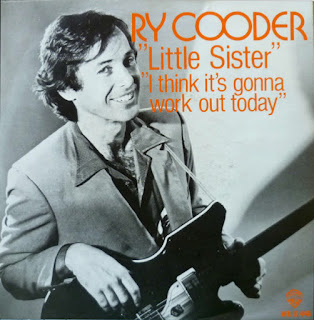 Down In Hollywood is an infectiously funky number with a sort of Dr. John/New Orleans groove to it. It slowly swings along most attractively with a gritty edge to it. It features a Stevie Wonder Living For The City spoken bit too and backing vocals that remind me of something else that I can’t put my finger on. It was the album’s only Cooder original composition.
Look At Granny Run Run is a catchy slice of upbeat country blues, once again featuring some fine backing vocals. These vocals are provided by none other than Chaka Khan, by the way.

Trouble, You Can’t Fool Me is soulful country blues at its best, full of Band-influenced vibes. Great guitar picking solo in there too. Don’t Mess Up A Good Thing has Chaka Khan duetting with Cooder on a Fontella Bass number enhanced by some more killer slide guitar.
I Can’t Win is a heartfelt piece of slow gospel soul to end this short, but eminently appealing album. Ry Cooder, similar to Boz Scaggs and Robbie Robertson, is someone I feel I should give more time to. One of those respected artists that has people nodding their heads and saying “good call” if you mention them. 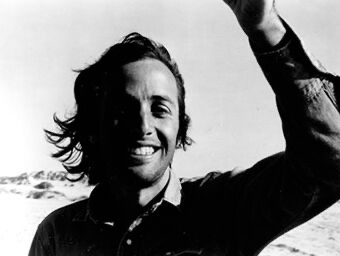 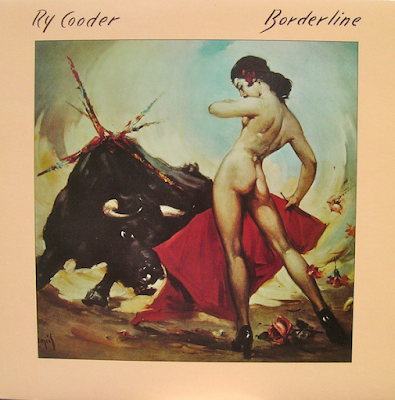 This album, from 1980, was also released while new wave was the main sound around, but it remained oblivious to that in its country-influenced Latin vibes and slow rock 'n' roll/ soulful r 'n' b debts. It is fine little album that has slipped underneath many people's radars.

634-5789 is a lively, jaunty cover of the Wilson Pickett song, driven along by some groovy organ and a soulful vocal from Cooder. It has some quirky, appealing instrumental breaks in the middle, too.
Speedo is a reggae-infused bluesy workout with a gruff Cooder vocal and call-and-response backing vocals. It features a nice, Latin-ish guitar solo too.

Why Don't You Try Me is a delightful track - an uplifting gospelly soulful ballad with a killer, vibrant chorus. I love it, and did so way back then too. It is overflowing with great instrumentation and top notch vocals, with Cooder giving it the big, deep voice soul growler at one point. When Cooder raises his voice skywards in the final verse/chorus the effect is spine-tingling.
Down In The Boondocks is a cover of a Billy Joe Royal-Joe South-penned song and Cooder gives his it his trademark laid-back Americana/soul veneer. 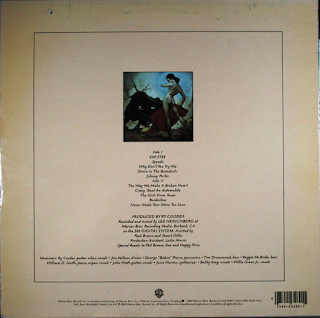 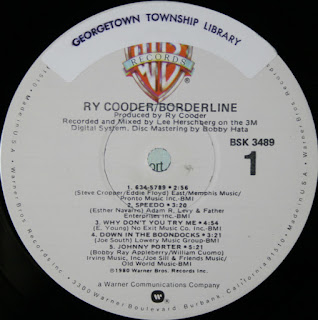 Johnny Porter is a brooding, deep, bassy piece of swampy blues with a Polk Salad Annie Tony Joe White/Elvis feel to it. The guitar picking solo near the end is superb. Cooder has always liked a Delbert McClinton-style Latin Border country song and we get a great one here in the romantic The Way We Make A Broken Heart. It is actually a John Hiatt song.
Crazy 'Bout An Automobile (Every Woman I Know) is a Stax-style r 'n' b number with one of those spoken intros before it breaks into its shuffling, addictive blues groove. Southside Johnny no doubt loved this.

The Girls From Texas is a pure singalong country stomper, Borderline is another John Hiatt number, this time a catchy instrumental and Never Make Your Move Too Soon is a Dr. John-influenced piece of New Orleans-style blues rock. As I said at the start, this is a pleasurable album, up there with (and possibly ahead of) Bop Till You Drop. 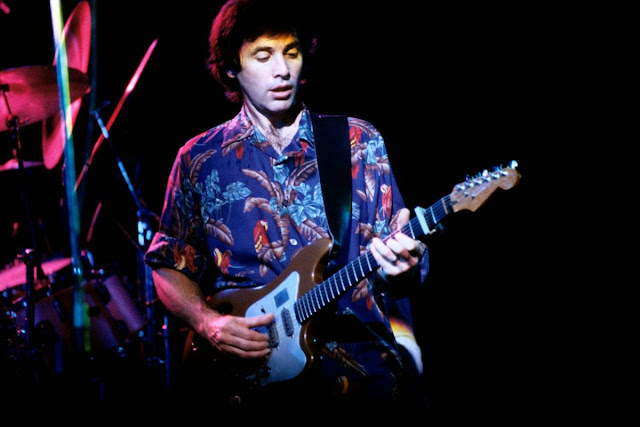 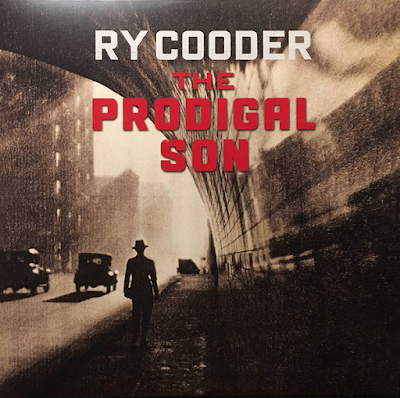 Veteran Ry Cooder joined forces with his son Joachim on this impressive 2018 journey back into his blues, r 'n' b, gospel and soul roots. Most instruments are played by Cooder himself. It tails off a bit towards the end, but there is still some quality stuff on here.

Straight Street starts slowly, with just a bluesy sounding strummed guitar before Cooder’s gruff, soulful, sleepy voice arrives and then the drums and a lovely warm, deep bass too and we are into a perfect piece of Americana. The song has an uplifting, gently gospelly chorus that is full of melodic soul. Indeed, the song was a 1950s gospel hit for The Pilgrim Travelers. Cooder gives it an effortless dignity. Great stuff. It is a great introduction to the album and is probably its best track.

Shrinking Man is a solid bluesy jug band-ish stomper that features some Chris Rea-style slide guitar runs. Gentrification is a staccato, rhythmic blurs with big hints of world music, particularly West African griot-style, all over it.
Everybody Ought To Treat A Stranger Right is a Blind Willie Johnson blues that is given a solid, slide-driven rocky makeover here.
The Prodigal Son is a traditional blues that rocks with huge, bassy muscle and is powered along by searing guitar and tub-thumping drums. So much of this album reminds me of some of Chris Rea’s Blue Guitars work, especially the first few CDs of that set. 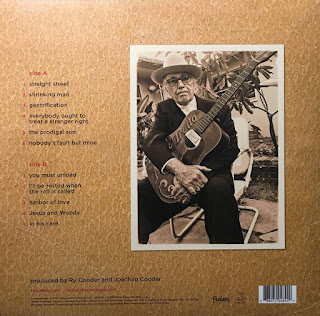 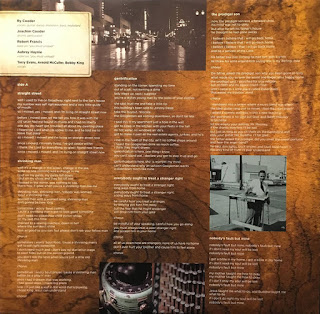 Nobody’s Fault But Mine is the Blind Wille Johnson song previously recorded by Led Zeppelin. Here it is done in a mysterious, grainy, authentic and mournful blues style.
You Must Unload is adapted from an old hymn and take to task the greedy, the selfish, immoral, hypocritical and the decadent. Played out against an almost Irish-sounding air it is a marvellous song with a fine message. The fools who currently run a lot of the world would do well to heed this.

I’ll Be Rested When The Roll Is Called is a rousing piece of country blues. Bruce Springsteen in Seeger Sessions mode would love this, I’m sure.
Harbor Of Love has a gentle, almost folky feel to it in its acoustic strains. Bob Dylan would love this one too, I feel. It features some lovely guitar.
Jesus And Woody is a Cooder original that has Jesus requesting that Woody Guthrie sing to him as they were both “dreamers”. In His Care is a gospelly stomp to end on. This is a genuine, authentic slice of Americana of an album, delving deep into the history of the blues. Yes it is retrospective, but gloriously so. 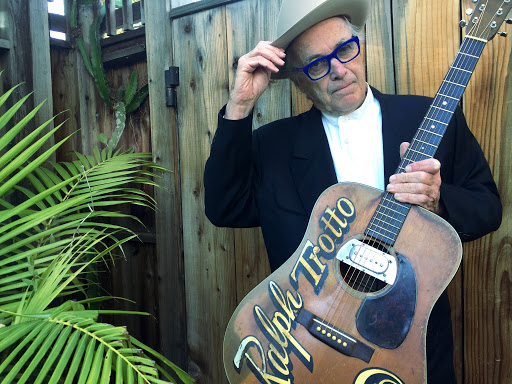