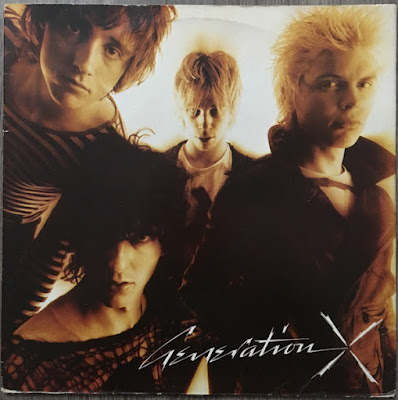 From The Heart/One Hundred Punks/Listen/Ready Steady Go/Kleenex/Promises Promises/Day By Day/The Invisible Man/Kiss Me Deadly/Too Personal/Youth Youth Youth
There were punks from the top drawer (we know who those were), there were those slightly from the next drawer down like Stiff Little Fingers then there were those from the third drawer like Generation X. I was never into them at the time and I still keep that stance, to an extent, although as you will see I am warming to this album. I viewed them as uninspiring “plastic” punks whose Buzzcocks riffs, standard punk drumming and contrived sneering vocals from bleached blond Billy Idol were nothing more than ordinary. Guitarist Bob Andrews could play though and his soloing gives the album something extra, I have to say. This album, their first, from March 1978, certainly makes no “punk best of” lists, for me, but revisiting it has been surprisingly enjoyable. It is loud, riffy, tinny and exciting. It is no The Clash, The Ramones, In The City or even Inflammable Material, but it is ok. Of its time, of course.

From The Heart is a rousing, punk-by-numbers opener with a couple of good guitar bits and One Hundred Punks has an in-your-face anthemic, fist-pumping vibe to it. Bob Andrews contributes another searing guitar solo. Musically, it is pretty straightforward, however, although there is a lively inventiveness to Listen on occasions. It is quite Buzzcocks influenced. 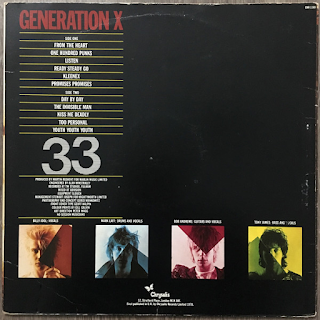 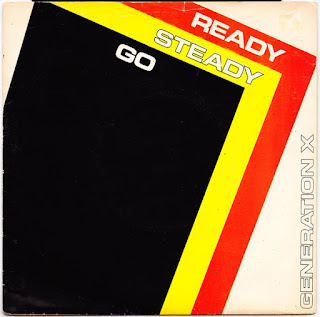 Ready Steady Go was a minor hit single and it brings back memories for me of 1978. It is a catchy tribute to the iconic sixties music show but it always irritated me a bit - where Billy Idol sings “Cathy McGow-ow-ow-ow-an...”.
Kleenex is a bit of a silly typical punker. Promises Promises is not the Buzzcocks song, it is an extended attempt at a punk anthem, sort of Still Little Fingers and The Ruts meeting The Boomtown Rats. Actually, it’s quite good. Probably the best track on the album.

Day By Day is a frantic thrash that tells of going round and round on the Circle Line. The Invisible Man, all stabbing riffs and rolling punk drums is a bit like those songs Bruce Foxton wrote for The Jam, lyrically.
Kiss Me Deadly tries to be a punk ballad with its pre-Billy Bragg guitar and Who-esque dramatic drum breaks. It features possibly Idol’s best vocal.

Too Personal is a solid slice of punk while the final number, Youth Youth Youth, is another attempt at a lengthy classic. It lumbers on a bit too long but it certainly has enough attack in it too retain one’s interest and the guitar solo is positively incendiary. Nice feedback drenched ending too.

I may have been a bit unfair on this one. I didn’t go for it in 1978 but feel more positively about it now. It is a surprisingly good album and a worthy debut.

** The bonus track single Your Generation is a pounding, thumping killer of a track with a coal mine deep bass line throbbing along throughout.
Its b side was the equally bumptious, stomping, glammy Wild Youth. Both are good ones. Wild Dub is great too, with some excellent bass and drums. A bit Clash-like in places.

No No No is a frenetic Ramones meets early Stiff Little Fingers thrash. Trying For Kicks is a Buzzcocks-fashion grinder. This Heat is very early Boomtown Rats in its feel. All these tracks would have been fine on the album. 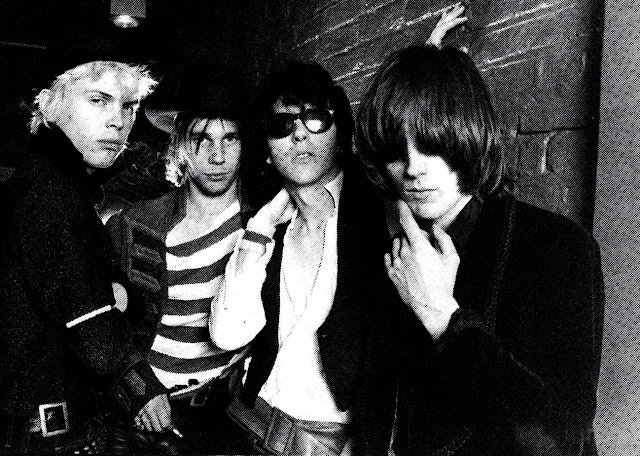 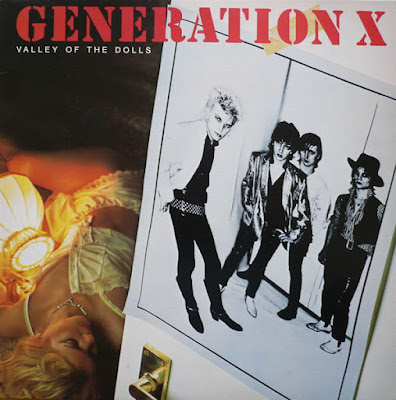 Running With The Boss Sound/Night Of The Cadillacs/Paradise West/Friday's Angels/King Rocker/Valley Of The Dolls/English Dream/Love Like Fire/The Prime Of Kenny Silvers, Pt.1/The Prime Of Kenny Silvers, Pt. 2/Gimme Some Truth/Shakin' All Over
In January 1979, Generation X tried to shake off their punk beginnings and show that they were proper, credible rockers. They employed ex-Mott the Hoople legend Ian Hunter to produce this, their second. While punks like them were using an old rocker like Hunter to produce their album, Hunter used Mick Jones of The Clash to help produce his latest album a few years later. Punks wanted to be rockers, rockers wanted to be punks. A strange time was 1979-80.

The album didn't really work or attract sales and Generation X split in November 1979. To be honest it is a very strange creation, not fitting in with any genre, difficult to categorise.

Running With The Boss Sound starts with a Mott The Hoople-sounding glammy anthemic guitar blast before it settles into a mid-pace new wave rock grind, similar to The Boomtown Rats or some of Ian Hunter's solo material. Billy Idol sounds quite Geldof-like on this. There are vague influences of Bruce Springsteen's 1977-78 output too. Funnily enough it would have fitted quite well on The River or the Tracks box set. Maybe "the boss sound" was not a coincidence.

Night Of The Cadillacs was like a typical Mott The Hoople mish-mash, like Violence or Crash Street Kids, just not as good. It was a bit like the stuff ex-Mott The Hoople bassist Overend Watts wrote when Hunter left and the band became Mott.
Paradise West is an attempt to be a Springsteen meets The Boomtown Rats street anthem but it never really gets there, despite some grandiose guitar parts. Its five minutes plus don't realise any potential it may have had. Yes, it has a few good points (a great guitar solo, for one) but probably more unconvincing ones. A few listens, though, and it does sound better, so there you go.
Friday's Angels sounds like an Ian Hunter bonus unreleased track that didn't make it on to an album. 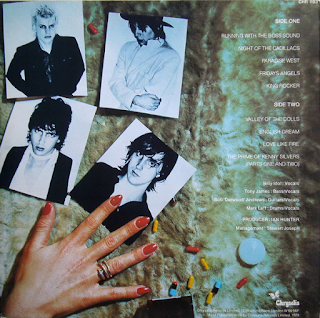 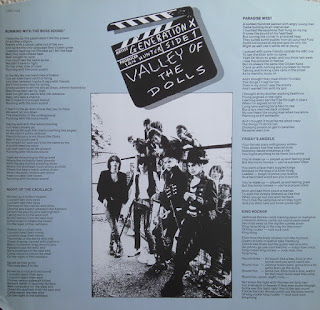 Next up were two singles, the moderately successful but annoying (to me, anyway) rock 'n' roll pastiche of King Rocker and the chugging sub-Clash meets Rebel Rebel rock of Valley Of The Dolls. I didn't really go for either of these at the time and they still sound decidedly ordinary.
English Dream is ok, but once again in a very Ian Hunter/Boomtown Rats sort of way. It is probably one of the album's better cuts, however.

Love Like Fire is clunky, uninspiring sub-heavy rock. While one-time punk bands like The Clash and The Jam moved on successfully with albums like Give 'Em Enough Rope, London Calling, All Mod Cons and Setting Sons and even lesser punks like Stiff Little Fingers released Nobody's Heroes and Go For It! material like this ensured that Generation X would not do the same thing.

The Prime Of Kenny Silvers, Pt. 1 finds the band trying to be The Who or The Jam in a character-driven song mixed with the street-drama of Bruce Springsteen or Bob Geldof. Pt. 1 merges seamlessly into Pt. 2 and the tempo drops a little. Look, it is ok, but as with most of the album it just sound right, whereas Rat Trap did. This was no Jungleland or anything off Quadrophenia or Down In The Tube Station At Midnight. It was a bit of a shame, because its intentions are fine,  but some songs make it and some don't.

John Lennon's Gimme Some Truth is given a speeded-up punk makeover in which, ironically, Idol condemns punk rockers. Again, you could see what was trying to be achieved here and once more, it didn't quite work. It ends up like Sham 69 with chanted "truth" shouts.
Another cover ends the album - Johnny Kidd & The Pirates' Shakin' All Over, something Ian Hunter regularly covered live, much more convincingly. So it was farewell, then to Generation X, probably rightly. Billy Idol went on to have a few solo hits, notably White Wedding and Rebel Yell in the mid-eighties. 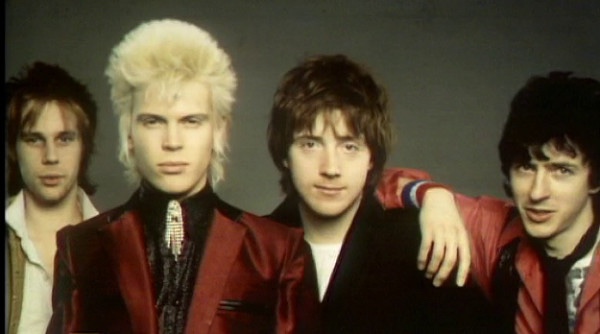