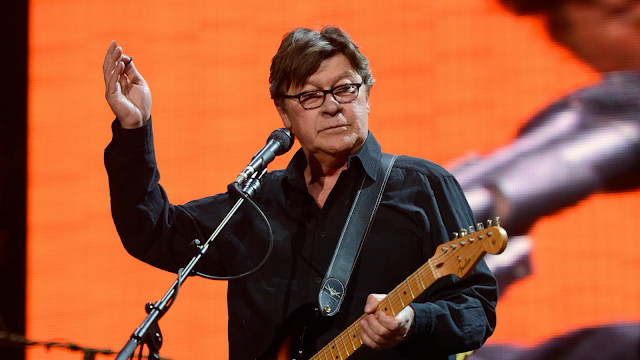 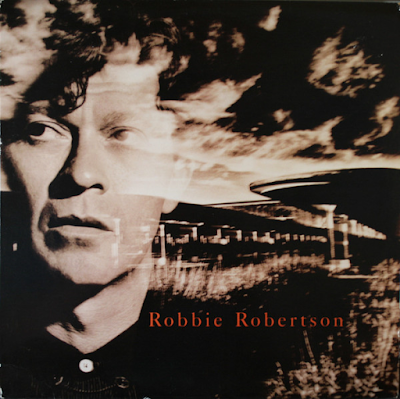 Robbie Robertson had waited eleven years until 1987 from the breakup of The Band before releasing his first solo album. I guess it was worth the wait, because this is a really good, atmospheric album. Robertson doesn’t have a particularly outstanding voice, but he has a characterful, gruff one that perfectly suits the slow, soulful rock of the album. There is certainly no Band-like country rock or references to the Civil War on here - it is bluesy rock all the way, Robertson was definitely making a statement that he wanted to change style.

Fallen Angel starts slowly, with some vaguely Native American-sounding drums and keyboards getting louder and louder before the song breaks out into an infectious Sting-like rhythmic backing and Robertson’s gruff but soulful vocal arrives. The bit where Robertson sings “come down Gabriel blow your horn..some day we will meet again...” is very moving and then the song is taken higher by its backing vocals. “If you’re up there, can you reach me and lay a flower in the snow..” is also beautifully emotional. 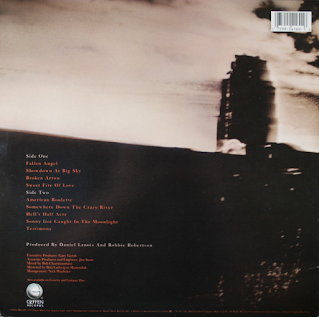 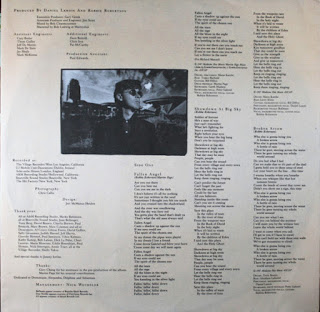 Showdown At Big Sky is a funky-ish rocker featuring some fine guitar breaks and Talking Heads-like harmony vocals on the chorus. You can hear the influence of producer Daniel Lanois on this one. Broken Arrow was covered effectively on Rod Stewart’s 1991 Vagabond Heart album, and Robertson’s original is slightly slower and more sombre in its delivery, but no less evocative.

Sweet Fire Of Love is introduced by the unmistakable guitar sound of U2’s The Edge and Bono and Robertson share vocals on what is a typical Joshua Tree-era U2 muscular rocker.  American Roulette is a riffy, upbeat rocker too while Somewhere Down The Crazy River is a slow paced, infectious vocally growling number.

Hell’s Half Acre is a magnificently riff-loaded grinder with cutting guitar all over the place and a solid vocal. It reminds me of Little Steven. Sonny Got Caught In The Moonlight is a subtly captivating sort of Dire Straits-esque number. It also carries hints of slow Thin Lizzy, for me anyway. The album ends with the brassy, once again Little Steven-influenced Testimony. It was a fine thumper of a track.

This was a fine album and has slipped under the critical radar somewhat. 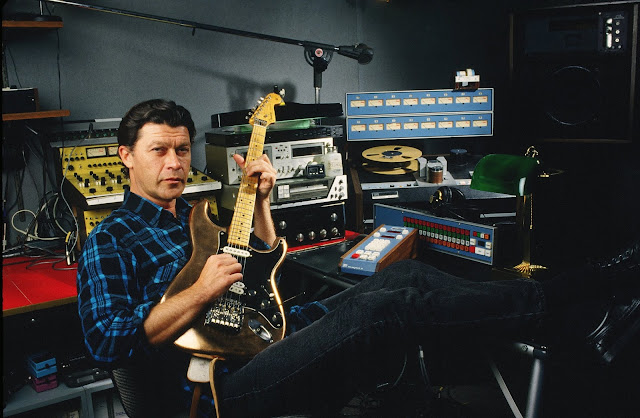 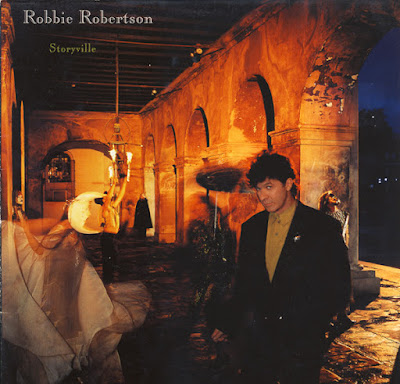 This was Robbie Robertson's second solo album, dating from 1991, and it thankfully avoids the synthseised backing that blighted a lot of albums in the late eighties/early nineties. It is solid, strong but understated rock album - it has that AOR, mature rock vibe that became popular in the nineties as many seventies rock artists aged and became more reflective. Lots of fine guitar, deep bass, "proper drums" and swirling organ backing a beautifully low, growling voice. All the tracks are around the five minute mark in length, so it is quite a long album. Quite a lot of it is of a similar quiet sound and slow pace, which I like, but I preferred the variety of Robertson's debut album. This is a very sleepy album.

Night Parade is a mid-pace, appealing subtle rocker with some equally subtle brass backing Robertson's attractively laid-back vocals. The vocal is sort of Don Henley-esque and it is one of the album's more powerful numbers. Hold Back The Dawn is a captivating but low-key number with vague echoes of Bob Dylan's material on Oh Mercy. It has a lovely ambience to it - the musicianship is top notch (check out the bass line) and Robertson's vocal showing itself to be quite versatile. 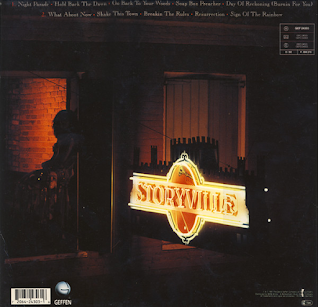 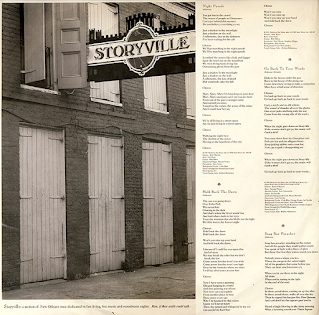 The infectious, enjoyable rock of Go Back To Your Woods has an insistent riffy backing that sounds as if it comes from a Keith Richards solo album. It is the only track less than five minutes long, and only by ten seconds -these are all developed songs. Incidentally, this one was co-written with Bruce Hornsby. Soap Box Preacher reminds me of Ricky Ross and Deacon Blue both in the vocal delivery and the song's feel. I'm pretty sure Ross will have been influenced by this. It sounds just like some of his subsequent work.

Day Of Reckoning (Burnin' For You) is a low-key, latter-era Dire Straits-ish number with hints of Sting in there too. What About Now has a gentle guitar sound a bit like U2 used on Bad ands another impressive but laid-back vocal from Robertson. The chorus is again Deacon Blue-esque with bits of Don Henley in there as well. The tempo increases slightly in the catchy radio-friendly drive-time rock of Shake This Town. I really like this one - great brassy, uplifting chorus.

Breakin' The Rules is a slow burning, evocative number. Resurrection has a great feel to it - gruff but attractive vocals and smooth, melodious backing. I am sorry to keep saying Deacon Blue, but it is so there for me - in the rising tones of the music and in Robertson's vocals. Sign Of The Rainbow ends the album in unsurprisingly somnolent fashion. A nice album but overall I prefer its predecessor, slightly. 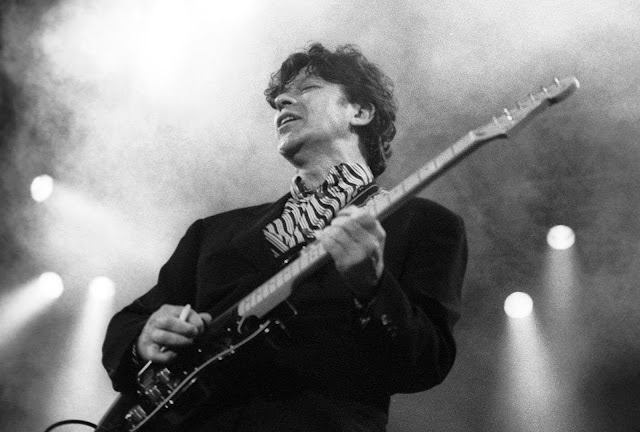 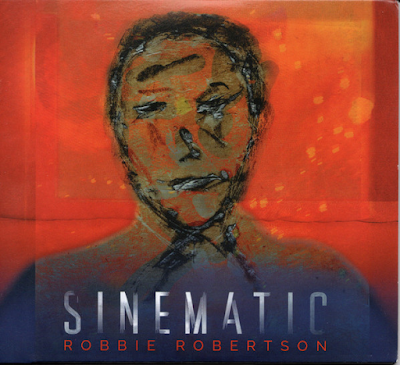 This is an admirable 2019 album from ex-Band member and now rock royalty figure, Robbie Robertson.

I Hear You Paint Houses, written for a mobster film called The Irishman, is a magnificently rumbling, atmospheric duet with Van Morrison, with Robertson’s voice sounding old and gruff, while Morrison’s is well, Morrison. The song’s rhythm is beautifully insistent, warm and bassy. The title, gruesomely, refers to blood-spattered walls after the carrying out of a killing. The album is all about cinematic atmosphere, as the title suggests, and this is continued on the moving strains of Once Were Brothers which is sort of Tom Waits meets Mark Knopfler. There are echoes of Sting in it too. Robertson’s vocal is superbly evocative, yearning and sad and, together with a fine harmonica, makes for a great song. It was written with The Band in mind. Three of them are no longer with us. Its Civil War references hark back to The Band's late sixties/early seventies material.

Dead End Kid is muscular and shuffling, again full of feeling. It really sounds like something else but I can’t put my finger on it. It features some excellent lead guitar. There is something Jagger-esque about it. Hardwired is tough, menacing stuff, lovely and late night bassy with Robertson spitting out his vocals like an old cynical snake. This is gnarled music made by gnarled old experienced professionals who have all been there and done it. The whole album has that sort of feeling.

Walk In Beauty Way is a beautiful, contemporary-sounding duet with a female vocalist whose identity I am not sure of (Laura Satterfield I am told). The Chris Rea-ish Let Love Reign is once more superb, packed full of bluesy soul feeling. You can’t analyse this too much other than it just has a cool, effortless vibe to it that is irresistible. It reminds me of Joe Bonamassa in places. Shanghai Blues is a creeping, unnerving blues about a gangster that brings to mind Nick Cave’s Red Right Hand. Wandering Souls is a deliciously beguiling, bassy instrumental. It is really quite lovely in places, particular on Robertson's guitar parts. The seedy, urban rainy night streets atmosphere is back on the glorious, again Rea-esque Street Serenade.

The Shadow continues in the same vein and tells of Robertson’s memories of listening to the radio in the days before TV (very Morrison-esque). Orson Welles played The Shadow. Beautiful Madness is another semi-spoken gruff number that has hints of U2 in it, for me. Praying For Rain is a tough piece of bluesy mid-pace rock with environmentally-concerned lyrics while Remembrance is a moving instrumental ending to a fine, well-crafted, honest and inspiring album. 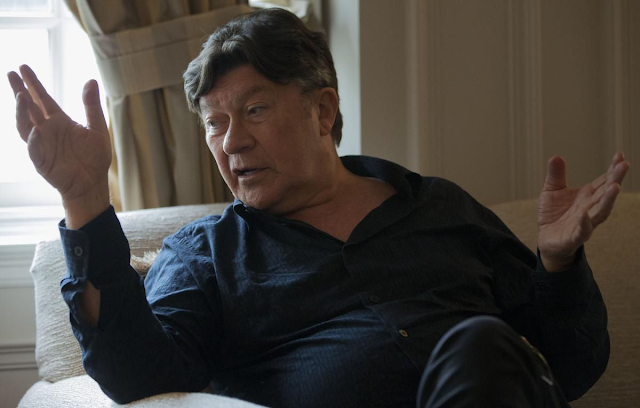