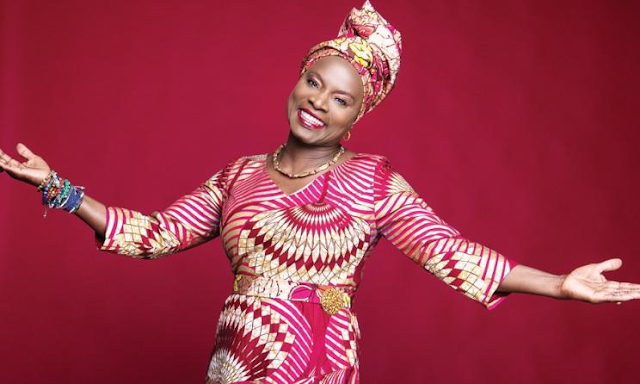 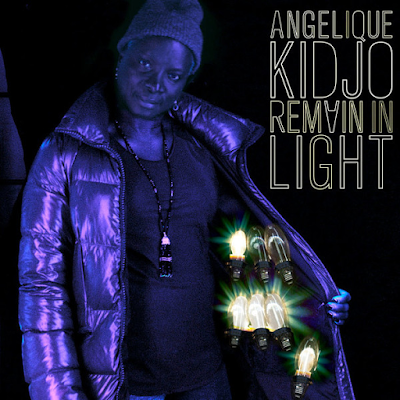 Born Under Punches/Crosseyed And Painless/The Great Curve/Once In A Lifetime/Houses In Motion/Seen And Not Seen/Listening Wind/The Overload
As someone who bought Talking Heads' Remain In Light upon release in 1980 and is virtually familiar with every note, this is certainly a most interesting release (I have reviewed the original album in detail on the Talking Heads page). Here, Benin artist Angélique Kidjo covers the entire album from an African perspective, which highlights the very West African, Afrobeat rhythms that inspired David Byrne and the band in the first place. The whole album is intoxicatingly rhythmic, with Hi-life, Afrobeat sounds pulsating throughout from beginning to end. Legendary Fela Kuti drummer Tony Allen is one of many musicians to contribute to a huge, punchy, horn and percussion-powered non-stop groove and Kidjo's vocals are euphorically rousing. She never lets the huge backing get the better of her. It is a wonderful piece of Afro/rock fusion that takes a classic album and respectfully enhances it. Kidjo has said that she remembers listening to the original album and immediately recognising aspects of her native music within, at a time when not too much Western rock/new wave music contained such clear "world music" influences. What she and her team have done is recognise all those West African influences, kept them there and built on them, considerably. This is not like an orchestra re-working a rock album, unconvincingly, it is West African musicians taking a Western album that was considerably influenced by their own indigenous music and creating something very special, using that very music. It doesn't sound remotely forced, anything but. It is a joy. Be prepared, though, the sound is thumpingly loud and you need to lower the sound on your system to appreciate it at its best.

One track that doesn't quite come off for me, however, is Once In A Lifetime. The album's most commercial track and my least favourite doesn't quite get there, sounding a bit too fussy and cluttered. Also, the thing that gave the song a lot of is appeal was David Byrne's vocal, paranoid quirkiness. Kidjo has none of that in her delivery. That is splitting hairs a little, however, as it is still eminently listenable, more for its music than its lyrics, whereas the original was the other way around.

The beguiling Houses In Motion is given a staccato, bassy and different makeover, featuring some ethnic language parts (Yoruba?). This one works well, with a completely infectious rhythm/beat. Listen to those authentic West African horns too.
The lyrically mysterious, spoken Seen And Not Seen is given a vibrant, thumping new life by Kidjo. The David Byrne spoken bits, perplexing as they are, now sound hauntingly voodoo-esque in Kidjo's hands. The album's cover has echoes of that too. The end of the song breaks out into an uplifting glorious piece of choral majesty.
The same can be said of Listening Wind. As on all of the tracks, all the vocal call-and-response is there, but emphasised even more. The vocals are truly amazing throughout, check out the bass and addictive percussion on here too. These three tracks are all really impressive.

The sombre, always incongruous post-punk gloom of The Overload is another that doesn't quite come off, though. It has no need for Kidjo's rousing vocals. Still, six out of eight corkers ain't half bad.

This had the potential to be a disaster, attempting to cover such an iconic, unique album like this, but it is the very opposite. It is a refreshing triumph. It is possible for both albums to co-exist, bouncing off each other but they can also flourish separately and that says it all. 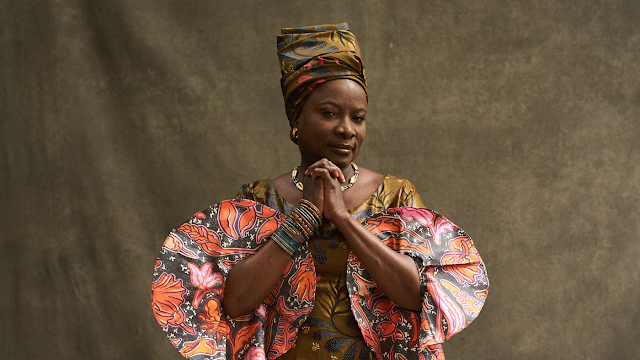 Check out the original Talking Heads album here (click on the image) :-
Email ThisBlogThis!Share to TwitterShare to FacebookShare to Pinterest