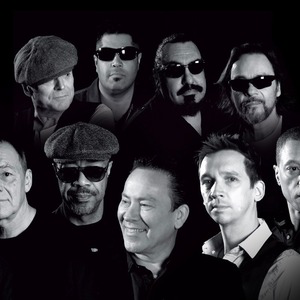 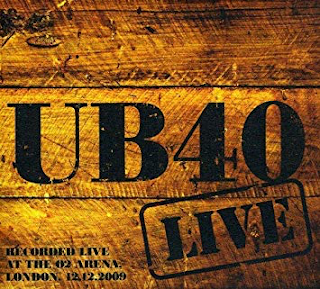 This is an excellent and most enjoyable live album from UB40 in their UB40 Mk. II incarnation, without Ali Campbell, Astro and Mickey Virtue and featuring "the other Campbell brother", Duncan on vocals, sounding a lot like Ali. I have seen this version of the band live on a couple of occasions and both times they were truly outstanding.

A lot of the material is derived from the group's four Labour Of Love albums, seventeen of the album's twenty-four tracks, in fact. The tour was The Labour Of Love Tour, so it was based around those albums. The track listing shows what the set list included. All the songs are performed enthusiastically and to a high standard.

The sound quality is pretty good. Not quite one hundred per cent, but certainly good enough to enjoy. Sort of. I have to admit there is a certain amount of muffled-ness to it. As I said, though, it is still listenable and it has a good live vibe. A similar album called Live In Birmingham, presumably from the same tour, also exists, featuring exactly the same set list. 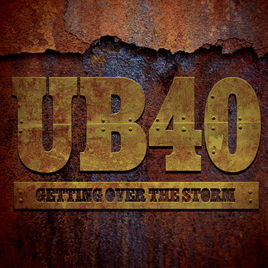 “The voice of UB40”, Ali Campbell, leaves in a fit of sibling rivalry pique, gets replaced by elder brother Duncan, who was never in the group for all those success-filled years and guess what? The band release a country and western reggae album! That will go down well. Cue the predictable chorus of criticism.

This is a very pleasant album to listen to. The laid back reggae groove suits the country songs perfectly - Getting Over The Storm, Blue Eyes Crying In The Rain, Midnight Rider, I Did What I Did, He’ll Have To Go are highlights.

If You Ever Have Forever and How Can A Poor Man Stand Such Times And Live are personal favourites. 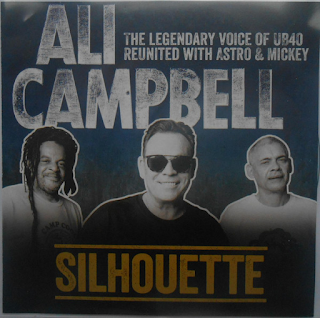 This is the first album from singer/songwriter Ali Campbell's breakaway triumvirate from UB40, including toaster Astro and keyboardist Mickey Virtue. As a long time UB40 fan since 1980, unlike some, I don't take sides. I enjoy the music made by both UB40 incarnations. Good music is good music, after all.

Anytime At All is a staccato, appealing enough tune, but Campbell's voice sounds a bit deadpan on the song. I was listening to it and thought, this sounds like The Beatles. Of course it does, they recorded it on A Hard Day's Night. Silhouette is more recognisable as Ali Campbell and has a nice, deep bass backing. Old mate Astro adds some quality toasting near the end. This is a good track. Apparently it was a cover of a 1957 US doo-wop hit by The Rays. No, me neither. Cyber Bully Boys is a brassy and dubby condemnation of Campbell's ex-band members, which I find churlish and unnecessary, but it is a good skank, as indeed is the very UB40 Reggae Music, featuring Astro once more. Nice dub passage at the end too. 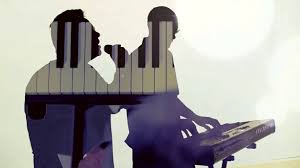 I'm Missing You is an appealing Campbell love song with his voice sounding more nasally recognisable. Who Will Remember Them a deep but melodic bass and an atmosphere to it. Fijian Sunset is another yearning, typically Campbell track. I'm not sure if Sha La La is a cover, but it has a very nineties lovers rock sound to it. Tomorrow On My Shoulders is also a fetching song with a vague country feel. Odd that, as the rival UB40 released a country reggae album around the same time.

Our Love has a retro reggae sound to it, sort of eighties digital in its feel. It has some nice percussion and an all round good vibe to it. History is catchy enough, but lyrically a bit clichéd - "history remains a mystery...". I Want You - yes it is the Bob Dylan number and it really suits Campbell's mournful voice. he does a great job on this, giving it real pathos. The horns fit the track too. The album finishes with the laid-back, summery groove of Yes, I'm Ready. It is a cover of a Chi-Lites song. Once again, Campbell really does it justice. He always could nail a cover. 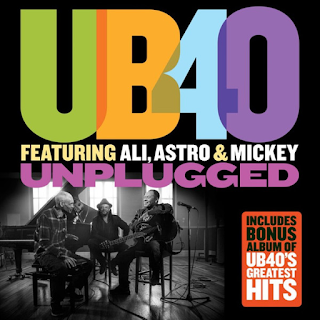 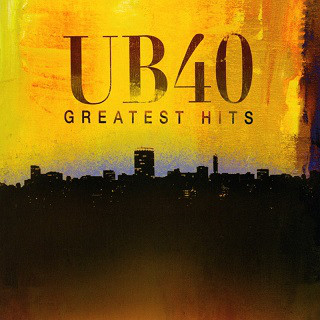 This album is a double mix of firstly, “unplugged” versions of UB40 classics performed by singer Ali Campbell’s breakaway triumvirate of toaster Astro and keyboardist Mickey Virtue. (Virtue has subsequently left) and a second CD of the original group’s greatest hits. Funnily enough, despite Campbell’s acrimonious split from some of the other original members of the group (who now carry on also claiming to be UB40) he seemingly has no qualms about pairing these new unplugged versions with the work of the original group. 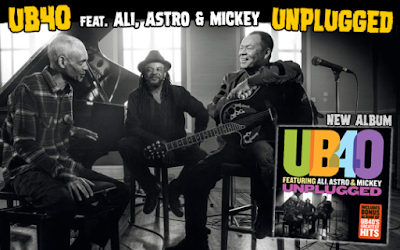 Anyway, enough of all that nonsense. On to the music. We all know the greatest hits, so it is the “unplugged” material that is of interest. It is certainly not all unplugged i.e. stripped back and acoustic. Many of the tracks have a beat to them and a reasonably full instrumentation. While it is always a bit strange listening to new versions of songs you have become so familiar with over the years, there is, for me, always an interest in seeing what they have made of them. There are certainly some intriguing interpretations on offer here. A quirky, Eastern-sounding One In Ten, an acoustic Food For Thought and a cover of Prince’s Purple Rain for starters. Tyler gets a good makeover too and Baby Come Back features some classic Booker T-style organ.

Most of the tracks are tinkered with quite a bit, enough to justify their new existences. A bit of new percussion here and there, a new bass line, some new backing vocals, a riff played on acoustic guitar instead of saxophone, a more rhythmic drum backing. We get all of that and the new versions are worth listening to for that. The sound quality is good - full and bassy and it is nice to hear Ali’s unique, iconic voice again. For many, he is UB40. It is such a shame what has happened.

The new track That's Supposed To Hurt is a good one, and quite appropriate really. 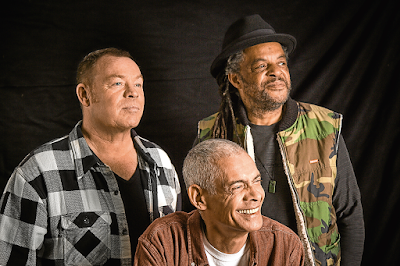 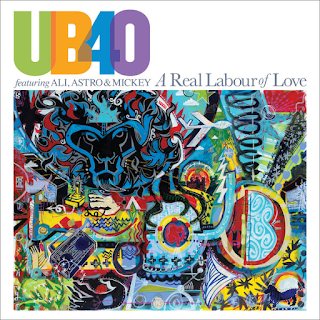 It is so sad that UB40, after all those years recording and touring together and producing so many great albums, have ended up splintered, as two separate groups, five of them in one group, three in the other - this one. As a fan, I have stuck with both of them. To be honest though, Ali Campbell is the real voice of the band, despite brother Duncan doing a more than acceptable job in the "other UB40". I have seen that version of the band, with saxophonist Brian Travers and Robin Campbell in it, live a couple of times and they're excellent.

Anyway, back to this album. Despite the criticism from many other reviewers, I find it a perfectly enjoyable listen. Nothing spectacular and certainly not covering the copper-bottomed reggae classics that the first three Labour Of Love's did. Volume Four not quite so much. Apparently these were not the 70s reggae songs they grew up listening to as covered on those albums, but stuff they listened to on the road while touring.

Stevie Wonder’s A Place In The Sun is obviously not a reggae original, and there are a couple of songs from the late 70s in Dennis Brown’s sublime How Could I Leave and Culture’s International Herb. The early 70s stuff that so dominated certainly the first two Labour Of Love's has gone, though. However, most of the tracks on A Real Labour Of Love are from the 80s, a decade that saw dancehall reggae enter the mainstream. Gregory Isaacs' Hush Darling and Once Ago are welcome inclusions. Hard Times is a favourite of mine and Moving Away has a nice dub-style backing. I also love In The Rain, which has a great laid back feel to it.

Ali's voice sounds a little older, maybe, but I don't accept any of the criticisms of the musicianship on this album. 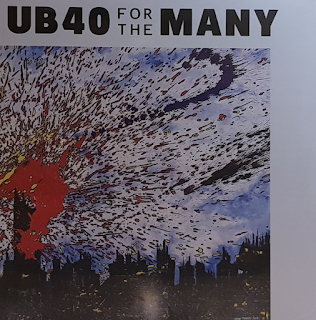 Having enjoyed UB40's music since 1980, I find the current situation which has two feuding incarnations of the same band very sad. I do not take sides, I listen to the output of both groups and enjoy them. This version of UB40 contains five members from the original band - Earl Falconer, Jimmy Brown, Robin Campbell, Brian Travers and Norman Lamont Hassan. Since Labour Of Love IV and the country/reggae album Getting Over The Storm, Duncan Campbell has been lead vocals and, as we know, he sounds a lot like original vocalist Ali Campbell. The latter is part of the other version of the group with toaster Astro and Mickey Virtue. Confusing, isn't it?

Anyway, this is a laid-back pleasant enough collection of catchy reggae numbers given that familiar UB40 brassy treatment. It has a nice, warm sound quality to it as well, with none of that too heavy bass that blighted late 1990s/early 2000s albums like Guns In The Ghetto. The bass is solid and full, as it should be, but not distorted.

The cover is a somewhat shocking impression of a city skyline based on the Grenfell Tower fire.

The Keeper is a breezy, brassy and summery typical UB40 groove, while Broken Man has a deeper, dubbier rhythm but retains the trademark horn backing. Additional vocalist Kabaka Pyramid has a toasting part near the end. Lead vocals are taken by Norman Lamont Hassan, who has a deeper voice than Campbell. Gravy Train is a Gregory Isaacs-inspired melodic skank, with a nice dubby bit at the song's conclusion. UB40 have always been a band with a social conscience and this is expressed in the cynical I'm Alright Jack. Its concerns are the unfairness of the property market. Pablo Rider provides the gruff, ragga-style toasting vocals. More authentic dub is featured on the
track too. 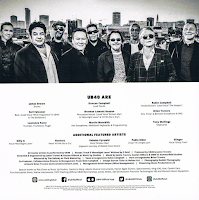 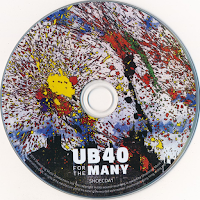 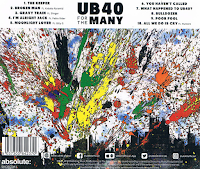 Midnight Lover has Hassan on vocals again on an infectious Lovers Rock-style number. You Haven't Called is a slow-pace, dubby love song. Great bass and saxophone on this. What Happened To UB40 is a disappointing, unnecessary toasting dig at the "other band". While it has a great groove  to it, its sentiments come across as churlish. No need for it. Once again, though, the dub sounds on the track are impressive.

Bulldozer goes full on ragga and Poor Fool is a return to that laid-back, sunny sound. All We Do Is Cry is an evocative, soulful number with Hassan again on vocals, at one point showing some Eastern influences. This album is notable for using Hassan quite a few times on vocals, so it doesn't come across like an attempt to sound like Ali Campbell, something Duncan is sometimes guilty of. This is an enjoyable forty-fifty minutes or so's listen. Recommended.