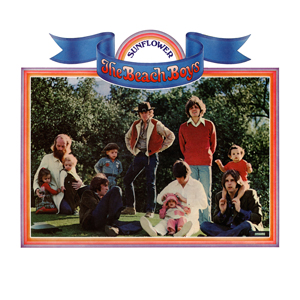 After an album that I enjoy a lot personally in Wild Honey, The Beach Boys continued rediscovering their mojo with this greatly underrated classic from 1970. You can stick your vegetables and wind chimes, this is an eminently preferable Beach Boys album. The harmonies in here are perfect, as is the backing. The songs are full and back to being perfectly constructed.

The instantly catchy This Whole World, the quirkily appealing Add Some Music To Your Day and the uplifting, thoroughly beautiful Forever are standouts. Got To Know The Woman is both powerful and harmonious and Deirdre is a throwback to their best early/mid sixties material.

It's About Time is a rocky number with some decidedly un-Beach Boys style percussion and a big rumbling bass line in the middle. Even a bit of rock guitar. I love this one. So different to pretty much anything they had done before. As indeed, is Tears In The Morning which somehow has echoes of John Lennon, I think, anyway. All I Wanna Do has a Beatles-ish drum sound too. Our Sweet Love is just beautiful. The songs on here are what Smile should have sounded like, in my opinion. They are considerably better than any of that drug-addled, half-baked drivel. Mind you, At My Window has uncomfortable echoes of those bad days though. Forgivable on this album. The same applies to Cool, Cool Water which has some intoxicating parts.

This is just a perfectly constructed, laid back, beautiful album. It is a mature, adult album. It rarely gets mentioned, like the equally underrated Holland. The remastered sound is very good too. Well worth a listen. 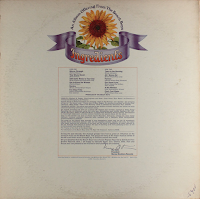 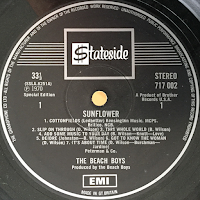 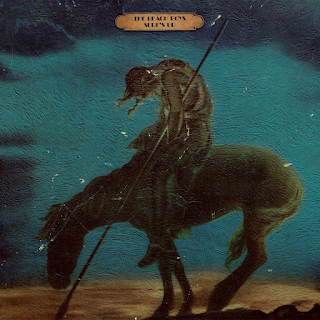 Surf's Up is regularly rated as one of The Beach Boys' classic albums. For me it is a strange one. It is certainly by far superior to the execrable Smiley Smile and since then there had been the quirky Wild Honey and three patchy offerings in Friends, 20/20 and Sunflower, so it stands out as being the group's best album for quite a while. Despite also possessing a fair amount of idiosyncrasies too, it definitely has some moments of brilliance. It is a sad album, though, giving a poignant notice that The Beach Boys in the seventies were a group in turmoil, a group long distanced from the carefree glory days of 1963-1967. Taking into account its role as a symbol of chronological transition it is an important and relevant album. It is a work of genius? No. Is it a beguiling, evocative and symbolic release? Undoubtedly.

Some of the material on the album had been knocking around for a while, but there is more of a cohesion present here, in comparison with Smiley Smile, far more. It works much better as an album. I still find it a somewhat disparate creation, though, full of different material from different writers all intent on doing their own thing. A bit like Let It Be it was a work from several different individuals by now masquerading as a "group". 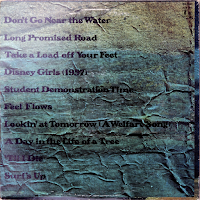 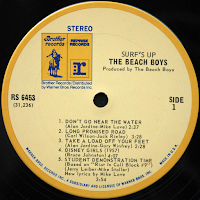 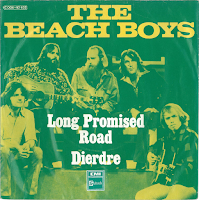 Don't Go Near The Water is the very antithesis to the "glory of sea, sand and surf" songs that so characterised the group's sixties output. Here the water had now become a polluted hazard to health that people needed to stay away from. It was a cynical, terribly sad way for the seventies to begin, but thought-provoking and highly moving too. It was an example of the group's efforts to write more socially-conscious material, possibly as a reaction to the contemporary zeitgeist, possibly at the behest of their latest manager, an ex-journalist called Jack Rieley. 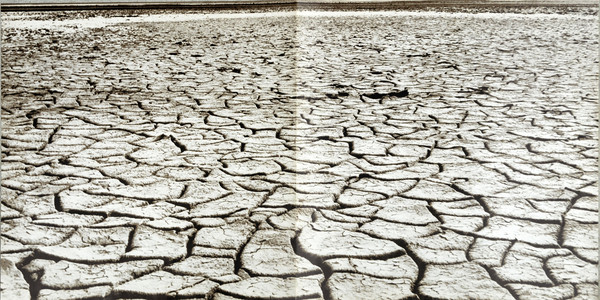 Long Promised Road is a harmonious, soulful piece of pop from Carl Wilson. It was similar to the stuff that he did for the Carl And The Passions album and it wouldn't have sounded out of place on 1973's Holland either. Take A Load Off Your Feet is melodious enough and vaguely appealing, but it is also a bit of a silly song, (about painful feet), of the sort of semi-nonsense that Brian Wilson had been coming up with since 1967. Despite its silliness, the vocals and backing are quirkily pleasurable.

Bruce Johnston's Disney Girls (1957) is, for me, by far the best track on the album - evocative, nostalgic and basically wonderful, musically, vocally and lyrically. Johnston's lead vocal is hauntingly beautiful. It rarely appears on "best of The Beach Boys" compilations. It should do.

Student Demonstration Time has a Revolution-style buzzy guitar riff before blasting into that Elvis brass riff rock 'n' roll thing, using Lieber and Stoller's Riot in Cell Block No 9 to provide the melody. The song tells of the social upheaval of several violent student, anti-war demonstrations of the time. It is a most un-Beach Boys number. Anarchic social comment and heavy guitar riffs? Surely not. I guess this is what makes this album unique. Carl Wilson's Feel Flows is a melodic, gentle number reminiscent of the material on Sunflower, while Looking' At Tomorrow (A Welfare Song) is a vaguely Beatles-esque short, hippyish acoustic number. The Beatles and psychedelic vibes continue with Brian Wilson's oddly moving A Day In The Life Of A Tree. 'Til I Die is also experimentally unusual, as indeed is the Sgt. Pepper-ish Surf's Up. Again, there is something very psychedelic about these final three tracks and for many people, it is these three that are the best tracks on the album. I can see where they're coming from, but me, I prefer the blatant sentimentality of Disney Girls.

For a comparatively short album of vastly differing songs, with several seemingly throwaway tracks,  it is is surprising how much can be be written about it. One could write far less about much better albums. 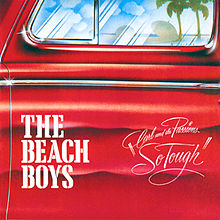 Carl Wilson was now leading the proceedings, as "musical director", and, with Brian Wilson's contributions becoming less frequent and more erratic he hired Blondie Chaplin and Ricky Fataar to join the line-up. The result was an experimental, in parts most enjoyable, but often overlooked album.

Elton John loves this underrated album from 1972 and it's not hard to understand why. You Need A Mess Of Help To Stand Alone has that upbeat, bluesy but driving rocky sound that Elton John loved throughout the 70s. Add to that some Beach boys harmony and you have something worth listening to.

Here She Comes has a truly thrilling bass, drums and jazzy Elton-style piano intro and a thumping jazz rock feel all through it. Vocalist Ricky Fataar’s voice is a bit weak though, to be honest. This track sounds an awful lot like The Band. He Come Down features many assorted Beach boys members on vocals (Carl, Mike Love, Al Jardine, as well as Blondie Chaplin) and the harmonies are predictably great in this, at times, gospelly rumination about religion, God and gurus and the like. 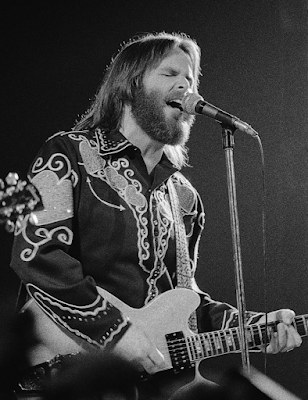 Marcella was probably the most “typical” Beach Boys track - summery, trademark harmonies, catchy hook, about a girl and so on. Just an uplifting song.

Hold On Dear Brother is a song that you could see would have appealed to Elton John - although it sounds like stuff he recorded himself in the two previous years, so who influenced who? Make It Good is a couple of minutes of vocal harmony "filler" that is a bit of a waste, but All This Is That is a wonderful return to quality. Beautiful ambience, marvellous vocals another great song of summer. It should deservedly be on any “best of” compilation.

Dennis Wilson’s vocal on the plaintive, somewhat over orchestrated Cuddle Up is an interesting end to the album. Something of an experimental track but certainly with its beautiful moments, especially the piano and strings, and when the harmonies come quietly in at the end it is quite spine tingling.

As with all Beach Boys' seventies and beyond product, it falls short when compared with a lot of their sixties work, but taken away from that context, it is not a bad album. 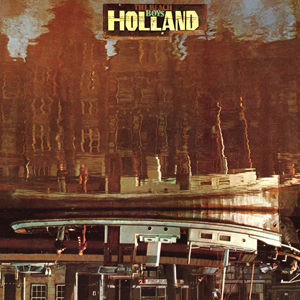 Recorded in The Netherlands in 1973, this is nowhere near as bad an album as history would sometimes have us believe. Somewhat laid back, it is a far more enjoyable listen than some of the drug-addled nonsense of the Smile sessions and the appalling indulgence heaped upon Smiley Smile. It is a most underrated album, in my opinion.

The lead off track, Sail On Sailor with vocals by new member and now sometime Rolling Stone Blondie Chaplin is a solid start as is the next track, the slightly funky Steamboat. The following California suite of three songs has its moments, particularly the last movement, which features the most “Beach Boys-y” bit - "have you ever been south of Monterey..?" Even the much-criticised middle spoken word part on The Beaks Of Eagles is quite evocative and atmospheric.

The Trader is possibly the standout track, with some great bass work on it and enjoyable changes i tempo and ambience. The vaguely Dylanesque Leaving This Town and Only With You are appealing too, good harmonies, feel and melody and the final track, Funky Pretty is excellent. The Beach Boys really do go funky. Who would have thought it when they were blathering on about vegetables.

The Beach Boys had not lost their direction here, despite recording problems in Holland which left a few tiny crackly bits in the sound here and there, they had just grown up a bit. This was the result. Give it a go with an open mind. Ten years on from Fun Fun Fun etc this is exactly the sort of album one would have expected/wanted from them. 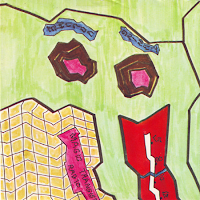 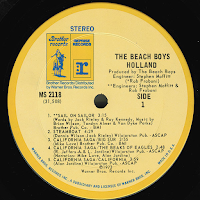 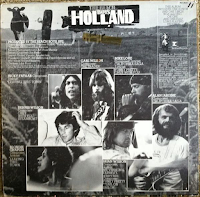 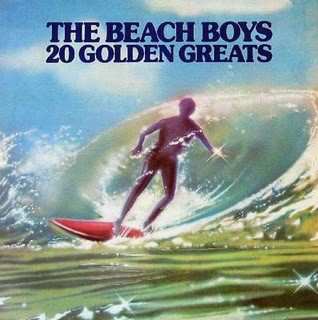 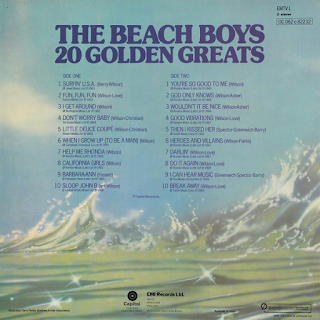 Despite the ground-breaking "genius" (as contemporaneously promoted) of Pet Sounds, the experimental Wild Honey and the laid back Sunflower and Holland, and ignoring the debacle that was/is Smiley Smile this is, for many, the best way to listen to The Beach Boys. 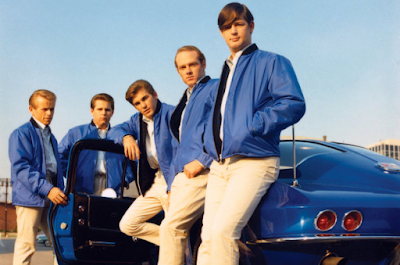 Hit after glorious hit. One after the other. On a sunny afternoon. It doesn't get much better.

Yes, they produced some undoubtedly wonderful albums, but in many ways the Beach Boys were a singles band. The "single" was so important in the 1960s and here they all are in all their "big wave" majesty.

Twenty greater hits it would be difficult to match.

With regard to the sound problems mentioned by reviewers of this album over various media -  a good thing to do, in this digital age, if you can, is use the newly remastered STEREO versions to make, in effect, a remastered edition of this classic "Greatest Hits" release. Or, if you prefer, make one with the MONO recordings.

Just put it on. A hour's worth of pure pleasure. It includes the often-overlooked and beautiful Break Away too.