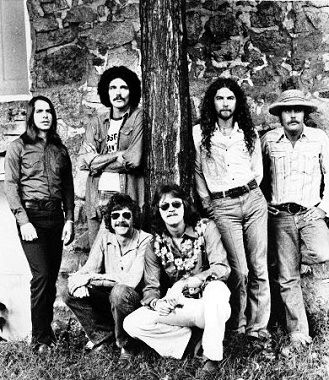 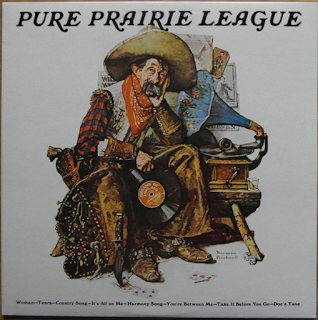 1. Tears
2. Take It Before You Go
3. You're Between Me
4. Woman
5. Doc's Tune
6. Country Song
7. Harmony Song
8. It's All On Me
Pure Prairie League were a US country rock band that originated in the early 1970s. They were named after a fictional 19th century temperance society that featured in the 1939 Errol Flynn movie, Dodge City. This was their 1972 debut album. Their albums featured the same cartoon-ish cowboy character on the cover, making them somewhat difficult to differentiate from each other.

This album is a relaxing, breezy laid-back delight of warm country air. Very much in the early seventies country rock style it is a little known (certainly by me until recently) classic of its genre. The sound quality and musicianship is excellent and if you like easy country rock you will love this. Put this alongside CSNY, The Byrds, Dylan's Nashville Skyline, The Flying Burrito Brothers, America and Gram Parsons.

Tears is a jaunty, finger-pickin' piece of lively country rock, embellished by some excellent riffy electric guitar half way through along with the obligatory steel guitar. The Eagles were surely influenced by stiff like this. Take It Before You Go is also an upbeat number with a regimented but fast drum beat and some more killer pedal steel guitar, The vocals are laid-back and easy on the ear as too is the gently melodic bass. You're Between Me is a slower, more rock-ish but still melodic number with another lovely bass line, fine electric guitar solo and impressive vocal. Craig Fuller was the lead guitarist and vocalist. Gram Parsons must have liked this one, I am sure. The way PPL merge the pedal steel and electric guitars is of of the most striking aspects of their music. 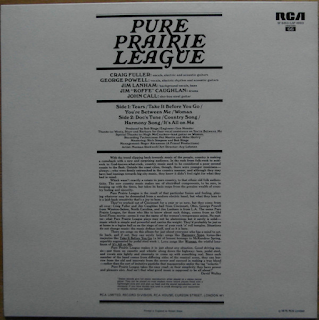 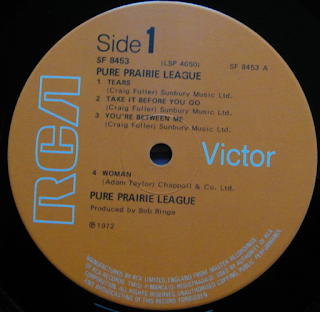 Woman is an absolutely stonking slice of rousing country rock, packed full of wonderful guitar and superb, uplifting vocal harmonies and a solid round of drumming from Jim Caughlan. "Time's so short, please woman wear your hair down for me.." is a great seventies line too, isn't it?

Doc's Tune is a short, pleasant bit of finger pickin' while Country Song is a catchy, energetic with a Nashville Skyline feeling about it, but played much faster. Check out that guitar half way in. This track rocks, in a country way, from beginning to end. It is a lengthy one too - nearly eight minutes and involves some truly excellent musicianship over the final two or three of them as the band go through their paces. It becomes the album's tour de force.

Harmony Song is also a five minute plus number and is a very Eagles-like slow, sad country rock ballad. Again, though, it builds up into a glorious example of musical dexterity. Yes, these are regular country songs but they are enhanced by some genuinely high quality playing. It's All On Me is a plaintive bluesy country twanger brought to life by some punchy rock breaks. Then the album is over before you know it, but what a breath of fresh country air it has proved to be. Why it didn't get more credit beyond the cognoscenti is beyond me. I love it. 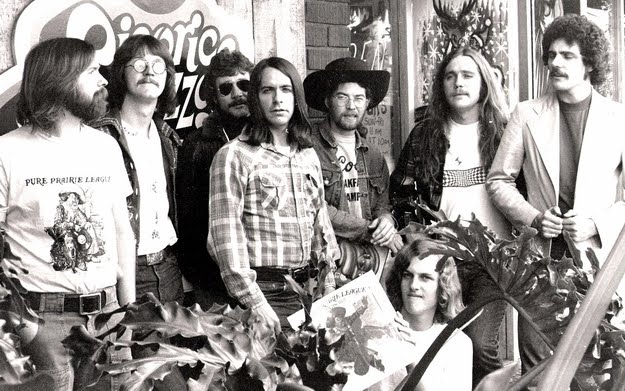 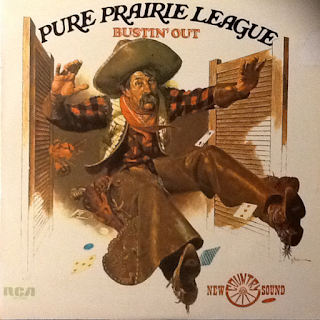 1. Jazzman
2. Angel No. 9
3. Leave My Heart Alone
4. Early Morning Riser
5. Falling In And Out Of Love
6. Amie
7. Boulder Skies
8. Angel
9. Call Me, Tell Me
After an excellent debut album of musically inventive, clever country rock, Pure Prairie League were back, this time, perhaps surprisingly, teaming up with guitarist Mick Ronson, an RCA label-mate, right in the middle of his Spiders From Mars glam period. Ronson contributed guitar and was involved with the strings production. This was something totally different from David Bowie's Ziggy Stardust or Lou Reed's Transformer, his other two 1972 involvements. It was a good job nobody in the glam-obsessed UK knew much about this at the time as his working with a country rock band would have seriously damaged his glam credentials. His influence on here, though, made it a more rocking album than the first one, in places, certainly in the first three tracks. After that a more quite, beautifully string-powered groove takes over, however.

The tuneful, appealing Jazzman is sort of Eagles meets America with bits of Neil Young and early Bread floating around its enticing melody. As always, there is some great guitar and drums on here. Angel No. 9 begins with some instantly recognisable, searing Ronson guitar before the country-styled vocals kick in. It is very much a rock track though, full of riffy power. It is a really good track. It is by far the group's rockiest number thus far in their career. Leave My Heart Alone is equally powerful, featuring some delicious wah-wah style guitar enhancements. This was an example of country rock at its finest. The pedal steel/electric guitar battling that was begun on the previous album is taken to higher levels here as the guitars crash, slash and burn a lot more and the drums pound harder. 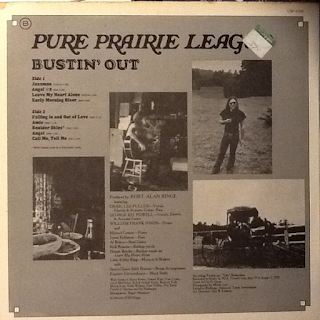 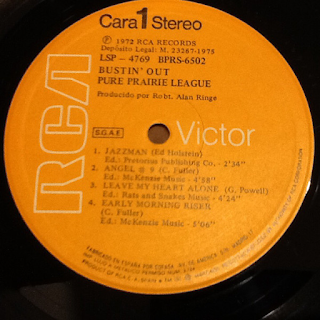 The appealing Early Morning Riser sees a return to breezy, freeway-drivin' Eagles-style light country rock fare. Dire Straits would use the type of guitar breaks that are used here many years later. The vocal harmonies are pleasant too as is the long-ish instrumental fade-out. Falling In And Out Of Love is a very CSN/CSNY influenced acoustic-driven quiet ballad. It segues neatly into the more upbeat, harmonious Amie. This was a very successful track in the USA (being eventually released as a single in 1975) but in the UK it didn't even raise a ripple of interest. It is full of lovely America-style vocal harmonies and that singalong country rock vibe. Continuing the laid-back feel is the entrancing, gentle Boulder Skies. The strings are lovely on this. Ronson did a good job. Who would have thought he had such musical romance in him?

Angel is beguiling, both musically and lyrically. It is another sensitive, mature composition. It stands out when listening to the album for its sheer quality. Call Me, Tell Me is another very CSNY-style song with some interesting string sweeps and an infectious percussion backing. Bruce Springsteen used soaring strings like this a lot on his 2019 Western Stars album. The last sonorous string bit sounds just like the end of David Bowie's Rock'n'Roll Suicide. Concidence? Maybe not.

The music here is intelligent, creative, often beautiful and artistic. It is more than just straightforward country. It is finely-crafted country rock of the highest order. I cannot recommend this enough. The album was, unfortunately, not a success and this line-up of the band split up soon after. What a pity. 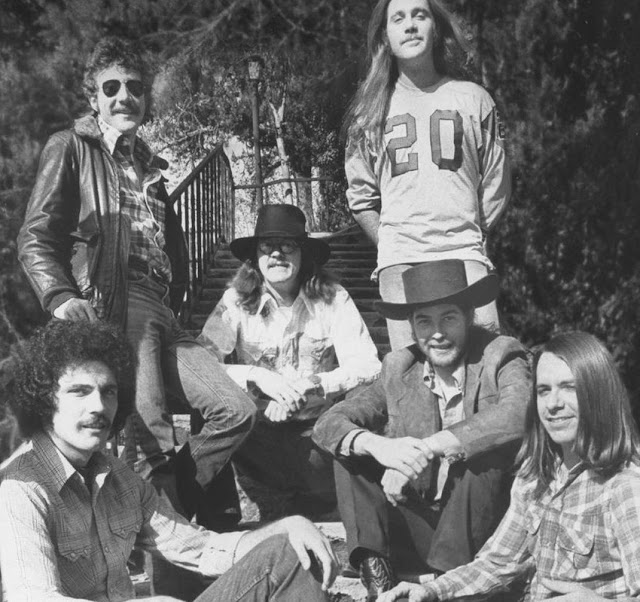 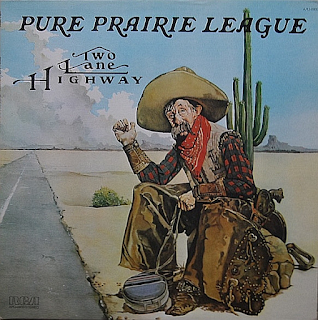 1. Two Lane Highway
2. Kentucky Moonshine
3. Runner
4. Memories
5. Kansas City Southern
6. Harvest
7. Sister's Keeper
8. Just Can't Believe It
9. Give Us A Rise
10. I'll Change Your Flat Tyre, Merle
11. Pickin' To Beat The Devil
Three years since their previous album, and a few line-up changes on, Pure Prairie League returned in 1975, with another serving of pleasant country rock. Singer, lead guitarist and main creative force Craig Fuller unfortunately had to serve six months in jail in 1973 for draft dodging. Fair play to him. He would rejoin the band in 1985. The music definitely suffered as a result and something of the innovative spark of those excellent first two albums was lost. This was a far more mainstream country rock album. It still features some quality material, however.

Two Lane Highway is a lively, Eagles-style piece of driving country radio-friendly rock. Ideal for car radio play and no doubt that is exactly what it got. It has an excellent guitar solo in it too. Kentucky Moonshine is a typical laid-back country song, tuneful and unthreatening. Runner is a gentle, very CSNY-influenced number, full of those breezy country sounds. 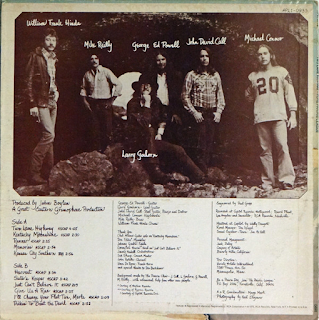 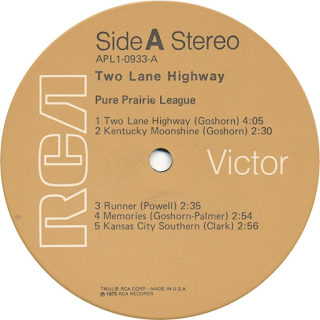 Memories is a mid-pace, melodic steel guitar and piano-driven country ballad. Perfect for a hot afternoon in a country bar. It is time to rock again on the riffy beauty of Kansas City Southern, get out of the bar and back on the freeway again. There is some addictive cymbal work halfway through this, together with solid drums and guitar. Riffage continues on the chunky Eagles-like rock grind of Harvest. You can't go far wrong with stuff like this. Once more, the guitar is impressive.

Sister's Keeper is a delightful, subtly bassy slow number. Somehow I feel Elvis Costello would have loved this one. The same could also be applied to the country standard mournful vibe of Just Can't Believe It. Costello's Almost Blue album was packed full of lachrymose ballads like this one. Give Us A Rise is a lively, bass, drums and steel guitar singalong number, with a catchy la-da-da hook. I'll Change Your Flat Tyre, Merle is a jaunty, amusing country romp in tribute to legendary country singer Merle Haggard with early Dylanesque echoes on the verses. Pickin' To Beat The Devil is, unsurprisingly, full of finger pickin' guitar and lyrics about Kentucky women and Tennessee whiskey. It is an energetic and fun way to finish this enjoyable album. As I said at the beginning, though, the first two albums just had that extra je ne sais quoi. Actually, I do know what it was, it was musical inventiveness and a certain unique quality to the sound. 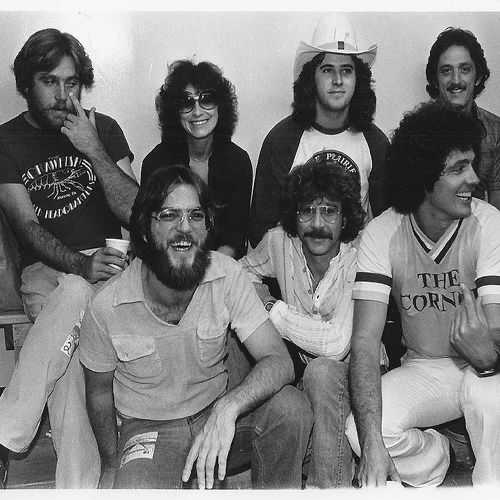 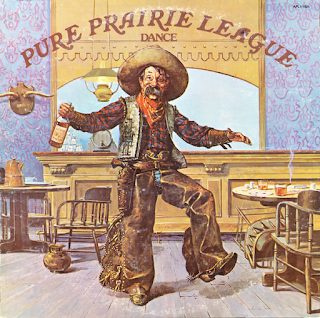 1. Dance
2. In The Morning
3. All The Way
4. Livin' Each Day At A Time
5. Fade Away
6. Tornado Warning
7. Catfishin'
8. Help Yourself
9. San Antonio
10. All The Lonesome Cowboys
Unfortunately, Pure Prairie League's best days were behind them by now. This album was released in 1976 and the late sixties/early seventies country rock boom was very much yesterday's thing. Groups like The Eagles were veering more towards mainstream rock and punk/new wave was about to explode. An album of standard country rock was never going to be too successful and it wasn't. It is enjoyable enough, taken in isolation, however. The group America went the same way over the same period.

Dance is a pleasant enough brassy barroom rocker enlivened by some lively saxophone. In The Morning is a gentle, America-style melodious number that features some fetching country fiddle. All The Way is a steel guitar-powered country tearjerker. Livin' Each Day At A Time is a catchy, appealing song about taking it easy and calming things down, man. Fade Away has a gentle attractiveness too, but it sounds so very 1972. 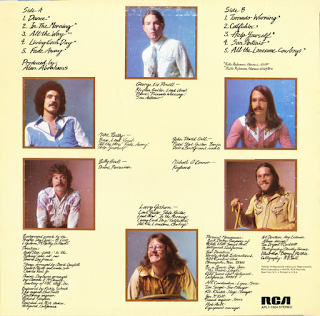 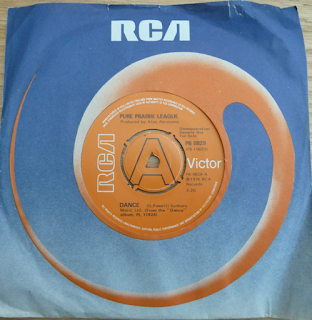 Tornado Warning rocks nicely, a solid piece of riffy country rock. The jaunty Catfishin' evokes that old summery, bluesy, folky atmosphere. All very nostalgic but pretty irrelevant in 1976. Help Yourself has more of a contemporary rock feel about it. San Antonio is just a nice, melodic country song. All The Lonesome Cowboys is a fine rocker to finish on. As I said, a totally unthreatening, enjoyable album, but culturally out of time in 1976. 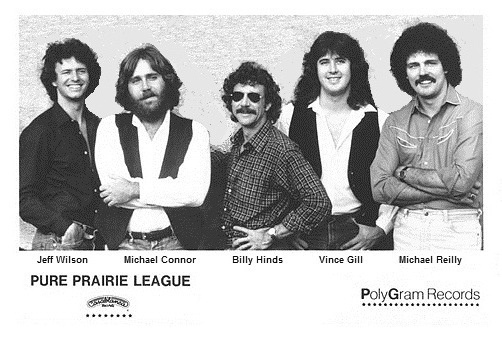