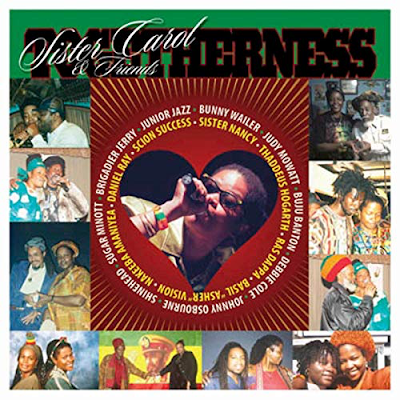 Sister Carol is a Jamaican DJ/vocalist who has been recording since 1981 but this collection of material recorded with many guns reggae/mainly ragga artists dates from 2011. The sound is predominantly ragga with Carol on the DJ chatting vocals associated with the sub-genre. There are influences of dancehall, lovers and even blues, however. It is very much contemporary reggae but is an enjoyable album, even to a reggae traditionalist like me.
Dancing Shoes is a catchy piece of dancehall meets lovers rock featuring Bunny Wailer and Carol giving it the full ragga-style vocals, beseeching old Bunny to “rub-a-dub”. “Not since the days of Solomon and Sheba” has such a thing happened, she proclaims. Ex I-Threes singer Judy Mowatt is the guest on the chunky, slow-paced but powerful Screwface Dem Vex, a song that has those false scratching noises dubbed on to it, to its detriment in some ways. It is still a good track, though. It has a good dubby part at the end.
His Mercy Endureth is an appealing lilting acoustic guitar and Rasta drumming number featuring the evocative vocals of Buju Banton. It has a lot of feel of Banton’s classic Untold Stories about it.
Hempumentary is a deep, bassy thumping ragga cut featuring Debbie Cole. It is similar to Peter Tosh’s Mystic Man in its praise of marijuana’s medicinal qualities.

Satisfaction Guaranteed with Johnny Osbourne is a loved-up slice of ragga with an r’n’b edge complete with sexy female noises. Whether it is Carol giving us those pleasurable moans is not clear. She is back to toasting/rapping form on the grinding, rhythmic Rose In Jah Garden with Shinehead and his unique nasally vocals.
A change of sound is also to be found on the Bill Withers-ish Cold Shack featuring Thaddeus Hogarth. It is an industrial, rock-style number with some fine blues harmonica, a sumptuous slow rock beat and a soulful vocal from Carol. This is ragga with a bluesy edge. 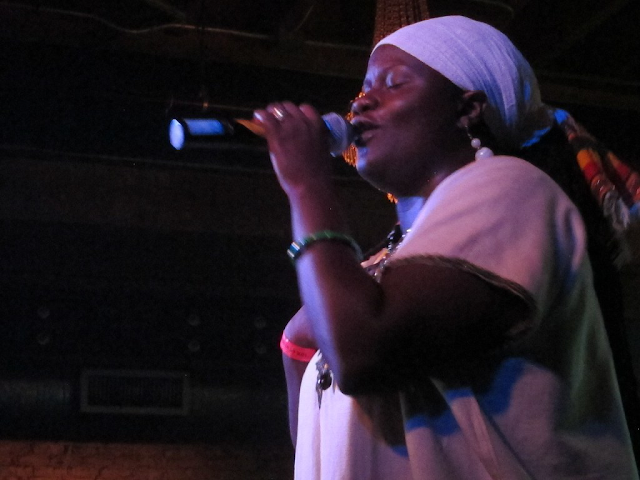 Slackness Bite The Dust with Brigadier Jerry is an upbeat, catchy condemnation from Carol of male “slackness” lyrics. It is actually a fun number with the male and female vocals trading off against each other over a sublime bass line.
Another fine track is the humorous Sellout with veteran Sugar Minott. 70 Sup’m Pieces Of Bob is a delightful, melodic tribute to Bob Marley, name checking many of his songs, one after the other. Nice one.

Got To Be Strong with Ras Droppa has an infectious, rumbling and roots bass line and just a really good vibe about it. Loose and easy. Some nice lead guitar in it too.
Inspire Me with Basil “Asher Vision” Gayle is a delight, full of soulful emotion. It is an uplifting, acoustic number as opposed to a reggae/ragga one. It is one of the album’s unexpected treasures.

“Calm down youngster and respect the elder…” advises Carol on the staccato, ragga sounds of Hype-Up, with Nakeeba Amaniyea. It is a track that sees a return to contemporary rapping vocals.
Let Jah Music Play with Daniel Ray, despite its rootsy title, is a very chilled-out number, with gentle rhythms and vocals. Some big bass rhythms are back on Millennium Bam-Bam with Sister Nancy. It is one of those “bong biddly biddly bong” vocal numbers. Scion Success joins Carol for Zimbabwe Remake which covers the 1979 Bob Marley track, effectively.
The album ends with the gospel meets soft rock strains of Jah Will Help Us All, credited to Sister Carol herself.

This is an excellent album of contemporary reggae, covering quite a few different styles and always keeping our interest. The sound quality is impressive too.