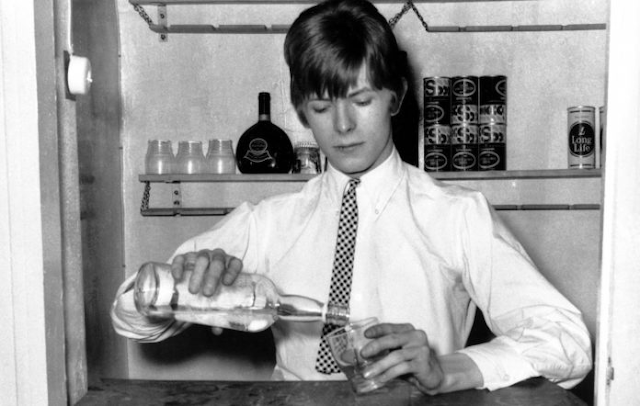 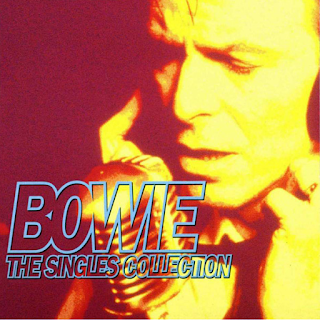 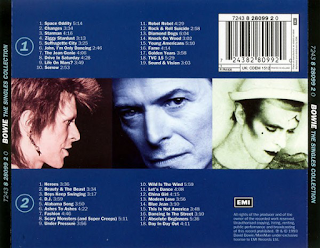 Despite the plethora of David Bowie singles and “greatest hits” collections, four or five of them at least, this somewhat dated one from 1993 is still a good introduction to the golden era of Bowie's single releases. You can pick it up second hand for next to nothing these days and it is well worth it.

Thankfully, unlike on most of the other compilations, Young Americans hasn’t suffered the criminal butchering that is the single version, which is nigh on unlistenable. Funnily enough, I bought it as a single upon release in 1975 and it was the full 5 minute version. Other tracks are abridged however but most people dipping their feet into the Bowie water won’t mind.

Of course, this compilation ends with material from 1987’s Never Let Me Down so it misses out the later years of his great career, but these really were the glory years. 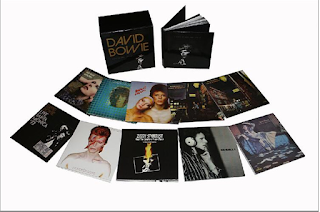 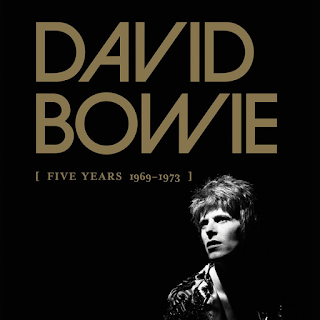 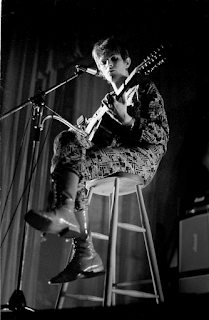 All the remasters are excellent, although I also have time for the 1999 remasters and the "anniversary" remasters of Space Oddity, Ziggy Stardust and Aladdin Sane. The two live albums are also great to hear. I prefer the Santa Monica one, it has more punch and attack from The Spiders, almost punky in places. The Hammersmith Odeon concert is, of course the legendary "last show we are ever going to do" one.

The singles and "rarities" contains some interesting material - 'b' sides Round and Round, Holy Holy and the wonderful Velvet Goldmine. Unfortunately, Sweet Head is not included. Yes, I know it was not a single or a 'b' side, but it really is worthy of inclusion in a career-covering box set. Regarding "single versions" however, they are of no interest to me. I invariably prefer the album cut.

The "2003 Remix" of Ziggy Stardust sounds no different at all, to me. Maybe it is just me, but it sounds the same as it always did. Maybe a few bits here and there or am I imagining it? 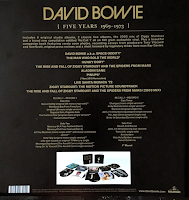 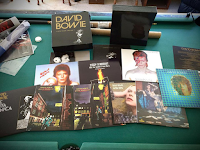 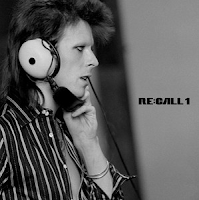 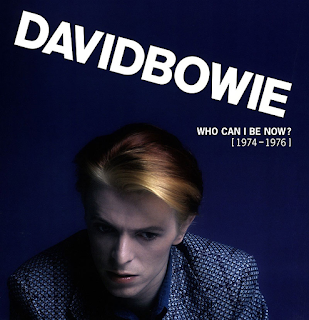 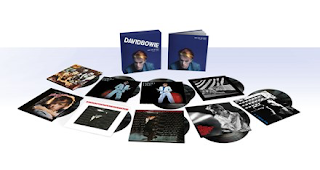 Included in this box set are:-

All the remasters are excellent, although I also have time for the 1999 remasters and the "anniversary" remasters of Diamond Dogs, Young Americans and Station To Station. 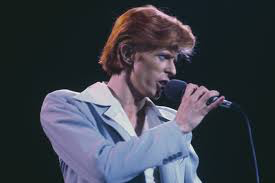 The live Nassau Coliseum double album is excellent both in sound quality. Really enjoyable. Some have criticised it, but I at a loss to understand why. The Tony Visconti remaster of David Live is a revelation and the Harry Maslin Station To Station remix is a wonderful listen, really enhancing the album in places. I don't subscribe to this "holy grail" status applied to these albums, in that they cannot undergone new mixes. I am quite happy with them. Bowie was alive when they were done, so he, the great innovator, was presumably happy with them too.

The "single versions" of songs are of no interest to me. I invariably prefer the album versions. Indeed, the single edition of Young Americans is an act of despicable butchery and should never, ever, be listened to. 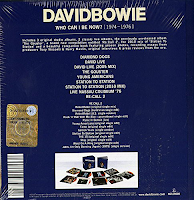 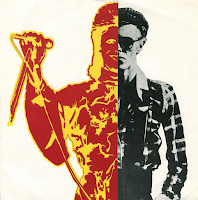 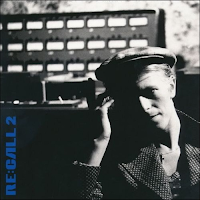 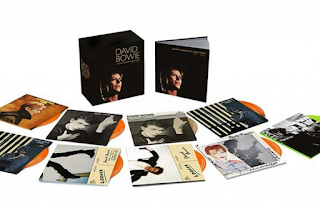 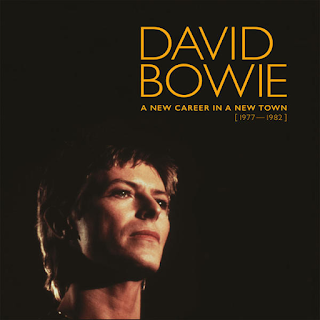 There has been so much hoo-hah about this release, largely due to the original sound "drop out" on the song "Heroes", which was undeniably unforgivable. However, it happened, and certainly the correct track is available to download. I am not sure about other formats.

Many people were up in arms about the Tony Visconti remasters, which they felt were not too their taste. I did not agree at the time, and time has not made me change my opinion. Without wishing to disrespect their opinions, I will simply say that, for me, these Visconti remasters are superb, across the board. Low is big, booming and bassy and I love it that way. I have waited forty years for it to sound like that. If that is how Tony Visconti wants it to sound then, as a long time fan of his, that is totally fine by me. I my view, Speed of Life sounds bloomin' marvellous, as does Sound And Vision and indeed all the old "side one". All powerful and full of bass, finally rid of that tinniness that blighted early releases of the album. The instrumentals are beautifully resounding, even more atmospheric than before.

"Heroes" is clear, sharp and industrially sonorous, as it should be, a once stark and tinny album is now a genuine pleasure to listen to. I am loving getting to listen to tracks like Sons Of The Silent Age, Blackout and Joe The Lion through new ears, so to speak. The instrumentals are again truly outstanding. Check out that bass on V2 Schneider.

Visconti's remix of Lodger is, quite simply, a revelation, giving it a completely new life. If it loses a few seconds here and there on a couple of tracks, it really doesn't bother me. The actual remaster of Lodger is superb too, taking previously muffled, lifeless tracks and once again breathing new life into them. Just listen to African Night Flight, Move On and Red Sails. Great stuff. Like listening to new tracks. I have waited nearly forty years for this album to be remastered. At last. 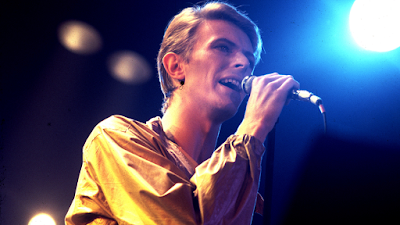 Scary Monsters shows the least obvious improvement, as the last remaster was perfectly acceptable. This one is still good though.

Stage is vastly improved upon, particularly in its expanded "full set" version. I have reviewed it in full detail under its individual listing. The original, oddly arranged track listing version of Stage is included here, but it is rendered pretty superfluous by the inclusion of the proper set list running order. As for the "single versions", I have no interest in them. Invariably I prefer the full album versions in every case. The French and German versions of "Heroes" are interesting but no more. 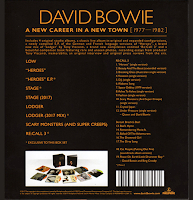 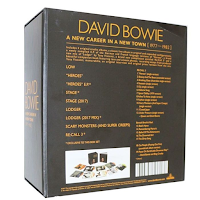 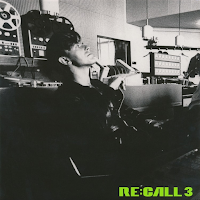 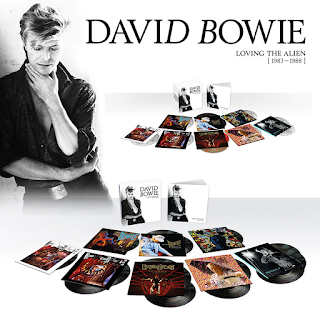 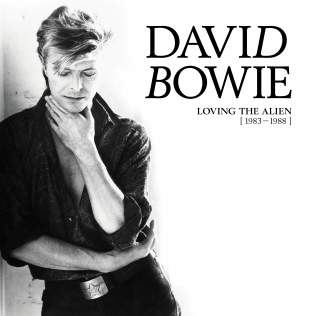 Now, I am certainly no “audiophile” as readers of my reviews will know. I like my music big, bassy and powerful. For that reason I loved the New Career In A New Town box set. I absolutely adored the latest 2017 bassy remastering of Low and even more so Tony Visconti’s magnificent remix of Lodger. I also have no problems with the 1999 remasters of Bowie’s work on the whole, and I find the RYKO remasters lifeless and tinny. So, this is the direction I am coming from. If you disagree, and there are undoubtedly many out there who will, it is probably best to ignore my review!

Let's Dance is remastered nicely for me - full, punchy and bassy. I feel it has been considerably enhanced and sounds a more muscular album now. That, for me, is a good thing. It is actually on of the Bowie albums I return to the least, so this is a good way of getting reacquainted with it again. (I have reviewed all these albums under their individual listings, with regard to the actual music contained on them. This review is more about the remastering).

Tonight is an album I have always had time for, despite the criticism that follows it around. It also sounds excellent here. The sound on God Only Knows and Loving The Alien is superb, and also on the most underrated Don't Look Down. Again, nice and balanced, breathing sound, but bassy too. Great stuff. The lesser-known tracks on the old “side two” sound great too. This remaster gives albums like this a new life.

Never Let Me Down has always been somewhat unfairly treated. I have always quite liked it, perverse as though that may sound to many people. The sound on the 1999 version was always fine, for me. Here it is less harsh, nice and thumpy in places, although some of the excesses of eighties production will obviously always be there. Nobody can tell me that Time Will Crawl isn't a great track, though. The 2018 remix of it is exceptionally enjoyable. It is great to hear stuff like this - Zeroes, Beat Of Your Drum, Day In Day Out are all given new life. In fact they all are, even the lesser tracks like Shining Star and New York's In Love are positively revelatory. The posthumous work done by Bowie’s mates on this is respectful and innovative. You feel he would have approved, as he was never happy with the original album.

The live material is wonderful. Both have truly excellent sound quality and it is good to finally get offical, good-sounding live material from these two tours. It is interesting to hear the different styles in which songs were played, for example the saxophone on What In The World and Breaking Glass from the Serious Moonlight gig. It is good to see a saxophone-drenched Sorrow, the difficult to play live Young Americans and All The Madmen getting airings for the first time officially on a live recording. Add these to last year’s Cracked Actor and this year’s Welcome To The Blackout and it has been a great period for Bowie live material, after all those years of surviving with David Live, the Final Ziggy Concert, Santa Monica and Stage, we now have so much more to enjoy. Young Americans, by the way, is played much better at the Glass Spider gig than the Serious Moonlight one. For me, it is rewarding to hear my favourite Bowie song of all time given a decent live performance.

As for the Dance mixes. They are interesting and quite enjoyable to listen to, with dubby bits on some of them, although there are other versions available on the downloadable mini singles, some of those are included here, but certainly not all of them. 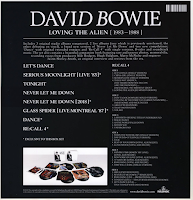 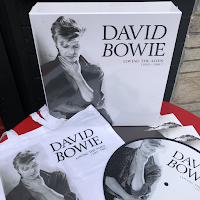 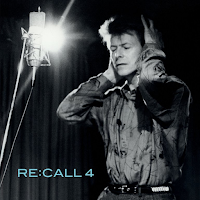 With regard to the Re:Call material, I have no interest in single versions of any songs, to be brutally honest. I can’t see the point and they are all invariably superior in their album format. Well, in my opinion anyway. I do not have those sort of completist instincts. It is good to get remastered versions of obscurities like Julie, Girls, Underground and the excellent This Is Not America. I am completist when it comes to those, however.

Overall this is, as all the other Bowie box sets were, thoroughly enjoyable.