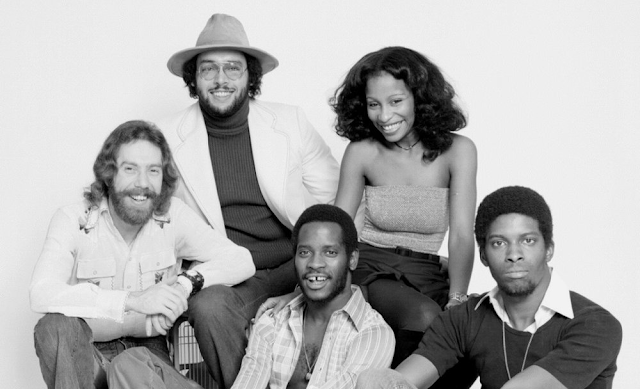 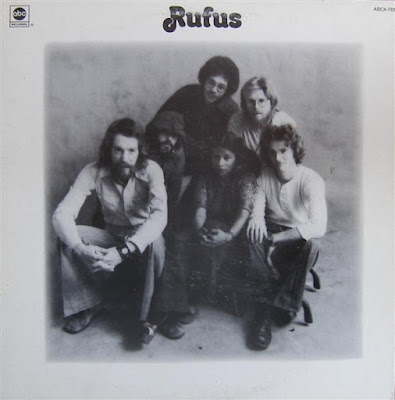 Slip 'n' Slide/Keep It Coming/There's No Tellin'/Maybe Your Baby/I Finally Found You/Feel Good/Satisfied/Haulin' Coal/Whoever's Thrilling You (Is Killing Me)/Medley - Love The One You're With-Sit Yourself Down
This 1973 debut album from Rufus is totally different from the albums that made their name from the following year. Surprisingly it is far more a rock album with soul and gospel influences than it is a soul/funk album like its two highly successful follow-ups. It is a rick album in essence featuring a soul vocalist in Yvonne Stevens (soon to be known as Chaka Khan here). It makes for a highly interesting album.
Slip 'n' Slide is a breakneck, rollicking serving of rock 'n' roll meets gospel, with all the group's vocalists giving it their all.
Ashford and Simpson's Keep It Coming is a bassy, rock-ish mid-pace number that showcases the remarkable voice of vocalist Chaka Khan.
Ron Stockert takes lead vocals on the Tumbleweed Connection-era Elton John style orchestrated ballad, There's No Tellin', that features some very Billy Joel-esque piano and a killer lead guitar solo. There is not a funky groove to be found here.
Funk first appears on the delicious wah-wah and chunky drums backing of Stevie Wonder's Maybe Your Baby, which actually improves on the original, both instrumentally and due in no small part to Khan's towering vocal. Once again, the mid-song fuzzy guitar solo is outstandingly good.
I Finally Found You is a piano-led slowie that has Chaka in Tina Turner mode on the vocal. The bass and piano backing is lovely. Good song.
Feel Good is an infectious piece of funky rock with a great riff and another fabulous, rubber-band bass line. Satisfied rocks with a gospel vibrancy from its very first note, in a most unique fashion - this really is an impossible album to categorise.
The Elton John vibe is there again on the gentle, soulful piano and vocal strains of Haulin' Coal. Stockert is on lead vocals again, sounding a lot like Leon Russell, in that nasal sort of way.
Chaka is back is the chunky, bassy Southern soul of Allen Toussaint's Whoever's Thrilling You (Is Killing Me) and the album finishes with covers of two Stephen Stills songs - Love The One You're With and Sit Yourself Down. The former is slowed down, initially, to a piano, organ and voice gospel groove until it bursts out, Proud Mary-style to a marvellous piece of soul boogie which continues into the second song.
This is well worth checking out. It was all change after this however.
Rags To Rufus (1974) 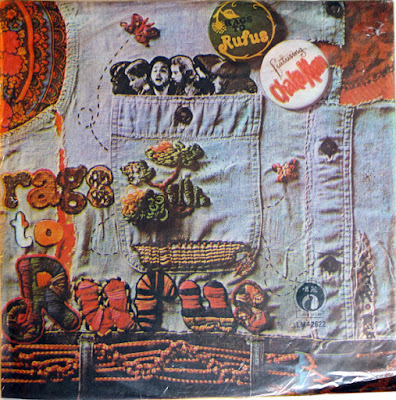 You Got The Love/I Got The Right Street (But The Wrong Direction)/Walkin' In The Sun/Rags To Rufus/Swing Down Chariot/Sideways/Ain't Nothin' But A Maybe/Tell Me Something Good/Look Through My Eyes/In Love We Grow/Smokin' Room
This was Rufus's second album, dating from 1974, and is pretty much more of the same fare as their first offering - raw, cookin' funk and sumptuous, soulful ballads. It is slightly the better of the two albums, being more varied in style. In my view it tops Rufusized, from later in the same year as well.
You Got the Love is a superb, funky opener featuring some absolutely stonking lead guitar. This was one of Rufus's strength - they merged rock instrumentation with funk most effectively. This is a copper-bottomed accessible funk classic, a truly superb track.
I Got the Right Street (But the Wrong Direction) is another pot boiling funker, with more great guitar, as too is the grinding Blaxploitation soundtrack-ish instrumental, Rags To Rufus. Check out that freaky keyboard solo. This is seventies funk of the highest order, recorded in superb sound quality too.
In between these tracks, up third, is the uplifting, gospel-influenced ballad, Walkin' In the Sun, which has a killer bass line and a fantastic Chaka Khan vocal.
Swing Down Chariot is, perhaps unsurprisingly, a rousing gospel duet between Khan and Ron Stockert, who interestingly left the group half way through the album's recording, unhappy at the promoting of Khan at the head of the group. It features some seriously stonking saxophone too.
Sideways is a brief funky instrumental that leads into the guitar-driven and nicely orchestrated slowie Ain't Nothin' But A Maybe.
Stevie Wonder's Tell Me Something Good is a typically clavinet-powered chunky piece of slow, grinding funk.
Look Through My Eyes is a deliciously catchy and funky number while In Love We Grow is a dramatic, piano-backed Chaka shrieker.
The album closes with the peacefully rhythmic strains of Smokin' Room, with its sweeping strings, infectious gentle congas and, of course, a fine Chaka vocal. Overall, this is a soul/funk album worthy of high regard. It deservedly sold loads.
Rufusized (1974) 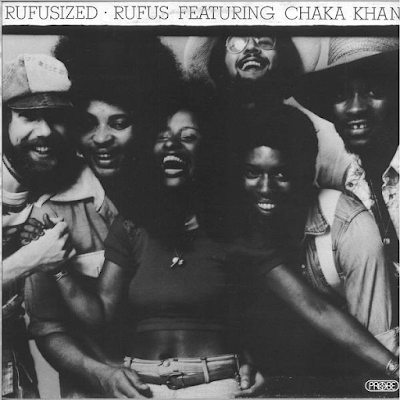 Rufus had released one very unsuccessful debut album of funk/soul in 1973, and changed their line-up considerably for their comparative breakthrough offering the following year, Rags To Riches, so much so that they were virtually a new band. That album provided a showcase for the vocal talents of one Chaka Khan and this was continued here on their third outing.

With a few seconds of the upbeat funky brass and wah-wah-driven Once You Get Started beginning, Chaka Khan arrives with her distinctive multi-pitched vocals. Sometimes high, sometimes low, sometimes gruff and gritty, sometimes sweet and melodious - her range is most impressive. Fellow vocalist Tony Maiden provides a great contribution too and the music is top notch - ass-kicking funk of the highest quality. Just check out that throbbing, rubberband bass and those funky guitars. Rufus gained appearances on Soul Train on the back of this and you can hear why. The song's rhythm has an early disco groove that was actually quite ground-breaking. The sound is superb too - big, full, warm and bassy.

Somebody's Watching You is a cookin' piece of down 'n' dirty funk/soul - tuneful and earthy at the same time. Its influence on Michael Jackson's Off The Wall era material is clear.
Pack'd My Bags is more of a straight ahead sumptuous slow soul number than a funker, despite a funky break in the middle.
Your Smile is far more laid-back and sublimely soulful. The sound quality on here is outstanding and again, I can't state it enough, this is some of the best seventies soul around. Khan's vocal on this song is magnificent. 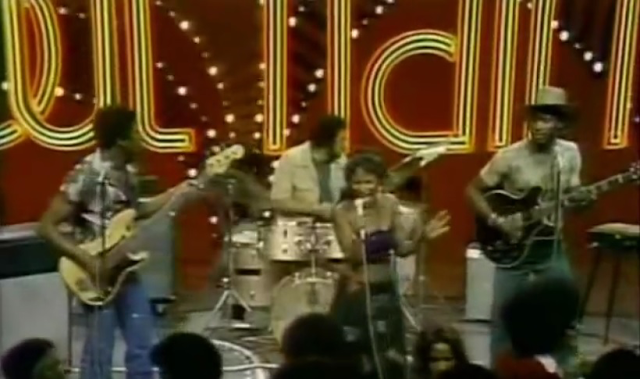 Rufusized is an early Commodores-style, organ-driven funky semi-instrumental with only occasional backing vocals, great saxophone and funky guitar as well.
The solid funk of I'm A Woman (I'm A Backbone) is a prototype I'm Every Woman and typical of the burgeoning number of strong female singers and songs that emerged in the early mid-seventies. Sisters were doing it for themselves.
Right Is Right is so deliciously funky it hurts. That guitar is right on the money, man. The funk continues apace on the upbeat, frantic Half Moon, which is chock full of organ breaks, pulsating bass and fast shuffling drums.

Please Pardon Me (You Remind Me Of A Friend) is representative of a lot of the soul songs of the period with a mini-story based within its three soulful minutes.
Stop On By ends this excellent album with an appealing slice of slow-burning, bassy funky soul. It was a cover of a Bobby Womack song. Overall, this album was one of the seventies' finest examples of funk-edged soul.
Rufus Featuring Chaka Khan (1974) 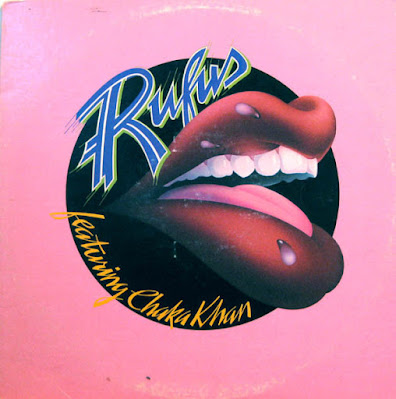 Fools' Paradise/Have A Good Time/Ooh I Like Your Loving/Everybody Has An Aura/Circles/Sweet Thing/Dance Wit Me/Little Boy Blue/On Time/Jive Talkin'
This was Rufus's third album of funky soul in just over a year. It slightly lacks the spark and variety of the previous two, sounding a lot like the albums that Chaka Khan would release towards the end of the decade. By now all rock/soul fusion had been forgotten - it was soul/funk all the way. The cover was great too, although it owes more than a little to The Rolling Stones' 'lips' design.
Fools' Paradise is a slick, effortless offering of jazzy Crusaders-influenced funk and the same applies to the party starter, the upbeat Have A Good Time.
Ooh I Like Your Loving is more slow-paced, plodding funky soul but it is in possession of a sublime bass line. I am sure David Bowie was influenced by the layered backing vocals for the material on his Young Americans album the following year.
Everybody Has An Aura is a seductive, insistent brassy funk groove which seems pretty formulaic now, but at the time was reasonably new in its slick, smooth, late-night vibe. It too the orchestration of Philly Soul and funked it up.
Circles is irresistibly attractive in its shuffling funk and it goes without saying that Chaka's vocals are stridently impressive, as are the robust keyboard lines.
Sweet Thing is a track that would provide a template for numerous soul/funk bands over many subsequent years. Indeed, bands are still playing in this style today, such as the UK's SouLutions.
Dance Wit Me ups the beat from end-of-the-evening smooching to mid-evening getting down with a lively keyboard/bass/drums-powered groover. Give some time to the bass/cymbal/keyboard interplay at the end.
Little Boy Blue is string-backed soul/funk by numbers - nothing special, but still eminently listenable.
On Time is an appealing, mid-pace jazz-funky instrumental, while The Bee Gees' Jive Talkin' is slowed-down considerably and undeniably enhanced by Khan's vocals, but personally prefer the original's speed.
The band would go on to release two more with Chaka Khan on lead vocals, before she left to pursue her successful solo career. 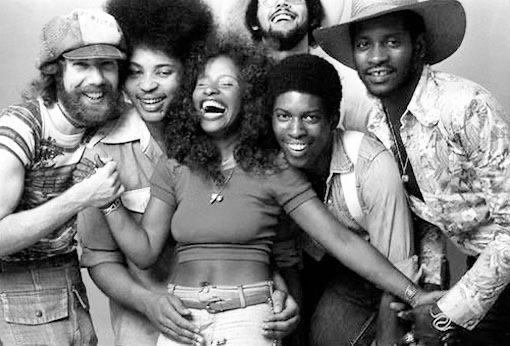