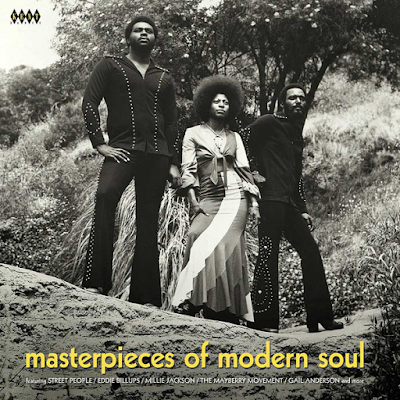 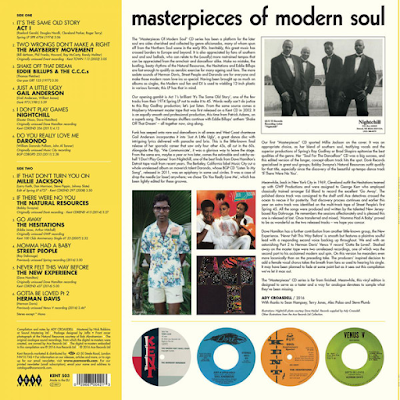 It is a strange phenomenon, "modern soul". It is made up of seventies (mainly US) soul obscurities, but, as opposed to Northern Soul, which was all about upbeat Motown-influenced danceable pop/soul, this is more of a smoochy, smooth, "late night" soul sound, but still with a catchy beat to it. It is more upbeat than Luther Vandross or Barry White, with a bit of a Harold Melvin/Philly soul feel to it. While there are hints of Northern Soul in some of the songs, you can, after a short while, pick out a "modern" song from a "Northern" one.

This is the first in an excellent series of compilations from the much-respected Kent Soul Records label. The sound quality is superb throughout. All these songs are genuine rarities and, listening to the sheer, joyful exuberance to them, you have to wonder why. These are songs that deserved success, but unfortunately didn't get it.

Act 1 were a group launched in Los Angeles in 1972 by producer Rafael Gerald. They released only one album, in 1973. They had a surprise hit on the Northern Soul scene in the UK in 1975 with the funky, lively groove of Tom The Peeper. Their song on here, It's The Same Old Story is a marvellous O'Jays-style Philly-influenced piece of orchestrated, catchy soul. It has hints of Diana Ross & The Supremes' Some Things You Never Get Used To.

My favourite track on the album is the wonderful Two Wrongs Don't Make A Right by Mayberry Movement. They were a 1974 soul group based around brothers Russell and Jesse Mayberry. The song is an infectious Tavares-style number that has a real uplifting hook. It is classic mid-seventies soul and really should have been a hit. It is the sort of song that has the feel of a Northern Soul classic about it, although the sumptuous Philly soul type backing sort of slightly discounts that. I've just listened to it four times. Lordy, what a record.

Eddie Billups's deliciously groovy Shake Off That Dream has more solid Northern credentials, to be honest. It is a stonker of a track, full of irresistible hooks, deep, rumbling, rubberband bass and a great lead vocal. It has become a bit of a cult favourite among the soul cognoscenti.

Gail Anderson was around singing for quite a while, from the sixties through to the eighties and Just A Little Ugly is a muscular serving of down 'n' dirty funk with a bit of a Blaxploitation, brassy feel to it. It is a seriously high quality "rarity".

Nightchill were a mid-seventies Detroit male vocal group, and their I Don't Play Games is a slow burner of a soul/funk song. It could almost be an eighties/nineties soul song in many ways. Again, it deserved far more success than it got. It is a top notch cut.

Darondo was an interesting character from the San Francisco area with a bit of a dodgy reputation. His cut here, Do You Really Love Me, is a jazzy shuffle of Brazilian-sounding soul. The only really well-known artist is lovable sexpot Millie Jackson, who contributes the fabulously appealing and punchy If That Don't Turn You On. Millie is quality, end of. This is a great track. Try keeping still to it. No? Told you.

If There Were No You by Natural Resources is a typical piece of upbeat mid-seventies soul, (although funnily enough I think it dates from the late sixties) while Go Away by The Hesitations has a real slightly faster, almost, but not quite Northern Soul beat to it. I can find no information about the record or the group, other than that they existed from 1965-68.

Momma Had A Baby by Street People is a great track with hints of The Temptations' psychedelic soul era to it. It features some sublime funky wah-wah guitar and also some impressive shared vocals. They were another group who only released one album, in the mid-seventies. That was a real shame because this is a seriously good record.

Never Felt This Way Before by New Experience is a corker of a funky groove. This record and the group are a mystery, unfortunately. How is that great records like this are so obscure?

Herman Davis's Gotta Be Loved Part 2 dates from 1971. Strangely, it appears to be one of those "Part 2" "b"sides that basically involves fade out backing vocals as it only lasts a few minutes. Why couldn't we have had Part 1? That appears on Volume Four of this series.

As I said at the beginning, I can't believe that this stuff comes from the vaults. They were some vaults in the seventies, weren't they?