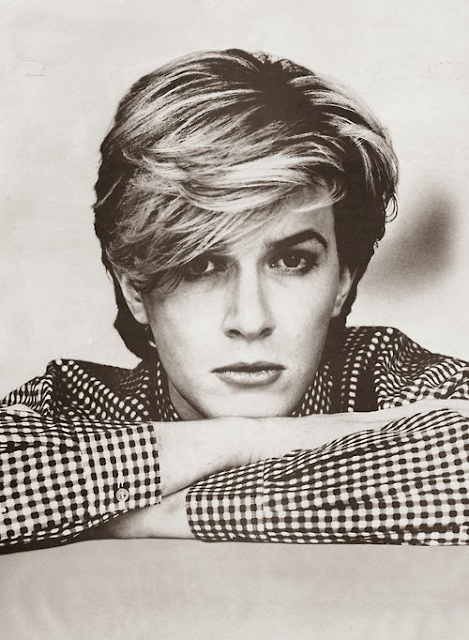 I was never a particular fan of Japan, a (supposedly*) New Romantic group fronted by blonde, floppy wedge-haired David Sylvian (named after the "crashing out with Sylvian" lyric from David Bowie's Drive In Saturday), but I have this one collection of their work. Sylvian's music was very influenced by Eastern culture and sounds, as well as the afore-mentioned Bowie, The New York Dolls and Roxy Music/Bryan Ferry. It was very atmospheric and haunting but also attracted accusations of pretention. Musically, though, the group always had an inventive, well-delivered sound and Sylvian had a certain amount of mysterious charisma. They were not commercial enough to storm the charts as other New Romantics did, but their output was thoughtful and adventurous. *To be fair to the group, who disassociated themselves totally with the New Romantic movement, they had been putting out albums since 1978 (five in total) and split up in late 1982, when many New Romantic groups were only just starting. 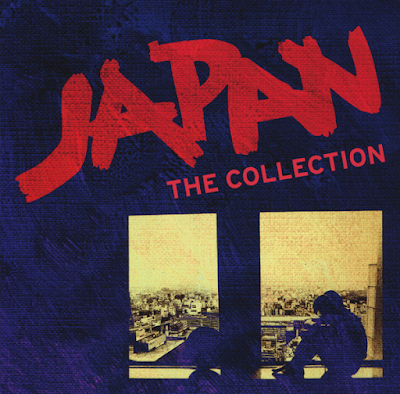 Quiet Life is a sonorous, thumping sort of New Romantic meets David Bowie number. It has echoes of Bowie's Boys Keep Swinging in its "Boys" refrain and the beat/guitar chops/keyboard swirls are straight out of the Duran Duran/Ultravox songbook. Both of those groups must surely have listened to this in 1979 when it was released. Its influence on both of them is clear to hear.
The stuttering, staccato beat of Visions Of China is very addictive in that early eighties sort of way and the shrill saxophone is very much influenced by Andy Mackay's early Roxy Music work. Sylvian's mannered vocal is very Bryan Ferry too. The drum sound is very tribal in that Adam And The Ants way. 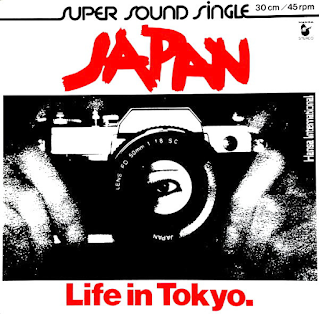 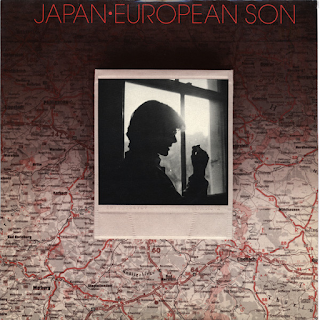 The vocal on Ghosts is so Ferry it could almost hear. The song was one of the group's most successful, but it is totally uncommercial, with a sombre, mournful "Heroes" type sound and some strange sound effects.
A surprise hit for the group was a cover of Smokey Robinson's I Second That Emotion. The version is full of metallic-sounding saxophone and contemporary keyboard noises. It doesn't match the original but as a period piece from the early eighties, it works fine.
Another popular track of theirs was the pounding eighties strains of Life In Tokyo, which makes it on to several New Romantic playlists. It has some excellent synthesiser breaks and a solid bass line. Sylvian again sounds like Bryan Ferry, let's take that for granted now, shall we?

The lively European Son fits the musical zeitgeist perfectly - grand synthesisers and robbery, vibrating bass runs. Sylvian's vocal is more punky in a whiny sort of way on this one. A wonderful song for Japan to cover was The Velvet Underground & Nico's beguiling All Tomorrow's Parties. They do it justice - full of early Roxy Music saxophones and Bowie-esque instrumentation and a mysterious vocal. Once more, the bass line is delicious.
Adolescent Sex is a typical piece of early eighties New Romantic disco fare. It has an infectious riff and that punky vocal again.

A strange cover is Don't Rain On My Parade from the Barbra Streisand's 1964 musical, Funny Girl. It is given a full-on punky attack, both musically and vocally, taking all possible camp intonations from it.
In Vogue returns to the deep, captivating moods of some of the earlier material. It is a most sexual, entrancing track. It has a great keyboard backing on it and is one of the album's best cuts.
The Unconventional has an impressive funky guitar riff, a muscular beat and Sylvian delivering a Parliament-Funkadelic-style vocal. The group could funk out if they wanted to and proceed danceable stuff like this.

Communist China has a great riff to it too and another punky vocal in a sort of New York Dolls style. Suburban Berlin also has a bit of a punk noir ambience to it, with some great guitar interjections throughout. The bass solo half way through is simply sumptuous. Halloween has an archetypal early eighties feel to it. Whether the group considered themselves New Romantic or not, tracks like this certainly sound like it. In many ways, the genre was started by Japan, many others were basically imitators.
Email ThisBlogThis!Share to TwitterShare to FacebookShare to Pinterest