Can you dig it, brothers and sisters.... 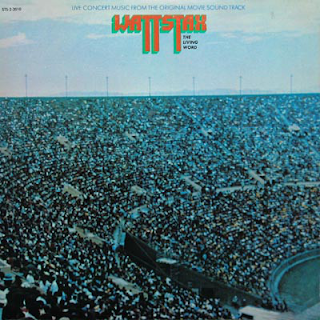 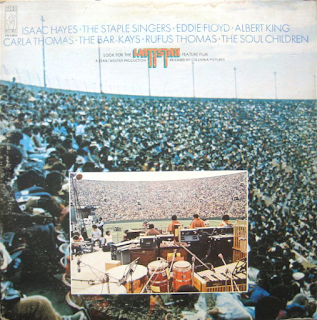 Wattstax was a benefit concert performed on August 20, 1972, organised by Stax Records on the 7th Anniversary of the Watts riots in Los Angeles The concert took place in the Los Angeles Coliseum and tickets were $1 each, ensuring many African-Americans could attend. 112,000 duly attended. The crowd was most African-American and it was policed by African-American officers.

The music was soul, funk, blues, gospel, r 'n' b n jazz and a lot of it had a theme of conscious, aware positivity for black Americans. This compilation is the most comprehensive and includes most of the show. Some songs from previous compilations from the show do not appear, though, like Eddie Floyd's Lay Your Loving On Me, several Isaac Hayes tracks and some others. Either way, it plays like one continuous show.

There are actually three different compilations from the show, so by sourcing all three you can get all the songs covered.

The sound quality is pretty good for an outdoor 1972 live recording, as, of course, is the music. The concert took place at the height of the early seventies funk/soul era and we get a lot of it too - wah-wah guitars and horn breaks all over the place. 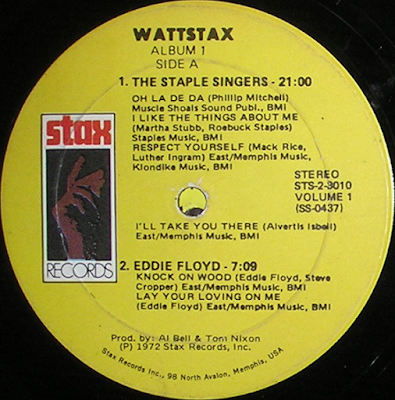 1. Salvation Symphony
2. Introduction - The Reverend Jesse Jackson
3. Lift Every Voice And Sing - Kim Weston
4. Heavy Makes You Happy (Sha-Na-Boom-Boom) - The Staple Singers*
5. Are You Sure*
6. I Like The Things About Me*
7. Respect Yourself*
8. I'll Take You There*
9. Precious Lord, Take My Hand - Deborah Manning
10. Better Get A Move On - Louise McCord
11. Them Hot Pants - Lee Sain
12. Wade In TheWater - Little Sonny
13. I Forgot To Be Your Lover - William Bell
14. Explain It To Her Mama - Temprees
15. I've Been Lonely For So Long - Frederick Knight
16. Pin The Tail On The Donkey - The Newcomers
17. Knock On Wood - Eddie Floyd 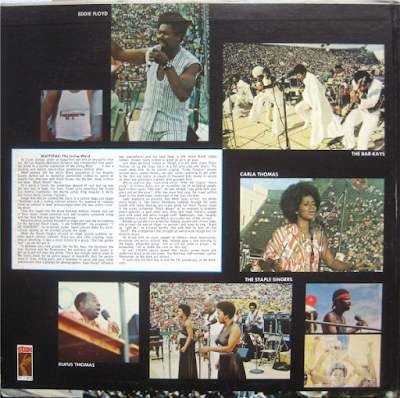 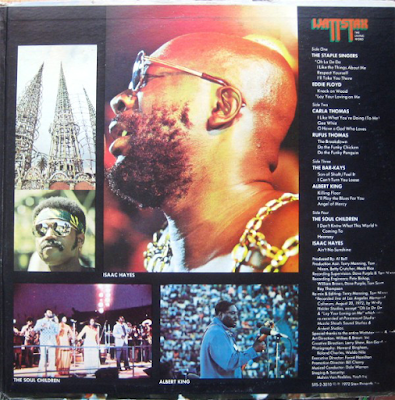 The Staple Singers (pictured) perform an excellent five song set, as you would expect, including I'll Take You There and Respect Yourself and Roebuck "Pops" Staples doing a rap where he praises the achievements of black people throughout history. Stevie Wonder expanded on this on his Songs In The Key Of Life album in 1976. Louise McCord's Better Get A Move On was a solid, muscular piece of wah-wah-driven soul/funk. 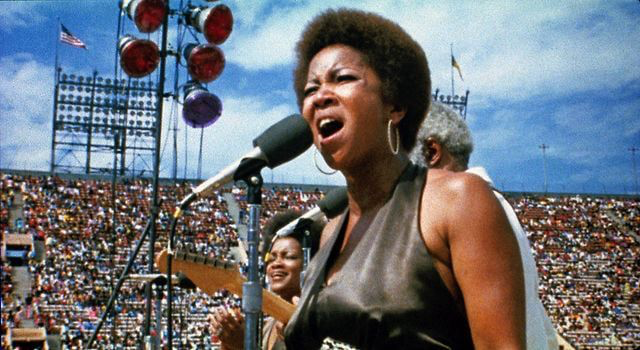 The CD opens with The Emotions' nine minute gospel/soul of Peace Be Still. The vocal performances are outstanding and there is a palpable live atmosphere as you hear the crowd getting involved. For me, though, it goes on a few minutes too long, although that is a bit of a nit-pick. The Golden 13 lift everyone high up with some classic upbeat, hand-clapping gospel in Old Time Religion. The Rance Allen Group were a group I was unfamiliar with, and they provided a couple of infectious pieces of funky, soulful jazzy stuff. 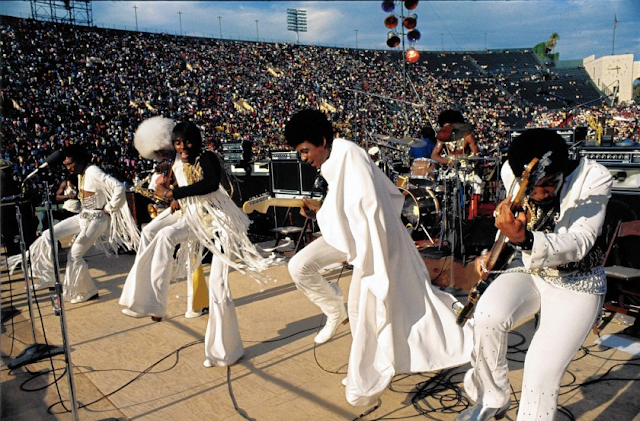 The Bar-Kays (pictured) deliver some superb early seventies funk with the lengthy workout Son Of Shaft/Feel It. Their set was one of those bits in a show like this when everything comes even more alive. In The Hole is almost psychedelic rock meets Stax - far out man. Their cover of Otis Redding's I Can't Turn You Loose is cookin' hot. Stax songwriter composer David Porter contributes some punchy, typically Stax-y soul - full of rumbling bass and strident brass. His Can't See You When I Want To is incredibly drawn out, though, Isaac Hayes style. Richard Pryor brings some of his ground-breaking observational comedy to the stage for a few minutes. It is very much of its time but in 1972, its power cannot be underestimated.

The Emotions return with some sumptuous, sweet soul in So Can I Love You and Show Me How. The singers introduce themselves by name and star sign in true seventies style.

Little Milton's take on the Northern Soul classic Open The Door To Your Heart is a delight, with some great improvisation at the end, while Mel & Tim's Backfield In Motion is also really brassily appealing. I get the feeling that Southside Johnny would have loved this at the time. I love the duo's spoken bit at the song's climax too. Great stuff. 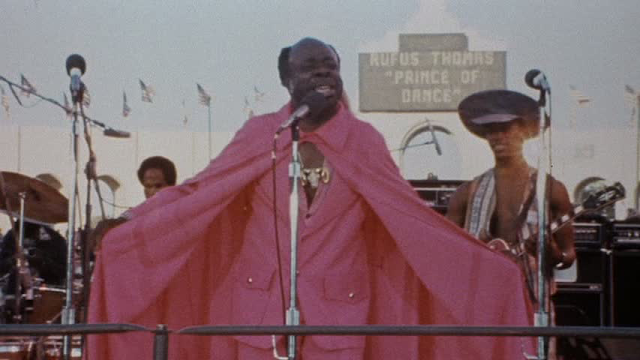 The bigger names of Stax are up next - Johnnie Taylor with the funky soul of Steal Away, legendary bluesman Albert King who gives us a searing, guitar-driven blues track in Killing Floor and Carla Thomas, who performs five songs, sounding a lot like Ronnie Spector, including her big hit B-A-B-Y before it is Rufus Thomas (pictured) time. Time to flap our wings and get all unnecessary. Yes it's The Funky Chicken. Up next is The Funky Penguin - not much different from the chicken, except I guess you shuffle as penguins can't flap their wings....

I Don't Know What The World Is Coming To from The Soul Children is a wonderful piece of uplifting, pulsating gospel/soul. So too is their Hearsay. Finally, Isaac Hayes takes to the stage. Unfortunately, you only get the one cut from him here - The Theme From Shaft. A pretty good choice, though.

*
I have supplemented this album by sourcing the missing tracks from elsewhere, but even without them, it is an excellent listen.
Email ThisBlogThis!Share to TwitterShare to FacebookShare to Pinterest