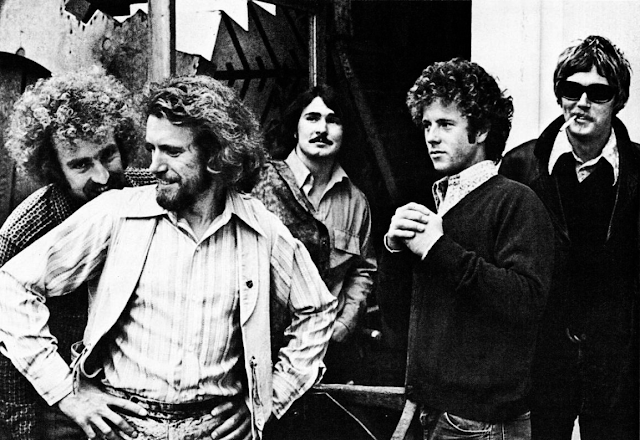 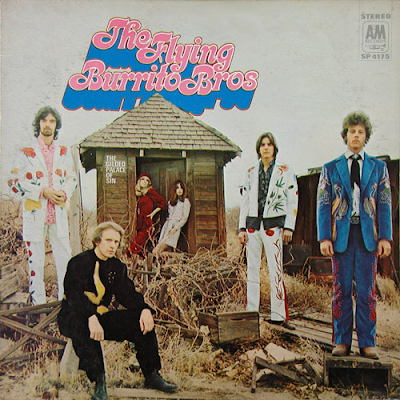 Christine's Tune/Sin City/Do Right Woman/Dark End Of The Street/My Uncle/Wheels/Juanita/Hot Burrito #1/Hot Burrito #2/Do You Know How It Feels/Hippie Boy
The "country rock" genre was ushered into fashion, amongst others, by Bob Dylan's John Wesley Harding and The Byrds' Sweetheart Of The Rodeo in 1968 and continued in May 1969 by Crosby, Stills and Nash. In February 1968, and comparatively unnoticed, was this album by ex-Sweetheart Of The Rodeo era Byrds member Gram Parsons' new group, The Flying Burrito Brothers. It is my favourite of that bunch of albums and has a subtle, warm-sounding ambience about it that I find most appealing. I have always had a bit of a weakness for The Rolling Stones' country-influence material (like Far Away Eyes) and Elvis Costello's Almost Blue. There is plenty of obvious influence on this album regarding both of those, including one actual song (Hot Burrito #1/I'm Your Toy) that Costello covered on that album.

It didn't sell well at the time, yet retrospectively it has gained considerable critical kudos and, as I said above, it has had a fair old influence. Bob Dylan, incidentally, said "boy I love them - their first record really knocked me out..." So there you go.

Christine's Tune has an early Beatles feel about it, you know, the sort of tune Ringo would have loved doing. It it carried out of its sixties feel, however, by some excellent fuzzy, buzzy rock guitar from Chris Hillman. Chris Ethridge's bass is superb on this and throughout the album - nice and full and "rubbery". 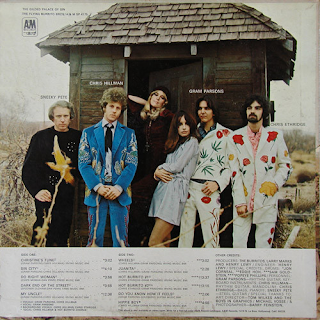 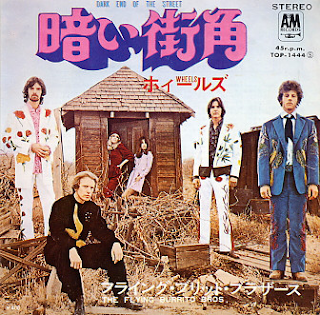 Sin City is a twangy, mournful but melodic piece of country. Elvis Costello no doubt loved this and it also really reminds me of The Stones' Far Away Eyes in its vocal refrain. I am sure Parsons' vocal was the country tone that Jagger tried to imitate.

Oddly, up next is a cover of Aretha Franklin's Atlantic soul classic Do Right Woman given a slow country makeover and with no gender-changes made to the lyrics. Listened to as a country song it is appealing, but compared to the original it doesn't quite stack up. Check out that lovely, sumptuous bass line, though.
Another cover is of James Carr's Dark End Of The Street. This one is the better of the two covers, with Parsons delivering a sensitive vocal over a stately piano, bass guitar and drums backing. 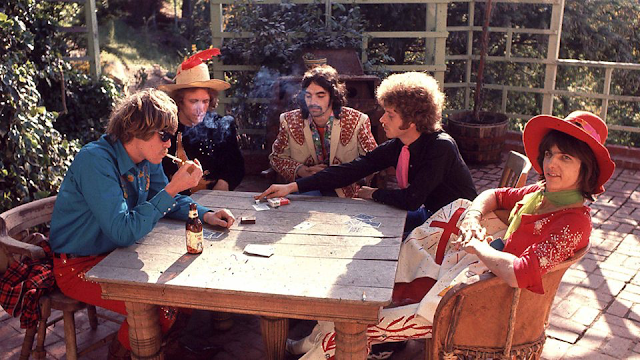 My Uncle is a finger-picking, lively number that hides a more sombre message about getting a letter from the military draft board ("Uncle Sam"). Parsons says he's off to Vancouver. I don't blame him.

Wheels is a fetching, slow country ballad enhanced by more of that buzzy guitar.
Juanita is another one that really reminds me of The Stones. I could really imagine Mick Jagger singing this. It could have come off Beggars' Banquet.

Hot Burrito #1/I'm Your Toy was covered very nicely by Elvis Costello on Almost Blue as I'm Your Toy, but this original is sublime, with an emotional vocal, great guitar and more of that peerless bass. It is the best track on the album, for me. Also impressive are the rockier tones of Hot Burrito #2 which has slight hints of Argent's Hold Your Head Up in its riff (maybe Rod Argent had been listening to this). It is the album's most "rock" number and again features that very early seventies buzzy guitar, like The Carpenters used on Goodbye To Love.

Do You Know How It Feels returns to the steel guitar and melodic piano of more traditional country. Hippie Boy is narrated by Chris Hillman, the words spoken over a slow country melody and describes counter-culture drug-dealing experiences going wrong (as far as I can make out). Apparently it is about the 1968 Chicago riots but I struggle to get that from the lyrics, but if they said it was, then it was.

Overall, I much prefer this to Sweetheart Of the Rodeo, for example, and to Dylan's Nashville Skyline too. It is one of the best examples of late sixties/early seventies country rock. 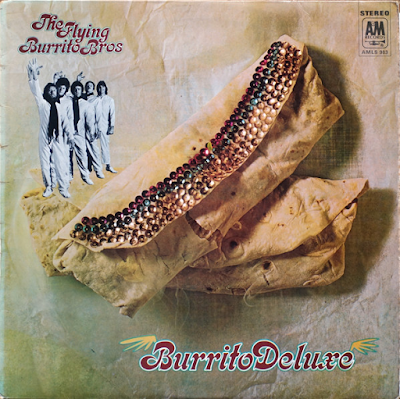 After an excellent, most appealing debut in 1969's The Gilded Palace Of Sin, Gram Parsons' country rock outfit returned with a more upbeat, rocking offering. Unfortunately, the group's impressive bassist Chris Ethridge had left the group, taking a great sound with him, and apparently the group were having problems coming up with material. New guitarist Bernie Leadon had this to say, retrospectively:-


"...We started getting together – Gram, Chris, and I – at the A&M lot and trying to write songs. We spent three or four months doing this. It was like pulling teeth. We knew the mechanics of writing music, but the stuff that we did were not Gram's best songs...."


"....After the brief initial burst Gram and I couldn't seem to hook up again. Burrito Deluxe was recorded without any of the feeling and the intensity of the first album...."

Reading that, you would imagine the album to be pretty poor, which it is not, it is not quite as good as the debut album. What it is, though, is far more rocking and more fun. It is not without its merits. The sound is not as good as one the first album, though, sounding just a bit "lo-fi" in places. 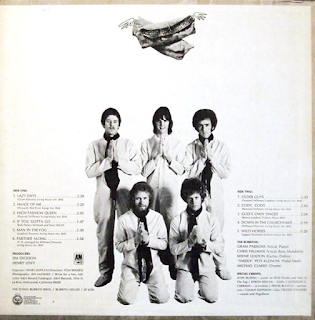 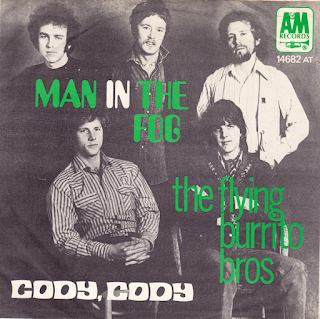 The album is notable in that the cover of The Rolling Stones' Wild Horses was the first recording of the song, a year before it appeared on Sticky Fingers. Apparently Keith Richards gave it to Parsons to record after a brief falling out, something that was unusual in that The Stones didn't make a habit of giving great songs like that away.

Lazy Days is a lively piece of pulsating bar-room style rock to start the album on an exciting note, with the band sounding like a country Dr. Feelgood, although country melancholia soon appears on the violin-backed mournful strains of Image Of Me. The latter is very much a continuation of the material from the first album.
High Fashion Queen is a steel guitar-driven fast slice of typical country rock. The vibrancy carries on in a rousing, frantic cover of Bob Dylan's If You Gotta Go, Go Now. It features some excellent rocking guitar. 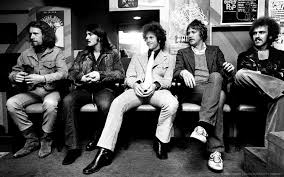 Man In the Fog is a Cajun-style romp powered along by some infectious accordion. Farther Along is a mid-paced, harmonious country take on a traditional gospel song.

Older Guys is one I really like - a pounding thumping number, while Cody, Cody has some nice harmonies on the vocals and a very Byrds-style sound.
God's Own Singer is a song in a more traditional lachrymose country vein. I'm sure Elvis Costello would have loved this one.

Down In The Churchyard is an energetic number that rocks infectiously throughout. Then there is Wild Horses. The country nature of the song is played up to the fore on this interpretation. It would seem that Mick Jagger based his delivery of the song very much on this one. Incidentally, Leon Russell plays piano on this, and on Man In The Fog.

Two months after the release of the album, Parsons was fired from the band he helped to create for drunkenness and general unreliability.