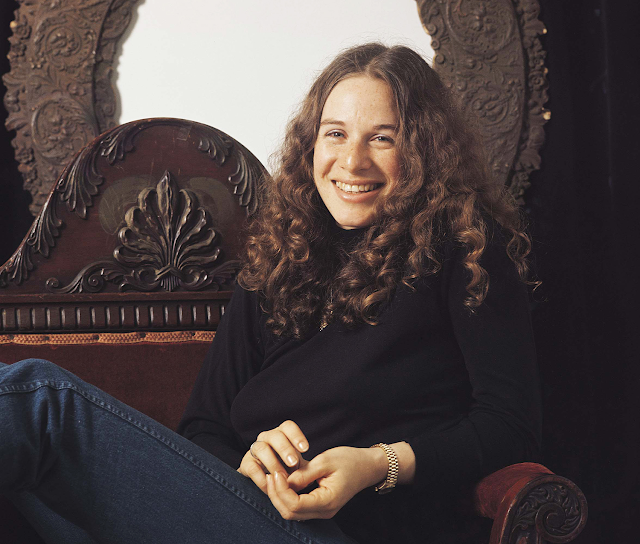 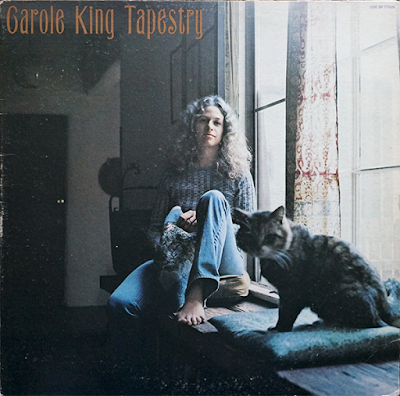 Leading the burgeoning female singer/songwriter boom in the early seventies was Carole King (already a veteran of many sixties hits, written with her ex, Gerry Goffin), with this album - one that could be found in the record collections of many female students throughout the seventies. It is one of the best selling albums of all time but, at the time, it was not an album my early teenage self was interested in but as many years have passed, so my tastes have matured.

A nice bit of trivia for you here - King's cat on the cover was called Telemachus.

I Feel The Earth Move. Contrary to the album's well-known laid-back ambience is the opener, which is a bit of a powerful piano, bas and drums-driven bluesy rocker. It is full of excellent guitar, bar-room piano and rumbling bass. It is a rousing rock start to the album.
So Far Away - reflective ballads are what the album is known for, however, and we get the first one in this attractive song. Like Bread's output from the same period, the album's rock sensibilities are greater than one may have presumed - the bass and drums on here are very slow rock in their sound and delivery. In a lot of ways this is far less of a wishy-washy bedsit album and far more of a slow, deep rock/soul one. It has surprised me over the years in that respect.

It's Too Late was album's first well-known classic is. Its deep, sumptuous backing is very, very similar to that used by Carly Simon on her No Secrets album from later in the same year. She had obviously been listening to this. It is a lovely bass/drum guitar/acoustic hook line and a similarly attractive tenor saxophone. King's vocal is beautifully melodic and ideally suited to a hot summer's afternoon.
Home Again is a slow, meaningful ballad, once more featuring that infectious bass, piano and drum backing. Billy Joel must also have listened to this a lot. It is so like some of his mid-seventies material, both lyrically and musically. There is also a bit of a slow country rock feeling to the song.
Beautiful is a quirky number that sounds a bit like a song from a musical. The lyric is uplifting and King addresses her listener personally. The piano is again superb, she really could play.

Way Over Yonder is a slow gospel-influenced number with impressive backing vocals from Merry ("Gimme Shelter") Clayton. Another good piece of saxophone is to be found on here.
You've Got A Friend was a big hit for James Taylor. Most people know it by now, especially the "winter, spring, summer or fall..." refrain. It is a song that can be instantly sung along with, whether you have this album or not. Long before I had this album, I knew this song. 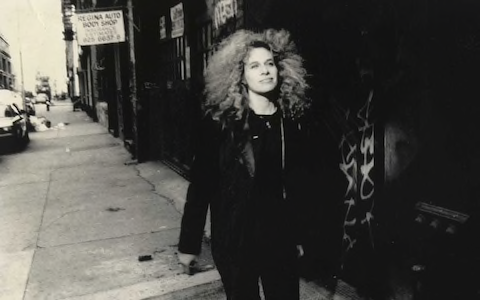 Where You Lead is almost Stax-y in its lively, deep soulful beat. It is one of the album's best examples of its unexpectedly soulful rock. Carole certainly had far more soul than she was sometimes given credit for.

Will You Love Me Tomorrow - next up is King's take on her sixties composition for The Shirelles. She does it in a much slowed-down way, turning into a piano-driven lament as opposed to the fairground-style early sixties Motown-ish rock'n'roll of the Shirelles' hit version of it.

Smackwater Jack is a delicious piece of lively, bassy blues, showing King's versatility again. It shows that Carole could rock and once more goes against the cliché that this is a light, airy-fairy, acoustic laid-back album.
In Tapestry we have a plaintive, thoughtful piano and vocal ballad that exemplifies the sort of material one may have thought the whole album was populated with. As it is, it is one of the album's few songs in this vein.
(You Make Me Feel Like A) Natural Woman - then there is this all-time classic. Of course, the definitive version is surely Aretha Franklin's one, but Carole King wrote it and here she sings it beautifully and with not a little soul herself. Great stuff. It has been remembered as one of the great songs of all time.

The latest remaster of the album gives it a nice, warm, bassy sound for probably the first time ever.