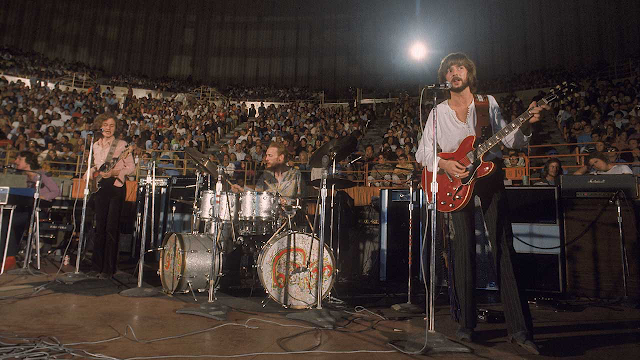 Blind Faith was a short-lived "supergroup" consisting of Eric Clapton and Ginger Baker from Cream and Steve Winwood from Traffic, with additional help from Rick Grech of Family....
Blind Faith (1969) 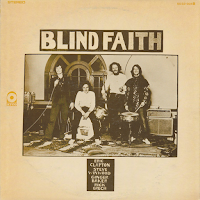 This was a short, six-track album of quality blues rock, as you would expect, that achieved notoriety for its original cover of a topless barely pubescent girl. Quite what the intention behind that was is unclear. It has since been replaced by a cover with a picture of the group on it (as shown here).

The group actually only lasted six months, yet this album was a critical success and remains highly thought of, often making "greatest albums of all time" lists. Funnily enough, although it is only forty-two minutes long, it seems much longer, probably because of the length of some of the songs.

Had To Cry Today is a chugging, Traffic-influenced mid-paced blues rock number. It features some solid bass and drums. Winwood's vocals just remind me of Traffic, unsurprisingly. This sounds very much like the sort of material that would have followed Traffic's eponymous second album. There is some excellent Clapton guitar soloing near the end. It sort of merges Traffic with Cream, which once again is no surprise. It has Traffic's soulfulness and Cream's deep power.
Can't Find My Way Home is an acoustically-driven folky song of the sort that Paul Weller or Ocean Colour Scene would do many, many years later. It is plaintively sung by Winwood. It taps in to the country-folk rock vibe of the later sixties-early seventies.
A lot of critics didn't have much time for the group's cover of Buddy Holly's Well All Right, which I find puzzling, as I love it. It is big, bassy, upbeat and bluesy. I always enjoy listening to it. It has a great heavy bit near the end - lots of organ, piano, organ and thumping drums.

Presence Of The Lord was possibly Eric Clapton's first great self-penned song and it is certainly an impressive one although I have always felt it suffered a bit from a muffled, undercooked sound. Although this latest remaster is finally an acceptable one after many very poor masterings of the album, no amount of tweaking can make it sound any clearer. However, when Clapton's guitars soars in towards the end I guess it doesn't really matter so much. It has been better over the years in Clapton's many live performances of it.
Sea Of Joy is an appealing, melodic track enhanced by some nice bass and organ. It is very Led Zeppelin-influenced, with Winwood doing his best Robert Plant. As with many folky blues rock songs of the period, it starts in laid-back style before getting heavier half way through. Rick Grech also contributes some superb electric violin on here. Do What You Like is a fifteen-minute monster of a track written by Ginger Baker and, although parts of it cater to that late sixties-early seventies creature, the drum solo, there are other appealing bits, particularly early on - a great rumbling bass sound, an insistent, vaguely funky rhythm and a far better sound quality than on Presence Of The Lord, for example. Although it has the obvious feel of a studio "jam" about it, it is certainly still enjoyable. Baker could drum, for sure. Take it for what it is, a child of its time, or just stop it after seven minutes!

I wouldn't say that this is one of the greatest albums of all time but it has something about it and it very representative of its era.


** There are several non-album tracks that have surfaced on the "deluxe edition". They are:-

Sleeping In The Ground is an upbeat, Clapton-driven slice of archetypal blues rock. I guess these days room would have been found for more of this material to be included on the album. It is livelier in ambience than most of the original album's songs. There bonus tracks also include a slowed-down blues version of the track, which is also impressive. Can't Find My Way Home (electric version). The acoustic number from the original is enhanced here with some buzzy Clapton guitar, to great effect as well. I think I prefer this version, actually. Something punchier about it. The guitar brings that to it. It is now a rock song as opposed to a folk-country rock song. Acoustic Jam is appealing enough, but it goes on for fifteen minutes and is only really worthy of a listen as background music while you're putting up a shelf or painting a room, let's be honest! Time Winds is a more urgent, lively feel is to be found on this organ-powered instrumental. There is some nice bass on it too.
Check out Eric Clapton's solo work here :- 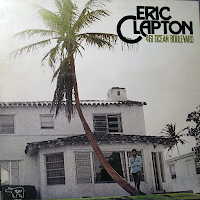