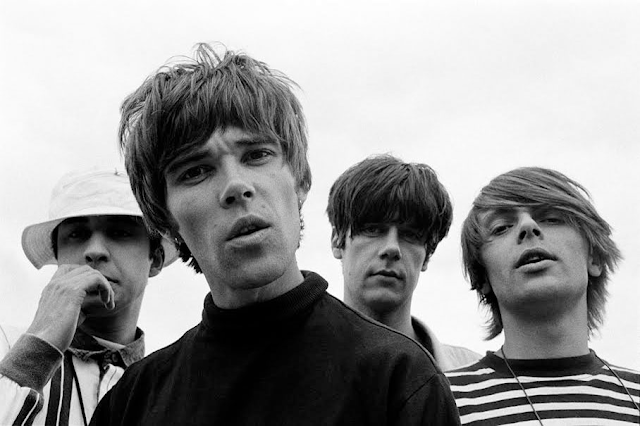 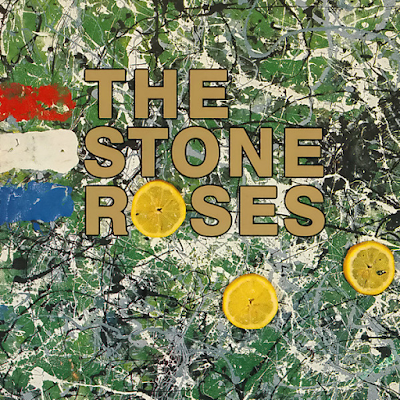 The Stone Roses are the band usually credited with being the leaders of the late eighties/early nineties "Madchester" scene, which merged traditional guitar rock with dance and rave music rhythms. As was usual with most of the bands from this genre, there was a sixties influence, particularly The Beatles and also psychedelic rock. This was a genre that emerged for the next generation on from me, so I am someone who looked at it quite dispassionately. I was certainly never a fan of dance music or "clubbing", that was after my time, so what I like about this album is that it far more of a rock album than a dance one. The sound is based a lot more around buzzy guitar riffs than programmed loops. The actually isn't much "dance" on here at all, compared to The Happy Mondays, for example.

The Stones Roses had an arrogance and confidence about them, similar to that of Oasis, but far less "in-your-face" and more cool and detached. They were a somewhat faceless group (comparatively), although singer Ian Brown had that Gallagher brothers attitude about him. The rear cover is a black and white image of the band looking very much like an updated version of Revolver-era Beatles. 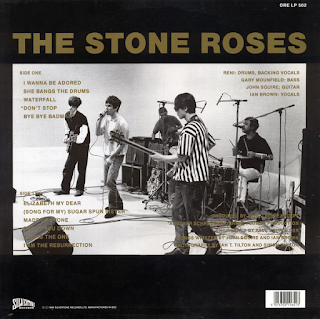 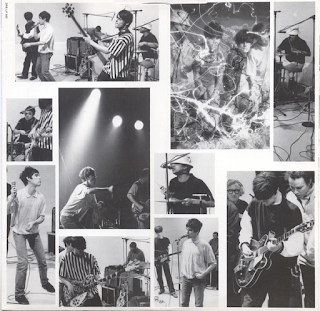 I Wanna Be Adored is a swirling pyschedelic-ish number, full of that afore-mentioned guitar sound. She Bangs The Drums is a very jangly, poppy and catchy upbeat song. Its vocal is very typical the sound of this genre. Impossible to describe, but instantly recognisable, in the same way that a new romantic, punk or post punk vocal was. Some of the riffs are very like those used by The Jam ten years earlier.

Waterfall is very appealing in its trebly but rhythmic harmoniously sixties way. The guitar/bass/drum interplay half way through is very seventies rock. It even uses a bit of funky wah-wah guitar. This is a good track. The drum are "proper" drums but they manage to convey a "dance"-ish vibe without the need to programme anything. Acid house was a neo-psychedelic, but musically artificial thing, but The Stone Roses managed to invoke its drugged-up bliss using conventional rock instruments. As the psychedelic bands of the late sixties did.

Don't Stop is a feedback and sound effect-drenched piece of psychedelia. This is a very 1966-67 Beatles-influenced number. The "from the top" spoken invocation is pure Lennon. It is the only track with a real dance vibe to it.
Bye Bye Badman is another very late sixties piece of upbeat but dreamy, wistful rock. Although there are contemporary sounds used throughout the album and there is a future-looking feel about the cockiness of the new "scene", it is also a totally retrospective album.
Elizabeth My Dear is a medieval-influenced, melodically acoustic condemnation of The Queen, quite for what purpose it serves is unclear. It doesn't fit the vibe of the album at all.

The good old sixties feel is well and truly back on the Pretty Flamingo riff-driven (Song For My) Sugar Spun Sister. The vocal harmonies, while retro, are also very typical of their era.

Made Of Stone is a great song, with a post punk feeling about it, albeit an upbeat one, and some excellent drums. Shoot You Down is a delicious, laid-back George Harrison-esque song, both musically and vocally. Its Beatles influences are so manifold there is almost little point in detailing them.

This Is The One is also riffily impressive, with a great, dramatic intro, reminiscent of Queen, would you believe, in its crashing cymbals. Singer Ian Brown's vocal is quietly vibrant, building the song up into the anthem it becomes. This is excellent stuff, sort of The Stone Roses' Baba O'Reilly.

I Am The Resurrection is an extended piece of Lennon-esque arrogance, backed with superb guitar and drums. Once again, the instrumental interplay in the middle is pure, great rock music of which Led Zeppelin would have been proud.
Fools Gold is an even longer track, clocking in at over nine minutes. It directly utilises the funky riff from James Brown's Funky Drummer. It gets into an insistent funk/rock groove, like something by Brown or Fela Kuti, interjected with fuzzy guitar stabs. It keeps in its rhythm, backed by some intoxicating rhythm and never gets tiresome. Stuff like this is really very impressive for a debut album.

This was one of the first of the "Madchester" albums that spawned Brit Pop, along with the first two Oasis albums, for me, it is undeniably the best. It is not an album constructed from tape loops and programmed drums, it is a rock album of high quality. 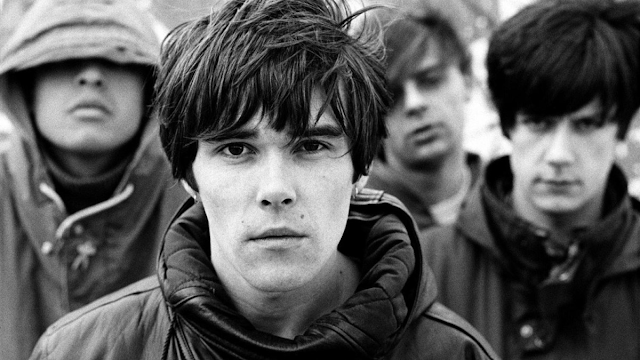 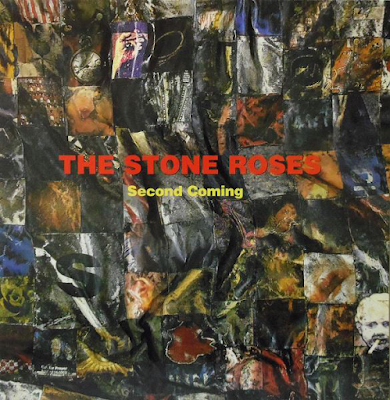 Breaking Into Heaven/Driving South/Ten Storey Love Song/Daybreak/Your Star Will Shine/Straight To The Man/Begging You/Tightrope/Good Times/Tears/How Do You Sleep/Love Spreads/The Foz
This second album was much-anticipated, much-delayed and eventually much-criticised. It was received by many as underwhelming. Coming from a generation before this genre, I was not a "proper" Stone Roses fan, so I just write about it as I hear it and I hear a reasonable album. The influence on the album, particularly on guitarist John Squire is from Led Zeppelin, as opposed to contemporary dance music, which is fine by me. This is far more of a rock album, and again, that totally suits me. It is a sprawling album, though, lasting sixty-six minutes. Listening to it all in one sitting is a bit of an ordeal.

Breaking Into Heaven begins with two minutes of ambient, watery noises before an insistent drum rhythm builds up, joined by some mysterious, scratchy guitar. It goes all Led Zeppelin-esque at one point around four minutes in and then a powerful drum beat and bass arrive and finally Ian Brown's understated vocals on five minutes. It could have lost a couple of minutes on the extended intro but you can't deny that it builds up an atmosphere as the song rumbles on infectiously. The bass is rumblingly sublime on here too.
Driving South has a heavy blues rock vibe but also a Happy Mondays-esque pounding Madchester one. It also has shades of Led Zeppelin in the Physical Graffiti era. I really like it.
Ten Storey Love Song has an infectious drum intro over some psychedelic guitar/Eastern influence before it breaks out into an anthemic grind. It is a real grower of a track and it segues neatly into the rhythmic groove of Daybreak, a track enhanced by some seriously funky bass. The bass/drum/organ interplay in the song's last third is superb.

Your Star Will Shine is a shorter, acoustic-driven, psychedelic, hippy-ish number. It sounds straight out of 1968. Straight To The Man is an appealing slice of funky, bassy contemporary rock, a really good track.
Begging You is the most "dance" track on the album thus far, full of those early-mid nineties frenetic drum sounds merged with buzzy, industrial guitars.
Tightrope is an acoustic, vaguely Oasis-ish number. Good Times is a muscular, solid and dense rocker full of searing riffage. 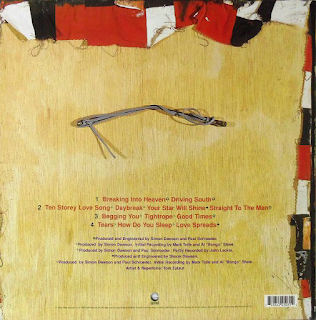 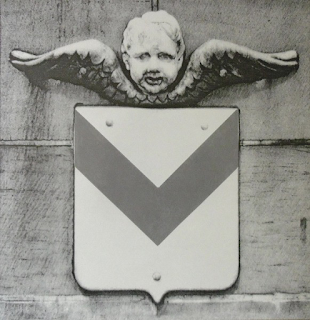 Tears uses the old Led Zeppelin trick of half acoustic/half rock on a slow burner of a song that bursts into life at 2:20. If it wasn't for Ian Brown's harsher, gruffer voice, you could really imagine this being Led Zeppelin, even the drumming is Bonham-esque. It also contains a Flamenco guitar solo, which is a Zep-style innovation. The otherwise attractively bassy and melodic How Do You Sleep begins with the line "I've seen your severed head in a banquet for the dead..." - very Alice Cooper. Musically, though, it is a tuneful Byrds-ish number with  nice vocals and guitar.
Love Spreads is a powerful, guitar-driven track with a fetching vocal/percussion break half way through that is almost jazzy and then there is the "hidden" one, The Foz. Basically, it is an indulgent, instrumental waste of time.

The album was nowhere near the disaster many claimed it to be, but, for me, it is far too long and it one I dip into every now and again only. Having said that, I've played it three times through over the last couple of days and it gets better with each listen, becoming quite addictive, so there you go. 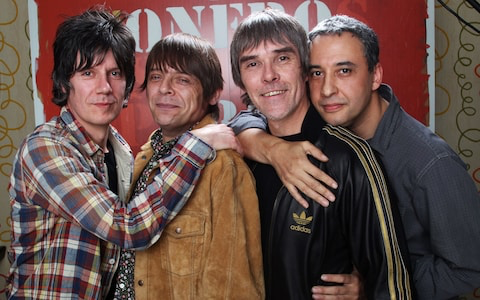