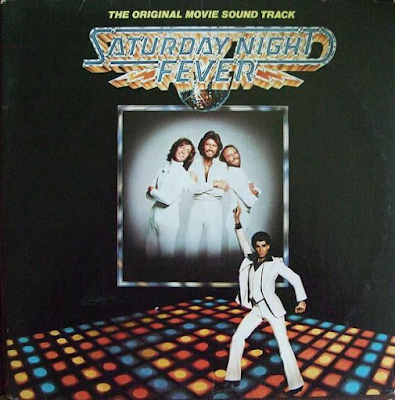 If you were around in late 1977/early 1978 this was everywhere. It was the time when everyone (supposedly) put on a wide lapelled jacket, or a flowery, flouncy dress with a pair of espadrilles and strutted their stuff, arms pointing in the air, under a glitter ball on a dance floor that lit up in multi-colours. Well, maybe some did. I didn't. Nevertheless, this is still a very nostalgic album and takes me right back to those days in an instant. It must have been culturally important because even I occasionally wore a jacket with those lapels and sported a blow-dried centre parting.

Musically, it was actually a bit of an unexpected creation. After all, disco was about hits from the likes of Van McCoy, Donna Summer, Labelle, The Trammps, KC & The Sunshine Band, Gloria Gaynor, Kool & The Gang and the like and was a sub-genre of black soul music. Its clubs were hedonistic poly-sexual fleshpots like New York's "Studio 54". This movie was about the way disco music enhanced the humdrum lives of New York's working class Italian community as opposed to that of bi-sexual drag queens. So, along came the, by 1976-77, comparatively forgotten white sixties pop balladeers The Bee Gees to suddenly find themselves crowned as the kings of disco. I remember at the time finding this somewhat odd. Admittedly they had dabbled in dance-ish sounds with their hits in 1975 (Jive Talkin') and in 1976 with You Should Be Dancing, but they were not the early choices for the film, originally titled Tribal Rites Of A Saturday Night.  John Travolta admits that he initially was dancing on set to Stevie Wonder and Boz Scaggs.


"....We were recording our new album in the north of France. And we'd written about and recorded about four or five songs for the new album when Stigwood rang from LA and said, "We're putting together this little film, low budget, called "Tribal Rites of a Saturday Night". Would you have any songs on hand?", and we said, "Look, we can't, we haven't any time to sit down and write for a film". We didn't know what it was about...." 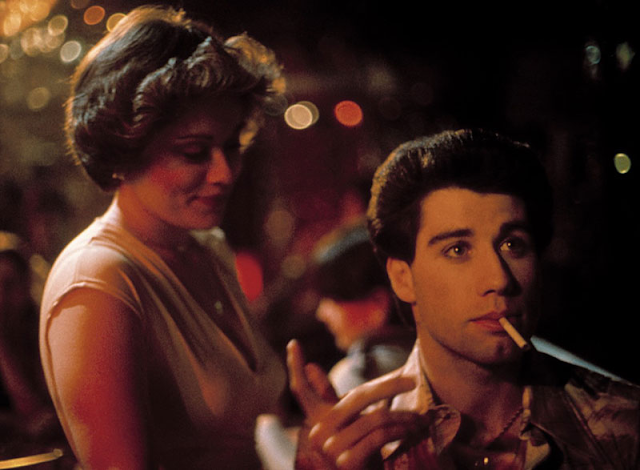 Anyway, they recorded their four classic songs for the album in a couple of days and also If I Can't Have You, the ballad which was eventually sung by Yvonne Elliman. One track was a beautiful ballad, the romantic  smoocher How Deep Is Your Love, one was a great soul track in More Than A Woman which was also done, even better, by soul group Tavares. Then there were the two "disco" corkers, driven along by that "chicka-chicka" guitar sound and made instantly recognisable by Barry Gibb's falsetto vocals, in Night Fever and Stayin' Alive. Remarkably, these white group attempts at disco became iconic representations of the genre for ever more. You have to admit, though, that they were totally infectious, irresistible numbers. The afore-mentioned, infectious disco funk of Jive Talkin' and the energetic You Should Be Dancing have even more of a groove about them. They are probably far more "disco" than the later material, especially the latter.

So there you have it, a disco classic was born in these few tracks alone. However, there is more to this album than just those great tracks. The extended disco instrumentals -  the funky A Fifth Of Beethoven, the very movie soundtrack-ish Manhattan Skyline, the intoxicatingly rhythmic Calypso Breakdown and the atmospheric Night on Disco Mountain are all quality, but show a different side to the disco genre. Whether this stuff would have been played in Studio 54 is debatable, though. David Shire's Salsation is a sort of samba jazz piece that sits a bit incongruously too.

A quick word about the film. It is anything but a feel-good dance movie. It is a bleak tale from which nobody comes out the other side feeling any happiness. The music, though, is just always so uplifting and plain, simple fun. Great days. Even for a punk. Just don't tell anyone.
Email ThisBlogThis!Share to TwitterShare to FacebookShare to Pinterest