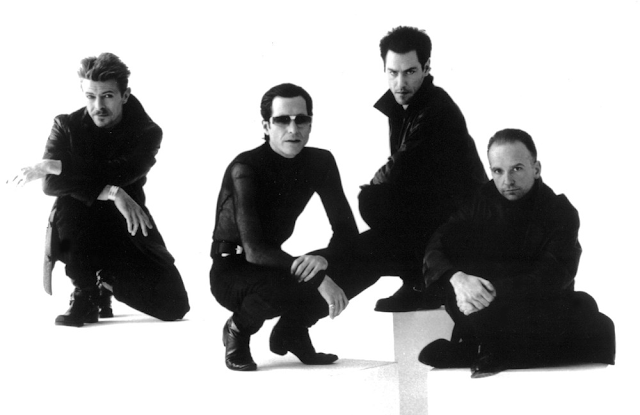 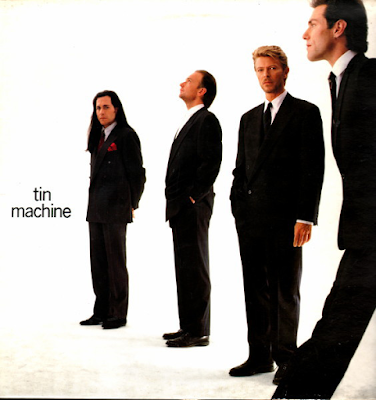 David Bowie’s 1989 Tin Machine experiment, where he formed a “democratic” band with guitarist Reeves Gabrels and the rather odd Sales brothers was roundly mocked and derided by the music media and fans alike, which is actually extremely unfair. The intention was to strip things down, become a “band”, as opposed to a David Bowie vehicle, and return to some raw, hard rocking, guitar-driven rock music. All good so far, nothing wrong with that. The problem came maybe because of the seemingly endlessly hype from Bowie about how glad he was “just to be one part of a democratic band” and how good it was to be back on the road again, playing small flea pits. Unfortunately it all seemed just a tad pretentious and it would have appeared to alienate a lot of people. “I love Bowie, anything but Tin Machine though” was an often heard statement at the time, and over the following years. To add to that, Bowie’s dress was downstated and drab and he was bearded. No costumes or new “character” guise.

What I feel, though, is if this album had been released as a standard David Bowie release, the media would have been awash with “return to form” and “Bowie returns to his rock roots” quotes. The album would have been said to put 1987’s Never Let Me Down to shame. The fact that was not given any credibility at all it such a pity. In retrospect, though, people have started to view it more kindly, realising that in its grunge sound, Bowie was again ahead of his time (Nirvana were still a struggling small venue band at the time). 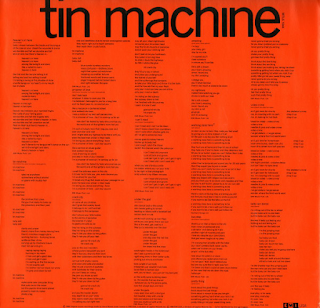 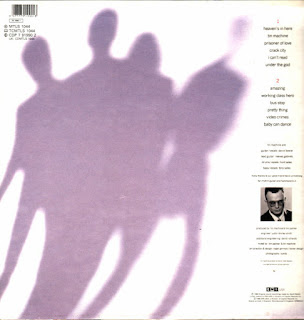 This is an excellent Bowie rock album, like The Man Who Sold The World, Ziggy Stardust and Aladdin Sane.

The opener, Heaven's In Here, is a impressive start, while Tin Machine is a frantic, punky piece of breakneck fun, with Bowie’s mockney vocals to the fore. Prisoner Of Love is as good a track as anything Bowie had done for several years.

Crack City is a mighty, powerful cut - again somewhat punky and grungy, all choppy guitars and nihilistic lyrics. It wouldn’t have sounded out of place on The Man Who Sold The World though. Bowie’s voice is on top form here. It is a sort of Diamond Dogs track for the late 1980s. 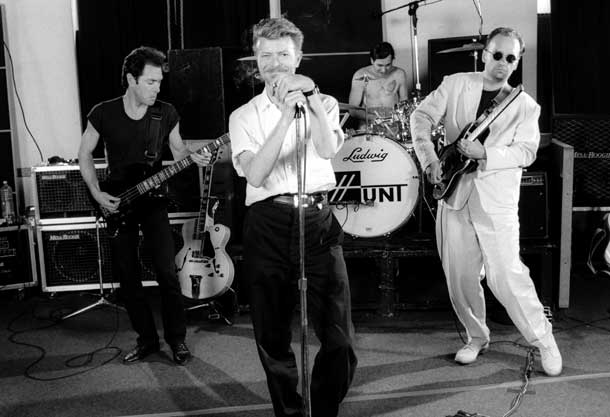 I Can't Read is a bit raucous and irritating, to be honest, although it has some understated bass lines in parts and some great guitar, but Under The God is another quality slice of urban guitar rock. This is another of the album’s cornerstones. It is an ear-splitting experience though.
Amazing is as close as it gets to a drop in intensity and has hints of 2013’s The Next Day album about it. Bowie’s cover of John Lennon’s Working Class Hero is excellent, turning the stark song into an insistent, menacing rock groove. Gabrels’ guitar is electrifying on this.

Bus Stop is another great track. How any Bowie fan could not get some enjoyment out of this is beyond me. The grunge attack continues with the remaining tracks to the end of the album and by now, it does get a bit exhausting. Listened to as a whole, all 14 tracks, it can get a bit jarring - the pace and the raw, pounding sound never lets up. There’s no Lady Grinning Soul, Soul Love or The Supermen to change the soundscape and ambience for a while. But a track or two here and there every now and again is a pleasure.
Listen to something like Pretty Thing as a one off and it is genuinely exhilarating. Or, alternatively, listen to the first seven or the last seven together, allowing more appreciation to the individual tracks, such as the excellent Run and Baby Can Dance from the last seven. 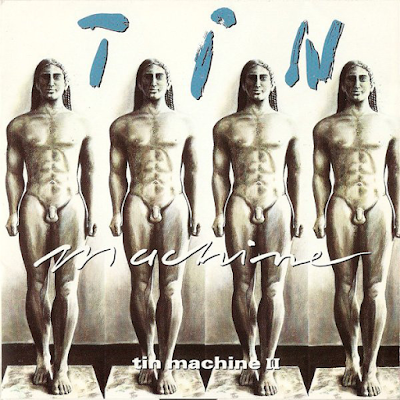 This was the second of the two Tin Machine studio albums, and has, unfortunately, largely been forgotten. This is a shame, because it is actually a really good album, full of solid rock songs. If anything, it is not quite as “in your face” as the debut album, containing more subtlety in places and less of the brash sonic assault. As with the first album, had this been released as a David Bowie album I am sure it would have been well-received, with praise along the lines of “look how Bowie has gone back to his rock roots here...”. As it was, Tin Machine tended to be treated with scorn, particularly by the media, which then filtered down to the public, who would come out with “Bowie’s ok, but what was Tin Machine all about?....” type of comments. As I said, this was a pity, because this is largely a good album.

So, on to it. Baby Universal is a pounding, catchy rocker to open with, featuring a big, rumbling bass line and some pounding drums. Bowie’s vocal is high in pitch but still copes with the power of the song.
The riffy, chunky rock of One Shot sounded very similar to The Rolling Stones' 1986 One Hit To The Body, remarkably so, in fact, but it has never been mentioned as far as I can see. To be fair, it is only on the chorus refrain, it is a much slower number than The Stones’ one. Reeves Gabrels contributes a fine guitar solo on this one and, once again, Bowie’s vocal is strong. In anyone’s book, this is a fine Bowie rocker. 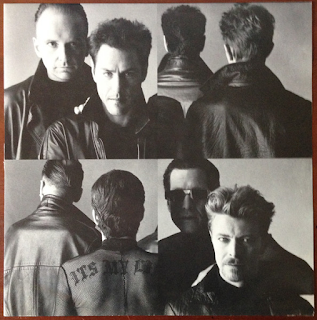 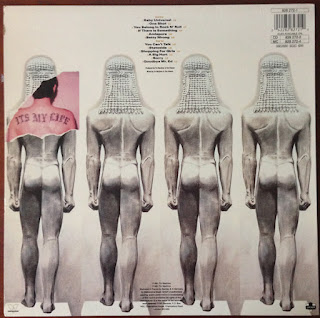 You Belong In Rock 'n' Roll is an infectious, understated rock song with some fine saxophone from Bowie near the end and a very nineties vocal, while the beefy cover of Roxy Music's If There Is Something is full-on and really impressive, Bowie even aping Bryan Ferry's vocal hiccuppiness at one point. The song is speeded up but it doesn't lose any of its appeal. Indeed, it sounds like a great Bowie original. I love the stripped-back bass, drums and vocal bit near the end, you know, the "when you were young" part. This is a bit of a never-mentioned Bowie gem.

Amlapura slows the pace down, a typically airy Bowie acoustic-driven number that could almost be off the Space Oddity album. There are lots of hints of Bowie’s 1969-70 work in there.
Betty Wrong (is that supposed to be a reverse of Betty Wright? If so, why?) is a muscular and once more enjoyably metronomic slow rocker. Nice guitar and drums driving it on.
You Can’t Talk has echoes of 1979’s African Night Flight from the Lodger album and a Look Back In Anger-style riff. It features some early dance rhythms of that sort that would appear on 1997’s Earthling. The searing guitar is very Adrian Belew-sounding too.

Stateside has drummer Hunt Sales on vocals and his voice grates a little, the track is also a bit of a clunker but Bowie joins in on vocals and saxophone half way through to redeem it somewhat. Reeves Gabrels delivers a beautifully out-of-control guitar solo as well.
The quality ups again on the very Bowie tones of Shopping For Girls, a track that would have been fine on Let’s Dance, Tonight or Never Let Me Down (admittedly this dates from several years later).
A Big Hurt is the album’s most upbeat, energetic rocker, full of infectious riffs, that finds Bowie sounding as if he is really enjoying himself.

Sorry again features Hunt Sales on vocals on a slightly dull, plodding rock ballad that never really gets going. Goodbye Mr. Ed ends the album in true Bowie fashion as electric and acoustic guitars merge with a bit of a new wave-style beat. It is a bit of a precursor for 2002's Slip Away, from the Heathen album.

This was a David Bowie album in all but name, and a very good one. 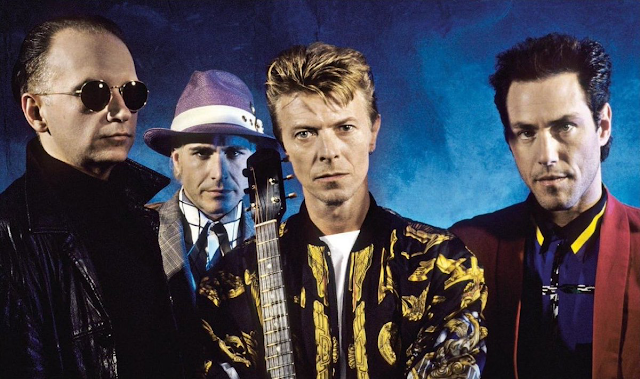