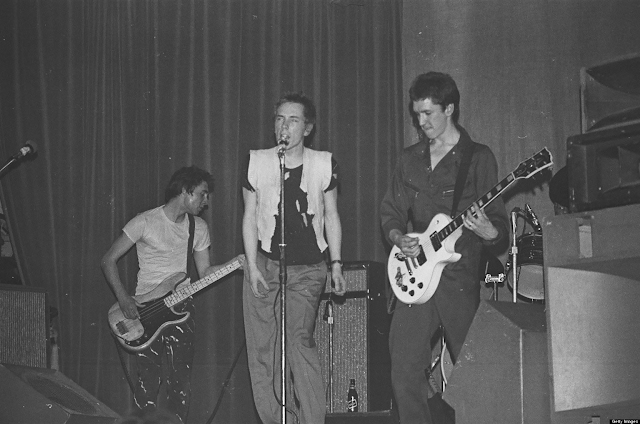 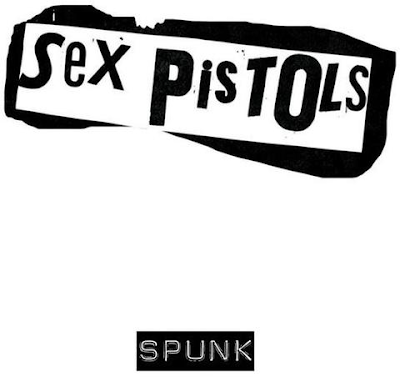 Spunk is an album of original Sex Pistols demo versions from mid to late 1976 and early 1977. They feature original bass player Glen Matlock and are produced by Dave Goodman.

In many respects, they are superior to the versions which eventually, after seemingly months of waiting, found their way on to the Never Mind The Bollocks album. Matlock's bass in infinitely superior to whoever ended up playing it (pretty damn sure it wasn’t Sid Vicious). Johnny Rotten’s vocals are much less “hammy” than on the eventual album and much deeper. The sound is fuller, punchier, more bassy and powerful and the songs have more rhythm and more of an authentic “punk” sound than the often heavier guitar-dominated material on some of the later recordings.

Feelings sounds great on here. A real punk classic. A great, rumbling bass line from Matlock and a real punk punch. The same applies to Seventeen, something more down and dirty and earthy about it.
Just Me is pretty rough and ready, with even a bit of T. Rex riffery in there, something that would not have appeared later. This sounds like proper punk, as it should have been, from sweaty basements. The eventual album sounded less so. This has an almost “live” feel to it. You can really feel the exuberance and vitality. Submission is powerful and menacing, again with some great bass. 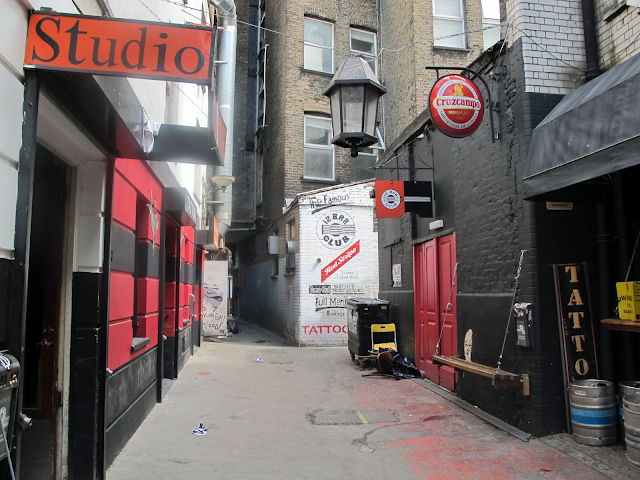 Anarchy In The UK or Nookie as it is called here, is not so good, a bit of a murky mess. Nowhere near as instant, clear or as hard-hitting as the eventual version.
The Denmark Street Demo, however, is marvellous. Clear, vibrant and full of attack. God Save The Queen/No Future is denser, bassier, punkier and just more “authentic” than the finished one. I love the raw punk power and deafening bass rumble of this one.
The same can be said about the seriously potent thump of Problems. Marvellous stuff. My floor is shaking! This is as good as The Sex Pistols got, in my opinion.

Pretty Vacant packs a similar punch, but it lacks that later killer intro, but it certainly has balls. Liar has a chaotic appeal, while EMI is another big, gutsy, pounding one. New York was always one of the most threatening, nasty punkers on the eventual album, and it sounds even better here.
No Fun sees Rotten’s voice getting slightly more into its affected tone in its full six glorious minutes. I thought punk songs has to be two minutes long? Not this one. It is an extended punk delight. 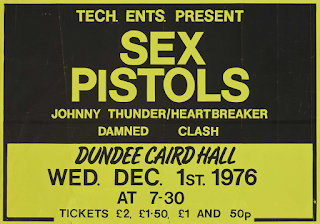 If you are a fan of the iconic album, you will love hearing this. 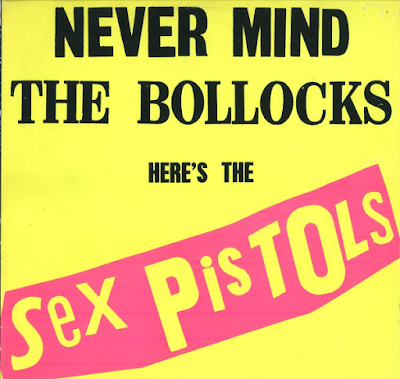 Holidays in The Sun/Bodies/No Feelings/Liar/God Save the Queen/Problems/Seventeen/Anarchy in The UK/Submission/Pretty Vacant/New York/EMI
There can be no under-estimating the seismic cultural effect of this thirty-odd minutes. I can remember to this day buying it, with its iconic yellow cover and “up yours” title plastered provocatively all over it. I was eighteen at the time. I brought the album home and left it defiantly on the kitchen table for my mother to see. Hoping for her to be suitably appalled, I returned to find that she just shrugged her shoulders and giggled. So much for my own little revolution.

Back to the album, its effect launched a hundred punk bands and generated a feeling among the young that they could question the established order of things, they did not need to be deferential to their elders and they could tell people to “fuck off” with impunity. “There’s no point in asking, you’ll get no reply..” Of course, real life was never really completely like that, but there was a change, for sure, however small, there really was, and a lot of it was down to this album. Was there ever a better album to be released when you were eighteen? Surely not. 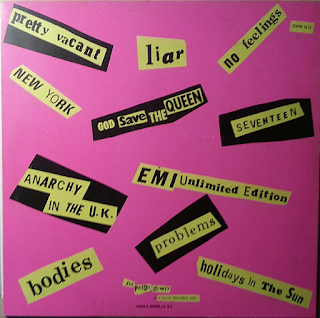 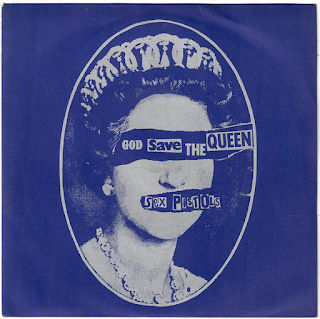 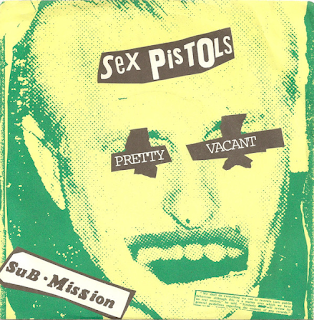 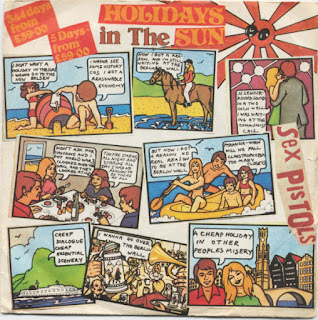 It was never my favourite punk album, however, lacking the upbeat vitality of debut albums by The Clash, The Ramones and The Jam. Some tracks are distinctly chugging - notably No Feelings, Liar and the bassy, menacing Submission. At times there are almost heavy rock riffs used, heaven forbid. Guitarist Steve Jones and drummer Paul Cook had stated, also, that in 1974, they had listened to Sparks’ Kimono My House every day. No Iggy Pop or The New York Dolls for them, then! These tracks, however, are all still relatively enjoyable, they certainly clear the cobwebs and the entire album is lifted sky high by the sneering, Dickensian vocals of Mr. Johnny Rotten. John Lydon (Rotten) carries almost half an album’s worth of unremarkable tracks by the sheer bleating, griping chutzpah of his delivery. Great stuff.
Just listen to how he injects life into a song like Problems or how he rants and rails in the vibrant punk of Seventeen or the glorious obscenity of the profanity-laden beauty that is Bodies.
Actually, I really like Submission. It is remastered superbly on the latest edition, big, booming and bassy. 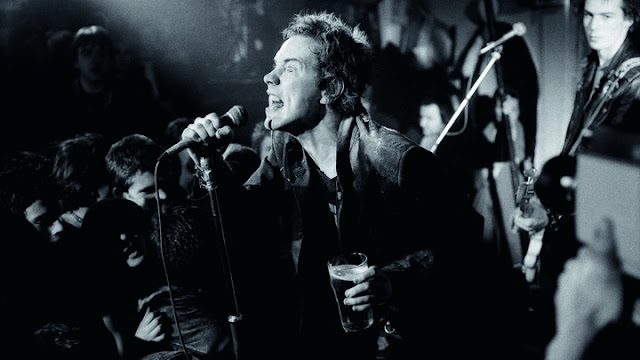 There are serious cornerstones on the album, though, and boy are they big ones. The sheer in your face two fingers of Anarchy In The UK, with its marvellous “I am an anti-Christ..” opening line that made one want to play it full volume in the University Christian Union coffee bar; the iconic, magnificent God Save The Queen with its kick posterior opening riff and deliciously disrespectful vocals; Pretty Vacant (emphasis on the final syllable is essential for the greatest effect) with its absolutely dog’s equipment of an intro (the best intro in punk, ever, along with The Ramones’ Blitzkreig Bop); the slowed-down riff borrowed from The Jam’s In The City that introduces the questionable taste of Holidays In The Sun and the fast-paced ranting, grudge-holding punk of EMI. These five tracks are all The Sex Pistols that anyone really needs.

Lest I forget, though, then there is New York - a brooding, undergound-ish grinding piece of heavy, nihilistic noise. A little mentioned moody classic in some ways.
** The “deluxe” edition includes the clunky, unremarkable Did You No Wrong, the magnificent, vitriolic, snarling No Fun and Satellite, which fits in with the tracks listed in the next paragraph.

Despite the lesser-known appeal of tracks like No Feelings, Liar, Submission, Problems and New York it is the others that get you clenching your fist, stabbing your finger, gritting your teeth and spitting out lyrics and hating every other person in the world, even now, for a few glorious minutes. 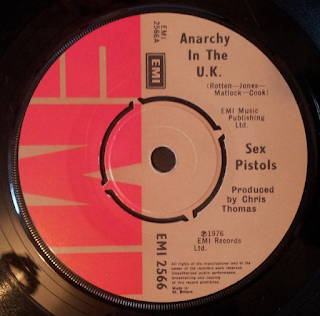 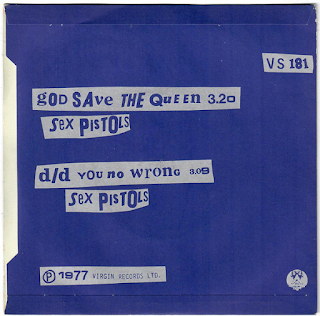