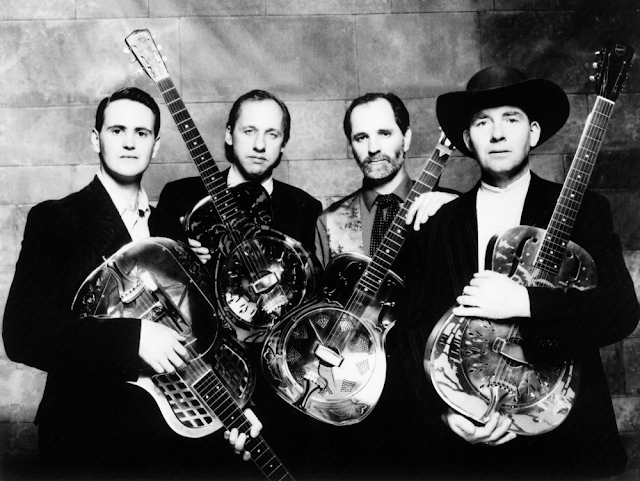 This was a country rock diversion for Mark Knopfler (at the time of Dire Straits, just about) and a most pleasant one it is too....
Missing...Presumed Having A Good Time (1990) 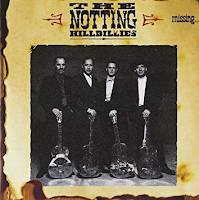 It certainly does not function as a vehicle for Knopfler in any way. Indeed, he often takes a backseat to the rest of his bandmates, particularly on vocals. This was the one and only album they did.

Railroad Working is a delightful piece of upbeat country blues of a song to start off, with hints of the sort of material Bruce Springsteen did on his Seeger Sessions album many years later. Bewildered is a nice bit of laid-back jazz-influenced blues, while Knopfler sings and adds some trademark bluesy guitar to Your Own Sweet Way. It is deliciously low tempo, its sleepiness being its appeal.
Run Me Down is a rockabilly-style jaunty number with some great stand up bass and guitar. One Way Gal is in the same vein. Blues Stay Away From Me is a peaceful, harmonious 1950s-sounding number. It is an old blues cover from that period, I believe. Will You Miss Me is quite Dire Straits-ish at the beginning and then it goes a bit Georgie Fame Hammond organ in its style before turning in to a full-blooded country blues rocker with some strong bluesy vocals and a big bass and drum sound. Please Baby is another gentle Nashville Skyline-style piece of country rock, even down to a Dylan-esque voice (of that period). Weapon Of Prayer is a meaningful, country lament with a gospel appeal in its lyrics. That's Where I Belong finishes the album with more Nashville Skyline vibes. Indeed, the album has been quite like that one in several ways. It is nothing ground-breaking, but it is a worthwhile half hour or so of a listen.
Oh hold on, I've forgotten about I Feel Like Going Home, which is a moving ballad finished off by some typically emotional Knopfler guitar. It is a beautiful track.
Check out Mark Knopfler's solo work here :- 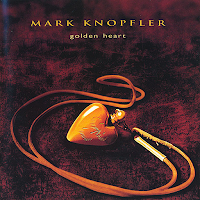