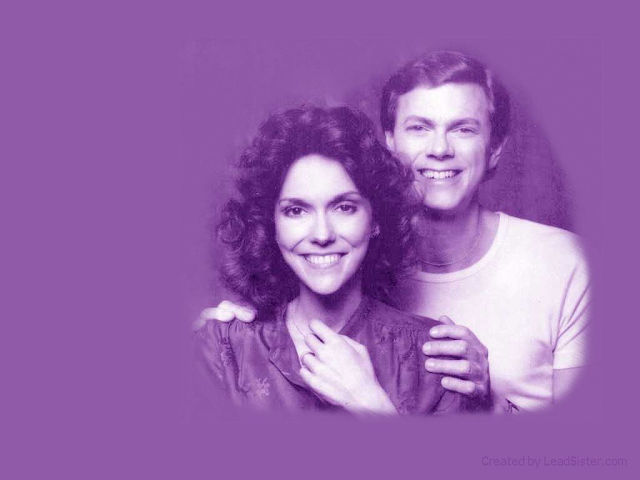 Am I embarrassed to include The Carpenters in my list of reviews? Hell no....
Carpenters Gold 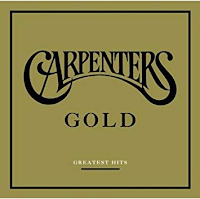 I always liked The Carpenters throughout the seventies even during my "punk years". I bought Goodbye To Love and Yesterday Once More as singles in the mid-seventies. I loved them then and I do now. So what. They're songs of the highest quality.

Yesterday Once More is lovely. A melodic, nostalgic lament for rock 'n' roll days gone by with Karen Carpenter's honeyed tones at their absolute finest. What is often forgotten, as her voice was so good, was that the instrumental backing on Carpenters records was always top notch, led by brother Richard. The sound quality on this compilation is simply superb. Lovely and bassy. Leon Russell and Bonnie Bramlett's Superstar is just gorgeous. The bass, the oboe backing, Karen's vocal, the build up of the plaintive verses and the glory of the chorus. Great stuff. Rainy Days And Mondays is another killer, with its Bacharach-sound melody and sumptuous saxophone solo.
Then there is Goodbye To Love, one of my favourite Carpenters songs of all time. No, make that one of my favourite songs of all time, by anybody. It is simply wonderful, building up through Karen's beautiful, evocative and haunting vocal to its cataclysmic climax in Tony Peluso's memorable fuzz guitar solo. He was urged by Richard Carpenter to turn it up loud and just run free with it. I think you can safely say he did just that. At 2.25 the drums kick in, the wonderful backing vocals take us higher then Tony appears at 2.48 and I am in air guitar heaven. If you don't get the urge to play air guitar during this there's something amiss.

There is some much more great material on here - I have always loved the goofy Cajun fun of Jambalaya and the cheesy Motown cover of Please Mr. Postman. I Won't Last Another Day Without You is heartbreakingly beautiful and Close To You is impossibly not to sing along to, Alan Partridge-style. Other beauties are the harmonious Only Yesterday, the lovely We've Only Just Begun and Neil Sedaka's plaintive Solitaire.
For All We Know has a delicious oboe intro and a simply infectious refrain. Even the schmaltzy Top Of The World has me singing along and Calling Occupants Of Interplanetary Craft is delightfully and incongruously bonkers. The Carpenters produced classy, high quality, moving and musically perfect pop songs. No argument.  This album is one pleasurable listen after another.
The Carpenters With The Royal Philharmonic Orchestra 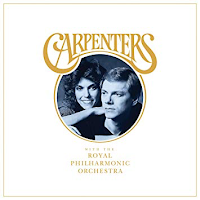 I have a slightly ambiguous relationship with these albums, which seem to be everywhere these days - Elvis, Buddy Holly, Roy Orbison, The Beach Boys....now The Carpenters. Half of me prefers to listen to the originals, which I consider to be the default recordings of the songs, but there is a part of me that enjoys these sonic experiments and finds them a most enjoyable listen.

The Carpenters' music would seem to be tailor-made for this type of makeover, as they were always brilliantly orchestrated anyway, like Buddy Holly's romantic (non rock 'n' roll) numbers. Therefore, songs like Yesterday Once More are not going to sound too dissimilar to the original, other than I have to say that the sound on this album is absolutely superb. Nice and warm and bassy, which is to my taste. There is a real fullness to the sound.

It is quite good that this is not simply a "greatest hits" album as well, and tracks like Hurting Each Other,  I Just Fall In Love Again (with it's Goodbye To Love guitar part), The Beatles' Baby It's You and I Believe You, among others, make an appearance. It is also a nice touch that before the vocals arrive on some of the tracks, you get an orchestral part with snatches of other tracks. For example, a bit of Rainy Days And Mondays floats around before Karen starts singing I Need To Be In Love. That didn't happen on the Buddy Holly album, for example. You get brief instrumental introductions to each song that gives the album a real continuity. (The Christmas track half way through only works in December, of course, you won't want it coming on in July!).

I have to admit to a weakness for the jazzy, laid-back tones of This Masquerade. It is done beautifully on here. Now - yes, yes, yes! They have left the iconic fuzz guitar solo at the end of Goodbye To Love! Plus some Beatles-esque French Horn (?) just before it enhances my favourite Carpenters track.

The album highlights just what a great voice Karen Carpenter had (as if anyone needed convincing) and I have to say that and what an instinct for a melody Richard Carpenter had. He conducts the orchestra throughout, apparently. Whatever one's musical taste or background, it is difficult not to accept that this music is sheer quality. I would have loved it if they had given the completely nutty Calling Occupants Of Interplanetary Craft an orchestral makeover though....