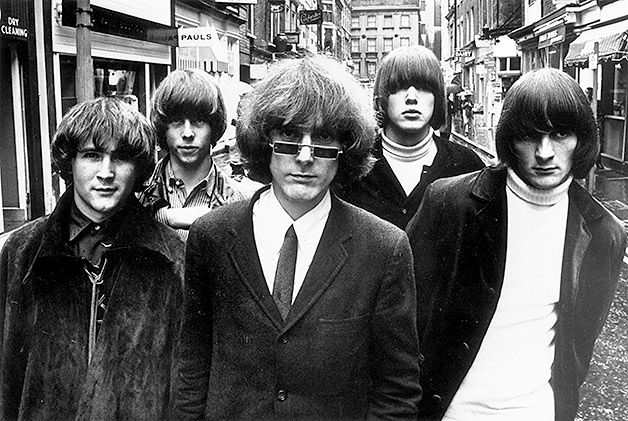 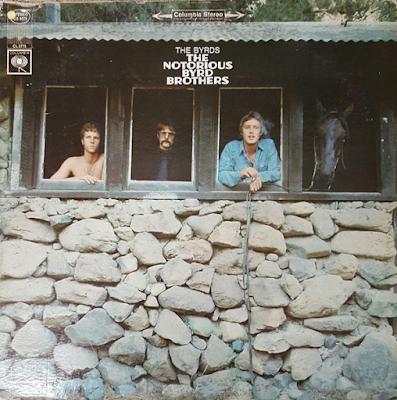 Artificial Energy/Goin' Back/Natural Harmony/Draft Morning/Wasn't Born To Follow/Get To You/Change Is Now/Old John Robertson/Tribal Gathering/Dolphin's Smile/Space Odyssey
This was seen as a “psychedelic album” from The Byrds. It certainly has tinges of that, for sure, but there are some reflective, folky passages in it too. Released in 1968, it was quite adventurous, instrumentally, being one of the first albums to use a Moog synthesiser, an instrument that would come to be really popular over the next few years.

The opener, Artificial Energy, is an upbeat hippy jazz/rock number with some typically late sixties lyrics and vocals and some bright, punchy brass parts.
The group’s cover of Carole King’s Goin' Back is beautiful and tranquil, very much in a Crosby, Stills & Nash mode. Light, melodic and airy. It was ironic that David Crosby was unceremoniously sacked during the recording of this album. He went off and produced a whole album very much like this. Relations within the band were incredibly strained, but, oddly, this cannot be detected on what sounds to be a very positive, unified album. 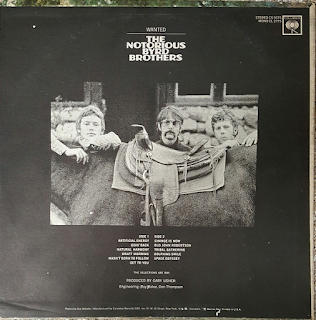 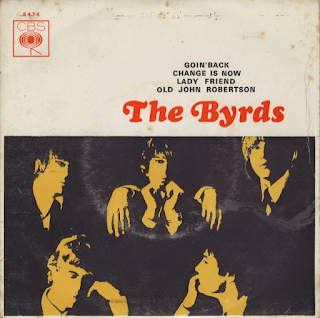 Natural Harmony has hints of Marrakesh Express in its livelier parts and other parts have airs of The Beatles’ and The Rolling Stones’ experiments with psychedelia the year before. The slow parts sound as if they come from Satanic Majesties. The percussion bits on the instrumental “bridges” are thoroughly  hypnotic.
Draft Morning is just sadly beautiful. Written at the time of the Vietnam War, it highlights a human rejection of that terrible conflict. So beautifully evocative and atmospheric. Some Beatles style brass sections and Ringo-influenced drumming accompany the “gunshot” parts. The bass is just sublime. The sound on all the album is very impressive.

Wasn't Born To Follow is an energising piece of psychedelic/country/folky rock, if that is such a thing. Steel guitar, captivating percussion, weird guitar and hippy lyrics. It is one of my favourite tracks on the album.
Get To You has more country and folk influences. Change Is Now has some more typical Byrds guitar and another swirling, light, harmonious Hippy-style trippy vocal. Again, though, a country style chorus breaks out featuring some steel guitar before we get a killer piece of electric guitar to remind us it is 1968.
Old John Robertson is a lively piece of country rock that sounds like something The Band would do a year or so later. Tribal Gathering is very late sixties Byrds, very hippy/trippy and ethereal, man. Some searing electric guitar slices through the bliss though.

Dolphin's Smile is also harmonious and beautifully sung, before once again going rock, with some powerful drums. Again, this is classic 1967-68 Byrds. So nostalgic and atmospheric. It is a bit too short, though.
Some buzzsaw guitar introduces the final track, Space Odyssey - guitars swirl all-around the track, together with eerie Moog noises and a feeling that this was definitely inspired by some of John Lennon’s work on The Beatles’ Revolver.

This was definitely an album of its era, but it was not totally psychedelic. There were several other influences at work in it too. 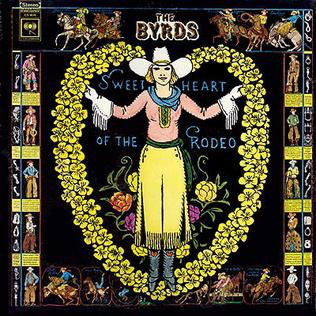 You Ain't Goin' Nowhere/I Am A Pilgrim/The Christian Life/You Don't Miss Your Water/You're Still On My Mind/Pretty Boy Floyd/Hickory Wind/One Hundred Years From Now/Blue Canadian Rockies/Life In Prison/Nothing Was Delivered/All I Have Are Memories/Reputation
1968’s Sweetheart Of The Rodeo was unique in that it was the first “country rock” album, (although Gram Parsons had done one before, The Byrds were a mainstream group). The Byrds’ previous album, The Notorious Byrd Brothers, had been a psychedelic album, typical of its era. This one completely broke the mould and threw it away. So, Bob Dylan’s 1969 Nashville Skyline was one that followed on in this album’s wake, as opposed to being a trail blazer itself. Gram Parsons had joined the band just before this was recorded and his influence is all over it. The album was a pure, essential country record and it resulted in tensions within the rest of the band and it was also rejected by the ultra-conservative country music establishment who, predictably, viewed The Byrds as long haired hippies who had no place in their beloved country music. The band infuriated fans at a concert at Nashville’s “Grand Ole Opry” due to their long hair and just a general resistance on the audience’s part to accept the band at all. 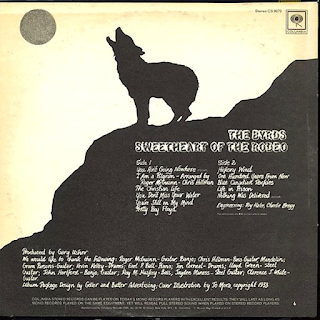 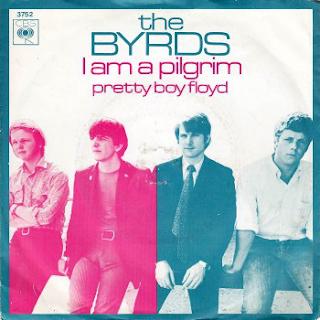 Back to the album, track by track, it is pretty difficult to analyse, as most of the tracks follow the lively, upbeat country formula, often with self-pitying lyrics about drinking, like the morose You're Still On My Mind.
You Don't Miss Your Water is a spiritual song in many ways and has a bit of an atmosphere to it, as indeed does the melodic opener, the cover of Bob Dylan’s You Aint Goin' Nowhere.
The cover of Woody Guthrie’s Pretty Boy Floyd is a country “story song” about an outlaw with some excellent finger pickin’ guitar and country fiddle.

Steel guitar is everywhere, and a track like Hickory Wind is pretty representative of the album’s material - harmonious, lyrically nostalgic and mid-paced. However, Parsons’ One Hundred Years From Now is probably the most punchy, rock-influenced of the tracks, brilliantly merging country styles with rock. 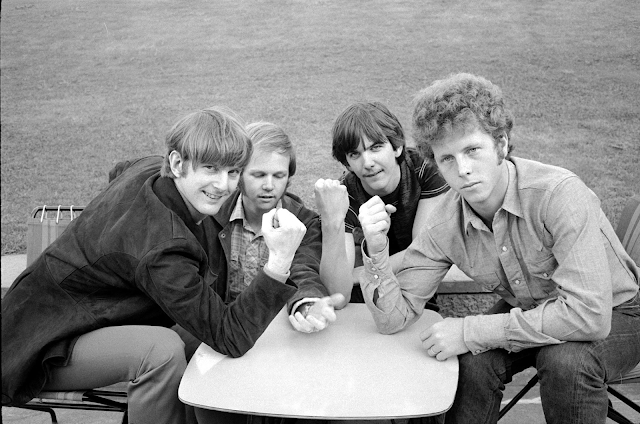 Blue Canadian Rockies is a more traditional country ballad, full of heartbreak for the singer’s girl. The way The Byrds approached this often cloying material was free of any condescension or taking the mickey. They were genuinely trying to make country music “cool, hip” and accessible to all. In retrospect they probably did a good job, as did Dylan, although he got far more criticism for it than they did. Just because he was Dylan, I guess.

Life In Prison was a typical maudlin self-pitying song as the title would suggest. The Christian Life is pretty awful, although it probably means a lot to many people, so I will not disrespect it. It is just not my thing.
Nothing Was Delivered is quite punchy, but again the almost deafening, whining steel guitar overrides the whole song. The gospel-flavoured (lyrically) I Am A Pilgrim is a banjo and violin mid-tempo country plodder, but not without an appeal.

The sound quality is impressive on the latest remaster, nice and clear with well-highlighted rich bass sound. However, regarding the album, while I applaud The Byrds in their wish to diversify and popularise a long-standing American music form, it really just doesn’t quite do it for me as a whole album.  Give me a few tracks at a time and that’s it. If I am going to listen to country rock from the era, I prefer Dylan’s efforts or Crosby, Stills and Nash’s more hippy-oriented efforts.

** Funnily enough, though, two of the “bonus” tracks on the extended edition, All I Have Are Memories and the powerful Reputation are far more rocky in feeling than the tracks on the album.

Pretty Polly is very like Dylan from his Good As I Been To You period. Lazy Days is good too, with a Chuck Berry riff to the fore. Again, I would have preferred this on the actual album. Proper country rock.
Gram Parsons' tracks from The International Submarine Band are great too. Digitally, of course you can mess around and be your own producer, making up your own album.


There Is A Season Box Set 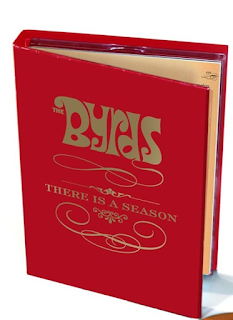 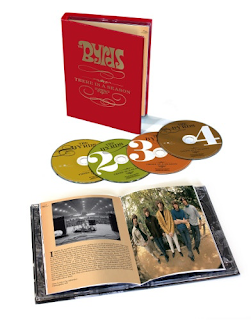 I am not a hard-core Byrds fan, therefore I do not feel the disappointment of many of those fans who wished to have more previously unreleased material on here. What I wanted was a career-spanning box set that covered the history of of this seminal band through their jangly pop, Dylan-Covering days, via psychedelia, to folk-rock and country-rock. That is what I have got in this excellent remaster box set.

All the great Dylan covers are here - Mr Tambourine Man (in many ways the definitive version of the song), All I Really Want To Do, the wonderful Chimes Of Freedom, It’s All Over Now Baby Blue, The Times They Are A-Changin’, My Back Pages, Lay Lady Lay, Positively 4th Street and It’s Alright Ma (I’m Only Bleeding). Although it may have seemed a bit odd that a band would send so much time covering another artist’s songs, you simply cannot argue that their versions of Dylan’s material often out-do the great man’s versions. That jangly guitar sound and those harmonious vocals just seemed to fit the songs perfectly. Just check out their effervescent version of The Times….

There are, of course, other highlights. My personal favourite is the evocative and melodious Turn! Turn! Turn!. Tracks like this just sum up much that was just so vibrant and life-affirming about music in the mid to late sixties. The Beatles-ish I’ll Feel A Whole lot Better is excellent too. The psychedelic instrumental Stranger In A Strange Land is atmospheric and reproduced here in superb stereo. Then there is the haunting, swirling, mysterious Eight Miles High with its iconic guitar riff and the other spacey stuff from the late sixties  - the Dylanesque, but not Dylan, of 5D (Fifth Dimension) and upbeat, harmonious Mr Spaceman.

So You Want To Be A Rock ’n’ Roll Star is just a superb, brooding rock song from the early seventies and the folk rock  that merged into country rock material has some gems too -  the melodious but fast-paced I See You, with more of that Eight Miles High guitar, He Was A Friend Of Mine, the hippy/trippy Renaissance Fair and Have You Seen Her Face. The folky  joy of the traditional Wild Mountain Thyme. The psychedelic rock of Was'nt Born To Follow. The mesmeric percussion on Dolphin's Smile.  All good stuff.

There is probably no escaping the fact that, as the box progresses, however, the sheer vibrant, vital exhilaration of those sixties songs dilutes somewhat. I do like the laid-back pleasures of the folk/country period, but you can’t beat the sheer energy of the mid sixties material. 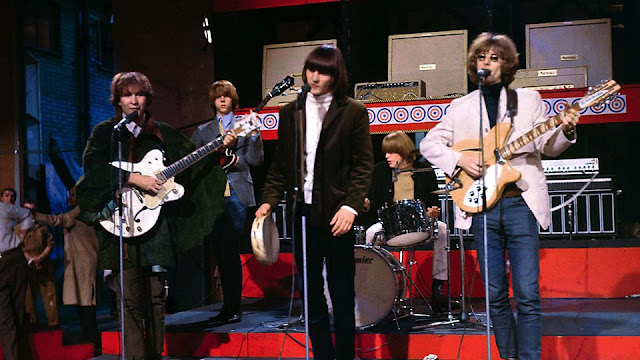