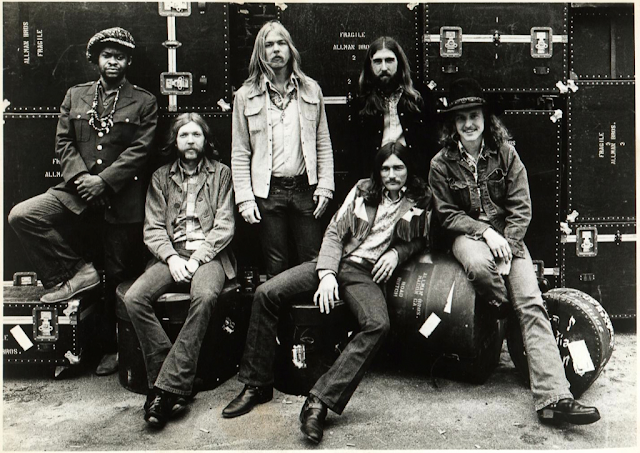 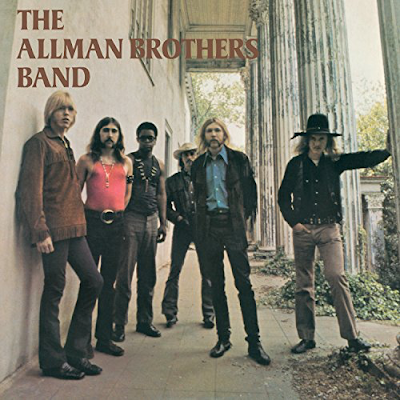 This was The Allman Brothers' debut album. It features the guitar talent of Duane Allman, who unfortunately died in a motorcycle crash in 1971. Basically, there is not too much that can be said extensively about it, except that it is blues rock of the absolute highest quality and this was material that paved the way for "Southern Rock" that the likes of Lynyrd Skynyrd followed so impressively later in the seventies. Mind you, influential as it clearly was, there are several bits of clear Jimi Hendrix influence on this, particularly in the riff on the magnificent, rocking Black Hearted Woman. Many of the tracks are extended and almost "jams" to be honest, and these days, this sort of thing can seem, to some, somewhat indulgent and dated. There is the dreaded drum solo in Black Hearted Woman, for example, but it is damn good one. The guitar, bass, drum and organ interplay on all the tracks is superb, effortless at times, almost like free jazz. They just feed instinctively off each other. It is almost telepathic in its understanding. Strangely for all its Southern roots, it was recorded in New York City.
Oh, and there is also one of the more bizarre cover images in that of the band all sitting naked in a creek. 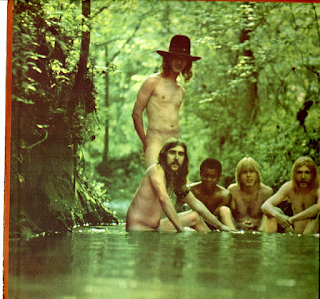 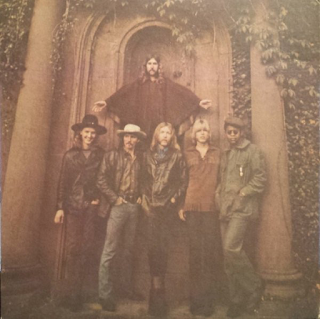 It's Not My Cross To Bear is a big, kick-ass, bassy bear of a blues. A great vocal from Gregg Allman that surely influenced Paul Rodgers of Free. Don't Want You No More has some very Santana-esque Latin-style percussion. Their first album was from the same year.
Trouble No More has a barnstorming riff that surely to goodness influenced Deep Purple. This is heavy, riffy blues rock at its absolute finest. The searing lead guitar parts are seriously exhilarating.
Every Hungry Woman owes something to Hendrix in places too. Dreams shows that they could do slightly more laid-back stuff too. There is a lot of Free in this one, and Led Zeppelin too.

Whipping Post was often grossly extended as a jam when played live. The version from At Fillmore East was twenty-three minutes long! It is a great song, though, quite bluesy and soulful in its vocal.

Basically this album is full-on electric blues, Yes, there are the slight tinges of the psychedelic era in those Hendrix riffs, but basically this is very much an early seventies blues rock album. There really isn't a bad song on it. The "deluxe edition" is the one to get hold of  - its sound is truly superb. Big, full and bassy. What other way is there. 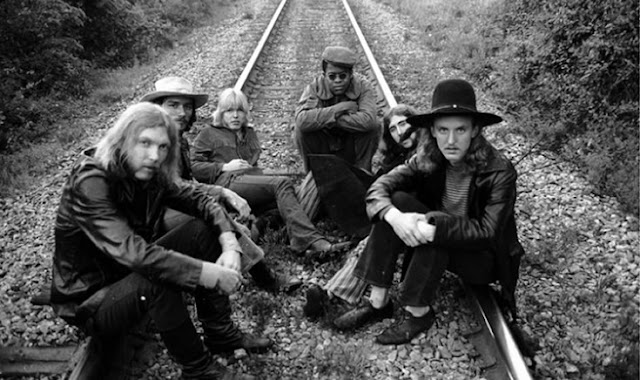 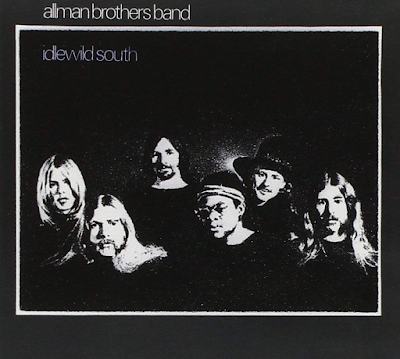 The second Allman Brothers Band album, and the last before the tragic loss of Duane Allman in 1971, is an absolute corker. Like their 1969 debut, it is blues rock of the highest quality, setting the standard for many other bands to follow. The sound quality on the "deluxe edition" remaster is outstanding.

It starts, unusually, with a jaunty, lively and impossibly catchy number, Revival, that has a superb, rhythmic Latin riff lifted, surely, from The Rascals' Good Lovin'. It is far more light in melody to the band's usual material.
Don't Keep Me Wonderin' is more the classic, chugging, bassy blues rock we have come to expect - full of great guitar licks. The slight influences of Hendrix-esque psychedelia that were present on the debut album are no longer here, it is more of a straight blues rock album (not that the debut was't either, to be honest).
Midnight Rider was a mid-seventies reggae hit for Paul Davidson. This is the swampy, laid-back bluesy original, and highly addictive it is too.
In Memory Of Elizabeth Reed is a masterpiece, with Santana-esque guitar jamming and definitive jazz influences. It often gets extended in concert way beyond its six minutes or so here.

Hoochie Coochie Man is, of course, a definitive blues number. The Allman Brothers turn it into a full on guitar jam, full of power and attack. Many bands have covered this, but this is one of the best, considerably speeded up from the usual covers, it rocks, big time.
Please Call Home is a laid-back blues, while Leave My Blues Alone is vibrant, upbeat one, with a great bass line and, as always some superb guitar. Another quality album. Highly recommended. 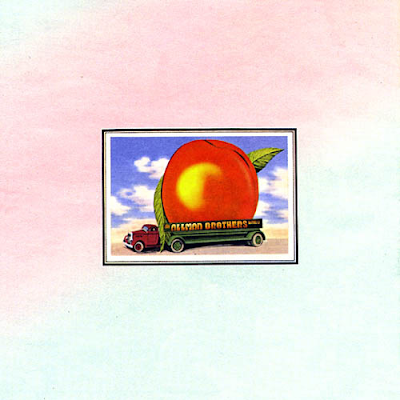 After Duane Allman’s tragic passing, this album was released in tribute to him. He features on all the tracks except the first three. It was a double album featuring both studio and live tracks. The latest remaster is by Suha Gur and is a good one, bearing in mind some of the tracks were live ones. It retains its nice seventies sound, something I always like.

Ain’t Wastin’ Time No More is a catchy, slide guitar, rumbling bass and crystal clear percussion-driven number. Unlike many Allman Brothers tracks, it is relatively concise - a perfect piece of early seventies Southern rock. I really like it. You can hear its influence in many subsequent groups’ output.
Les Brers In A Minor takes a few minutes to kick in, being initially buried in a haze of fuzz and feedback. After 3.45 it breaks out into a most infectious jazzy groove with more killer percussion and some excellent, melodic guitar. Check out that organ too. There was often a loose, jazzy feel to The Allmans’ work and that is certainly the case here. We get a drum solo too, a very rhythmic one as well.

Melissa, another shorter number with nice, laid-back vocals has an acoustic intro that is just like The Rolling Stones’ Wild Horses. It is a beautiful song, really relaxing and full of gentle ambience. The band should have included vocal tracks a lot more than they did. I find it also reminds me of some of Paul Weller's later more reflective material. Maybe that's just something I've picked up on, though. 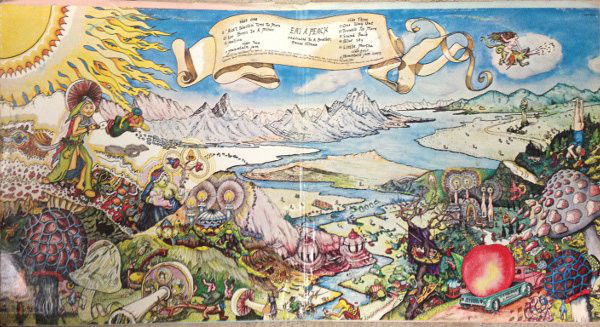 Now we come to the behemoth of the live cut, Mountain Jam. Weighing in at a whopping thirty-three minutes, it is longer than many whole albums and on the original double album it had to be split to cover two sides. Whether one can get through it is questionable, but there is a lovely sound on it throughout, plus some seriously good guitar. It is all so delightfully effortless, however. Put it on while you’re reading or doing something else and it’s fine. A someone who also likes classic three minute pop or soul songs, it is strange to enjoy this too, but I do, just as I enjoy when Fela Kuti gets into a groove and just keeps going. The vibe is a similar one. The drum work at fourteen and a half minutes or so is intoxicating. I had to pop out of the room for a minute or two, come back and he was still going. The drummer was Butch Trucks, never mentioned in any “great rock drummers” list, but this is some serious stick work. Trucks was the uncle of Derek Trucks of The Tedeschi Trucks Band, he sadly took his own life in 2017. 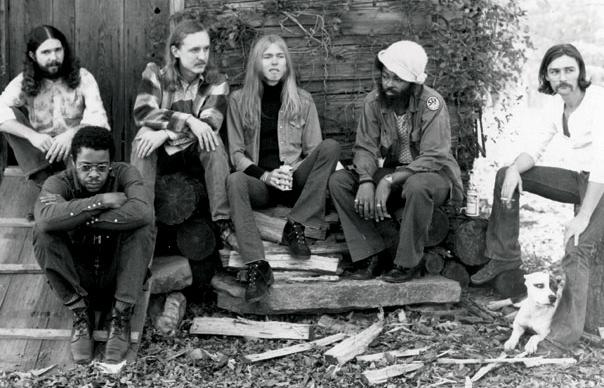 One Way Out is also live but ups the tempo on a shorter number, featuring some blues harmonica such as used on I Wish You Would by The Yardbirds and later David Bowie. The track rocks from beginning to end and has some more great guitar on it. The track was originally an Elmore James song.
Another live blues cover is the classic blues rock of Muddy Waters’ Trouble No More. This was The Allman Brothers at their blues rocking best.

Stand Back is a shorter, catchy rocker, while Blue Sky is a delicious serving of country rock. The album ends with the gentle, acoustic strains of Little Martha, another track that shows that this was not all extended jamming, there was a variety of styles on here within the basic blues rock framework. It is a great monster of an early seventies album. Proper blues rock. 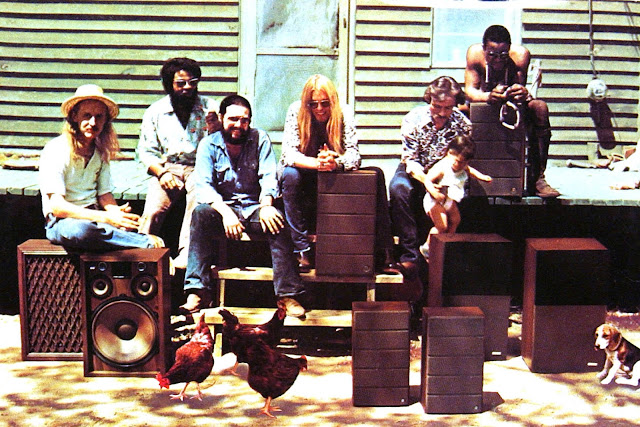 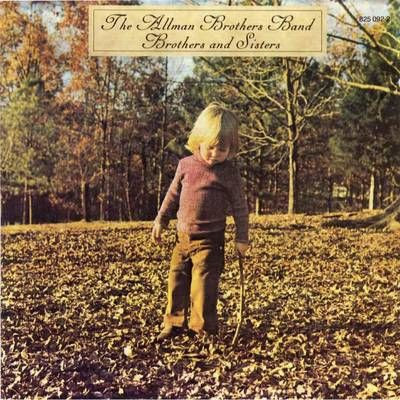 This album, the first to feature later to be Rolling Stones keyboardsman Chuck Leavell, was one blighted by deaths, drunkenness, drug abuse and inter-band arguments. All that considered, it rocks with a carefree vibrancy that is perhaps unexpected. It is more country-ish than blues in places too.

Come And Go Blues slows the tempo down somewhat on an appealingly shuffling heavy blues rock grinder that features some fine piano. Talking of the blues - Jelly Jelly goes the whole hog and delivers some grade 'A' walking pace, grumbling blues rock, punctuated by a killer guitar solo.

Southbound gets us back to rocking once more in a style that Eric Clapton would utilise many times over subsequent years. The lively instrumental Jessica was the album's second most popular track and is an attractive country rock groove in a sort of CSN(Y) style. Pony Boy (not the Bruce Springsteen song) is a jaunty, country serving of fun to end this album with, confirming that it was one that sounded happy, even though beneath the surface it was clearly not.