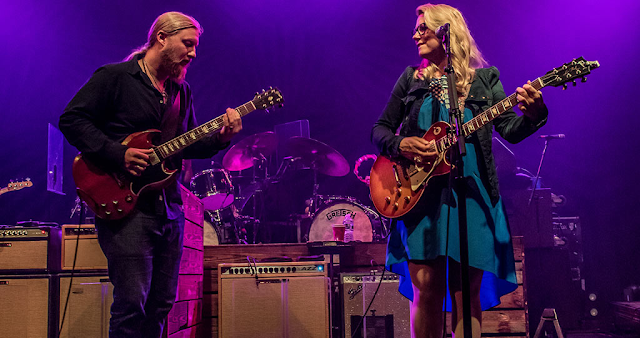 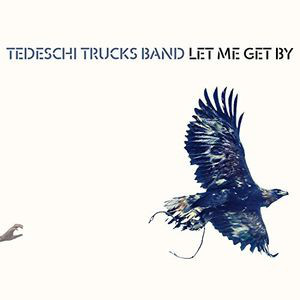 This is a very good album from the always outstanding outfit that is Derek Trucks, Susan Tedeschi and their band. It merges rock with soul, blues, funk, gospel, country and hints of World Music in a veritable cornucopia of sound. Susan Tedeschi's own material is more of a full-on blues rock attack. Although I like it, I have to say I prefer her with hubby Trucks on what are soulful, often horn-enhanced, uplifting albums.

Anyhow is a very appealing, catchy mid-pace soulful number with a lovely vocal from Susan Tedeschi. Great brass and guitar ending to it as well.
Laugh About It has a feel of Free about it. Susan's vocal is sensually gritty on this one, the bass and horns backing sublime.
Don't Know What It Means is solidly soul/rock-ish and it goes without saying that the vocal is good. Susan has a throaty effortlessness in her voice. She always sings her heart out yet at the same time doesn't overkill the delivery. On all the tracks, Susan also provides some killer guitar, as indeed does hubby Derek Trucks. 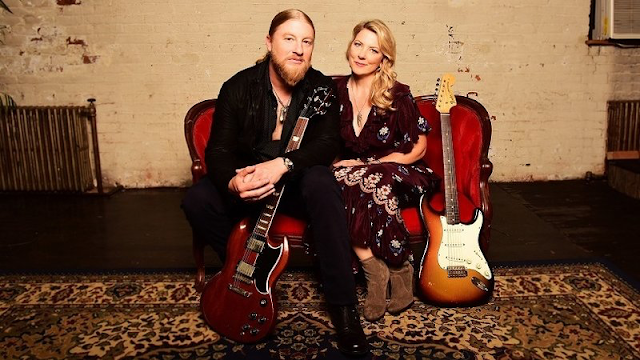 Time for a change of style now in the slightly nineteen-thirties-style brassy shuffle of Right On Time, with backing vocalist Mike Mattison sharing vocals with Susan.
Let Me Get By is a lively gospel blues with some funky organ swirling all through its centre.
Both Just As Strange and Crying Over You are uplifting, varied in style and most endearing. It is actually quite difficult to categorise these songs, they are soulful, rocky, slightly funky, brassy and inventive. That will do.

The instrumental bit at the end of Crying Over You is haunting, Indian in style and refreshingly creative.
Hear Me is a slice of seductive country blues rock. Lovely stuff. I Want More is seven minutes of pounding rock before it calms down half way through into some dreamy flute and guitar improvisation that has the band sounding like Santana in the mid-seventies.
In Every Heart is a soul meets gospel meets rock number to close this very impressive album. Recommended. 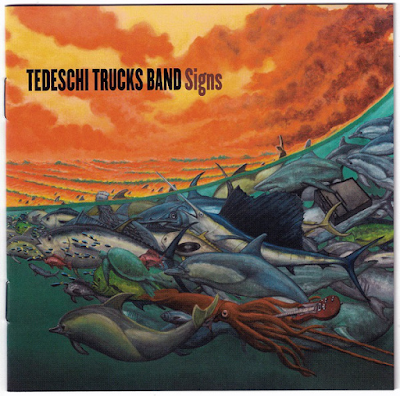 Signs, High Times/I'm Gonna Be There/When Will I Begin/Walk Through This Life/Strengthen What Remains/Still Your Mind/Hard Case/Shame/All The World/They Don't Shine/The Ending
I am familiar with several of Susan Tedeschi's albums, but this is the first I have heard of the four she has done with her hubby, the aptly-named (for such truckstop blues fare) Derek Trucks, who has played guitar for a later incarnation of The Allman Brothers Band. There will be other reviewers who are familiar with their earlier albums and are able to compare this one with those. I am, at present, only able to comment on this one, so my comments are from a slightly uninformed viewpoint. To me, it is an impressive, invigorating mix of blues, soul, rock with a few funky bits thrown in.

Signs, High Times is a horn-driven punchy blues rocker with Susan taking vocals in typical gritty style and three other singers taking vocal parts. Susan's voice is by far the best.
I'm Gonna Be There is a country-ish slow burner with a soulful, gospelly vocal from Susan and some killer guitar at the end.
When Will I Begin continues in the same soulful mode, while Walk Through This Life has an absolutely sumptuous, irresistible bass line underpinning it. The horns are once more upbeat and muscular, as, of course is Susan's voice. There is a superb bass/drum/guitar funky-ish break on this track. 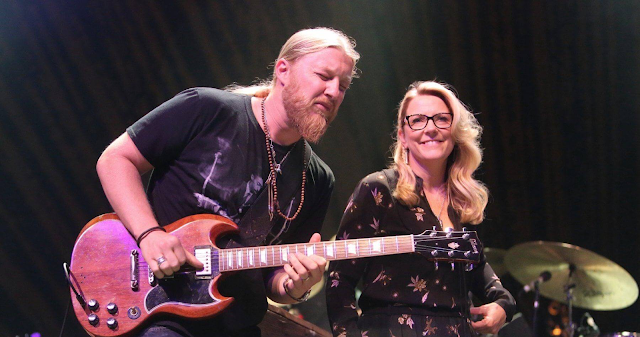 Strengthen What Remains is a fetching, quiet, non-blues rock number - a nice piece of country rock balladry.
Still Your Mind has, for me, some hints of sixties baroque psychedelic rock beneath the surface. There is an intoxicating feel to its staccato rhythm.
Hard Case has a funky undertone to it and also features some enticing wah-wah guitar parts.
Shame finds Susan delivering a solid soul vocal, sounding almost like Stax legend Mavis Staples at times. It is a perfect mix of powerful rock and gospelly soul, something this band appear to do quite well.

All The World sounds like an Otis Redding ballad. The vocal is again delivered perfectly. They Don't Shine comes blasting out of your speakers with a real Stax punch. Great stuff. You can't go far wrong with this. It kicks your rear end.
The Ending is a sparse, acoustic number with Susan on top vocal form in a tribute to the band's mentor, Bruce Hampton, who passed away in 2018. I didn't know this initially. It makes it sound all the more poignant. Good album.